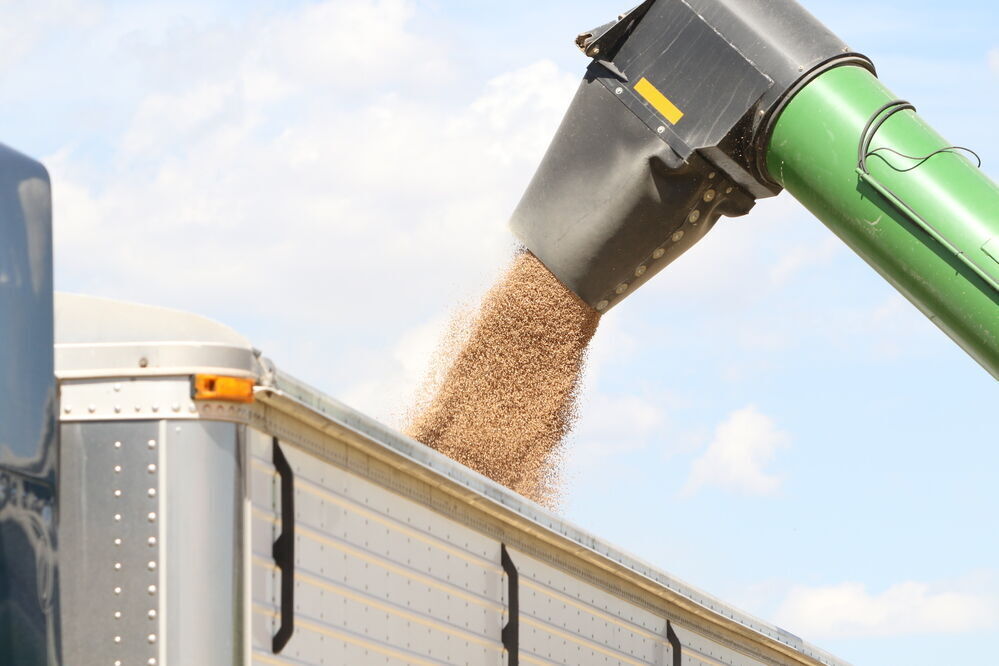 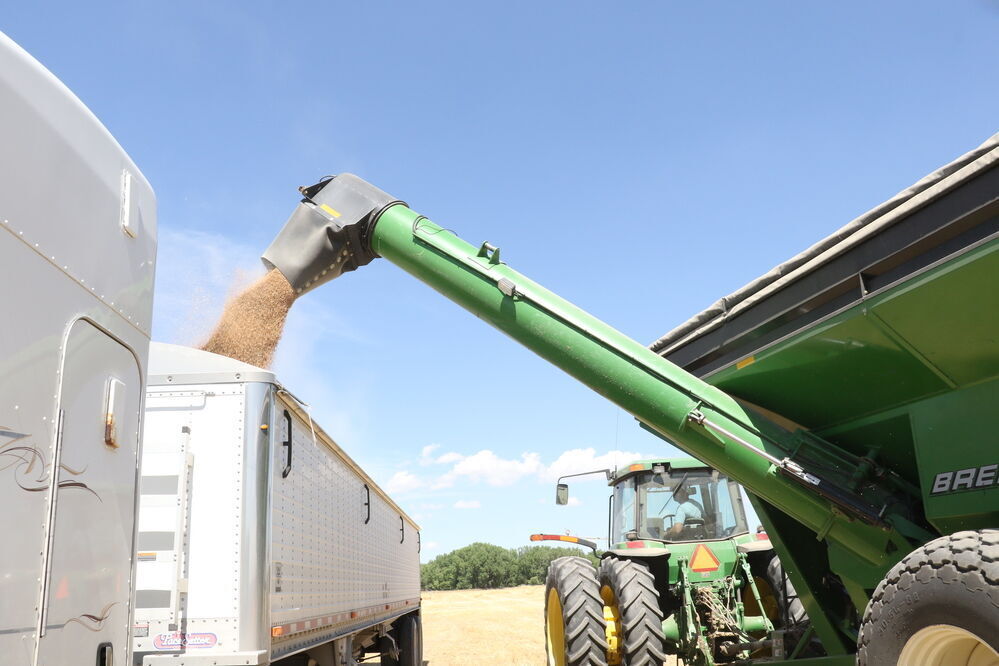 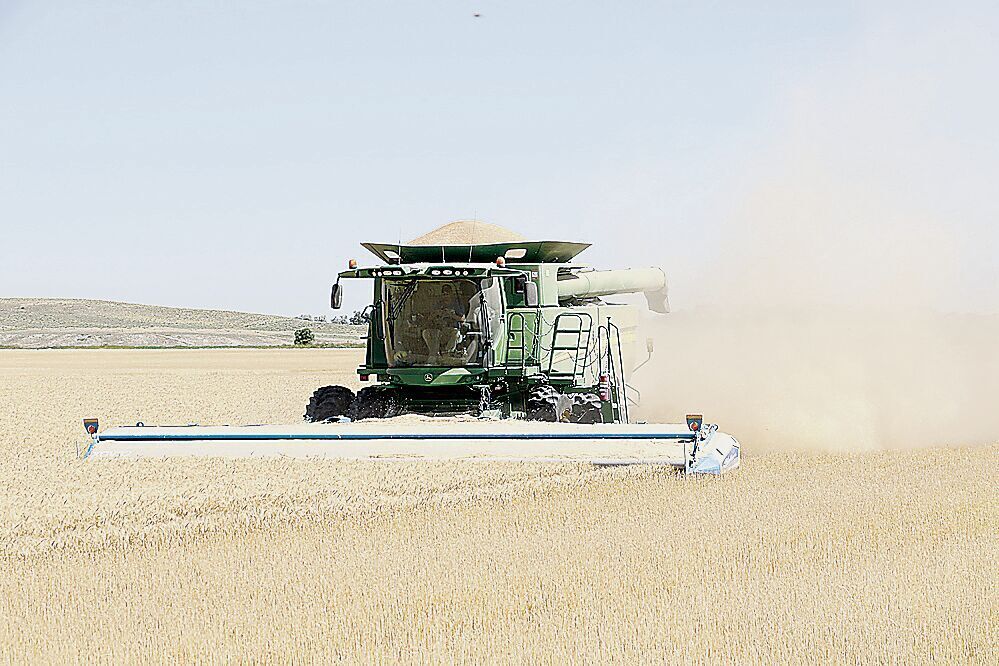 According to the USDA, winter wheat harvest reaches 50% completion in Nebraska, following a growing season of weather variability, resulting in what experts say is average yield numbers between 15-80 bushels per acre across the state.

“This past fall, producers planted 920,000 acres of wheat, though only 850,000 are expected to be harvested. The USDA predicts Nebraska’s wheat crop production to reach 40.8 million bushels, which is a 26 percent decrease from the 2019 crop. (USDA, 2020),” according to the Nebraska Wheat Board.

Nebraska Wheat Board Executive Director, Royce Schaneman said, damage from late frosts and variable drought conditions throughout the state have contributed to this years wheat crop facing a variety of crop stress levels, therefor, resulting in a wide range of yield numbers and protein values throughout regions across the state.

Goshen County grower, Levi Umble said, in comparison to last year, this years yield and test weights have been above average on his 300 acres of irrigated winter wheat ground.

Umble said, he attributes higher yield numbers to high temperatures throughout the growing season, and adequate irrigation water use.

“In comparison to last year, our test weight is higher, the protein level is lower, but our yield is higher,” Umble said.

Regions of eastern Wyoming and the panhandle have experienced production consistencies in terms of yield numbers, which producers are reporting to be average or slightly above average.

“Currently, the region (the northern panhandle) has harvested around 20% of their crop with things really starting to gear up towards the end of the week,” according to the Nebraska Wheat Board.

John Thomas, UNL crops extension educator, located in Box Butte County said, at the current early stages of harvest in the northern panhandle, growers are reporting this years yield numbers to be slightly above average.

“Averaging 40 to 50 bushel per acre, is not great, but its a pretty decent yield for an average, so it means your getting some (wheat) coming in significantly above that number as well,” Thomas said, “The quality has been pretty good, an average about 61 pounds per bushel and protein probably reaching numbers of 9-13%.”

According to the Nebraska Wheat Board, farmers in the northern panhandle are fairing well, with test weights near 61 pounds, and protein at 11%.

Thomas said, although wheat stem sawfly damage has had a presence across the panhandle, he said it is not something that has completely wiped out the crop.

According to the wheat board, a grower in the southern panhandle has reported this years sawfly damage to be the worst he has experienced, with some reports of 5-15 bushels per acre of wheat destroyed by the pest.

Regardless of pest issues, Thomas said, overall average yield numbers are not low, and its looking to be a decent year of production across the panhandle.

“Farmers in the region (southern panhandle) are bringing in average yields of 45 bushels an acre with the test weights between 60-62 pounds and protein averaging 11%,” according to the wheat board.

In terms of the panhandle as a whole, protein and kernel size of this years wheat crop is looking extremely different and possibly better than what is seen in the southern most parts of the state.

Schaneman said, the southern most areas of the state, experienced high temperatures and dry conditions which has contributed to a crop near the southern border with higher protein percentages and smaller kernel size.

According to the wheat board, the southern border of the state is averaging yields between 15-80 bushels per acre, test weights between 55-64 pounds and protein levels ranging between 9-14%.

“The hot, dry and windy days played a large role in the development of the crop throughout this summer, causing there to be some shrinkage in kernel size and an overall lack of moisture needed for good growth,” the wheat board reports.

Drought stress in the southern region of the state contributed a higher protein content, but possibly dockage caused by low test weight may offset the premiums from protein levels.

The remaining harvest across the northern parts of the panhandle is moving at a fast pace, Thomas said, harvest conditions this year have been favorable due to the higher temperatures and the lack of moisture.

The wheat board reports 20% of wheat in the northern panhandle to be harvested and this years harvest moving quick, the state should be wrapping up winter wheat harvest in the next couple of weeks.

Carriker Chronicles: What if all conferences can't play college football this fall?

Carriker Chronicles: What if all conferences can't play college football this fall?

Pick Six Podcast: What will college football look like this fall and Nebraska recruiting updates

Pick Six Podcast: What will college football look like this fall and Nebraska recruiting updates