Thanks for reading! Log in to continue.
Enjoy more articles by logging in or creating a free account. No credit card required.
Log in Sign up {{featured_button_text}}
You are the owner of this article.
Edit Article Add New Article
You have permission to edit this article.
Edit

Local stores, both large and small, are taking a different approach for what will be a unique holiday shopping season.

The goal is to attract patrons to spread their shopping throughout the season instead of keying on a Black Friday or a Shop Small Saturday.

The page also is an option given that the Shop Small NP Passport program is on hiatus this year.

In that program, shoppers who visited a number of local stores or restaurants collected stamps in a book that was then submitted for a prize drawing. The promotion was part of the nationwide Small Business Saturday the past two years.

Cassie Condon, the Chamber’s vice president of economic development and communications/marketing director, said they decided to hold off on the event this year due to the recent upswing in COVID-19 cases.

“We just decided that at this time it would not be in the community’s best interest to hold the event,” Condon said. “It has been a crazy year that we are sitting in, and I think we’re really fortunate in how our businesses have adapted to the changes and in how they have been doing things differently. They are all getting creative.”

Here is a look at what some stores and businesses around North Platte have planned.

» Hirschfeld’s will kick off its holiday season at 5:45 p.m. Wednesday by turning on Christmas lights decorating all three floors of the store and also revealing a holiday window display that combines nostalgic and modern scenes.

Hirschfeld’s also set up a community Christmas tree Friday afternoon outside the store at 401 N. Dewey St. Store employees placed a star, lights and an ornament in honor of longtime North Platte physician Dr. Leland Lamberty, who died in September. Community members are also welcome to place a meaningful ornament on the tree. A box of supplies and extra ornaments will be placed near the tree for people to use as well.

“It’s not a Rockefeller Center Christmas tree, but I think it’s something special that we all can enjoy,” said Hirschfeld’s manager Abbie Pack. “What we want to invite people to do is, if they want, come down and take a picture of them hanging an ornament and share what it means to them or why they are hanging it. Or they can just come down and hang one in the quiet of their own time.”

In addition, Santa will make a socially distanced appearance from 6 to 7:30 p.m. Saturday. He will remain in his workshop on the third floor of the building and wave to the public through the windows. There will also be a mail slot at a building door on the corner of Fourth and Dewey streets where children can drop off letters for Santa. Letters will be accepted through Dec. 15.

“We know holidays are tough for people and it’s going to be extra tough this year,” Pack said. “We wanted to come up with some safe, fun and memorable things for people to do for the holidays.”

» The Flower Market, 510 N. Dewey St., opened a pop-up store at the corner of North Bailey Avenue and East Fifth Street at noon this past Thursday.

The seasonal shop is aimed at children with clothes, toys, games and books filling the space along with other knickknacks.

“We just tried to find some different and unique stuff that maybe stores in the past would have carried,” said Flower Market owner Sarah Talbott. “I saw a need for this for this in the community and thought it was at least a good way to try it and see how it is received over the holiday season. Maybe it could turn into something else in the future.”

Talbott said the pop-up shop will likely be open Thursdays through Saturdays through the holidays. She added that a concrete schedule would be set after this past opening weekend.

» The Sports Shoppe and Big Red Etc., 1320 S. Cottonwood St., will offer a 20% discount through the coming week for individuals who make a donation to local food pantries. The store will have extended hours on Saturdays — from 10 a.m. to 6 p.m.

Store employees will sport face masks, and patrons to the store are encouraged to do so as well.

» Town and Country Western Wear, 106 E. William Ave., will run various specials and discounts through the holiday season, up to 20% off.

» Fort Cody Trading Post, 221 Halligan Drive, has winter hours of 9 a.m. to 5:30 p.m. Monday through Saturday and noon to 5:30 p.m. on Sunday. The shop features Native American jewelry and Nebraska food products among other items.

» Santa’s Workshop is set up at the Platte River Mall, 1000 S. Dewey St. The hope is to have his arrival on Black Friday but his availability remains in question.

There are also two holiday-themed events planned at the mall. The first is Saturday as the North Platte Salvation Army will be in the parking lot on the west side of the building from 10 a.m. to 4 p.m. Those who either volunteer as bell-ringers or contribute money will be eligible for prizes.

Brittany’s Clothing Store will also host a “Sip and Shop” event from 2-7 p.m. Dec. 5. It is a partnership with Lazy RW Distillery, and individuals will be able to sample whiskey and snacks.

» The gift shop at the Golden Spike Tower and Visitor Center, 1249 N. Homestead Road, has increased its Christmas items from one small display space last year to an entire room now.

“The trends were telling us that people were wanting to stop their holiday shopping a little earlier, maybe in a sense to get 2020 over as soon as they possibly can,” said Allison Stoppkotte, the administrative assistant at Golden Spike.

Stoppkotte said the Golden Spike will also have a weeklong holiday sale, starting with Shop Small Saturday, and will also have a pop-up shop at Hirschfeld’s over the first weekend in December.

Golden Spike has also been open an extra two hours, until 7 p.m., on what they are calling late-night Wednesdays. It is on those nights that the gift shop has done hourlong Facebook Live events — including employees naming their favorite items in the gift shop and a game night that featured items in the children’s section.

“I think this year it definitely is more important than ever to bring people together from a distance,” Stoppkotte said of use of social media during the holiday season.

» Westfield Shopping Center has also taken advantage of its reach on Facebook. A number of events for its 10-day “Christmas in the Neighborhood Re-imagined” that ended Saturday were highlighted on the page, including promotion of the Penguin Find-It game in which 20 penguins were hidden in stores’ window displays.

Also noted were a sock drive and coat drive as well as activities for children and promotions at selected stores.

Bible Supplies, located at 1927 West A St., posted videos of its employees reading stories as well.

“COVID just changes your philosophy in how you (promote) everything,” said Alyssa Fabik of Bible Supplies, who also runs social media for Westfield Shopping Center. “We had a great response to our ‘Christmas in the Neighborhood’ and I wouldn’t be surprised if some of (the activities) come back and maybe not just at Christmas.”

» Walmart is among the big-box retail stores that will not be open on Thursday this year as it was in recent Thanksgivings past. Walmart instead has spread its Black Friday sales over three events in November in an attempt to spread out the crowd numbers. The last of those begins online at 6 p.m. CT Wednesday. Stores, including the North Platte location, will open at 5 a.m. Friday.

» Menards has traditionally been closed on Thanksgiving and will be again this year.

The store is holding a “Black Friday Every Day” campaign with deals spread over a 10-day period. Store locations, including the one at 4571 S. Parkway Drive, will open at 6 a.m. Friday, and the Black Friday event runs through Dec. 6.

There is also a drop box at the store where individuals can donate new toys for the North Platte Police Department’s “Santa Cop” program.

» Bomgaars will be open from 6 a.m. to 8 p.m. on Black Friday but will extend the sales prices through Monday with a thought of spreading out crowd sizes as well.

“Typically in our stores we are not as densely populated as your Walmart would be. We don’t usually have the close-quarter contact (issues) like the big-chain retailers would have,” said Jody Black, the manager of the Bomgaars at 510 E. Philip Ave. “We are usually spread out in shoppers throughout the day and it seems that we get our biggest rush around 5 o’clock. I’m sure we will have four or five cashiers running and that should spread people out a little more too.” 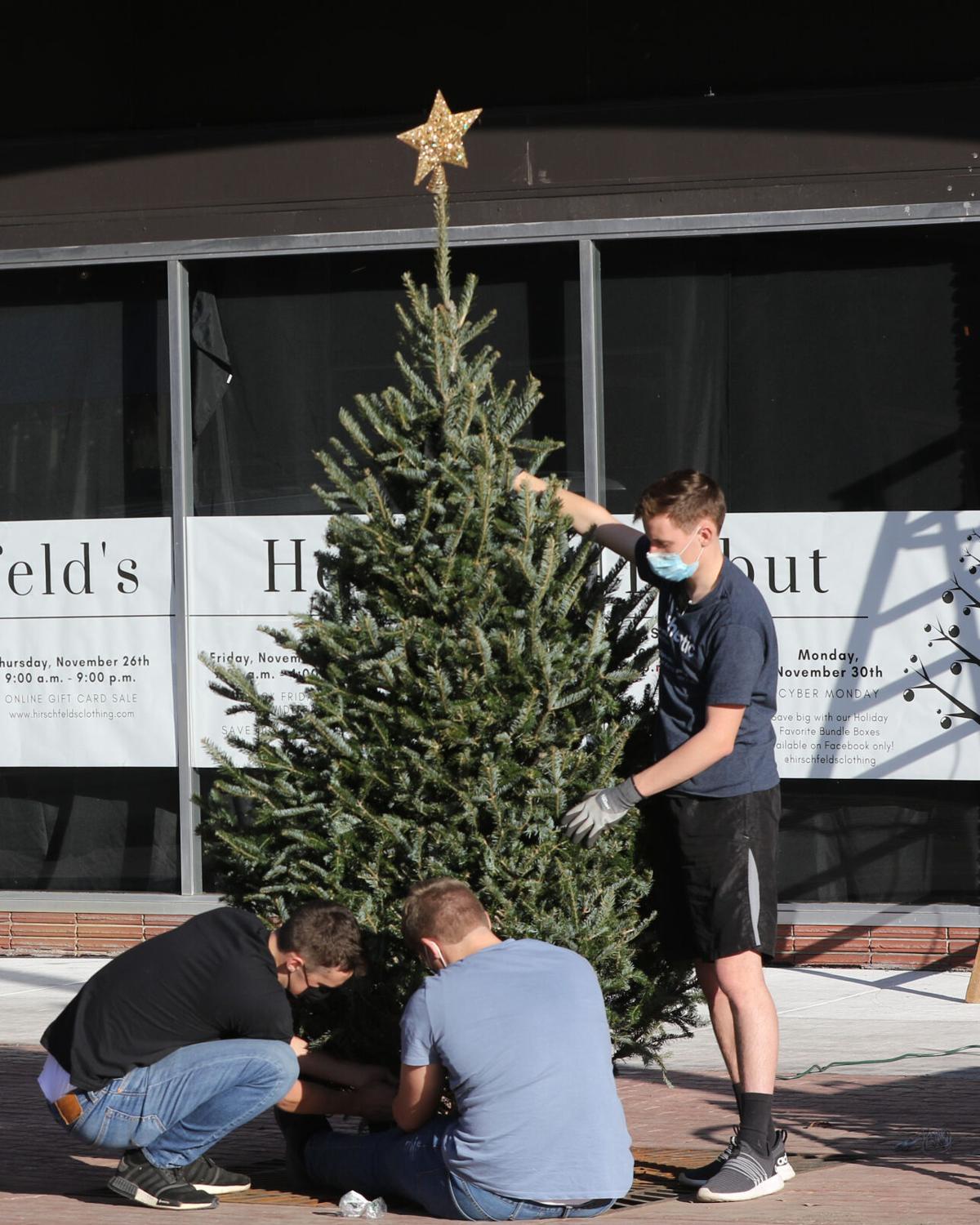 Jaram Biberston, right, holds a 10-foot Christmas tree as two other individuals secure it in front of Hirschfeld’s Clothing Store Friday afternoon. The community tree is among the seasonal activities the clothing store is doing this year. 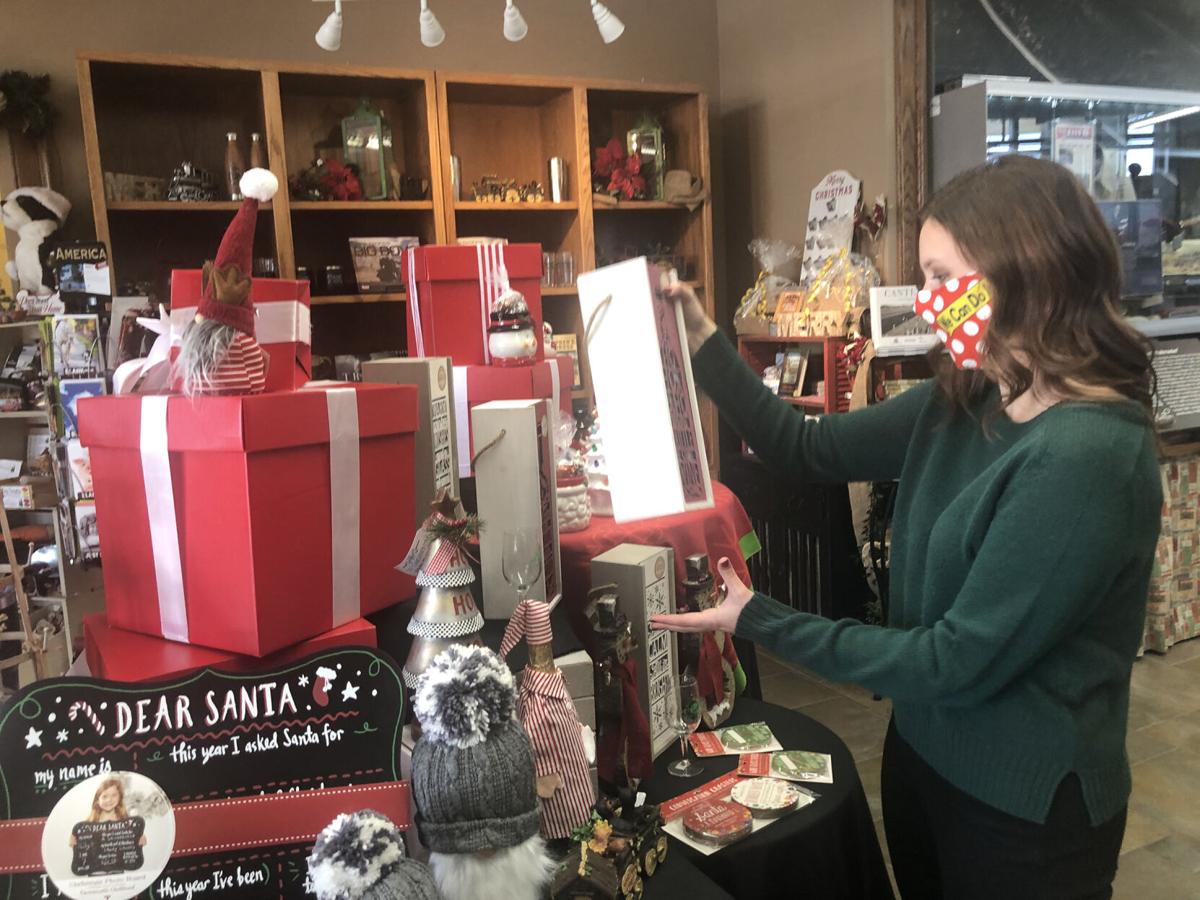 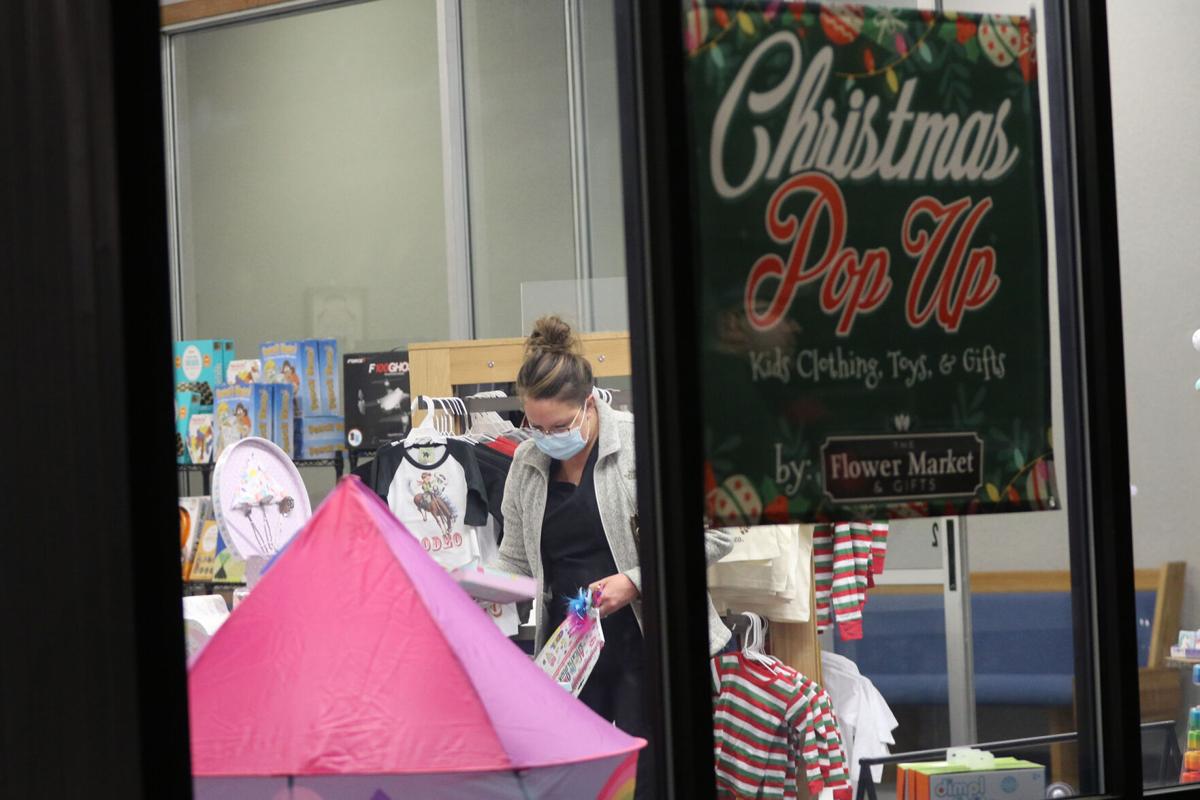