Patience and good eyes, along with natural talent, enable the creativity needed to paint wildlife scenes on bird feathers. Brent Hoover of North Platte has spent the last 30 years crafting about 500 pieces of art on a unique canvas.

Hoover also makes custom wildlife calls but has recently gotten back into painting after a brief hiatus.

“My business started initially when I had an ‘early retirement’ from the railroad,” Hoover said. “It started out with just the custom calls because I was kind of burned out on the paintings for a while.”

His paintings had become so popular that he was overwhelmed with orders.

“I had 24 paintings I had to get done between Thanksgiving and Christmas one year,” Hoover said. “After that I told (my wife) Sherri, ‘Oh my goodness, I’m so burned out.’”

From that point, Hoover focused more on the calls until about two years ago.

“I started doing the paintings more at that time,” Hoover said. “I would always do some for Pheasants Forever, National Wild Turkey Federation, and I painted them for years for Nebraska Bowhunters.”

There are restrictions on what types of feathers he can use.

“I can’t sell waterfowl or dove feathers due to federal migratory regulations,” Hoover said. “The upland birds and turkey feathers are all fine, which is why I exclusively use them.”

Lately, Hoover said, a lot of local guys starting asking for the paintings, bringing him back into the craft he started years ago.

“The first one was kind of an idea between a friend of mine and myself,” Hoover said. “He owns an archery business and we had been out hunting that day. We picked up a huge turkey feather and he said, ‘Boy, that would look really cool on a piece of barnwood as you walk into the shop.’”

Hoover painted the shop’s logo on the turkey feather.

“That’s kind of where that started,” Hoover said. “I painted his logo and put it on a board. About a month after that, I thought, why can’t I paint something on it other than a logo. A turkey on a turkey feather would be really awesome.”

He said his first attempt was “awful, it’s bad,” but with practice he has refined his work.

“My dad (Dan Hoover, deceased) worked with me a lot when I was a kid on sketching,” Hoover said. “It started out with mostly Western themes — horses and cowboys and things like that.

“Then I suppose teenage years was when I really started getting into that and it kind of morphed over into the deer, the turkeys, the pheasants and stuff like that.”

He has developed his own process over the years.

“Initially when I started doing it, I would just start painting directly on the feather,” Hoover said. “I would just block it in and let the paint hold the feather together.”

What he found was that the paint wouldn’t hold the feathers together and they would split.

“The biots of the feather were splitting even as the painting was getting completed and I was getting gaps in there I didn’t like,” Hoover said. “Now I spray the feathers so they stick together and I know they’re not going to split or curl or anything like that.”

Biots are part of the anatomy of a feather.

“The biots of the feather actually have — I mean, God is incredible — if you look between those biots, they have almost like hooks, like Velcro,” Hoover said. “If you have a split, when you get ready to start on a particular feather and you start working your fingers up the feather and it will actually pull the gaps back together, like a zipper or Velcro.”

Once the gaps are closed, Hoover pins the feather down and uses a knife or toothpick to smooth out the edges. He then sprays it with Crystal Clear, a protective finishing product.

“Once the feathers are sprayed, I let them sit for about 24 hours, and then I’ll start blocking in what I want,” Hoover said. “It’s all acrylic paint. That’s pretty much all I use. I’ve tried others, but I go back to acrylic.”

He said the acrylic paint has a flat finish that makes his paintings pop on the feather. Hoover said he tries to paint as accurate a depiction as possible.

“As much as I can anyway,” Hoover said. “You’ll never match what the Creator made.”

The time it takes for one painting is extensive — 25-30 hours, he said. He displays the paintings in a shadow box that adds 10-15 hours to the process.

“Same way with the calls, there is such a joy in the creative process,” Hoover said.

Prices for the paintings range from $500 to $1,000, depending on how much detail is required.

For more information on the paintings and the custom animal calls, B Hoover Custom Calls can be found at facebook.com/bhcustomcalls.

“I was like, we have all this space, it’s pretty decent size,” said Jason Jensen. “All the plumbing, all the electrical, everything’s already there, why don’t we just remodel it to live in and sell our house to essentially get debt free.”

Peering into the past: Hand-drawn maps made in the 1800s now available online 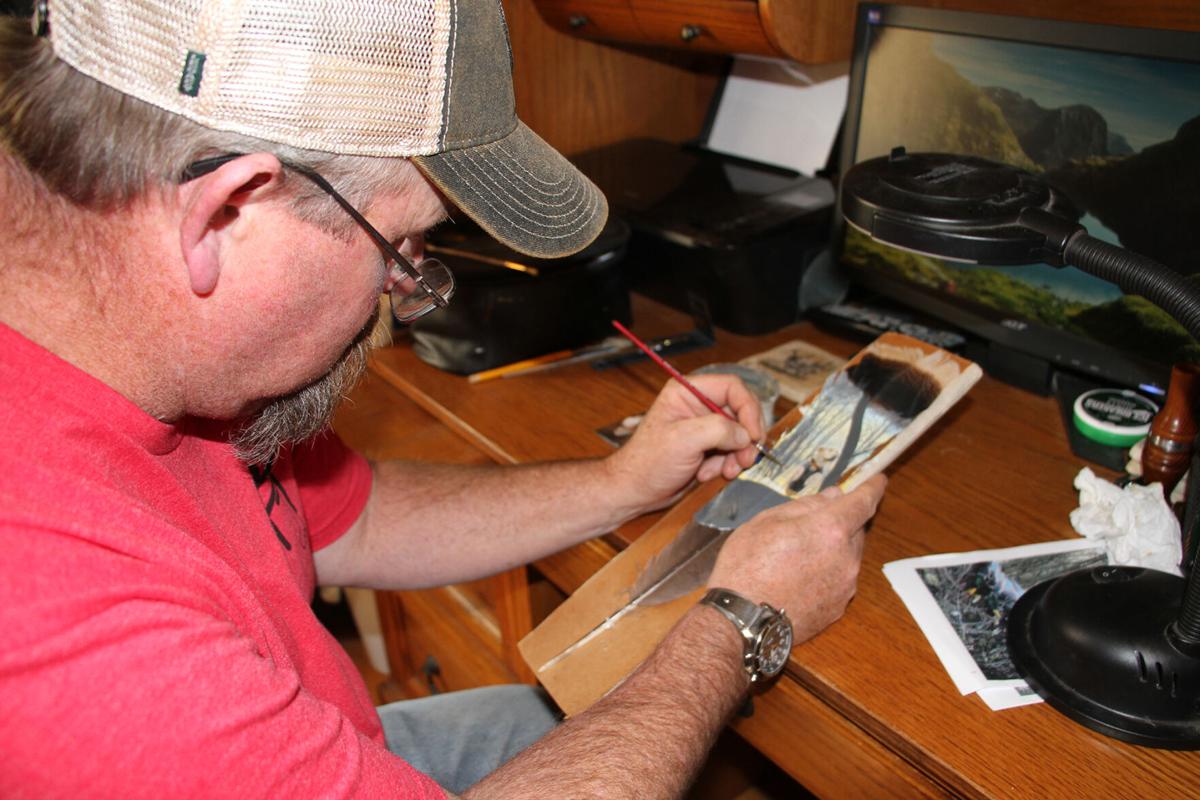 Brent Hoover, owner of B Hoover Custom Calls, paints a detailed scene on a wild turkey feather at his shop in North Platte. Hoover has been painting on feathers for about 30 years and has completed more than 500 paintings. He was painting this one for someone who wanted his favorite hunting dog in a hunting scene. 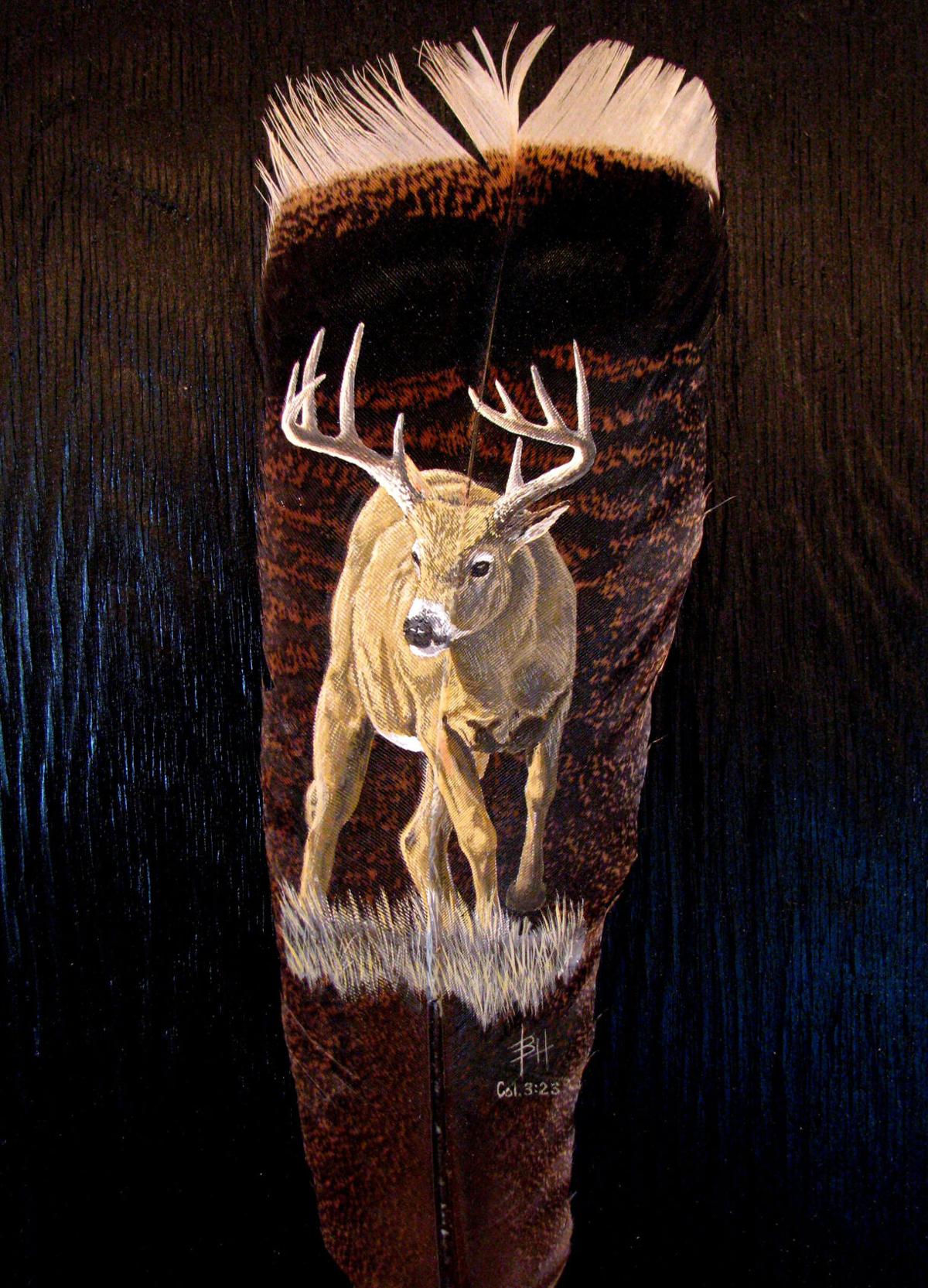 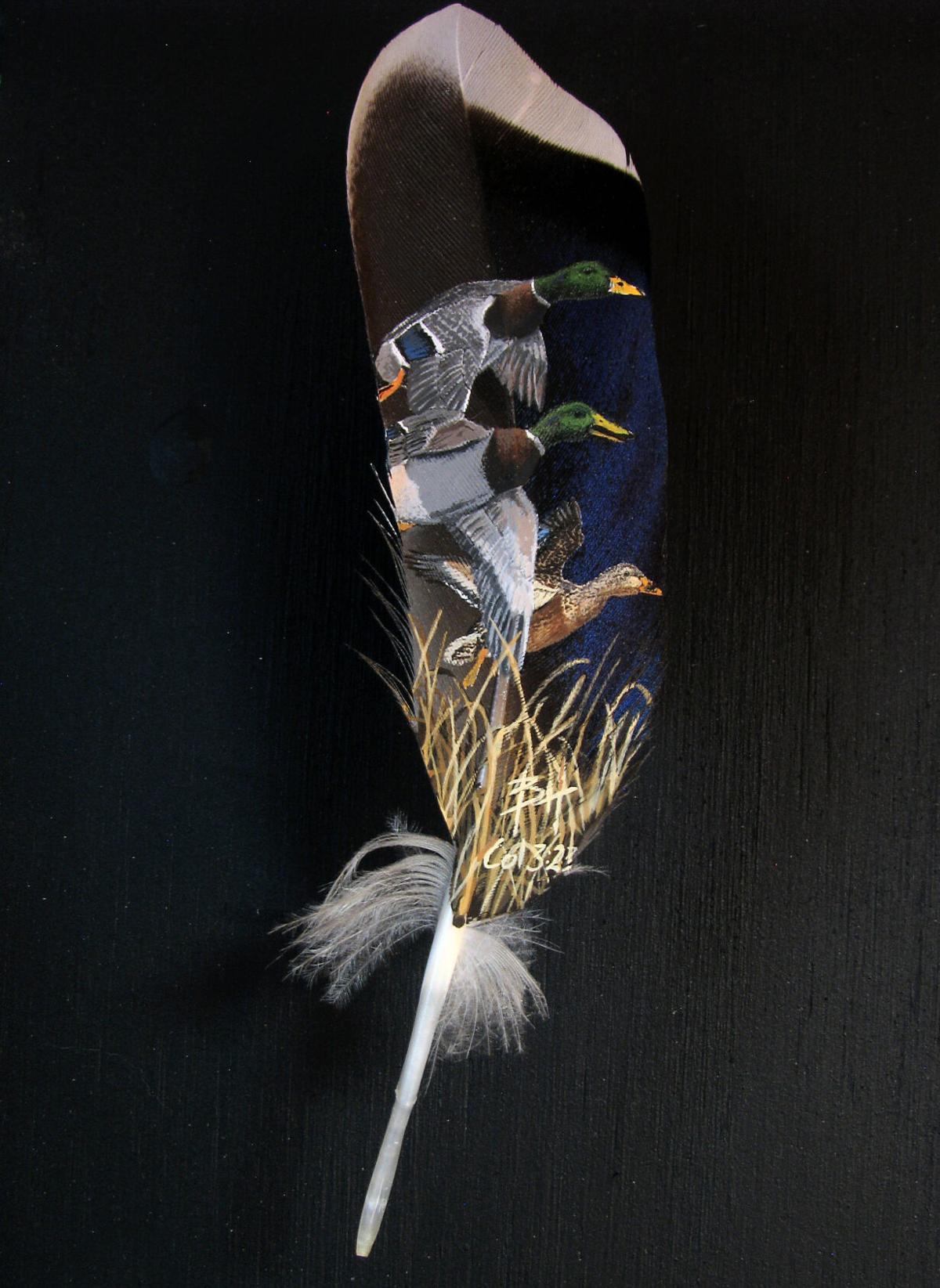 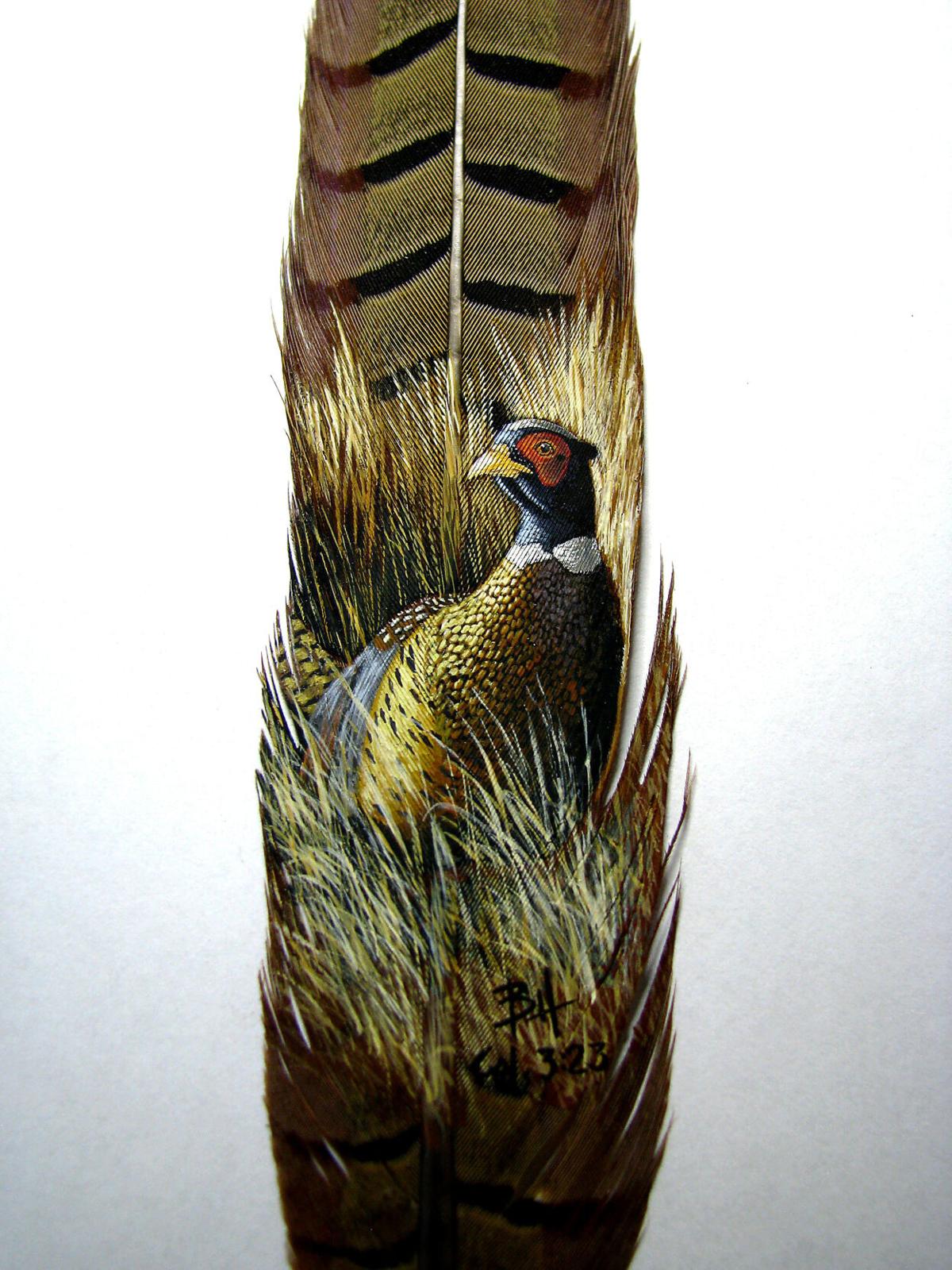