Skip to main content
You have permission to edit this article.
Edit

Browns vs. Chiefs: Follow the latest scores and updates from the NFL playoffs

2020: A year we won’t forget in North Platte
0 comments
Share this

Like a one-sided baseball pennant race, the only drama in choosing the top local stories for 2020 is the race for second place.

The pandemic permeated virtually everything that happened after February — even the many local examples of “good news” that thankfully broke through the dark clouds of America’s worst health crisis since 1918.

So no one will be surprised at The Telegraph’s choice for 2020’s No. 1 story. Feel free to quibble with our lineup for the others; quite honestly, the rest could easily be shuffled in any order.

And, like we said, most of them could be rolled into the top story anyway.

"This vaccine will give me some peace of mind with fighting this every day and seeing what it does to people,” said Mel Pendleton, charge nurse in the emergency department at Great Plains Health.

Frank Naranjo, 92, was the county’s first confirmed COVID-19 death on March 30. As of last week, 32 COVID-19-related deaths were confirmed in the six-county West Central Health District, and 18 others were under investigation.

The rest of this pandemic’s story, of course, lies ahead during 2021.

Filing deadlines for the 2020 elections had barely passed when COVID-19 struck and upended candidates’ campaigning expectations.

But Lincoln County residents took advantage of every legal method of casting their ballots, smashing previous records for early voting in both May’s primary and November’s general election.

On the morning after a long election night, North Platte’s next mayor was starting the task …

City voters also gave more than 3-to-1 approval to another 10-year renewal of the Quality Growth Fund, which sets aside a portion of city sales taxes for economic development purposes.

As 2020 ended, people who remembered how North Platte’s downtown looked last New Year’s had multiple reasons to be astounded at its transformation.

It had a new name — the Canteen District — to accompany its July listing on the National Register of Historic Places of all or parts of 13 blocks on both sides of the Union Pacific tracks.

It also bore the combined fruits of the 7½-month-long reconstruction of six blocks of downtown streets — while reusing most of their 1916 bricks — and continued restoration and freshening of storefronts that began in 2018.

Developer Jay Mitchell opened the doors to the Hotel Pawnee Thursday, letting the public gets its first look at North Platte's old gem as his crews continue to restore the Canteen District building.

While Paulsen Inc. crews tore up and rebuilt nearby streets, the once majestic 1929 Hotel Pawnee sat quietly awaiting its own turn at resurrection.

Pawnee owner Jay Mitchell and his restoration team plan a 6-9 p.m. open house Thursday in the lobby — featuring a 17-foot-tall decorated Christmas tree — so community residents and downtown shoppers can peek at their recovery work.

Mitchell, who acquired partial interest in the Pawnee after its August 2013 closure, had bought the rest in October 2019 after the North Platte Area Chamber & Development Corp. untangled the debts left by its failure as a retirement hotel. His planned March start was scuttled by COVID-19’s outbreak.

They mostly got there — though the pandemic threatened to unravel it all.

An additional 140 businesses benefited from a May emergency gift-card program — putting up to $4,000 in each participant’s coffers — launched by the chamber and supported with matching funds from the Quality Growth Fund.

Instead of shriveling amid the pandemic, North Platte’s net local sales-tax collections reached record highs in three of the four summer months.

City officials began negotiating with Grand Island-based Chief in October to buy or lease Iron Eagle Golf Course, promising to settle a 26-year-long controversy over the city’s ownership of the flood-troubled course.

And chamber leaders in June announced they had secured a site near Hershey for a Lincoln County “rail park,” offering fresh hope to retain industrial workers idled by railroad layoffs and furloughs since 2018.

North Platte set its all-time monthly record for sales taxes in June — a net $801,290 — despite losing its entire “festival month” to COVID-19.

The Miss Nebraska and Miss Rodeo Nebraska pageants for 2020 were canceled entirely, following the leads of their parent national organizations.

Nebraskaland Days delayed its 2020 edition until August while managing to reschedule most of its signature events and even line up replacement concert acts. But the revised celebration had to be scuttled for good after a fresh but unrelated COVID-19 outbreak. Even so, the Buffalo Bill Rodeo finished its 74th annual run without spectators its final three nights.

“West Side Story,” North Platte High School’s spring musical, was canceled on dress rehearsal night. The state speech meet was canceled, as were all spring sports and fine-arts contests — chronicled in The Telegraph’s “Lost Season” series — and in-person school attendance itself for the rest of 2019-20.

But even as the area’s spring rites of passage were being erased, Hirschfeld’s in downtown North Platte promised to stage summertime high school proms for interested schools if health measures could be eased by then. They were, and Hirschfeld’s kept its promise for nine area schools — including NPHS and St. Patrick High School — in late June and July.

Both schools staged belated 2020 graduations as July turned into August, clearing the stage for a memorable fall as North Platte students finally returned to school buildings.

As fine-arts students got used to performing with masks, the NPHS Marching Band won superior ratings in its only two contests — one live, the other recorded — and the Bulldog one-act play cast qualified for state.

» Authorities found the body of 42-year-old Kimberly Ermi of Greeley, Colorado, in a North Platte pond on March 3.

» A May 22 confrontation on a North Platte street ended with the shooting death of 25-year-old Brett A. Torres. Keith L. Allen, 44, of North Platte pleaded not guilty to first-degree murder of Torres July 20.

» Kathleen E. Jourdan, 32, a resident physician from Omaha, pleaded not guilty in Dawson County District Court Aug. 17 to second-degree murder of her 35-year-old husband, Joshua. He was shot June 17 as their family drove on Interstate 80 near Cozad.

» Alva C. Decker, 33, of Indianola pleaded not guilty in Red Willow County District Court Nov. 3 to first-degree murder of 30-year-old Steven L. Weaver. Weaver’s body was found by authorities Oct. 8 as they investigated a wreck that killed the car’s driver.

» Harlie E. Sathoff, 19, of North Platte has been charged with second-degree murder in connection with a Nov. 12 fight that ended with the fatal stabbing of Bryce Wood, 20. She faces a preliminary hearing Monday in Lincoln County Court.

Court action in other notable regional deaths also climaxed or moved toward climaxes during the year, including the September 2018 shooting death of Ethan Pohlmeier of North Platte.

Jesus A. Martinez, 18, of Grand Island pleaded no contest Oct. 29 to second-degree murder of Pohlmeier and possession of a stolen firearm.

Fellow 18-year-old Brayden Turner, a former North Platte resident, pleaded no contest the same day to lesser related charges. Sentencings for both were delayed until after the new year.

A major eastern Nebraska murder case also wrote one of its chapters in west central Nebraska.

North Platte's first mass vaccine clinic distributes 500 doses, but changes being made after many left waiting in cold

Some at Saturday's mass vaccination clinic had to stand outside for extended periods of time. West Central District Health Department is implementing changes so it won't happen next time.

A 2010 divorce brought Melissa Jerabek back home to North Platte, hoping to start over with a home she and her daughters could call theirs. On Thursday afternoon, they received the keys to the 58th house completed by Habitat for Humanity.

Board member Ivan Mitchell voiced his displeasure with the communication process, saying a document that was sent to parents should not have been made public until it was vetted by the finance subcommittee.

The women’s apparel chain said Thursday it filed voluntary petitions for Chapter 11 in U.S. Bankruptcy Court for the District of New Jersey.

'Just time to give back': North Platte roofing company wants to give someone a new roof for free

“I hadn’t heard about anything like this around here,” said owner Zane Grandel. “I’d seen it done in big cities, so I figured this was the year to do something like that for somebody.”

North Platte resident Stephan Budke opens up about his long battle, and recovery from, COVID-19

“My heroes are my wife and my little girl,” said Budke after his battle with COVID-19. “The care at Great Plains Health was extraordinary." 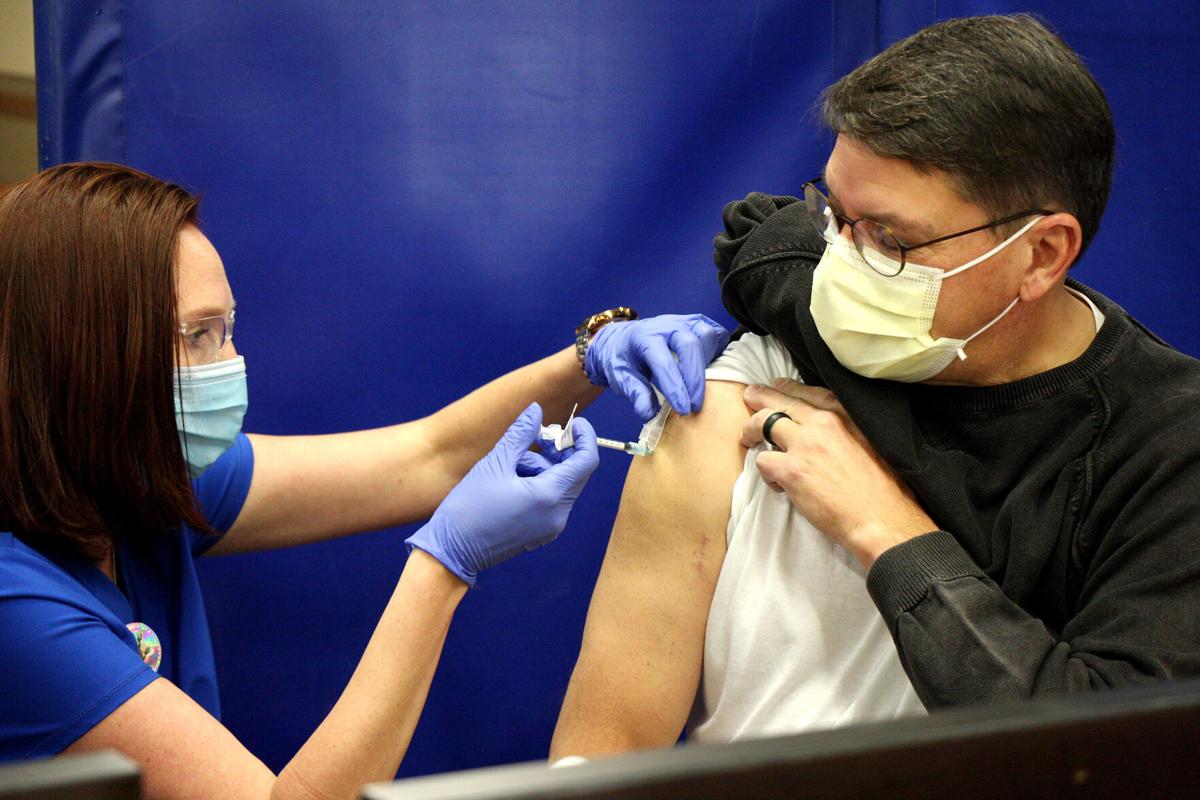 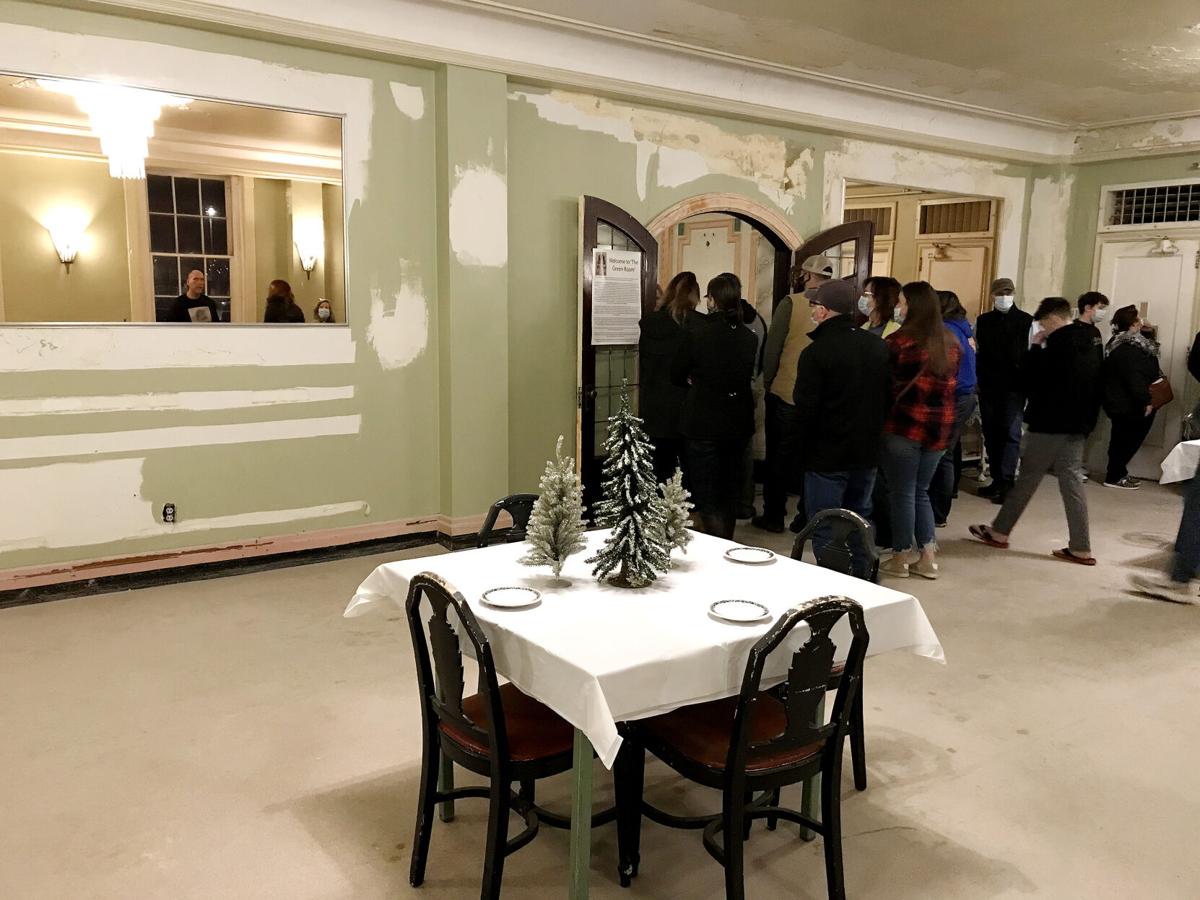 By mid-December, enough progress had been made on restoration of the Pawnee Hotel’s lowest two floors to offer sneak peeks at their vision for recovering the hotel’s past grandeur. Hundreds took advantage of open houses Dec. 17 and 21 as the National Register of Historic Places structure celebrated Christmas for the first time in eight years. 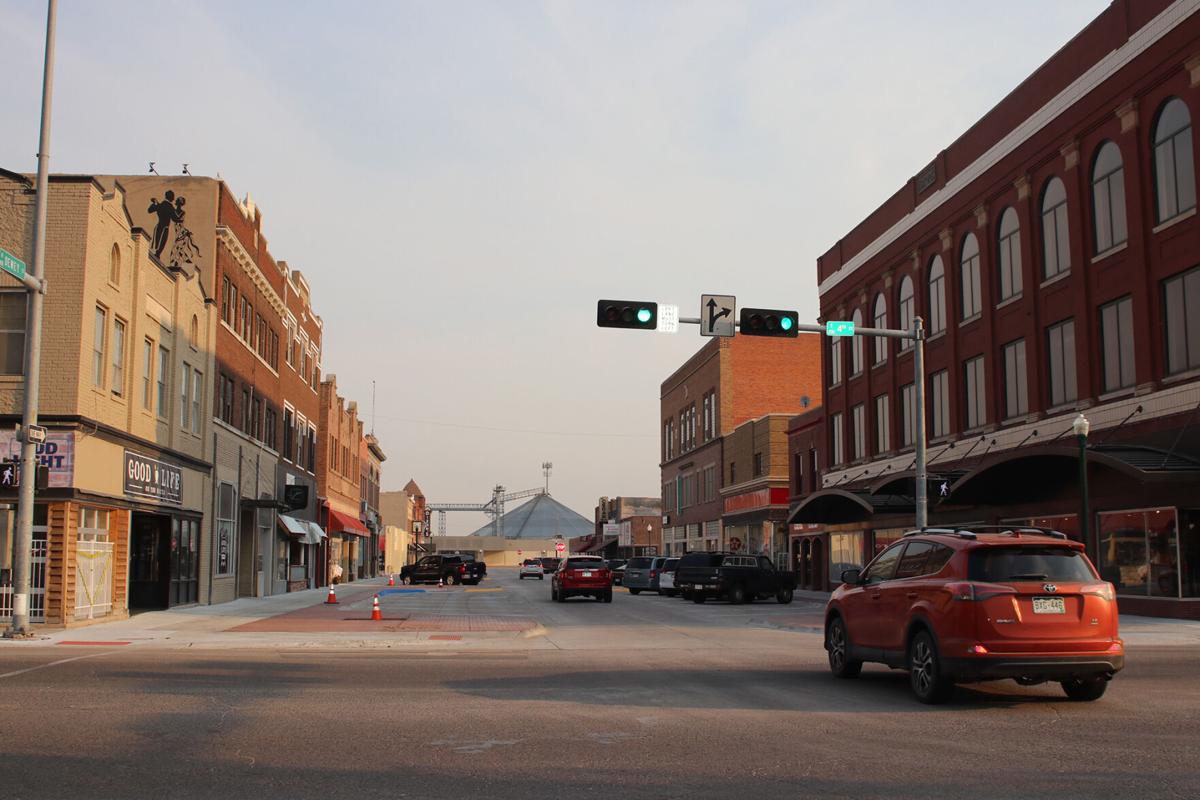 In North Platte’s newly named Canteen District, $2.81 million in street renovations, begun in February, doggedly continued throughout COVID-19’s early months. With the “street and below” work done by mid-October, “street and above” beautification was partly done in time for holiday shopping. Completion of the North Platte Downtown Association’s vision is expected during 2021’s first half. 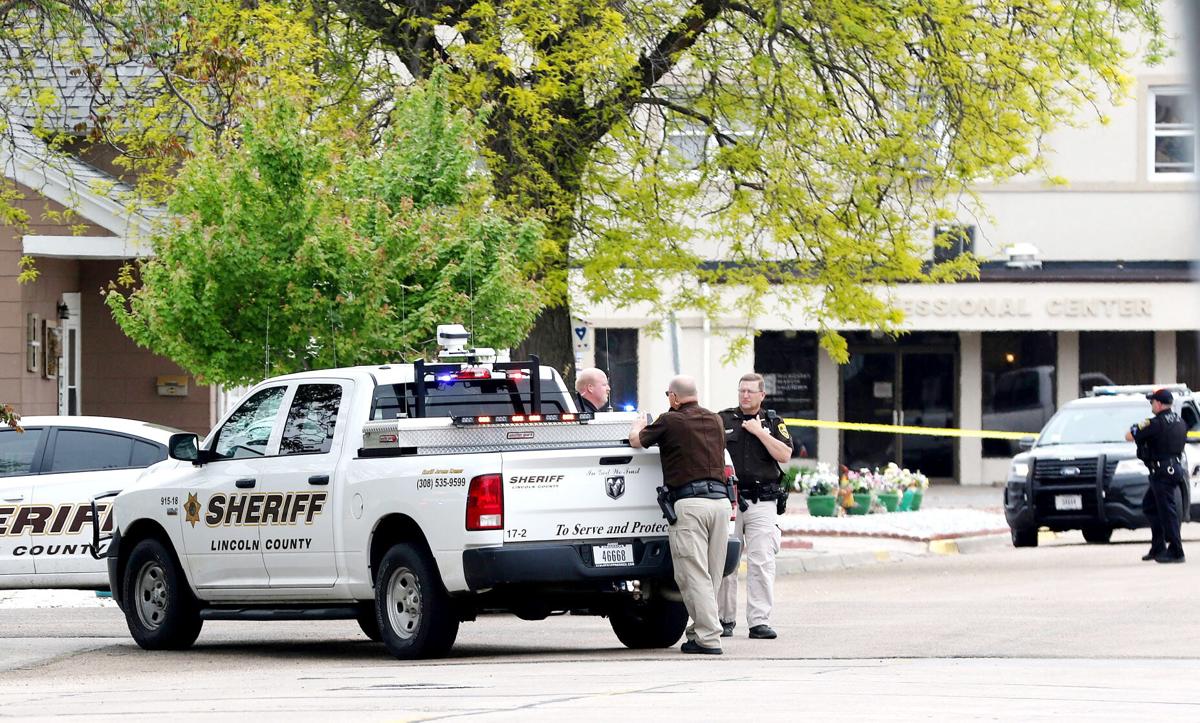 Members of the Lincoln County Sheriff’s Office and North Platte Police Department gather at the scene of a shooting on the 100 block of South Chestnut Street on May 22. Keith L. Allen of North Platte has pleaded not guilty to first-degree murder in connection to the incident. 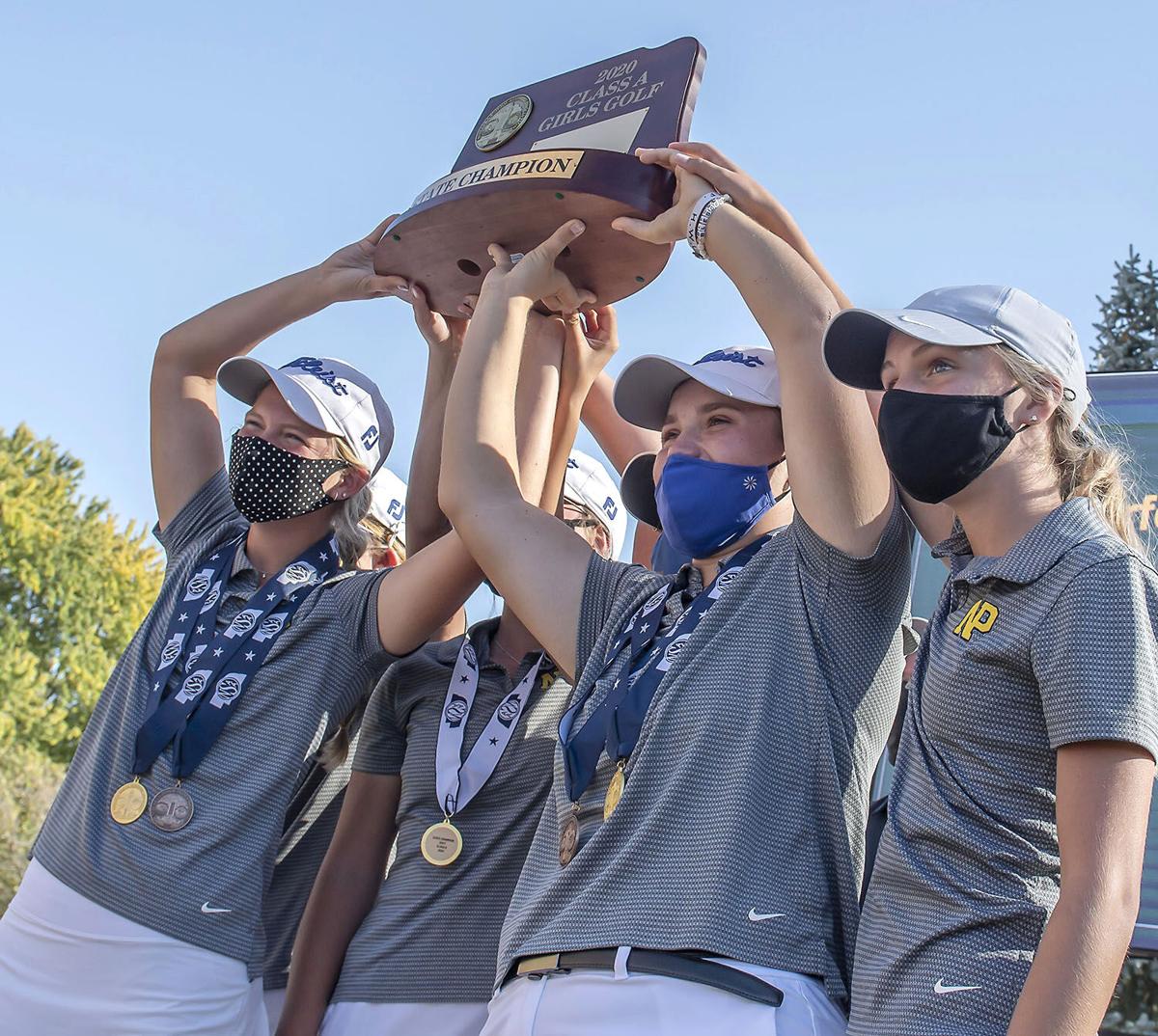 Members of the North Platte High golf team celebrates after winning the team title Tuesday afternoon during the Nebraska Girls State Golf Meet at the Norfolk Country Club in Norfolk.