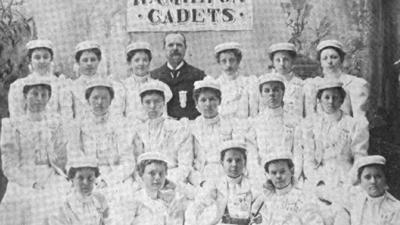 Training teenage women to perform military drills — and win statewide acclaim for doing so — was unusual in the 1890s, when women couldn’t vote and men did all the fighting.

William H. Hamilton did just that. And then he did it again.

In his successive all-girl units of “Hamilton Cadets” in Lexington and North Platte, modern readers can perceive the roots of drill and dance teams. Female marching band members and drum majors. And, of course, servicewomen in America’s armed forces.

It’s not known why the first Hamilton Cadets broke up. But they were reborn 60 miles west.

On Feb. 15, 1897, four months after the irrigation fair, The Telegraph had big news for its readers.

“W.H. Hamilton of Lexington is in the city today with a view of locating here,” it said. “Our citizens will remember Mr. Hamilton as the drill master of the Hamilton Lady Cadets, and if he locates here he will form a company of 16 young ladies and perfect them in the drill to such an extent as to astound the natives.”

Hamilton, who bought a feed and flour store, soon was co-directing a “flower drill” at a July 23 merchants’ carnival at long-gone Lloyd’s Opera House downtown.

The second Hamilton Cadets formally organized Aug. 28. “The company is formed of 16 young ladies well known in North Platte,” The Telegraph said, “and to make them known is to assure the success of the company, especially under Mr. Hamilton’s able command.”

As he had in Lexington, Hamilton soon added a drummer to boost his roster to 17. Except for that drummer — 12-year-old Fern Stamp — all cadets were ages 15 to 17.

They were performing within a month, practicing at the opera house and learning to execute their 30-minute program with cues from Stamp’s drum and Hamilton’s whistle. They acquired “basket fencing sticks” for sword drills, the Semi-Weekly Tribune said.

On Feb. 11, 1898, North Platte musicians joined the Hamilton Cadets at a Lloyd’s fundraising concert. Some 470 people came to help pay for the cadets’ new uniforms.

Members of William H. Hamilton’s all-female Hamilton Cadets military drill team in North Platte (1897-98), based on newspaper accounts (married names are given where applicable and known):

Cunningham replaced Delay, a charter member, before the unit’s June 1898 performance at Omaha’s Trans-Mississippi Exposition. Miltonberger replaced Kocken in September 1898, a month before the unit disbanded.

Members in both the Lexington and North Platte versions of the Hamilton Cadets were generally 15 to 17 years old. Stamp was 12 when she joined the North Platte unit in 1898.

Dr. E.B. Warner, father of cadet Blanche Warner, “predicted the company would attract more attention at the Trans-Mississippi Exposition than any of the crack military companies in attendance,” The Telegraph said in its 1898 story on the fundraiser.

The “Trans-Miss,” modeled after the Chicago World’s Fair of 1893, would run from June through October 1898. President William McKinley would twice visit the exposition, conducted in grand though temporary buildings across 184 northeast Omaha acres.

The cadets had to be invited first. Besides performing at club and church meetings, they gained more experience at a March 22 joint meeting of five railroad unions at Lloyd’s.

“The Cadets were at their best,” The Telegraph said, “and went through the different evolutions in a manner that brought forth such rounds of applause as fairly shook the building.”

Frank Sargent, grand master of the Brotherhood of Locomotive Firemen and Enginemen, obtained the only known up-close photo of the North Platte unit.

“Attractive Features of the Union Meeting at North Platte, Neb.,” read its caption in the union’s magazine.

The Hamilton Cadets also are in the back of an 1898 Lincoln County Historical Museum photo documenting North Platte’s early reputation for supporting the armed forces.

The World-Herald’s April 4 front page includes a cover letter signed by Hamilton and all 17 North Platte cadets with a $10 donation to the paper’s “Cuban Relief Bureau.”

“As we probably will not be called upon to go to war, we feel very proud that we can be of service to our country and her friends in (the) same way,” it said.

At least 2,300 people surrounded the 1869 Union Pacific Depot April 27 for a downtown parade and sendoff for their “Cody Guards,” named for William F. “Buffalo Bill” Cody.

Marching behind the soldiers were the Hamilton Cadets, with Civil War veterans of North Platte’s Grand Army of the Republic unit leading the guardsmen.

“They marched around several blocks and then formed in line on the east side of the depot,” The Telegraph wrote, “while the band played that patriotic song which all love to sing, ‘America.’”

After three cheers for the GAR, Cody Guards and Hamilton’s group, the cadets presented bouquets to each guardsman.

Omaha and Lincoln papers prominently mentioned the Hamilton Cadets’ role — and hinted readers would be seeing them soon.

North Platte lawyer William Neville, father of future Gov. Keith Neville, chaired the Trans-Miss organizing committee. He “was authorized to confer with the Hamilton Cadets of North Platte ... to appear at the exposition on ‘Nebraska Day’ and give a series of fancy drill movements,” the Omaha Bee said.

Having led the city’s Memorial Day parade in between, Hamilton and his cadets boarded a train for Omaha June 13 with his wife, Fannie, and three other chaperones. The Union Pacific covered the costs.

They helped to open the Trans-Miss “Nebraska Building” the morning of June 14, drawing large crowds to that event and an afternoon drill in front of the Government Building.

On June 16, The Telegraph carried a World-Herald account of the latter performance before about 1,000:

“Arrayed in blouses and short skirts as white as snow and going through a long series of fancy evolutions with admirable and pleasing precision, they afforded a rare spectacle which elicited remark from everybody.”

They gave more drills and attended social events before returning home June 17. En route, they drilled at the Soldiers’ Home and on downtown Locust Street in Grand Island.

“From the time of their arrival in Omaha until their departure, they were the objects of much attention. No ‘breaks’ were made in the drills, and compliments galore were heard.

“Captain Hamilton said that a German army officer who witnessed the drill told him that he had seen the performances of every soldiery in the world, and that in some respects the Cadets excelled them all ...”

A Sept. 3 Telegraph item said the group was “figuring on visiting Denver in October to be present at the Mountain and Plain Festival.”

And Trans-Miss leaders inquired about having the girls perform again during their “Peace Jubilee” week in mid-October.

But Hamilton’s second all-girls drill team wouldn’t last as long as his first.

“The Hamilton Cadets have disbanded for the winter, on account of so many of the members having dropped out, some on account of sickness and others leaving the city,” The Telegraph reported Oct. 28.

They would never reassemble.

Hamilton returned to Lexington in 1899 to become “director general” of the new Lexington Street Fair. He moved to Clovis, California, in 1902 with his wife and their daughter, Pearl. He died at age 84 in Long Beach on Sept. 21, 1934.

She, her sister and her family had moved in December 1898 to Greeley, Colorado, two months after Hamilton dismissed his cadets for good.

The Telegraph noted their departure: “The Hamilton Cadets, the organization that attracted so much attention at the Omaha exposition and of which the Misses Lotta and Reba Day were valued members, turned out in a body to see their sister members and friends safely on their journey.”

For these young women, and generations of women and men after them, North Platte hospitality would become a famous habit.

Your brain's 'fingerprint' can be identified in just 100 seconds

Lemurs have a 'gourd time' at Oregon Zoo

Lemurs have a 'gourd time' at Oregon Zoo 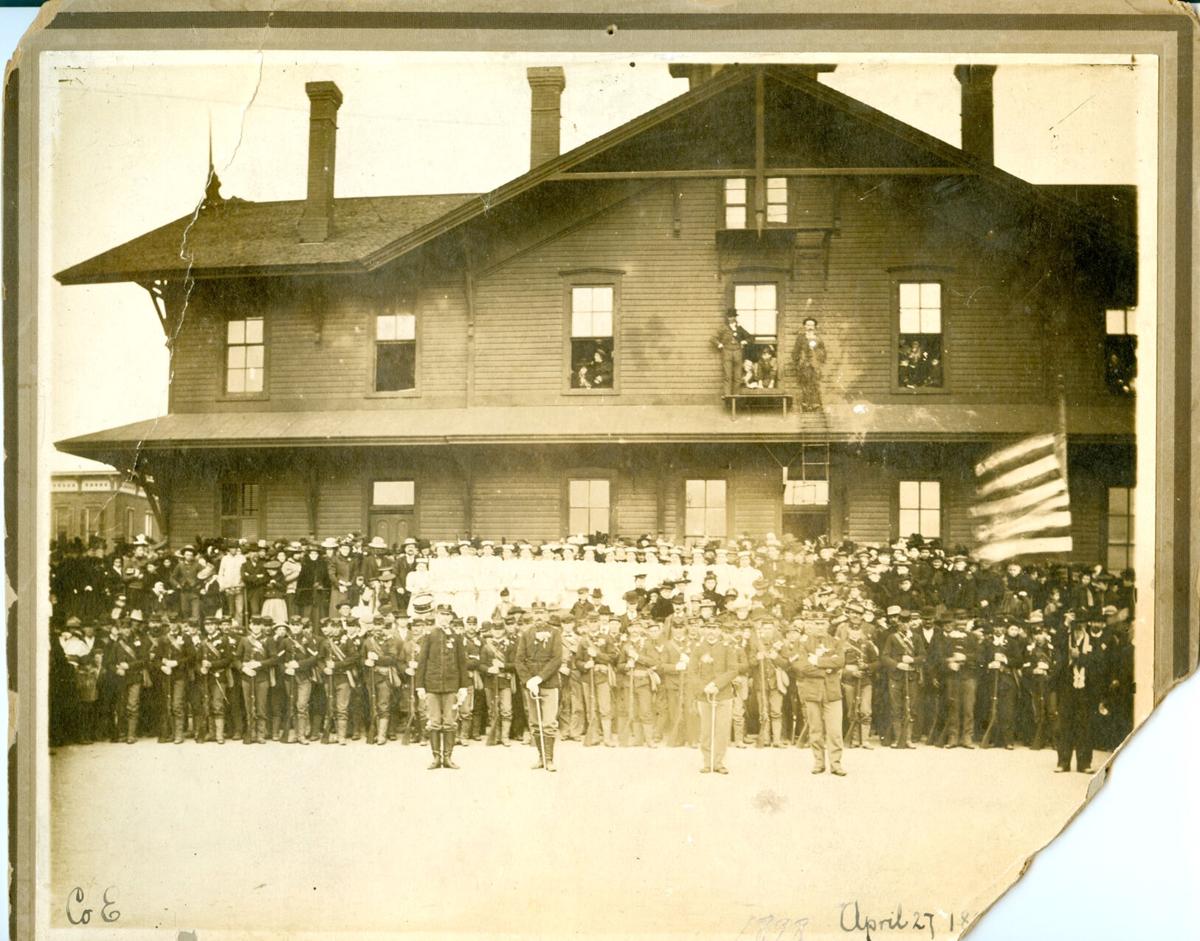 The 17 members of North Platte’s version of the all-female Hamilton Cadets military drill team can be seen in white in this April 27, 1898, photo at the city’s original 1869 Union Pacific Depot and Hotel. Director William H. Hamilton’s unit took part in a downtown parade and sendoff ceremony for North Platte’s Cody Guards state militia (front), called to duty with that month’s outbreak of the Spanish-American War. 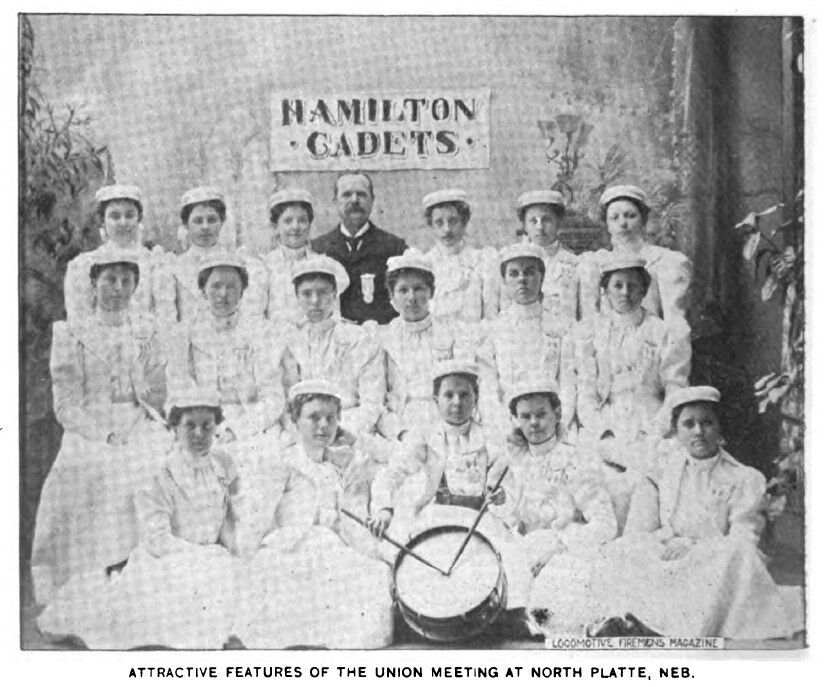 Director William H. Hamilton appears with the 17 women of his reorganized Hamilton Cadets military drill team in this photo from a March 1898 joint meeting of railroad unions in North Platte. Frank Sargent, grand master of the Brotherhood of Locomotive Firemen and Enginemen, obtained the photo for publication in the union’s national magazine. No names of members are given, but drummer Fern Stamp (front row) can be identified with help from a roster in a Telegraph story of Feb. 12, 1898. 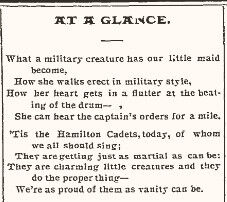