NFL Sunday: Follow the latest scores and updates from the NFL 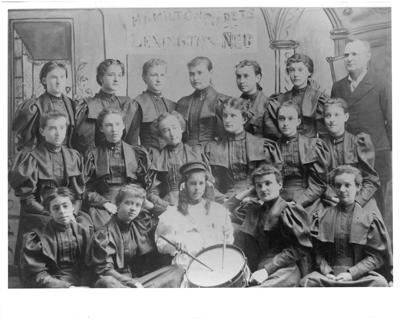 The letter came to World War II Canteen founder Rae Wilson’s home as though from another century, another war and another group of young, patriotic North Platte women.

“Recently we were told by a good friend that a picture of the ‘Hamilton Cadets’ still hangs in the waiting room at the (Union Pacific Depot) station near your Canteen,” one Charlotta (Day) Cheesman wrote from Vallejo, California, in a letter printed in The Telegraph on Oct. 31, 1942.

“It may be of passing interest to tell you (that) my sister Reba (Day) Dickey and I were proud members of that organization and as a group played a part in sending the National Guards away to the Spanish-American War in 1898 and greeting troops as they passed through.

“So glad that North Platte is still carrying on with its traditional hospitality.”

It seems the roots of “Canteen Spirit” run deeper than North Platte’s 1941-46 Canteen — which marks its 80th anniversary on Christmas Day — or even the original 1918-19 World War I Red Cross Canteen.

But Cheesman’s letter raises an intriguing question: Who — and what — were these “Hamilton Cadets”?

They were statewide sensations — twice over — 125 years ago.

Besides sending North Platte’s Guard unit off to war, his successor unit wowed audiences at the 1898 Trans-Mississippi and International Exposition “world’s fair” in Omaha.

Both versions coincided with a late 1800s movement to promote physical education for young people. Hamilton’s units, however, appear unrelated to the all-boys “Hamilton Cadets of the United States,” which boasted drill units of 14- to 17-year-olds in many eastern U.S. cities.

The Morrill Act of 1862 required “land-grant” colleges to teach military tactics, Gary and Caitlin Mitchell wrote in Nebraska History magazine in 2020 of a “broom brigade” at Omaha Central High School.

“But the act didn’t discuss gender, so a few universities started military-style units for women,” they said.

So did a former central Nebraska sheriff.

Born in 1849 in Northern Ireland, William Hamilton immigrated to the United States in 1872. A June 17, 1898, story in Lincoln’s Nebraska State Journal says he was “formerly a drill master in the English army.”

He was popular in Lexington, winning two-year terms as Dawson County sheriff in 1889 and 1891. He also served on the county fair board and as Lexington fire chief.

The Lexington Clipper-Citizen noted his newest activity on May 11, 1894: “W.H. Hamilton is teaching several of the young ladies of the High School to go through maneuvers of the Scarf drill, which they expect to give at one of the coming school entertainments.”

“Musical Drill, Part 2,” an 1892 instruction book, called the Scarf drill “a most attractive and graceful Drill for Girls.” But “Military Gun Drill” was “specially suitable for Boys.”

On Dec. 21, 1894, Lexington’s Sons of Veterans held an evening “entertainment” to raise funds for poor veterans and residents. Its “especial features” would include “the military drill by young ladies,” the Clipper-Citizen had written Nov. 30.

Outside a “crowded to overflowing” Grand Central Hall, “the drill executed by 16 lovely young ladies of Lexington High School was excellent, and their performance reflects credit upon W.H. Hamilton, who officiated as drill master,” the paper wrote Dec. 28.

Statewide newspaper accounts would marvel at their precision, crediting Hamilton’s unit with executing as many as 350 movements without a single vocal command.

“It is safe to say no company of young ladies can surpass them,” the Omaha Bee said of their performance at Lexington’s 1895 Fourth of July celebration.

Hamilton and his 17 cadets — he had added a drummer — traveled to Hastings that August for the annual “encampment” of the Nebraska National Guard and the state’s Grand Army of the Republic clubs of Civil War veterans.

The men, declared the Omaha World-Herald, would meet “a thoroughly drilled company of young girls who will challenge the whole brigade to furnish a company that has the nerve to go out and struggle for supremacy in the practice of the art of war. ...

“The challengers assert with confidence in their ability to defeat even the (Guard’s) famous Thurston Rifles or any other company of mere men.”

The Guard didn’t risk that outcome.

“It is noticed that there is no provision made in the published program for the contest to which the Hamilton Cadets, the girls’ company of Lexington, challenged any and all companies of the guards,” the World-Herald wrote Aug. 23 under the title “Girls’ Company Snubbed.”

Members of the Lexington Hamilton Cadets

“This omission is not explained, but it is taken to mean that the officers of the National Guard concede as a matter of course the superiority of the cadets.”

But the Guard still welcomed them, giving them quarters near Gov. Silas Holcomb’s tent.

They “drew a large and admiring crowd” to an early morning drill Aug. 28, marched in that day’s downtown parade and “gave a fine exhibition drill on Second Street which was finely executed and greatly appreciated,” said the Hastings Independent Tribune.

Despite replacing half its lineup in 1896, the Hamilton Cadets returned to Hastings for the Guard encampment. Omaha was next.

“Small in numbers, but great in attraction,” they “captured the hearts of the multitudes” at the State Fair parade, the Bee reported. “They were loudly cheered all along the line of march,” the World-Herald added.

Within a year, an all-new edition would become the pride of North Platte.

What do we know about the Omicron variant? 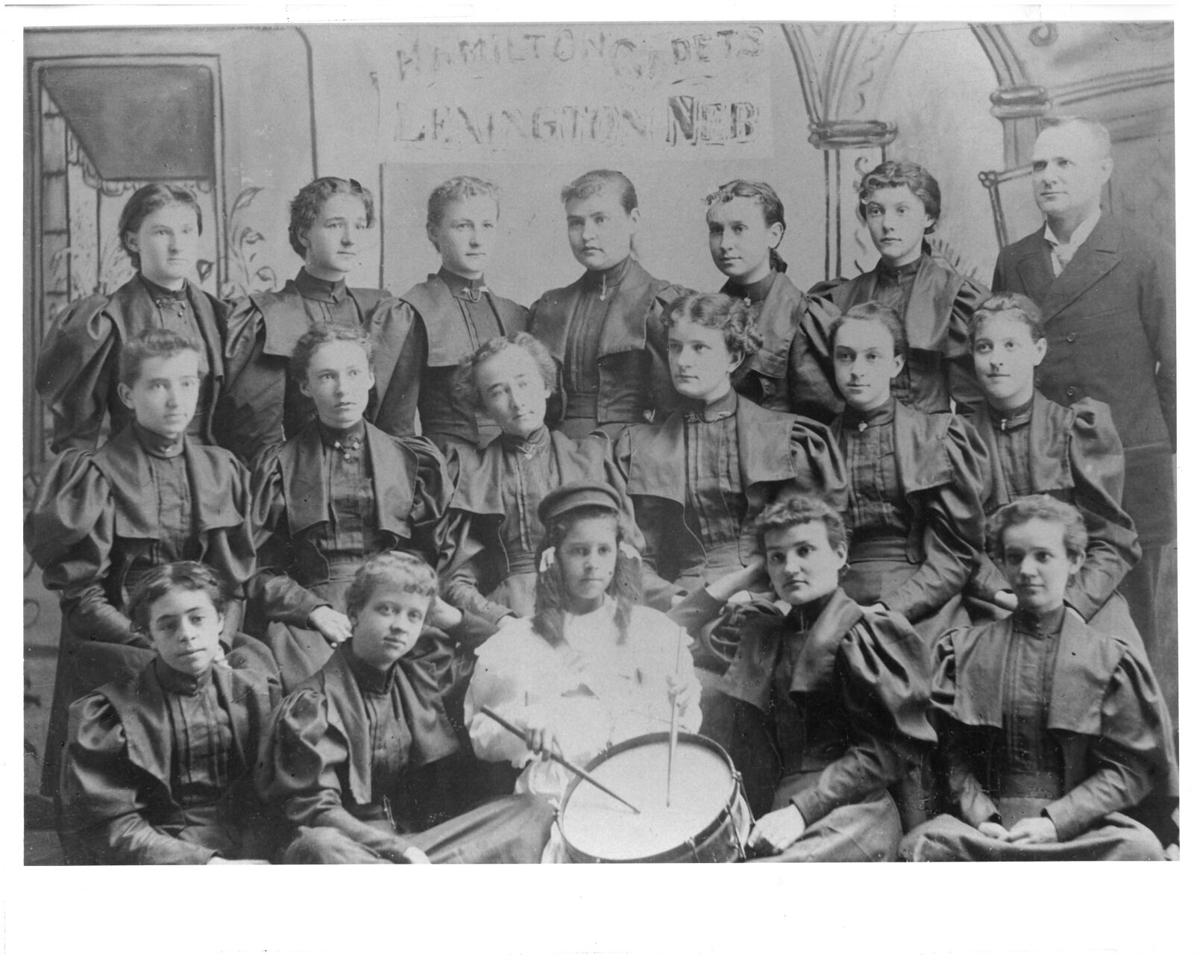 The Hamilton Cadets, a group of young women who were part of the drill team lead by Mr. William Hamilton, pose in this photo from the 1890s. The young women marched to the beat of a snare drum and made trips to surrounding towns for local celebrations. In the first row, from left, is Vena Warrington, Dora Zimmerer-Krier, Cornelia Krier-Jacobson, Laura Squires, Kate Walker, Clara Bradley and William Hamilton. In the middle row, from left, is Edna Smith-Volk, Etta Baird-Hiser, Laura Smith-Wiese, Cora Hiser-Bancroft, Tena Gunn and Ida Little. In the last row, from left, is Flo Cole-O'Harra, Flossie Hyde, Ella Cole, Zelpha Squires-Wallace and Truly Fink. 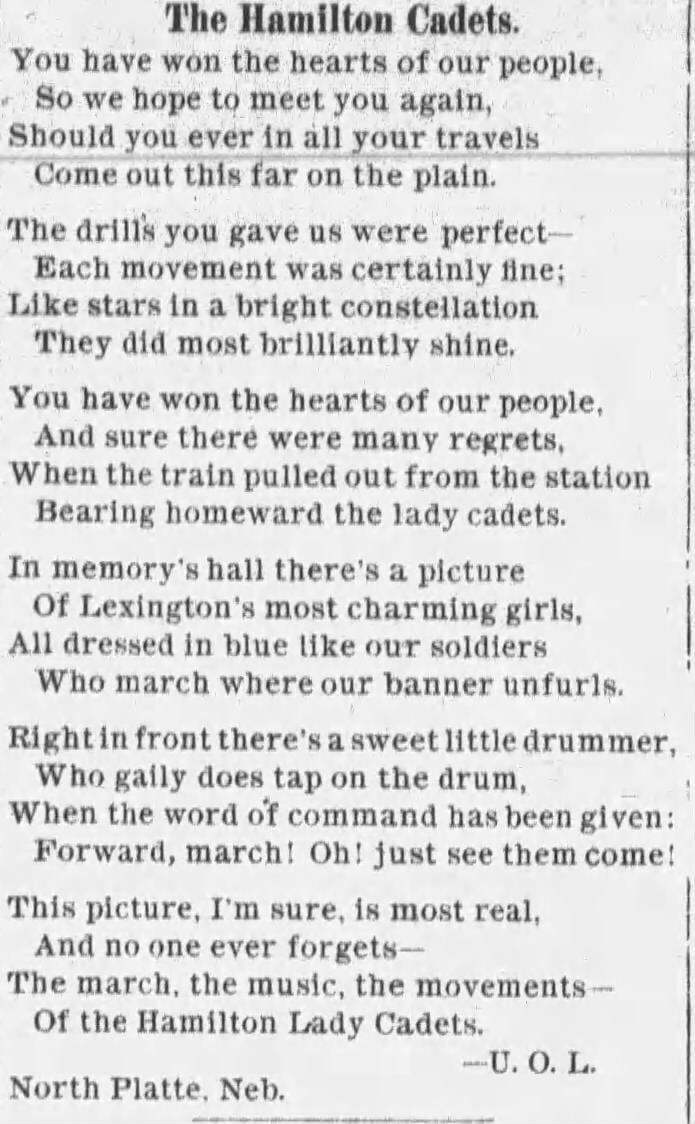 This ode to the original Lexington edition of the Hamilton Cadets all-female military drill team appeared in the Dawson County Pioneer on Oct. 24, 1896, 12 days after its last major performance at the state irrigation fair in North Platte. 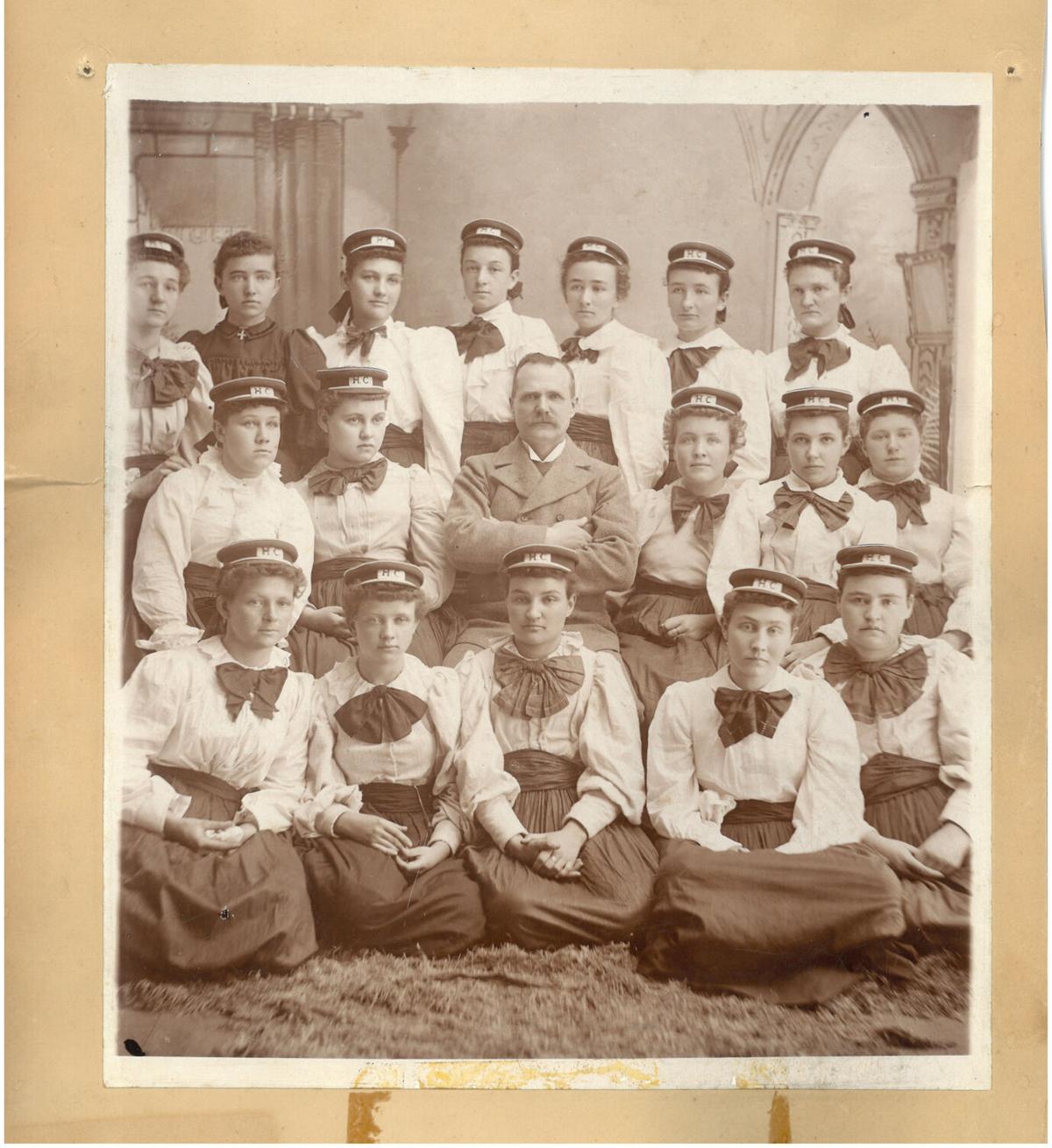 Director William H. Hamilton sits in the center of this photo of his original all-female Hamilton Cadets military drill team in Lexington, based at the city’s high school, which performed from 1894 to 1896. Its exploits included performances at the Nebraska National Guard-Grand Army of the Republic encampment at Hastings in 1895 and 1896, the 1896 Nebraska State Fair in Omaha and an October 1896 irrigation fair in North Platte.