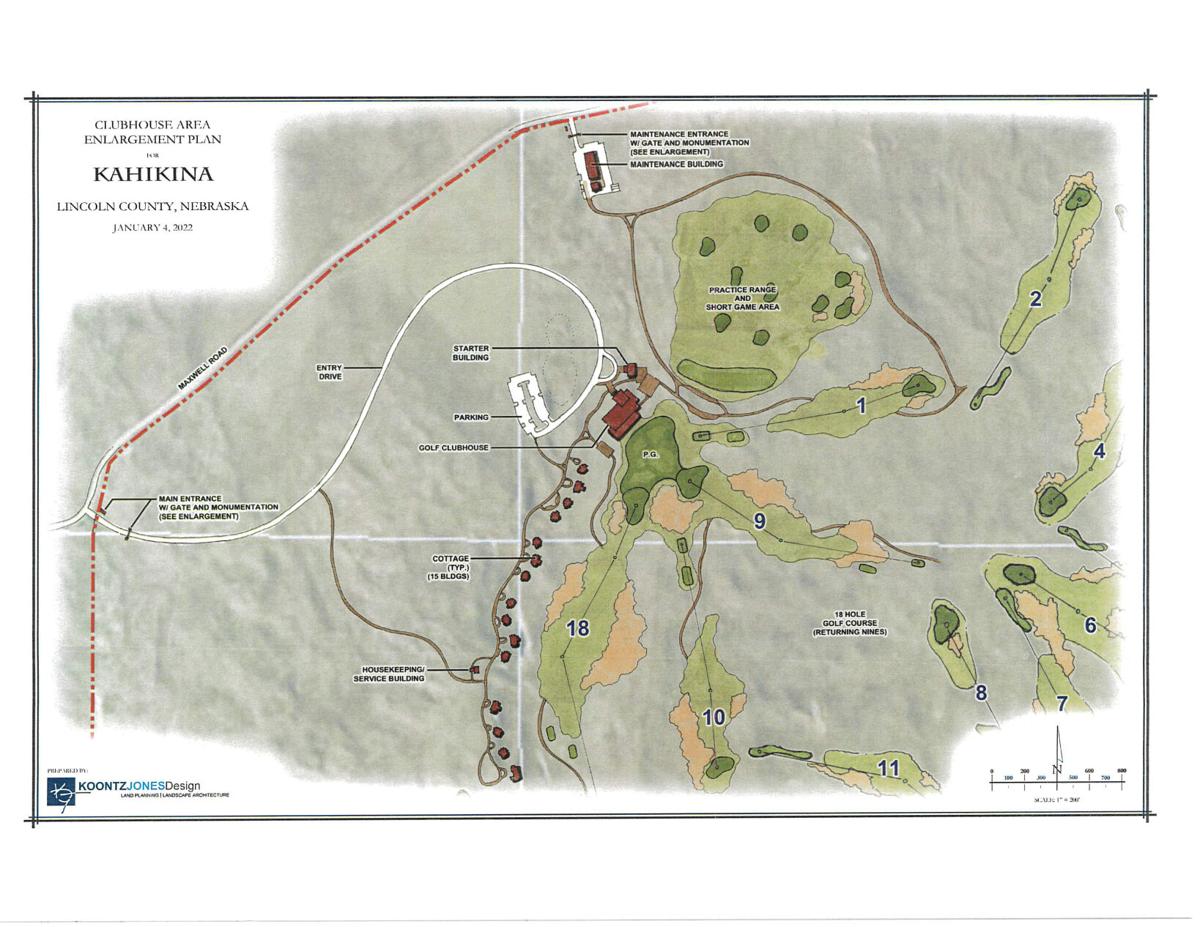 This conceptual design by KOONTZ JONES Design of Southern Pines, North Carolina, shows the entrance, clubhouse area and westernmost holes of a proposed 18-hole private golf course north of Maxwell. North Maxwell Road can be seen to the left as it curves northeast. 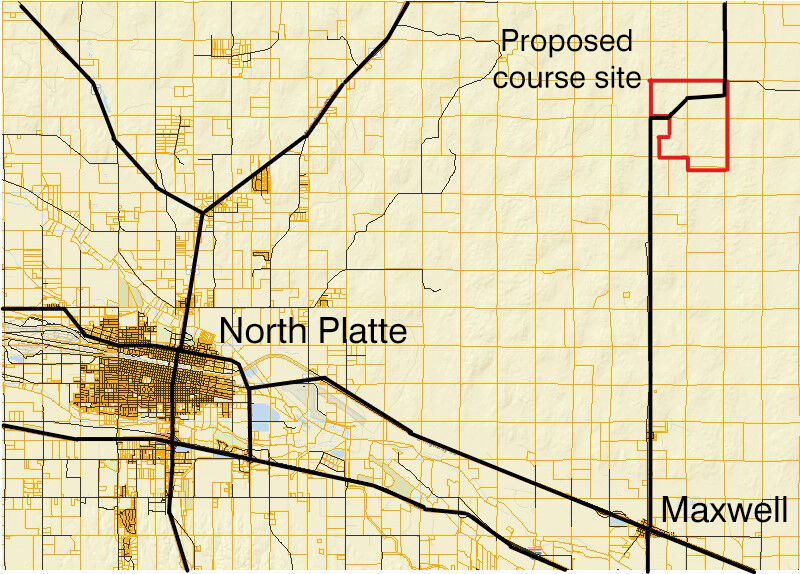 The area enclosed in red shows the proposed location of an 18-hole private golf course about 11 miles north of Maxwell. North Maxwell Road (vertical at right) angles through the site before continuing north to the Lincoln-Logan county line.

UPDATED, Jan. 13, 2022, 10 am: Updated to state that county Planning Commission vote amounted to county approval of the golf course and that developer must negotiate with commissioners to extend paving.

Members of the Lincoln County Planning Commission Tuesday endorsed a Lincoln firm’s interest in building what it calls a “world-class” 18-hole private golf course about 11 miles north of Maxwell.

After a public hearing, the 11-member panel unanimously voted to grant a conditional use permit allowing the course to be built off North Maxwell Road.

The plan would make that course the seventh in a group of private joint-membership courses nationwide.

The Planning Commission’s positive vote clears the way for Kahikina LLC’s plan from the county's perspective, said Judy Clark, planning administrator for both the city of North Platte and Lincoln County.

Documents filed with the firm’s permit application say Kahikina would buy three full sections and parts of two other sections from Olson Farms Inc. of Hershey.

Turning them into a “world class private golf destination” would bring “a promising economic boost to the community,” Kahikina said in its application.

The course would include a 10,000- to 12,000-square-foot clubhouse and restaurant, a maintenance facility and 60 beds of “overnight lodging” for golfers who want to stay there, it said.

Though it would host golfers only from April to October, “agronomic personnel” and other key staff would work there year-round “to ensure the course is well maintained even during the off-season.”

Kahikina estimated 60 golfers would play the planned Maxwell-area course each day during the season, with a maximum capacity of 120.

The course would serve 5,000 customers a year when it opens, it said, rising to 7,200 annually. Kahikina has a goal of housing at least 6,000 customers annually in its planned lodging.

County Highway Superintendent Carla O’Dell said in a Dec. 22 letter that she had been contacted by Lincoln-based Dormie Network about the golf course project.

Dormie operates the private 18-hole ArborLinks course in Nebraska City as well as courses in Indiana, New Jersey, North Carolina, Texas and Virginia, according to its website.

Golfers who buy a membership in Dormie Network gain access to all golf courses in that network, Dormie’s website says.

Dormie Network LLC was organized in February 2018, and the nonprofit Dormie Network Foundation followed suit in July 2020, according to Evnen’s office.

O’Dell’s letter said the pavement on North Maxwell Road, which turns east and then northeast to go through the proposed golf course site, ends one-half mile before the suggested entrance at the northeast turn.

The unpaved portion is graveled and maintained weekly, but it’s “mostly a sand base and when hot and dry tends to blow out with heavy traffic,” O’Dell wrote.

Even organizers’ estimated traffic of 15 to 20 vehicles per day “can still make a significant impact on that type of road,” she added.

Board members of the North Platte Area Chamber & Development Corp. endorsed the project at a meeting Tuesday, President and CEO Gary Person said.

Person linked the Maxwell project to the Dormie Network in a supporting letter to county Planning Commission members.

“Dormie has an outstanding reputation for doing developments the right way,” he wrote. “This (project) will allow us to show off the beauty and serenity of our rolling geographic characteristics and expose our community’s strengths to embrace development opportunities to new visitors from different parts of the United States.”

Person added that “most destination golf courses located in the Sandhills” already use the North Platte Regional Airport at Lee Bird Field to bring in players.

Dormie’s Maxwell-area project is “a natural fit to expand” such regional offerings, he said. “It also makes sense to have one closer to North Platte.”

Throughout a year marking the 80th anniversary of North Platte's World War II Canteen, reporter Todd von Kampen told the story of the Kansas National Guard unit that spurred that -- as well as many more stories that shed light on North Platte's past.

After North Platte, the Canteen's founding visitors went on to World War II

We arrived in camp about 11 o’clock yesterday morning. ... (My tentmates) are all Dodge City boys and the best bunch of fellows in camp. It wo…

On this day 125 years ago, the first issue of the Daily Telegraph hit the streets

First newspaper published in North Platte is long gone, but its legacy lives on

If any North Platte issues of the Frontier Index survive, they haven’t been found. But digital newspaper archives have confirmed when our city’s press history truly began.

Nothing remains of the cabins, stables and Pony Express station where the Nebraska City brothers planted roots in 1859 rather than continue to Colorado’s gold fields. But the memory of the spot lives on.

Meet the man who takes care of Punxsutawney Phil

Meet the man who takes care of Punxsutawney Phil

Update: Man arrested in one of two Friday night shootings

No one had been arrested as of Saturday afternoon, with investigations ongoing, according to a media release by North Platte Police Chief Steve Reeves.

Wagner has been a critic of the district over the past couple of years because of its mask requirements for students.

The canal almost lost to time

In 1894, Perkins County residents began work on an ill-fated South Platte River canal from Ovid, Colorado, into Nebraska, the remnants of which can be seen today, if you know where to look.

Watch now: 'It's been an adventure': North Platte animal control officer has encountered just about every animal you can think of

A 23-year-old North Platte man is charged with two felonies in connection with a shooting Friday night at the Money Train Skill Arcade.

“It’s something I felt Nebraska should have dealt with for a long time,” says Kent Miller, the longtime Twin Platte Natural Resources general manager said about Nebraska asserting its water rights in a 1923 compact with Colorado.

Bringing Lee Bird Field into North Platte can be done while accommodating nearby hunting and agricultural activities, Planning Commission memb…

A mainstay in downtown North Platte will be moving sometime in April.

This conceptual design by KOONTZ JONES Design of Southern Pines, North Carolina, shows the entrance, clubhouse area and westernmost holes of a proposed 18-hole private golf course north of Maxwell. North Maxwell Road can be seen to the left as it curves northeast.

The area enclosed in red shows the proposed location of an 18-hole private golf course about 11 miles north of Maxwell. North Maxwell Road (vertical at right) angles through the site before continuing north to the Lincoln-Logan county line.