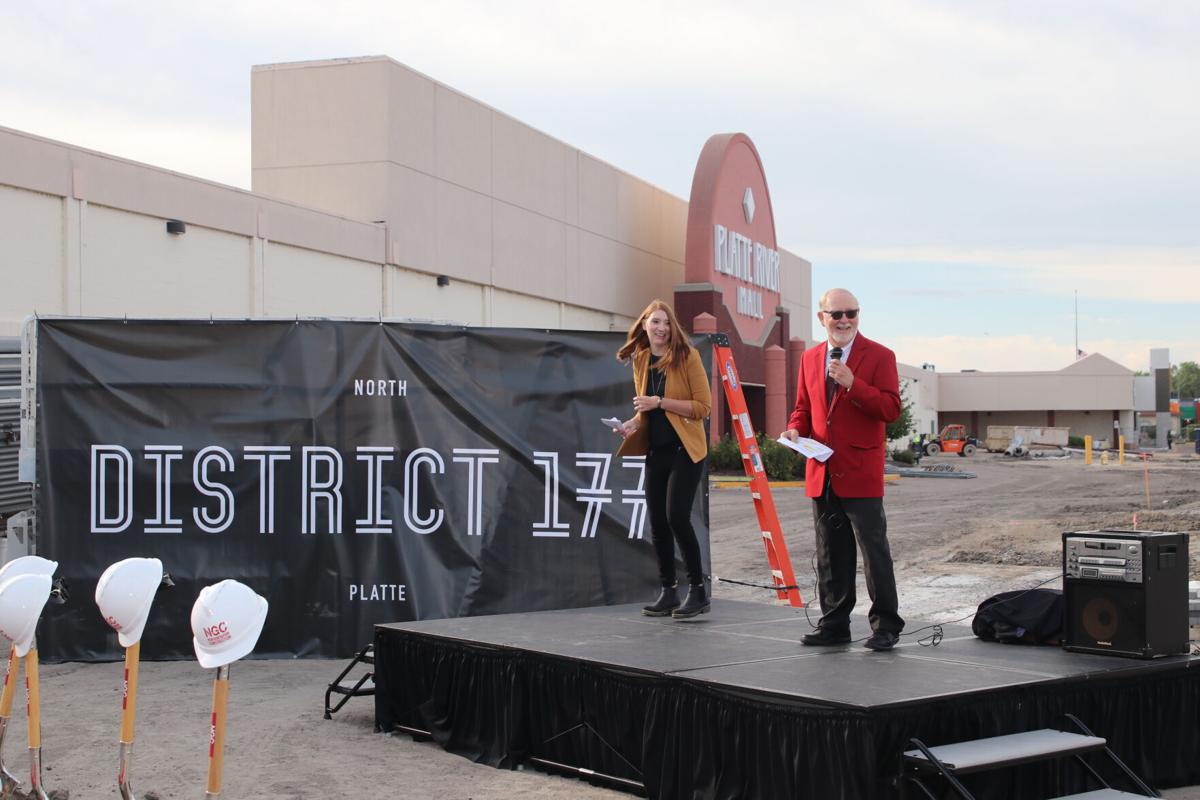 This image provided by Eleanor Creative shows what a banner in the District 177 parking lot may look like.

Call it a groundbreaking for the second act for North Platte’s 1972 mall.

But the familiar scene of VIPs wearing hard hats and bearing shovels also served to unveil a page-turning new name — District 177 — for the shopping center known as simply The Mall for its first one-third of a century.

The name links the number of North Platte’s main Interstate 80 exit to the one-time regional hub’s new identity and purpose, speakers said on a stage just north of where the mall celebrated its grand opening on April 12, 1972.

Behind them, visitors could see the first poured footings for the four-story apartment-commercial building that will become the site’s new showcase as well as a new home for the remaining stores on the main mall’s north side.

“We wanted this destination to not just be for people in North Platte but to be for people that are passing through,” as in the mall’s first years, said Christine Weeks, CEO of Lincoln’s Eleanor Creative design firm.

“You have your Canteen District now” downtown, “and now we wanted another district — it’s a community within a community.”

Cassie Condon, a former Platte River Mall manager, beamed as she introduced the speakers. She served as master of ceremonies in her current role as vice president of economic development and marketing for the North Platte Area Chamber & Development Corp.

“This is rural America, where — supposedly — recruiting brand-name retail stores is a thing of the past and where once flourishing malls entered the ice age, becoming extinct dinosaurs,” he said.

But Rev co-owners Mike Works and Justin Hernandez, North Platte-based NebraskaLand Bank and a 4-3 City Council majority made “the impossible and (the) financing become possible,” Person told the crowd.

“Who says one vote doesn’t matter?”

Mayor Brandon Kelliher recalled how he was “a little tiny kid when the mall was built” and worked at its former Sports Shoppe store as a youth.

“I remember (that) a great part of the activities of this community were at this mall,” he said. “It is very exciting this mall continues its life when so many malls are closing.

“We’re reusing our resources. ... It’s a great time to be in North Platte.”

Person recalled residents’ pain at watching the mall’s long, slow decline accelerate into a crisis. Several national “big-box” brands left the mall or failed entirely between 2017 and Works and Hernandez’ purchase of the mall last November.

“Mix in the COVID pandemic bringing America to its knees, and a stark and bleak situation turned worse than what we could have imagined,” Person said.

“Out of the darkness emerged this great plan and some young energy that was determined to breathe new life into it. We can’t wait until the recipe continues to bear more fruit.”

Person also applauded the mall project’s enthusiastic backing from the North Platte Downtown Association, which led the way in transforming and rebranding the city’s historic business heart as the Canteen District.

“While previous generations saw the mall and the downtown at odds, the (association) and their great small business members stood up and threw their support behind it as well,” he said. “That’s what you call a true sense of community.”

Weeks and Sean Flattery, creative director of Eleanor Creative, described the research and thinking behind the mall’s rebranding as District 177.

The new logo’s lettering evokes North Platte’s welcoming attitude toward tourists and the highways leading to the mall from the I-80/U.S. Highway 83 interchange, Flattery said.

It’ll go with a “Exit Ordinary” subtheme, he added. “When you get off Exit 177, you encounter a community that is truly unique, beyond ordinary.”

Works said Rev is continuing lease negotiations with new tenants for the main mall — now being converted into an outward-facing “strip mall” — and new outbuildings that will surround it.

“It’s just like construction,” he said. “It takes longer than you wish it would.”

Inside the main mall, the din of building equipment could be heard from behind the drywall blocking off the future Dunham’s Sports location between the Buckle and Ashley HomeStore.

The south end of the mall’s main promenade and the former store bays on both sides have been gutted for Dunham’s eastward-facing store.

Similar conversions will follow on the north end once the stores now concentrated there can move to the ground floor of the new four-story building.

New Generation Construction of Lincoln will pour foundation slabs for that building in early October, Works said. Work on Nebraskaland Tire & Service’s new store will start next month as well.

'Concerning' asteroid will break into Earth's orbit in a week: NASA

'Concerning' asteroid will break into Earth's orbit in a week: NASA

While North Platte saw the warmest fall on record, the coldest is yet to come

UPDATED, Dec. 1, 9:30 am -- Daily high for Nov. 30 and September-November average high updated to reflect official Nov. 30 high as recorded by…

With no debate and a unanimous Community Redevelopment Authority vote, Sustainable Beef LLC’s plan to build a meatpacking plant atop a retired…

The Christmas Village originated at Memorial Park in 1947 with five houses and has grown to 15 houses this year. The display was moved to Cody Park in 2003.

Families 1st Partnership of North Platte has received a $5,000 grant from the Medica Foundation of Minneapolis to help low-income residents ge…

This image provided by Eleanor Creative shows what a banner in the District 177 parking lot may look like.