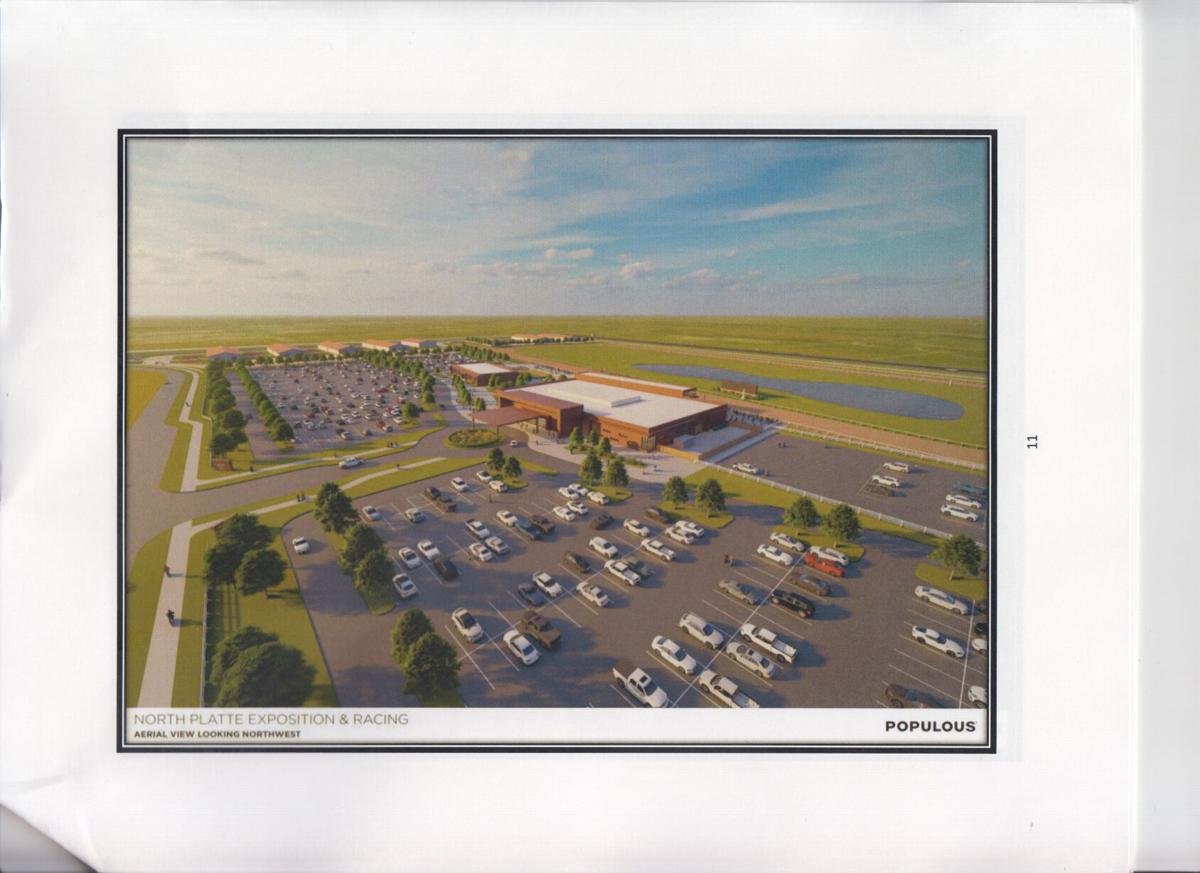 This artist’s rendering shows North Platte Exposition and Racing Inc.’s proposed horse track and casino looking northwest from East Walker Road toward the city. The casino, shown at center, wouldn’t be built until the horse track is established and the Nebraska Racing and Gaming Commission grants it a separate gaming license. 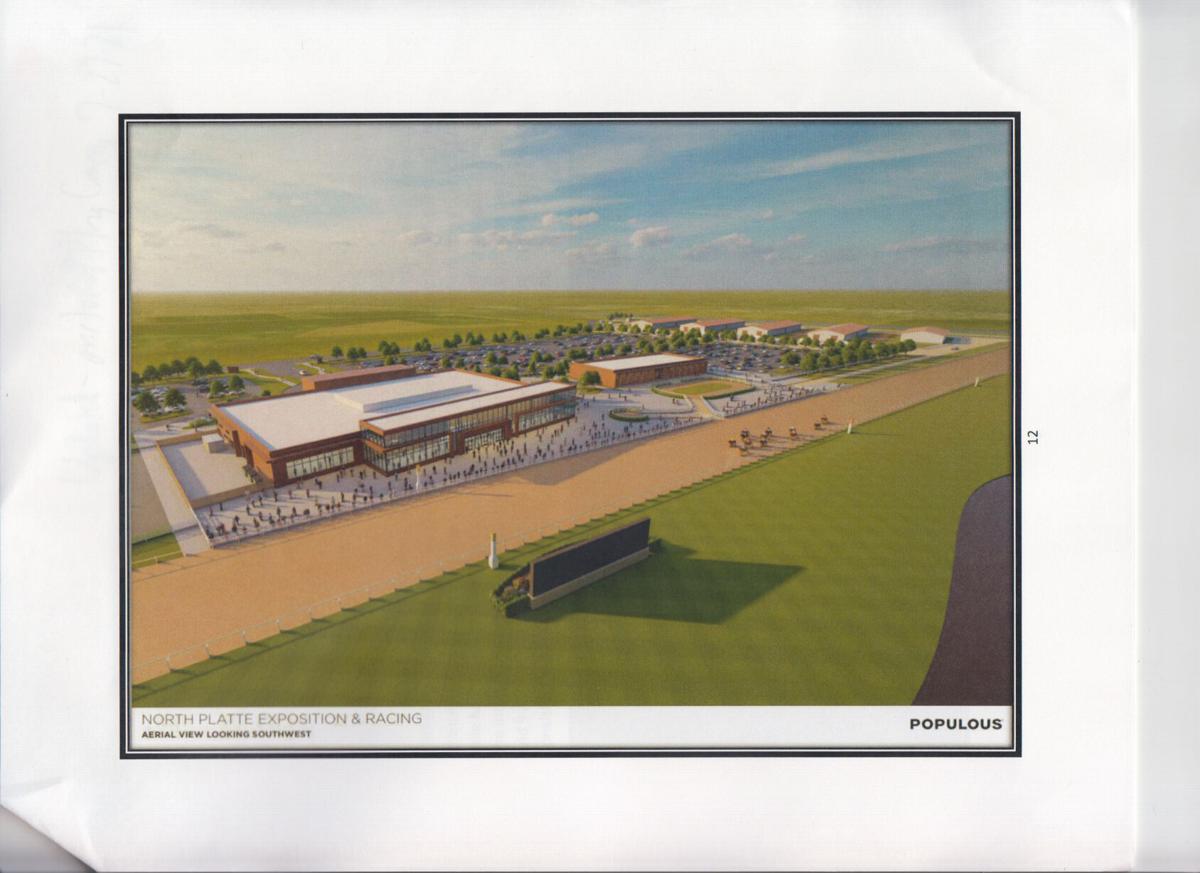 Another artist’s rendering of North Platte’s proposed horse track and casino looks southwest from Interstate 80, showing quarter horses riding down the homestretch in front of the eventual casino. 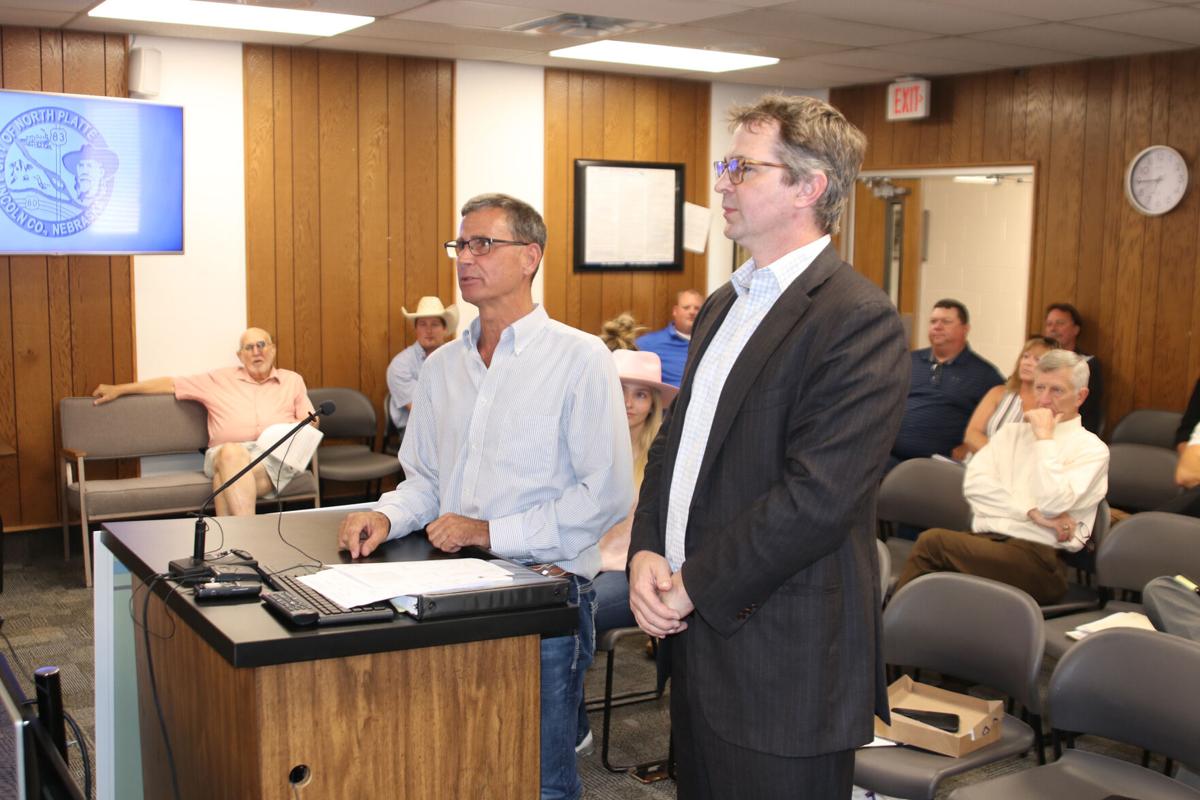 Brian Becker of Hastings (left), president of North Platte Exposition and Racing Inc., explains his group’s proposal for an Interstate 80 horse track and eventual casino with fellow board member Brian Jorde of Omaha.

The nine-member panel voted 6-0, with three members absent, to recommend approval of a conditional use permit at the council’s Aug. 17 meeting.

North Platte Exposition and Racing Inc. proposes a five-eighths-mile oval track, identical to the size of Grand Island’s Fonner Park track, so it could offer either quarter horse or thoroughbred racing.

Once the track is established, the fledgling firm would build a 32,000-square-foot casino with 650 electronic games, table games and areas for betting on sports events and simulcast races from other tracks.

Council approval next month wouldn’t guarantee horse racing or casino gambling in North Platte. The Nebraska Racing and Gaming Commission would have to grant separate horse-track and gaming licenses.

No one spoke against the project during an hour-long public hearing, though some urged city leaders to make sure taxpayers don’t foot the bill to improve inadequate infrastructure.

North Platte Exposition and Racing Inc. will see to it that East Walker Road and water, sewer and electrical services are built or improved to city specifications, said board member Brian Jorde.

“We will do that at our cost. We commit to that on the record here,” said Jorde, an Omaha lawyer and the new firm’s registered agent.

Several former or current owners and breeders of racing quarter horses cheered the project. Two came from Colorado to show their support in addition to others closer to North Platte.

“In this location, this is very promising,” said Tanner Isaacs, farm manager for Vista Equine Colorado LLC near Fort Collins and a Rocky Mountain Quarter Horse Association board member.

He said quarter horse owners from as far away as Idaho and Utah would be drawn to race in North Platte. We have “a lot of breeders looking for places to race.”

“We see this as a magnet, not just for western Nebraska but for the states that are frankly hungry for this,” Jorde said.

Jorde did most of the talking for his board, occasionally joined by President Brian Becker, daughter Breann Becker and Cynthia Smith, the track’s designated director of racing.

Becker’s other daughter, Brooke, completes the board and also attended Tuesday’s meeting. Except for Jorde, all board members are from Hastings.

Two representatives of project associate Global Gaming Solutions LLC, which runs horse tracks and casinos for the Chickasaw Tribe of Oklahoma, were present but didn’t speak.

Brian Becker, a longtime quarter horse owner and breeder, has operated a one-day quarter horse meet at Hastings’ FairPlay Park since 2004. He declined comment after the meeting, referring questions to Jorde.

Besides the North Platte track, the five board members have proposed a similar track and casino just south of Gering as Scottsbluff Exposition and Racing Inc. Consideration by Gering city officials will start in September.

During the hearing, Brian Becker and Jorde stressed that the North Platte track would start with a single day’s quarter horse meet. But it plans to gradually grow its calendar to 30 full-card racing days by the fourth year.

“We’re not going to run one race, one day,” Jorde said. “That doesn’t do the breeders or owners any good.”

Brian and Breann Becker said their family’s Hastings track never could put enough purse money in for more racing days before voters allowed casinos to be added at tracks.

Having a casino will make that possible, they said, adding they plan to add one in Hastings and also ramp up to 30 racing days there and in Gering if the state commission agrees.

“We’re not going to be at one race a year, either in Hastings or here,” Brian Becker said.

She predicted that the existing eastern Nebraska thoroughbred tracks will need casinos more than her family’s tracks will over time.

“You’re going to see some of these (thoroughbred) tracks go down, and there’s only five of them,” she said.

“We know the political reality is there’s going to be something built west of Grand Island,” Person said.

“Right now, North Platte’s at the top of the list, but I know there are other communities that would like to come after something like this.”

Some speakers urged organizers to offer multiple race days and both thoroughbred and quarter horse racing immediately to improve the track’s chances of success with or without a casino.

“The presentation that they put out, it’s wonderful,” said Travis Kuenning, 201 S. Maloney Drive. “I would just ask that we hold their feet to the fire.”

The track could handle both, but it’s up to the state commission to decide whether to allow both, Jorde said.

Ed Mueller, 602 S. York Ave., said he wants to see a successful horse track. But he’s afraid the casino would be built and overshadow the track before horse racing could make it on its own.

Local speakers on the infrastructure topic said they don’t oppose the horse track-casino plan. But they contended that the city should have widened Walker Road and upgraded city services along it when Flying J Travel Plaza was built about 15 years ago.

“Not a single dime would be paid by the taxpayers of this town” to do so now, said Greg Renner of 19124 Osage Court.

Alan Erickson of North Platte, who would sell the track site to Becker’s group, said he paved East Walker Road and installed other services about that time according to then-current regulations.

“The city wanted a Taj Mahal road, but they didn’t want to pay the difference,” said Erickson, who owns other land along the street.

Mueller also said the track’s backstretch would be dangerously close to I-80, setting up safety risks to horses and jockeys from traffic noises.

“It’s easy to spook a racehorse,” he said.

He proposed a tall fence to screen off both the interstate and its noises from human and equine competitors.

That could be done, Jorde replied, though the track itself also could be moved within the 70-acre-plus site. If it takes a fence, “tell us how high the fence needs to be.”

Planning Commission members asked several questions about project details, but member Jeff Bain offered the panel’s only comment about the desirability of the project itself.

“Well, it sure beats going to Rosebud to do it,” Bain said, referring to the casino on South Dakota’s Rosebud Indian Reservation north of Valentine.

North Platte police are investigating after a dead female was found in a residence Saturday.

“I regret it, but I can’t take another year like this,” Commissioner Bill Henry said of his decision to resign. “I’ve done a lot of painful soul-searching and prayerful time these last several weeks, and I’ve got to get out. I really do.”

He announced North Platte’s Buffalo Bill Rodeo at Nebraskaland Days for the 40th time in June.

The man refused to speak with investigators before his arrest. He is being held without bail.

The fight seemed to be prompted by the social media platform that has recently inspired teens across the country — and in Lincoln — to perform "devious licks" by vandalizing school bathrooms and stealing school property.

Over the years, the ride has raised about $240,000 for families of cancer patients, accident victims and others.

Once the pandemic emergency has concluded, the POD will be available for different uses. Currently, the POD is set up in the city parking lot between First and Second streets and Chestnut and Bailey, just south of the Federal Building.

“Despite the rumors going around on social media, the North Platte Police Department has had no reports of a child being abducted from our area, nor is there an active investigation ongoing," said a post on the department's Facebook page.

This artist’s rendering shows North Platte Exposition and Racing Inc.’s proposed horse track and casino looking northwest from East Walker Road toward the city. The casino, shown at center, wouldn’t be built until the horse track is established and the Nebraska Racing and Gaming Commission grants it a separate gaming license.

Another artist’s rendering of North Platte’s proposed horse track and casino looks southwest from Interstate 80, showing quarter horses riding down the homestretch in front of the eventual casino.

Brian Becker of Hastings (left), president of North Platte Exposition and Racing Inc., explains his group’s proposal for an Interstate 80 horse track and eventual casino with fellow board member Brian Jorde of Omaha.