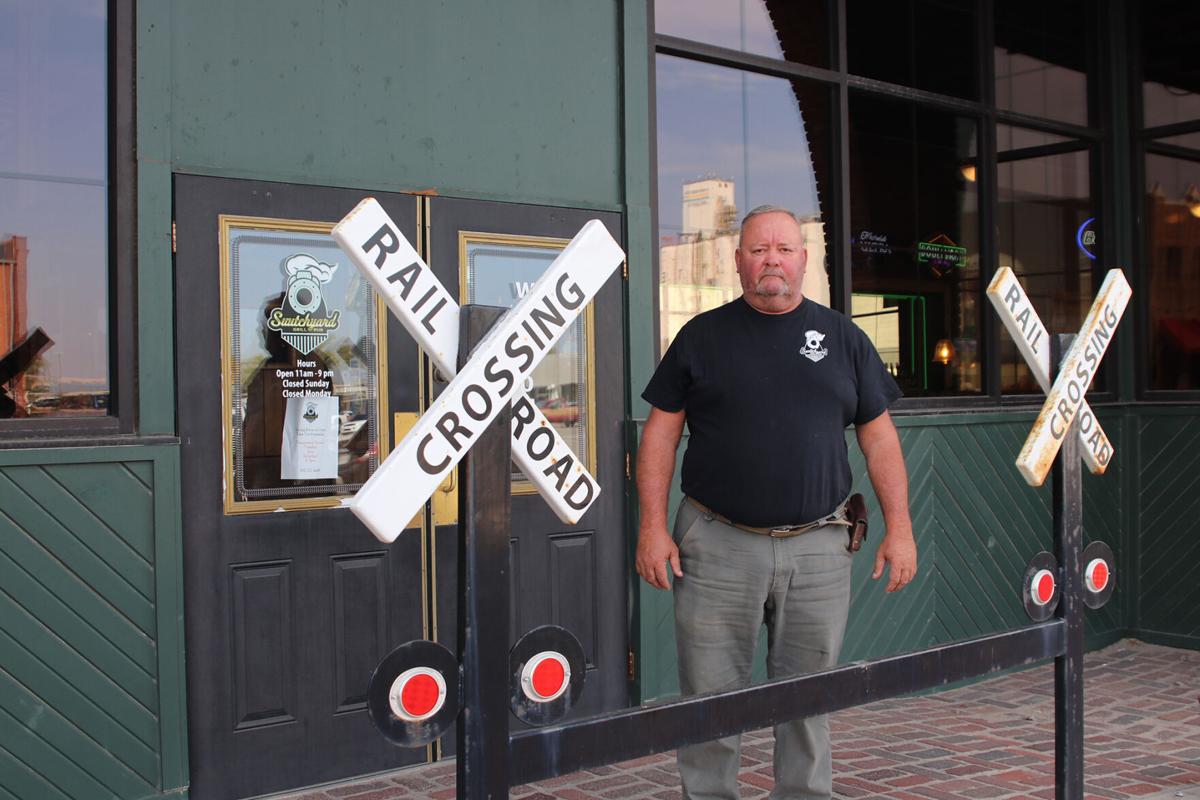 Mark Luttrell of North Platte, who with wife, Dee, renovated the dormant Depot Bar and Grill restaurant into Switchyard Grill & Pub in 2017, used a $30,000 Quality Growth Fund grant to finance tuckpointing and other external repairs to the 1928 building. 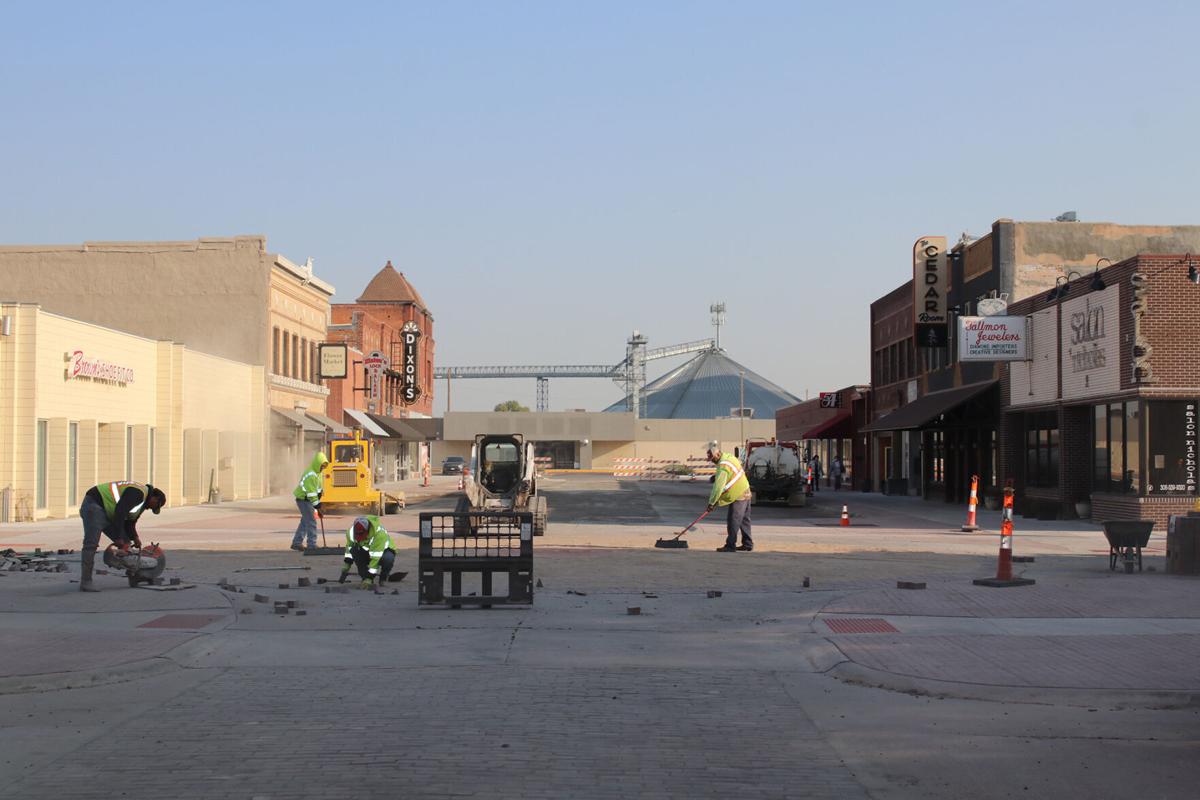 Paulsen Inc. workers trim and place the last 1916 paving bricks surrounding the new circular “Canteen District” seal in the intersection of East Fifth and Dewey streets in downtown North Platte on Monday. In the background, Quality Growth Fund-aided façade restoration projects, notably the 1879 Dixon Building with its replica “legacy” sign and the retro-style sign gracing the 1885 Hinman Building, remodeled and opened this summer as The Cedar Room restaurant.

Being in the construction business, Mark and Dee Luttrell knew what reviving a dormant restaurant in a historic building would take.

Built in 1928 as S&R Service Station, then remodeled in 1980 for a predecessor restaurant, the former Depot Bar and Grill at 520 N. Jeffers St. needed significant work on its street fronts besides its many indoor needs.

North Platte’s Quality Growth Fund helped the Luttrells get there.

A $30,000 grant in March 2017 to the couple, who opened Switchyard Grill & Pub that August, previewed the QGF-aided “Façade Restoration Program” — a key catalyst in downtown’s most thorough renovation in 50 years.

Its transformation into the “Canteen District” highlights how the special reserved sales tax fund is being used to freshen North Platte’s historic heart for new generations of shoppers and visitors, QGF supporters say.

City voters will decide Nov. 3 whether to grant a second 10-year extension to QGF, which they first approved in February 2001 and renewed in November 2010.

“I re-tuck-pointed, which was desperately needed, and (installed) a bigger sign,” Mark Luttrell said. He then rebuilt and repaired the north parapet after the restaurant opened.

They also updated Switchyard’s internal systems, carpeting and windows, the costs of which had hampered previous community efforts to revive the restaurant.

The façade grant freed up enough money in Switchyard’s construction budget “to redo the cooler, which was vital to our operation,” said Luttrell, who employs about 12 people at the restaurant.

He and his wife got their QGF grant when revival of one downtown North Platte icon was well under way but the question of when —or whether — to upgrade the entire district remained unresolved.

Renovation plans were unveiled in 2011 to create today’s Prairie Arts Center in the 1913 Post Office Building at Fifth and Jeffers streets. A three-stage project costing about $1 million per floor culminated with the December 2019 opening of the top floor.

As the City Council was deciding to help the Luttrells, community leaders were nearing a fateful decision to move on from downtown’s last major facelift in the 1970s.

That’s when three blocks of aging buildings and a few on other blocks were torn down as part of a $7 million-plus “urban renewal” project largely paid for with federal funds.

Parkade Plaza, opened in 1978, replaced the northern one-third of downtown across East Front Street from the Union Pacific Railroad. U.P. tore down its 1918 brick depot, home to the World War II Canteen, on its own initiative in 1973.

But by the late 2010s, the canopies needed expensive repairs. Display windows of increasingly vacant Dewey buildings were obscured by the canopies and the grown trees planted during the 1970s project.

After nearly 15 years of studies and debate, council members — who were told tearing down the canopies would cost less than fixing them — voted in May 2017 to take them out.

Chamber officials were working toward proposing a QGF-aided downtown façade program when the Luttrells made their separate $30,000 request, Person said.

Other funding for the program has included $100,000 in federal Community Development Block Grant funds and $25,000 from the North Platte/Lincoln County Visitors Bureau.

Eleven of 72 eligible properties have finished their QGF-aided façade projects. Eleven more have been approved but haven’t started due to the size of bids or availability of contractors, said city Planning Administrator Judy Clark.

That leaves 50 eligible properties — they must be at least 50 years old and have proven historical significance — in the program area bounded by First, Vine, 13th and Walnut streets on both sides of the U.P. tracks.

They can receive up to $10,000 per basic 44-foot lot to supplement their own facelift investment with approval from the city’s Historic Preservation Commission, Clark said. Buildings at intersections or with multiple storefronts or stories can get more.

One of the first finished façade projects, Blakely Enterprises’ 2018 upgrade of the 1879 Dixon Building, features a replica “legacy sign” like the one that marked the building for decades.

Venerable Hirschfeld’s, a downtown fixture since 1917, unveiled its facelift to the 1910 Elks Building in 2019. This year has seen renovations to the 1885 Hinman Building, home to the new Cedar Room restaurant, and the neighboring 1907 Hahler Building.

Buildings with finished façades also include the 1915 Reynolds/Tramp Building, home to The Flower Market since Sarah and Tom Talbott bought it in 2017.

Sarah Talbott, president of the North Platte Downtown Association, said the couple put more than $80,000 into masonry work and new windows and awnings on their two-storefront, two-story building.

Their $40,000 reimbursement check from QGF arrived as they finished this summer, she said. They were approved in 2018 but “had a heck of a time finding masons and getting (construction) help with the windows.”

The couple might have waited longer to tackle their storefront, “but how do you not take advantage of that opportunity?” Sarah Talbott said.

With interest and momentum building — and storefronts refilling as work went on — city officials and downtown leaders committed last winter to make 2020 the big push for their “renovations in progress.”

Work is nearly done on the 7½-month, $2.81 million reconstruction of six blocks of downtown streets, including sidewalk, water and sewer upgrades and removal and resetting of the district’s 1916 paving bricks. A seventh block was rebuilt in a 2012 pilot project.

City taxpayers and federal CDBG funds are covering that “street and below” work, but the “street and above” beautification about to commence is being backed with up to $500,000 in QGF funds.

The Downtown Association will be reimbursed for the benches, planters, festoon lighting and other decorative touches its members are shaping with city leaders.

“We are trying to take a lot of care and time and make a lot of decisions that will be longstanding and timeless,” Talbott said.

All should be in place by next spring, when new trees, bushes and greenery can be planted, she added.

Thanks to QGF’s assistance, Talbott said, future visitors will see full storefronts in a brighter downtown — one listed this past summer, with the 1970s canopies gone, on the National Register of Historic Places.

“We use QGF to make a downtown that the people of North Platte can patronize and be proud of,” Talbott said.

How other Nebraska towns use LB 840

Seventy-four Nebraska cities or villages reserve tax dollars for economic development under LB 840, according to the Nebraska Department of Economic Development.

The Quality Growth Fund Citizens Review Committee will be meeting on Monday to discuss the next stage of the downtown renovation project, as well as a proposed loan for the Parkade Plaza's purchase.

Proponents of renewing the city's Quality Growth Fund say it has helped businesses thrive throughout North Platte during its 20 years.

Among the items to be discussed at Tuesday's regular City Council meeting are officially changing the vaping/smoking age in North Platte to 21 and a two-year contract with city firefighters.

From Beyond Envy to Bible Supplies in Westfield to the Flower Market and the Switchyard downtown, the resources provided by the Quality Growth Fund helped keep businesses alive during the pandemic shutdown.

Quality Growth Fund at 20: Investing in the future through economic development

City voters will decide Nov. 3 whether to grant another decade to QGF, which has aided a variety of economic development projects allowed by 1991’s Legislative Bill 840.

The season-long “bricks” renovation kicked off Feb. 24, when the city closed East Sixth from Jeffers to Chestnut streets for Paulsen’s workers to break up old concrete and plow up the paving bricks installed in fall 1916.

Mark Luttrell of North Platte, who with wife, Dee, renovated the dormant Depot Bar and Grill restaurant into Switchyard Grill & Pub in 2017, used a $30,000 Quality Growth Fund grant to finance tuckpointing and other external repairs to the 1928 building.

Paulsen Inc. workers trim and place the last 1916 paving bricks surrounding the new circular “Canteen District” seal in the intersection of East Fifth and Dewey streets in downtown North Platte on Monday. In the background, Quality Growth Fund-aided façade restoration projects, notably the 1879 Dixon Building with its replica “legacy” sign and the retro-style sign gracing the 1885 Hinman Building, remodeled and opened this summer as The Cedar Room restaurant.