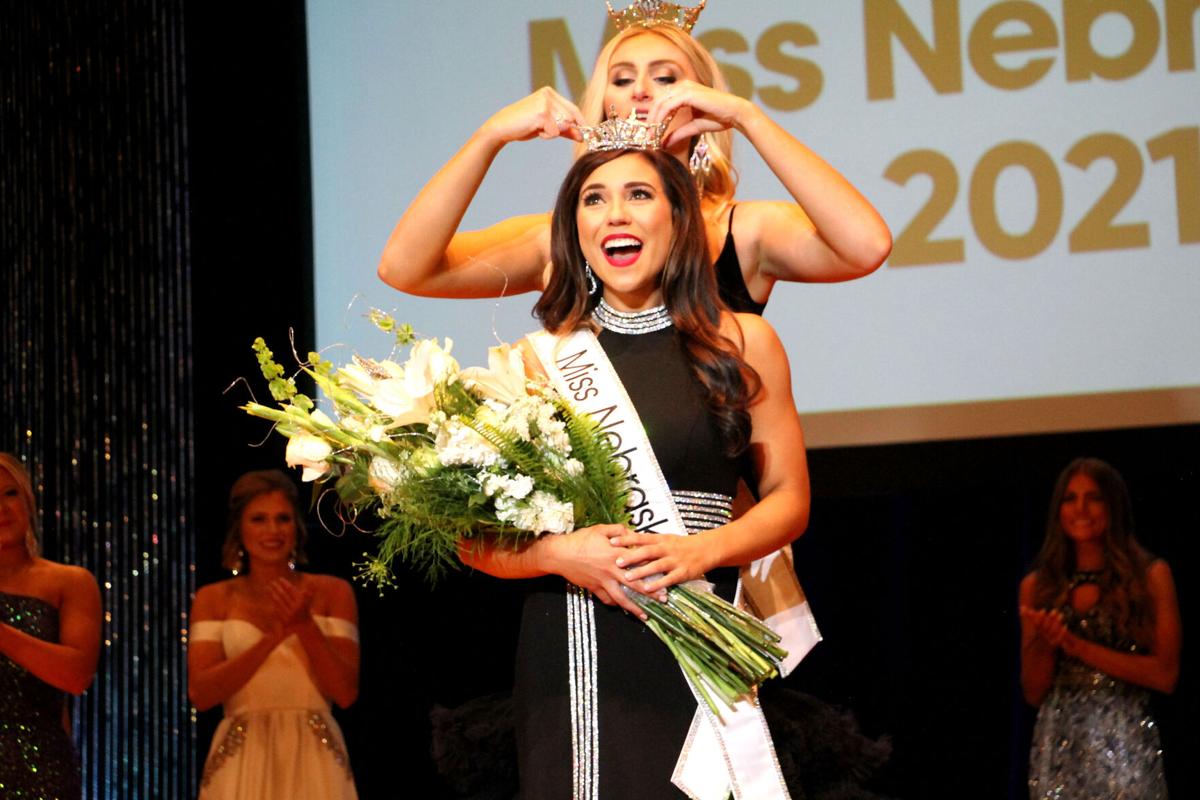 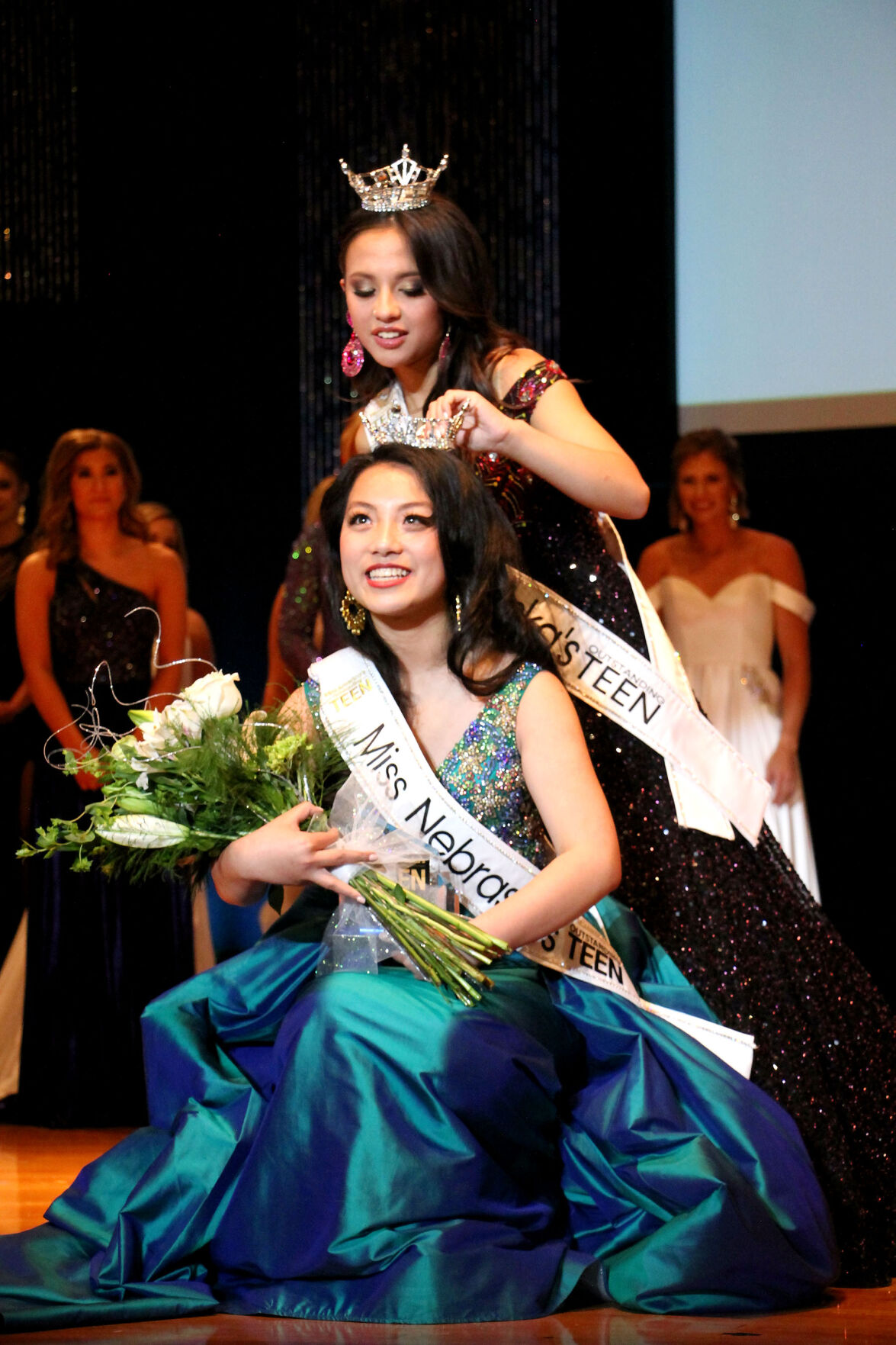 A two year gap between competitions increased the excitement as Morgan Holen, Miss Omaha, was selected to represent the state as the 2021 Miss Nebraska on Saturday night at the North Platte High School Performing Arts Center.

Miss Nebraska’s 2021 Outstanding Teen was also selected during the combined program and Jamie Rose Chen, Miss Scotts Bluff County Outstanding Teen, will wear the crown for the next year.

The judges spent time throughout the week interviewing the candidates and watching them perform in a high pressure situation on stage. That process took the women to a conclusion that empowers young women with the opportunity to reach their goals.

“It is indescribable,” Holen said. “I’ve wanted this since I was 3 years old.”

Holen said she has watched and taken part in the Miss Nebraska organization in various capacities all her life.

“To say this is a dream come true is a complete understatement,” Holen said. “It is everything I could have ever imagined.”

Waiting for two years for the competition was difficult, but her family was very supportive, Holen said.

“I have a family that was very solid and believed in me every day,” Holen said, “even on those tough days they hung in there and were continually there to support me. I would not be here without them.”

Holen follows in the footsteps of her mother, Jodi Miller Holen, who won the 1988 Miss Nebraska title.

“I’m so excited, I’m so excited for her,” Jodi Holen said. “I know what it’s like. You would never want to try to convince a child to do this, they have to want to do it because it’s a job.”

Jodi said her daughter has wanted to make sure she was her best self before she came to the stage to compete.

The 2021 Outstanding Teen winner said she was excited as well.

“I’m still coming off that emotional high,” Chen said. “I think what I’m most looking forward to this year is this year of service.”

Chen said she competed for her social impact statement and its purpose.

The top eight in each competition were announced at the beginning of the evening and each performed in talent, evening wear and on-stage question.

Miss Nebraska 2021 will receive $22,850 in cash awards as well as over $1.5 million in College scholarships offered. Holen will compete in the 100th anniversary Miss America Competition in December 2021 in Uncasville, Connecticut, at the Mohegan Gaming and Entertainment’s flagship property.

Couldn't make it to the finals? We got you covered

Watch Now: What will it take to keep schools open?

As Omicron Spreads, Americans Are Going To Work Sick

As Omicron Spreads, Americans Are Going To Work Sick

As the saying goes, North Platte Police Officer Matthew Proehl just happened to be in the neighborhood.

Update: Man arrested in one of two Friday night shootings

No one had been arrested as of Saturday afternoon, with investigations ongoing, according to a media release by North Platte Police Chief Steve Reeves.

Two 16-year-old boys are charged with multiple felonies in connection to stolen vehicles and weapons in an incident that began Monday in Minatare.

Watch now: 'It's been an adventure': North Platte animal control officer has encountered just about every animal you can think of

Next North Platte High School principal looking forward to getting 'plugged in' to community, with staff

North Platte High School’s next principal says his first steps toward the move will include getting “plugged in” and connecting with staff.

A Cambridge man is in critical condition after being shot by a sheriff's deputy whom he struck with his vehicle, the Red Willow County attorney says.

Wagner has been a critic of the district over the past couple of years because of its mask requirements for students.

Thanks to microTIF, more change ahead for upper floors in North Platte's downtown

Brady Village Board Chairman Todd Roe will run for the Lincoln County Board, giving the lengthy 2022 ballot for county government its first pr…