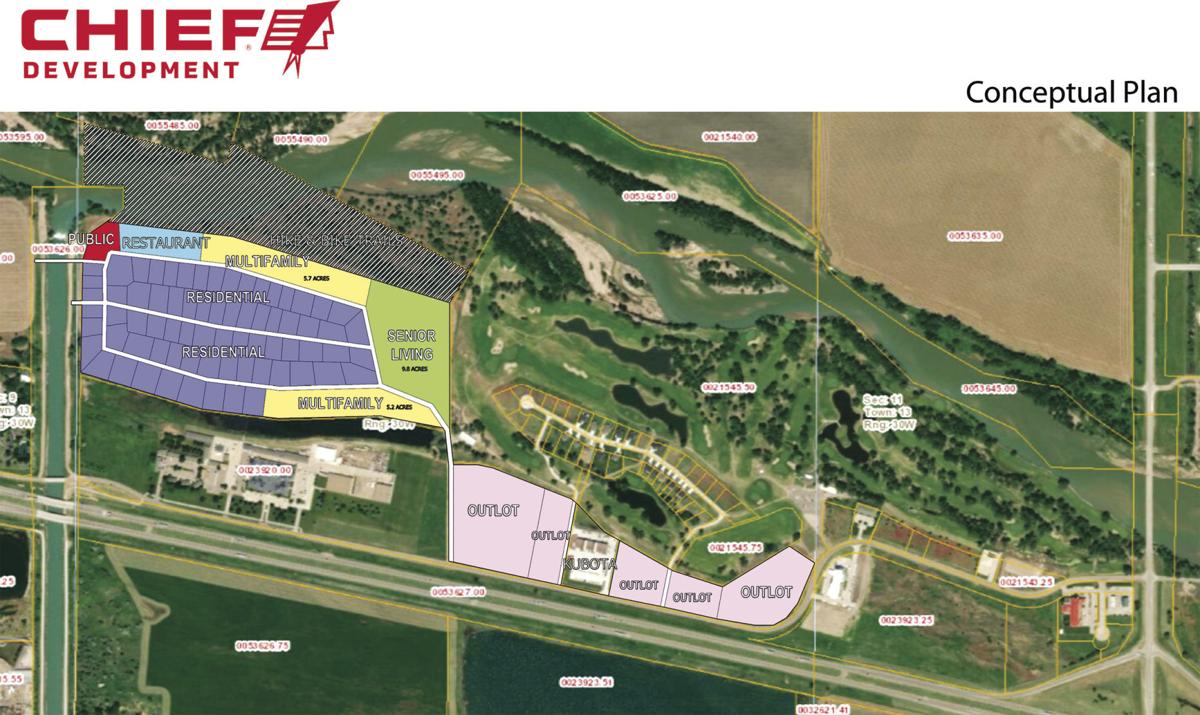 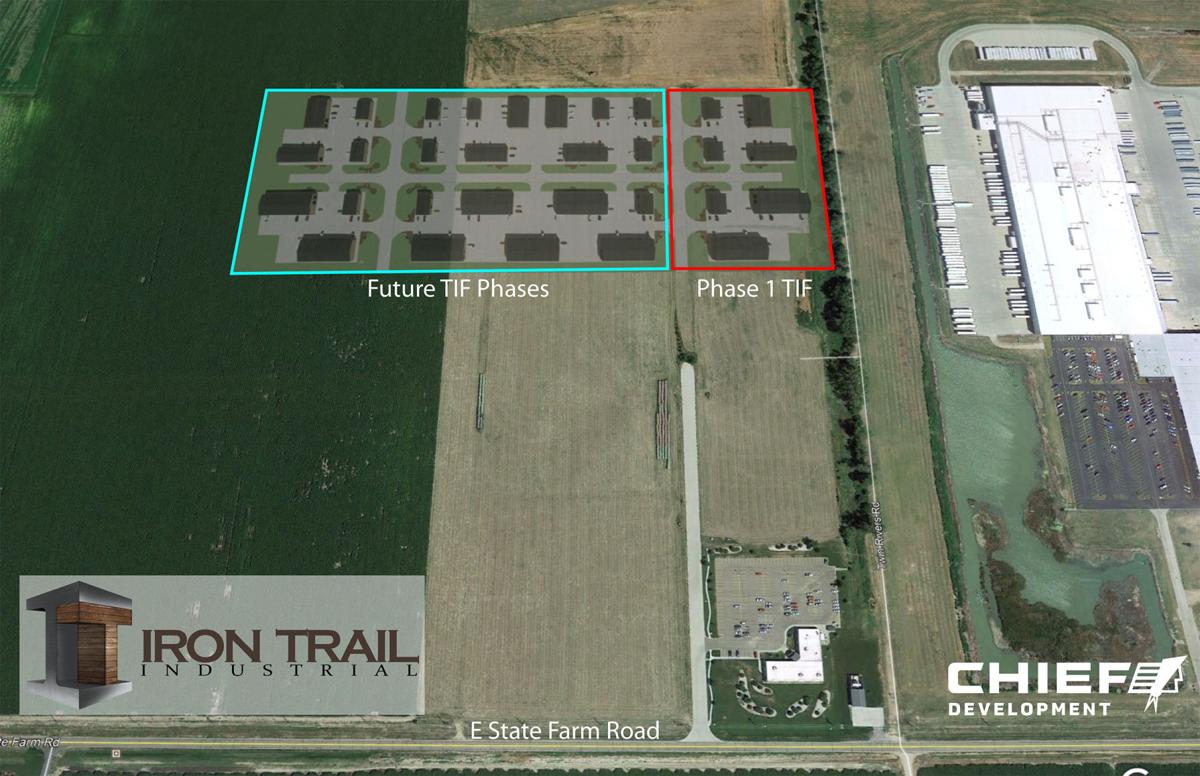 The development arm of Grand Island-based Chief Industries Inc. on Monday proposed a trio of projects that could invest up to $40 million along and near Interstate 80 between North Platte’s interchanges.

Its last and largest phase — a proposed $15 million to $20 million “senior living” complex of more than 200 units — envisions the continuance of Iron Eagle Golf Course, though not necessarily under city ownership, he said.

Iron Trail would start on 7 acres due north of the Cabela’s call center and eventually add 23 acres to the west, Bullington said. Likely structures would include warehouses, distribution centers and “build-to-suit” structures for subcontracting firms and other firms.

He said two local customers hope to start construction soon on the north side of East Halligan between the Iron Eagle Kubota tractor dealership and Tru by Hilton. Other businesses could follow, he said.

The senior living complex, including apartments and town homes, would rise starting in late 2020 or early 2021 on the “Hahler property” north of North Platte Community College’s North Campus.

A golf-cart and pedestrian trail would connect that development with Iron Eagle on its east and — by bridging the NPPD Canal — the recently annexed Keenan Management property and I-80/U.S. 83 businesses to its west.

Bullington said Chief Development would rely on North Platte and west central Nebraska subcontractors and workers alongside its own project leaders and crews.

“We’re going to be around” to ensure a high-quality result, he told council members. “We’ve got to protect a brand of 65 years. ... We’re in it for the long haul to protect the (Chief) name and the image.”

Chief Development, one of seven divisions springing from its parent’s roots in agribusiness construction, was a major partner in Lincoln’s West Haymarket district near Pinnacle Bank Arena.

Current projects include Fountain Point, a medical, commercial and housing campus in Norfolk, and Prairie Commons, another mixed-use project anchored by the Grand Island Regional Hospital at the U.S. 34-281 junction. Chief’s projects, even in Lincoln, have all needed TIF because it’s “almost the only tool Nebraska has to make these types of development happen,” Bullington said.

He outlined several legal steps for his firm’s project that Chief Development will begin presenting in coming weeks:

» Annexation of the Hahler site into the city limits. Sites for the first two stages already are within the city.

» A study to enable the project areas north of I-80 to be declared “blighted and substandard,” the necessary precursor for TIF eligibility.

NPCC’s North Campus, which lies between both areas, would be part of the study area. The Twin Rivers site already lies within a “blighted” zone.

» Requests for TIF assistance for all three projects, including redevelopment plans and “workforce housing” studies where needed.

Though the envisioned housing complex at the Hahler site would cater to people 55 and older, occupancy of many units wouldn’t be limited by age, Bullington said.

» Applications for assistance with the Halligan and Hahler projects from North Platte’s Quality Growth Fund, financed with a portion of dedicated proceeds from city sales taxes.

In addition to the council, the city’s QGF Advisory Board, Community Redevelopment Authority and Planning Commission would be involved in holding public hearings and making decisions or recommendations.

Council members asked pointed questions about the projects, with Councilman Ty Lucas homing in on how the often flood-troubled Iron Eagle figures into Chief Development’s plans.

The course would be a major selling point for residents choosing to live at the Hahler site, Bullington said. “Having a golf course adjacent to senior living and looking at (the course) from a three-story building — it’s a pretty good gig if you can get it.”

Chief Development, he added, already is talking with Nebraska Public Power District about bridging the canal so walkers, hikers, bicyclists and golf carts could move freely from the I-80/U.S. 83 businesses all the way to Iron Eagle.

“We think with the right plan and the right collaboration with NPPD and the city, you could do something special,” Bullington said.

He admitted that the debate about whether the city would divest itself of Iron Eagle or close it “causes a little bit of angst.”

His firm, he said, doesn’t have an opinion whether the golf course should be publicly or privately owned. But Bullington said it’s time for North Platte residents to decide which approach they prefer.

“If you aren’t going to keep investing in it, private ownership might be the right thing,” he said. But for it to remain an attractive asset, “it’s got to go to the right developer.”

After the meeting, Bullington told The Telegraph that his firm’s initial studies found little risk of flooding within the would-be housing site on the Hahler property.

If the course were flooded again, the city or a future private owner would have “to decide if they’re going to have a nine-hole (course) or do something to mitigate flooding there,” Bullington said.

He deemed community support “absolutely vital” in his remarks to the council. Chief Development was pursuing a $35 million mixed-use development in downtown Hastings before local opposition derailed it, he said.

“We feel as developers (that) there’s a need in outstate Nebraska for mixed-use” projects, he said. “I don’t know many developers anymore who want to fight with a community. They’ll move to the next community.

Watch Now: Biden wants to raise taxes on the wealthy

Watch Now: Biden wants to raise taxes on the wealthy

Watch Now: How much will space travel cost?

Watch Now: How much will space travel cost?