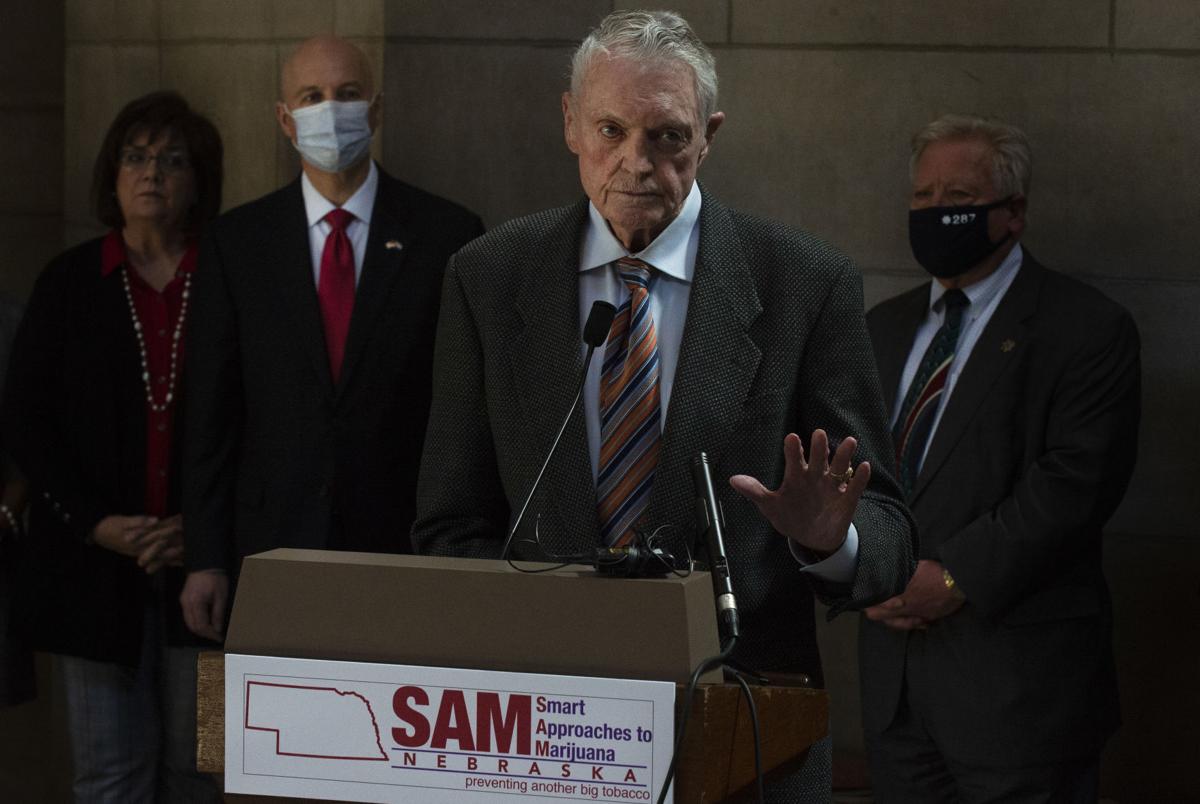 Tom Osborne (center), alongside Nebraska Gov. Pete Ricketts (left), delivers remarks regarding the dangers of medical marijuana during a new conference at the state Capitol on Wednesday. 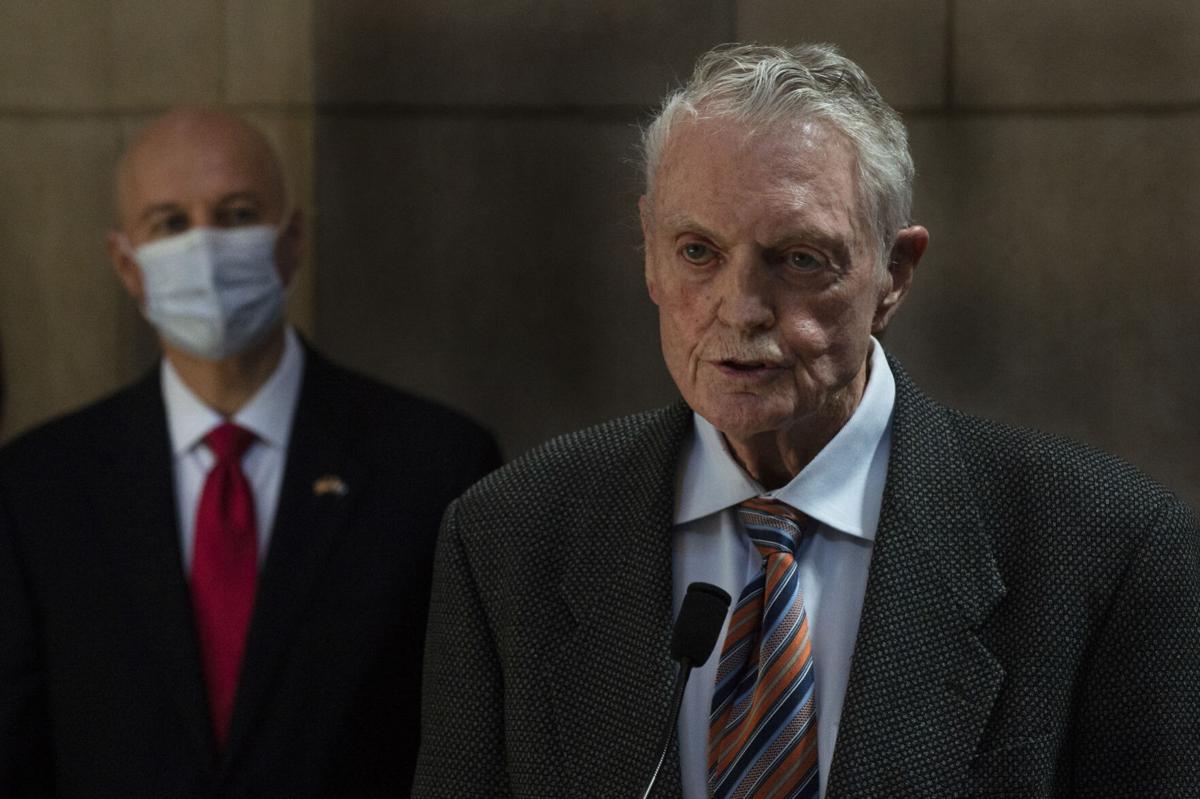 Tom Osborne (right), alongside Nebraska Gov. Pete Ricketts, talks about the dangers of medical marijuana during a news conference at the state Capitol on Wednesday.

Little has changed in the wording of a bill that would legalize medical marijuana in Nebraska since it was debated on the floor of the Legislature last year.

LB474, sponsored by Lincoln Sen. Anna Wishart, would allow for the cultivation, processing and use of medicinal cannabis, as well as create a regulatory and fee structure, oversight board and enforcement department.

"But a lot has changed in the hearts and minds of countless Nebraskans who are impacted by these words," Wishart told the Judiciary Committee on Wednesday.

After last year's bill was debated on the floor by the full Legislature but not advanced, Wishart helped spearhead a petition drive effort to put the question of legalizing medical marijuana before voters.

The effort netted more than 196,000 signatures and appeared headed for the November ballot before the Nebraska Supreme Court struck it down, ruling in favor with Lancaster County Sheriff Terry Wagner, who said the initiative violated the state's single subject rule.

Wishart told lawmakers that during the petition drive, she traveled to all corners of the state and learned the issue continues to enjoy broad support across age, geography and political party.

In Hamilton County, one signer told Wishart her father had suffered from post-traumatic stress disorder since returning from the Vietnam War that was only alleviated after he started taking cannabis.

"She told me it was the first time he had slept in years," Wishart said. "Those were the stories we heard every day when we collected signatures, and these are stories that are countless because they are lived experiences of people in our state who had benefited."

Those experiences were once again shared with senators.

Former Husker All-America football player Grant Wistrom, who now operates a cannabis company, told the committee medical cannabis "dramatically improved" the quality of his life after he started using it early in his NFL career, helping reduce his pain and to sleep better.

"Our children deserve medications that could provide them with relief of these debilitating seizures, but their zip code is preventing it," Hochstein told the committee. "There's a road block in front of them; the road block is this building and the people in it."

And Crista Eggers told the committee parents were forced to cross state lines in order to access medical cannabis to treat their children's serious medical conditions, like her son Colton, who suffers from seizures.

"Please don't make us criminals, we just want to save our children," Eggers said.

Opponents to Wishart's bill said the state's approach would do an end run around the regulatory process set up by the Federal Drug Administration, and argued there was no difference between medical and recreational marijuana.

Gov. Pete Ricketts, speaking at a news conference held by Smart Approaches to Marijuana before Wednesday's committee hearing, said marijuana use affected cognitive ability and changed the chemical makeup in the brain, particularly in youth.

He relayed several stories of young men who had ingested THC, the psychoactive compound in marijuana, before committing suicide.

"This is a dangerous drug that will impact our kids," Ricketts said. "If you legalize marijuana, you're going to kill your kids."

During the committee hearing, former state Sen. John Kuehn, who helped create the state's prescription drug monitoring program and now serves as a co-chair of Smart Approaches to Marijuana, said enacting LB474 would cause Nebraska to take "two steps back."

By giving doctors the ability to prescribe cannabis, Kuehn said the prescription drug monitoring program would be circumvented "in favor of a consumer-driven commercial industry" without regulation.

The committee did not take any action Wednesday, but looming over the hearing was a renewed petition drive filed with the Secretary of State's office last fall that would enshrine "the right to cannabis in all its forms for medical purposes" in the state constitution.

That language would be significantly looser than LB474, which Wishart described as "buttoned-up" compared to legislation in other states.

Sen. Tom Brandt of Plymouth said he would rather pass Wishart's bill than try to figure out how to regulate medical marijuana after a likely successful ballot initiative, and Lincoln Sen. Adam Morfeld, in a back and forth with Dr. John Massey, who was speaking in opposition on behalf of the Nebraska Medical Association, said doctors should come up with a list of what medical conditions they feel could be treated by cannabis before voters enacted a broader version of medical cannabis.

"This bill is not going to fail because of a lack of compromise," Wishart said. "If this bill fails to pass, it is because of political pressure from a few who wield their power to stamp out the will of the people.

"The people will not be silenced."

Are aliens not coming to Earth because of the cost?

Are aliens not coming to Earth because of the cost?

What is that mysterious 'blinking' object in space?

What is that mysterious 'blinking' object in space?

Rep. Adrian Smith has split from his fellow Nebraska House members in two high-profile, politically charged moments. But it’s not because he thinks President Biden didn’t win the presidency, or because he condones the Jan. 6 mob.

Nebraska has become ground zero for opposition to the 30-by-30 plan, with nearly two dozen counties adopting resolutions to block Biden's effort to conserve 30% of U.S. land and water by 2030.

Sen. Brewer says leukemia has returned; will step back from legislative duties

Sen. Tom Brewer said doctors saw the leukemia returning during blood tests for a series of surgeries he underwent earlier this year, and while he feels "tired and run down," he still plans to climb Mount Kilimanjaro later this year.

Mead's Board of Trustees stripped AltEn of its permit to manufacture ethanol, but will allow the company to continue working with seed company giants Bayer, Corteva and Syngenta to cleanup pesticide contamination at the site.

Dave Heineman resigned from Charles Herbster’s Conklin Company board, clearing the path for possible entry into the 2022 gubernatorial race

The Legislature adopted a set of guidelines that opponents say opens the door to gerrymandering.

'We will not back down': Families of disabled children rally at Nebraska Capitol

Nebraska families rallied to show their support for a filibustered bill that would have expanded services to as many as 850 children with disabilities severe enough to qualify them for institutions.

The governor said he believes the extra $300 weekly benefit acts as "a disincentive for some people to go back to work."

LB 322, sponsored by state Sen. Matt Williams of Gothenburg, was among several bills sponsored or prioritized by west central Nebraska lawmakers to be sent to Gov. Pete Ricketts.

Tom Osborne (center), alongside Nebraska Gov. Pete Ricketts (left), delivers remarks regarding the dangers of medical marijuana during a new conference at the state Capitol on Wednesday.

Tom Osborne (right), alongside Nebraska Gov. Pete Ricketts, talks about the dangers of medical marijuana during a news conference at the state Capitol on Wednesday.