This group was part of more than 150 people who assembled in front of City Hall during the council meeting to discuss a city-wide mask mandate. The protest was organized by the Pennington County Republican Party. Party Chairman Jeff Holbrook told the crowd he purchased 26 pizzas for them. 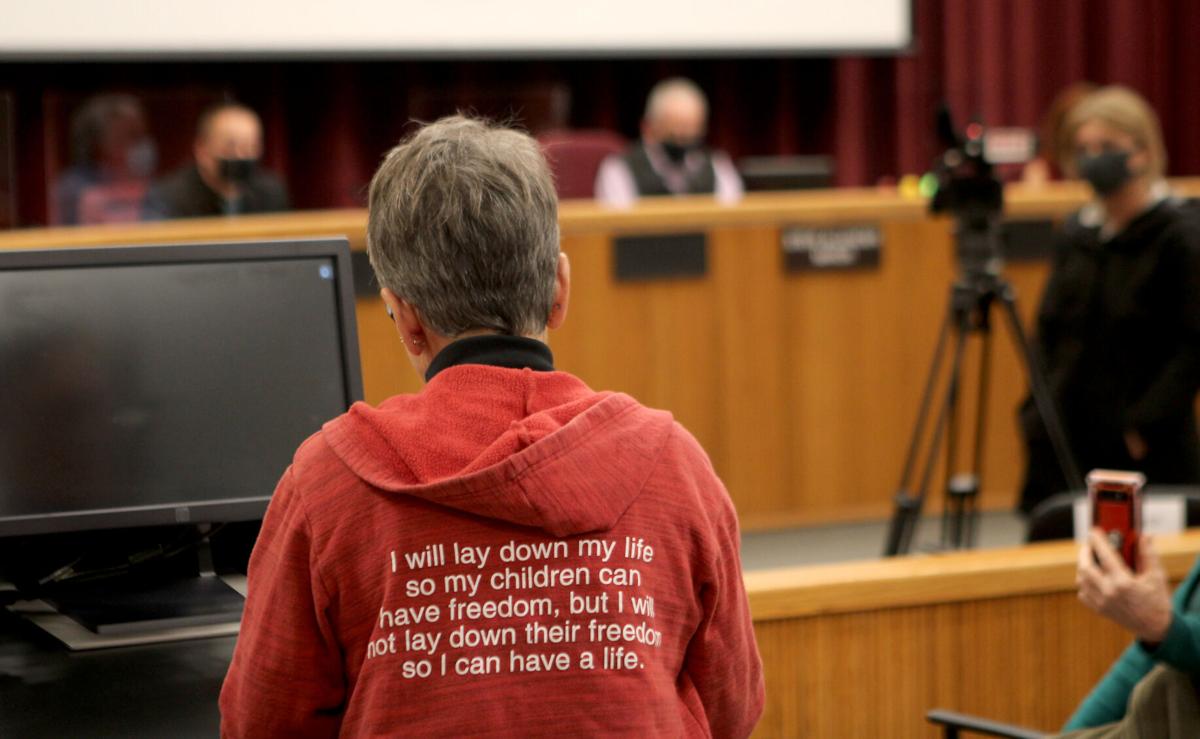 Tonchi Weaver was the first speaker at Thursday night's Rapid City Council special meeting to consider a citywide mask mandate. She questioned the council's authority to enact and enforce a mandate.

Carly Wescott told the council that the city had a case problem, not a pandemic problem. She said only 1% of those infected with the virus have died. 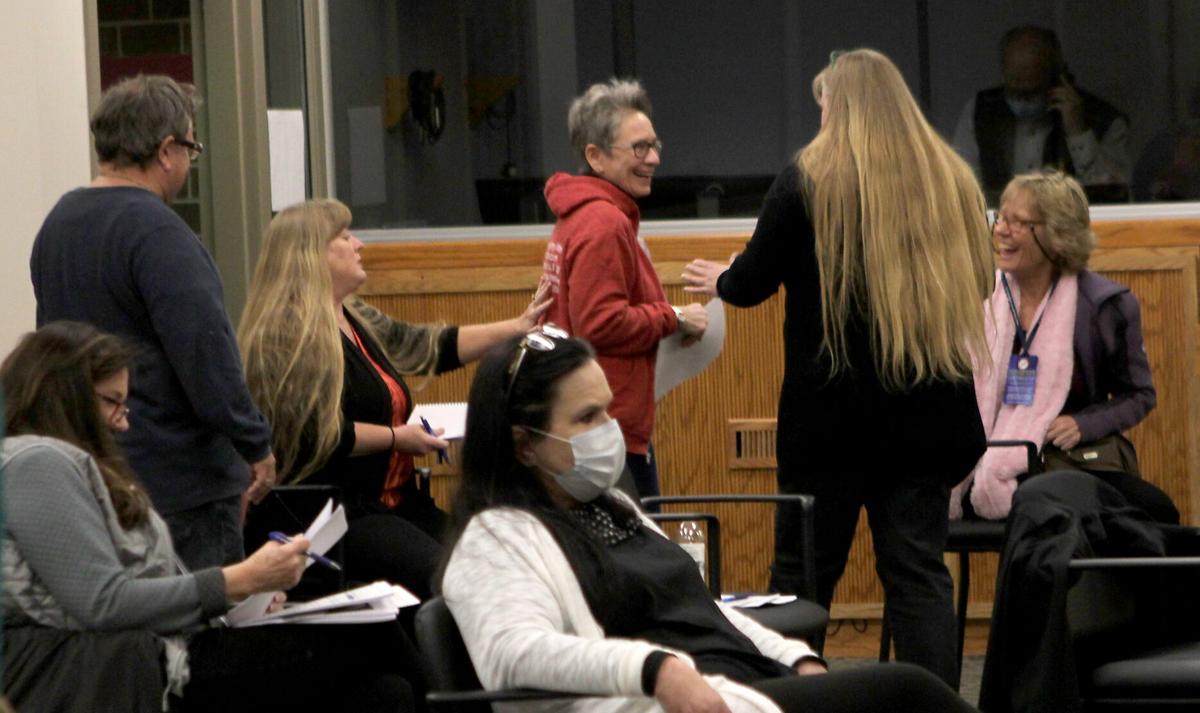 About 25 people were in the council chambers before Thursday's meeting. Less than half were wearing a mask despite the city's requirement in all city-owned buildings. 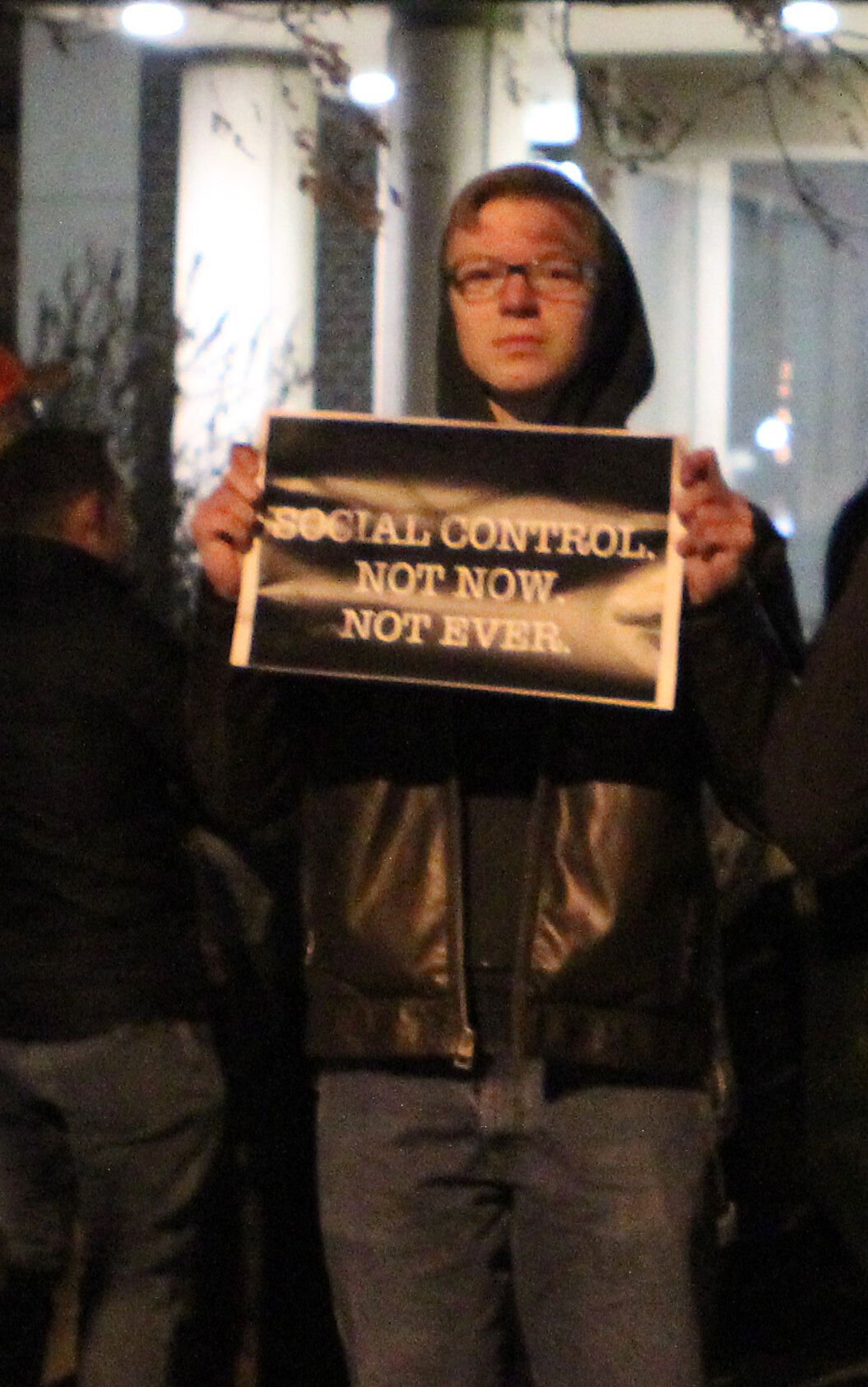 Rapid City Mayor Steve Allender cast the tie-breaking vote in the first reading for a mask mandate at a special city council meeting on Thursday night.

The council members who opposed the ordinance previously voted yes on a substitute resolution, which invited residents and visitors to wear a mask.

Allender said the council passed a resolution back in April that was similar, but COVID-19 rates in the area have climbed since then.

Tensions were high in council chambers with one member of the audience asked to leave after interrupting Evans, who said a resolution doesn’t give business owners the power to tell patrons who refuse to wear masks to leave their store.

Evans was also called to a point of order by Weifenbach when he quoted a hymn in response to protesters who invoked the name of the Lord earlier. Evans said he was offended by the invocation. Weifenbach said Evans was criticizing the people protesting.

Council members spoke after about two hours of public comment. Many residents said a mask mandate violates their liberties. Some said they would take legal action against the council if they approved a mandate.

Strommen said they are welcome to take their case to one of the many judges in Rapid City on the issue and have the right to do so.

A number of people who spoke said they recently moved to Rapid City or the state to get away from mandates in states like California and Colorado.

There were 599 public comments attached to the agenda item on the city’s website. Many said a mandate would encroach on their liberties and freedom.

Salamun said the virus is serious and people should take it seriously, but he couldn’t support the ordinance.

“My position is that we should educate over mandate, respect over restrictions and love over lockdowns,” he said.

Jones said he’s been “all over the place” with the ordinance, but has always been a believer in “cooperation over compliance.”

He said something needs to be done, but the mandate wasn’t it.

Roberts said it’s difficult to give up freedoms people are used to having and hard to comply when they don’t want to.

“This virus, unfortunately it’s affecting everybody,” he said. “I’m not immune to it, I’ve been affected personally within my family.”

Roberts said he believes he and his wife had it, although they didn’t get tested. He also said he has a family member who’s currently on a respirator.

“They’ve given him a 50/50 chance of living,” he said. “I do know this relative would take freedom and liberty over what’s happening in our country right now. People need to be responsible for themselves. People need to be helping one another. It’s sad to see how people are turning on each other.”

Weifenbach said the council wouldn’t be asking people to wear a mask, they would be telling them. He said he’s in the community 24/7 and interacts with “almost every level of person in the community.” He said he hasn’t seen an issue with people not wearing masks.

The council members who spoke for the ordinance said it was time to put something in place.

“It’s not asking for you to give up your freedoms, it’s not asking for you to do some great thing, great sacrifice to wear a mask,” Strommen said. “This mandate is so narrow, but it will help to suppress the disease and it will help us to get back to some sense of normalcy. At least until we get a vaccine, we have to take some more drastic measures because the times are drastic.”

Nordstrom asked Mayor Allender if he could send the ordinance to Gov. Kristi Noem.

Armstrong said she doesn’t want a mask mandate, but she does want people to be able to get back together and get back to normal.

“We’ve been told ‘we’re all adults and we want to make our own choices,’ so let’s discuss some of the choices that have been made,” she said.

She cited the July 4th celebration when President Donald Trump came to Mount Rushmore and very few masks were worn, as well as the 80th Sturgis Motorcycle Rally that resulted in cases throughout the country.

Before the meeting, Armstrong said she wished the community would do the right thing, not just for themselves but for everyone else.

“Rapid City is better than this, I know it is, that’s why I moved here, the sense of community,” she said before the meeting. “I don’t know where it’s gone, it’s just really sad.”

Drew, who was at the meeting over the phone because her husband had a test for the virus and thought it unwise to attend the meeting in person, said the time is right to have the mandate.

She said people who wear masks and want the mandate weren’t at the meeting because it’s too much of a risk.

She said if the masks don’t work, the ordinance would be discontinued.

“We know when to stop,” Drew said. “If it’s working, we probably keep up with it. If it’s not working, it’s done. It’s a mask, we’re not asking you to walk around on stilts or anything super difficult. We’re saying to put on a mask.”

Allender said health care workers have one request and it’s to urge people to wear masks.

“I don’t see being able to bend this curve back by suddenly starting to tell people things they’re not willing to believe,” he said.

There will be a second reading of the ordinance before it can go into effect. A date has not been set for that meeting..

"When Trump campaign lawyers have stood before courts under oath, they have repeatedly refused to actually allege grand fraud," Sasse said, "because there are legal consequences for lying to judges."

The Nebraska State Patrol is remembering Lt. Ken Dahlke, who died this week. Dahlke was featured in a 1993 episode of the TV show "Top Cops," dramatizing the 1989 pursuit in Holdrege involving prison escapees from Colorado.

"With the data that we have analyzed so far, we know what disparities exist and to what degree, but don’t yet have those answers of why," a researcher said.

Gov. Pete Ricketts will talk about new measures to combat the coronavirus pandemic at a news briefing Monday morning.

This group was part of more than 150 people who assembled in front of City Hall during the council meeting to discuss a city-wide mask mandate. The protest was organized by the Pennington County Republican Party. Party Chairman Jeff Holbrook told the crowd he purchased 26 pizzas for them.

Tonchi Weaver was the first speaker at Thursday night's Rapid City Council special meeting to consider a citywide mask mandate. She questioned the council's authority to enact and enforce a mandate.

Carly Wescott told the council that the city had a case problem, not a pandemic problem. She said only 1% of those infected with the virus have died.

About 25 people were in the council chambers before Thursday's meeting. Less than half were wearing a mask despite the city's requirement in all city-owned buildings.