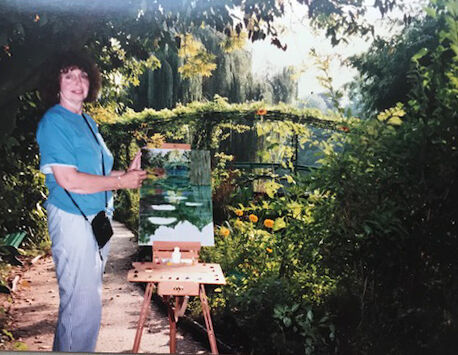 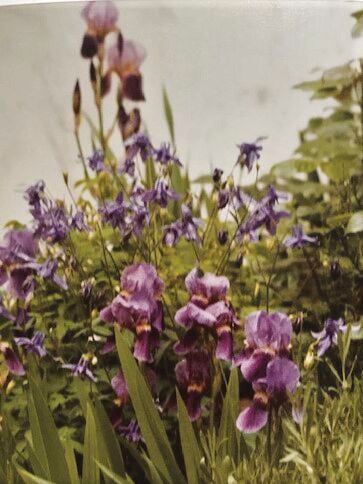 Claude Monet was an avid gardener who once reflected that perhaps flowers were the reason he became a painter.

Visiting the gardens that he owned — and painted — in Giverny, France, from 1883 to 1926, is surely on the bucket list of this gardener’s life.

An artist and friend of mine, Mary Beth Dodson is a North Platte native who now resides in Coronado, California. Dodson has spent time in his gardens on a couple of occasions.

“One thing that struck me about Monet’s Gardens was that the flowers seemed to be the ones I was familiar with in North Platte! He had many rose trees, iris, poppies and zinnias. Since I was there in the fall, nasturtiums covered the Grand Allee, the pathway leading from his front door to the green gate a half block ahead,” Dodson said.

“Monet’s gardens are in two parts. There is the one behind his pink stucco house, with Grand Allee, rose trees, zinnias, poppies and hollyhocks ... Then at the back of it, you can go down steps and through a short tunnel to come into the water lily gardens. That is where the famous bridges are, a huge weeping Willow tree and zinnias and peonies around the edge. It was randomly planned, but delightful. People were quiet as they walked through the gardens, almost a spiritual experience.”

The gardens are open daily from the beginning of April through the end of October. Giverny is about an hour and a half northwest of Paris by train or bus.

One probably thinks first of Monet’s series of water lily paintings on the pond that he created by diverting a local brook. But ten years before he created the water lily pond he had already planted a large garden in front of his two story Norman country home. Planting schemes of the day consisted of abundant borders encased in boxwood. Monet removed all the box edging from the borders of the existing garden, allowing the freed plants to stray onto the pathway. He chose the plants to his own taste, did not follow fashion and hated plants that he saw as “unnatural,” such as variegated foliage. He chose plants for color, texture, and harmony, but above all, plants that he wanted to paint. He used many pastels, but especially blues and purples, set off with white blooms.

Some of Monet’s favorite flowers, seen at Giverny are Japanese anemones, asters, nasturtiums, delphiniums, verbascum, lupines and peonies. Among the herbaceous blooms and foliage are Dutch iris. Monet was passionate about mixing different types of plants, from the simplest wildflower to the rarest variety, as long as he achieved the effect he wanted.

For a much shorter trip, you can recreate Monet’s garden in your own backyard. All of the aforementioned plants grow nicely in West Central Nebraska.

In addition to Dutch iris, which are evergreen and clump forming, Monet grew many colors and forms of bearded iris. By growing early and late cultivars, and having alkaline soil like we do in North Platte, you can produce a longer flowering period.

Some suggested flowers for your garden: delphiniums. They produce massive spikes of strikingly colored blooms. They all need fertile, well-drained soil. When watering, do so deeply. Earlier delphiniums had a rough time in a hot summer, but newer ones are more heat tolerant. Two such varieties are D. “Summer “orning’ (pink) and D. “Summer Cloud” (deep blue). Many delphiniums can reach a height of 36 inches and require staking, but there are some dwarfs, such as D. “Cherry Blossom” (rose red) that stand alone.

Asters flower in response to the shortening days of fall, so they can be daisy-like stars of your garden in August and September. They bloom in shades of blue, red, white, pink, purple and lavender. They are a rich source of nectar and are bee magnets, so care should be taken when harvesting cut flowers; do it in the evening, when bees are going to bed. Asters are available in garden centers in the fall, but they need enough time to get their root systems developed before the ground freezes if you expect them to come back in the spring. Therefore buy them as soon as they are available in early fall.

“Verbascum phoeniceum” hybrids, aka purple mullein, are relatively unknown but a good choice for your perennial garden, especially for hot, sunny sites and as a focal point in container gardens. Plants bear upright stems and spikes of flowers in a range of soft pastel colors, from white through pink, rose and purple. They are easy to care for, fast growing and they self seed. They are resistant to drought, deer and rabbits (which is an important fact for my yard).

“Lupinus polyphyllus,” aka lupins or lupines, are the tall spiky flowers that you turn to if you have a cool, moist garden. They bloom in the spring and can be four feet tall. Bloom colors are deep blue, purple, yellow, pink or white. The plants develop long taproots, so the soil should be loosened to a depth of 12 to 20 inches.

Peonies are one of the best-known and most dearly loved perennials. The flowers are gorgeous, dramatic fragrant and trouble-free. The most popular colors are white, pink and rose. If a peony plant is well situated and happy, it may bloom for 100 years with little or no attention. This means that it is worthwhile spending time choosing the right planting location and preparing the soil. Peonies prefer a sunny location with well-drained soil. Good air circulation around the plant will do much to prevent their only serious disease problem, the fungal infection, botrytis. You will probably want to provide your peonies with some support when the flowers are in bloom, especially double peonies, whose blossoms can become water-logged and very heavy. The best solution is a grid-type support, though ring supports also work. The essential thing is to put the supports in place early in the season, when the plants are only a few inches tall.

I challenge you to release the Monet impressionist “spirit” into your yard and be inspired.

For additional information on the Master Gardener program or to ask gardening questions, please contact the West Central Research and Extension Center at

Catch the latest in Opinion

Get opinion pieces, letters and editorials sent directly to your inbox weekly!

This week I will continue talking about the bills that either passed or failed in this legislative session. One that passed was LB 147. The go…

One hesitates to even think it — much less write it down in black and white — for fear of generating a jinx. But, North Platte, we are on a bi…

Happy Nebraskaland Days! If you can tear yourself away from all the activities, here is where you can go fishing this weekend. Temperatures ar…

This week, outdoor columnist Rick Windham writes about an afternoon he spent teaching Girl Scouts how to cook over an open fire with Dutch ovens.

This is Nebraskaland Days week. The flags are up, the tourists are arriving, the motels are filling and the celebrations is underway. The cowb…

Paloucek: Some needs are worthy of public funds

Summer brings all sorts of outside fun, but it also means knowing how to protect your skin from sunburns and harmful ultra violet sun rays so …

A one-size-fits-all approach that puts Washington in charge of Americans’ personal health and child care decisions is dangerous, especially in… 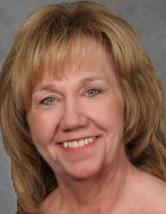