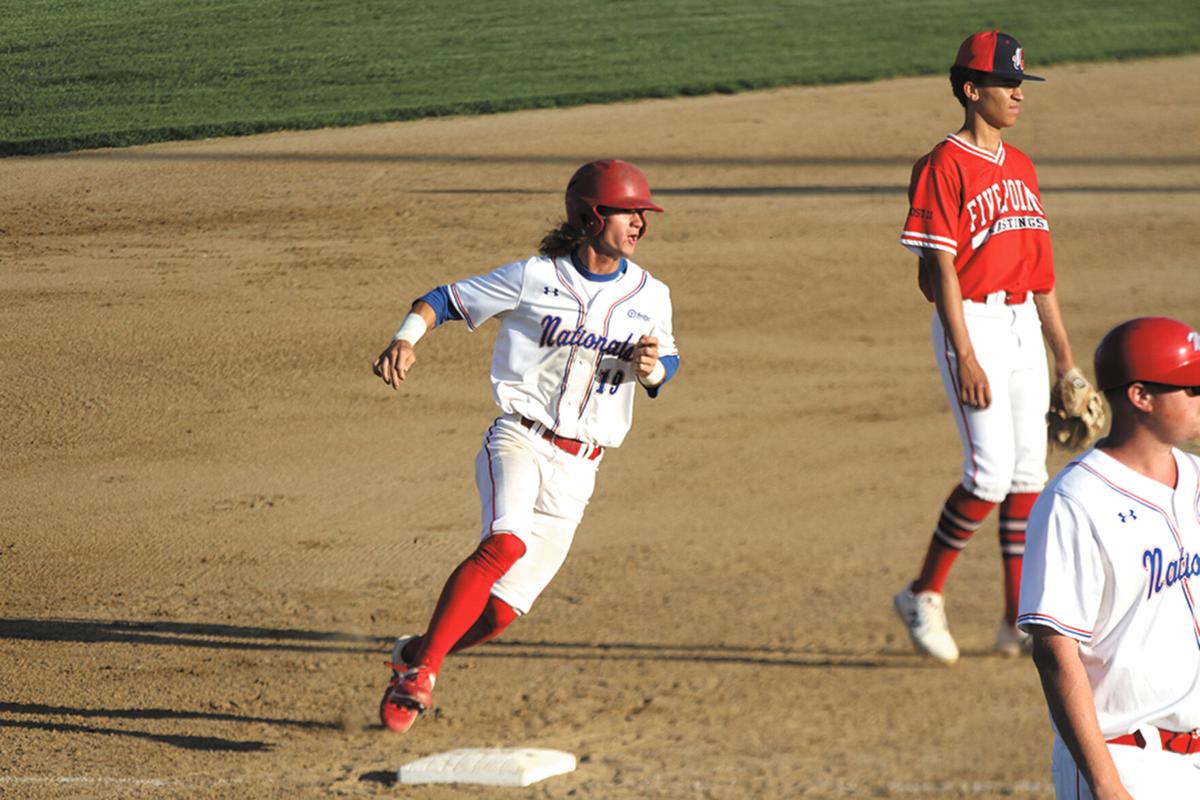 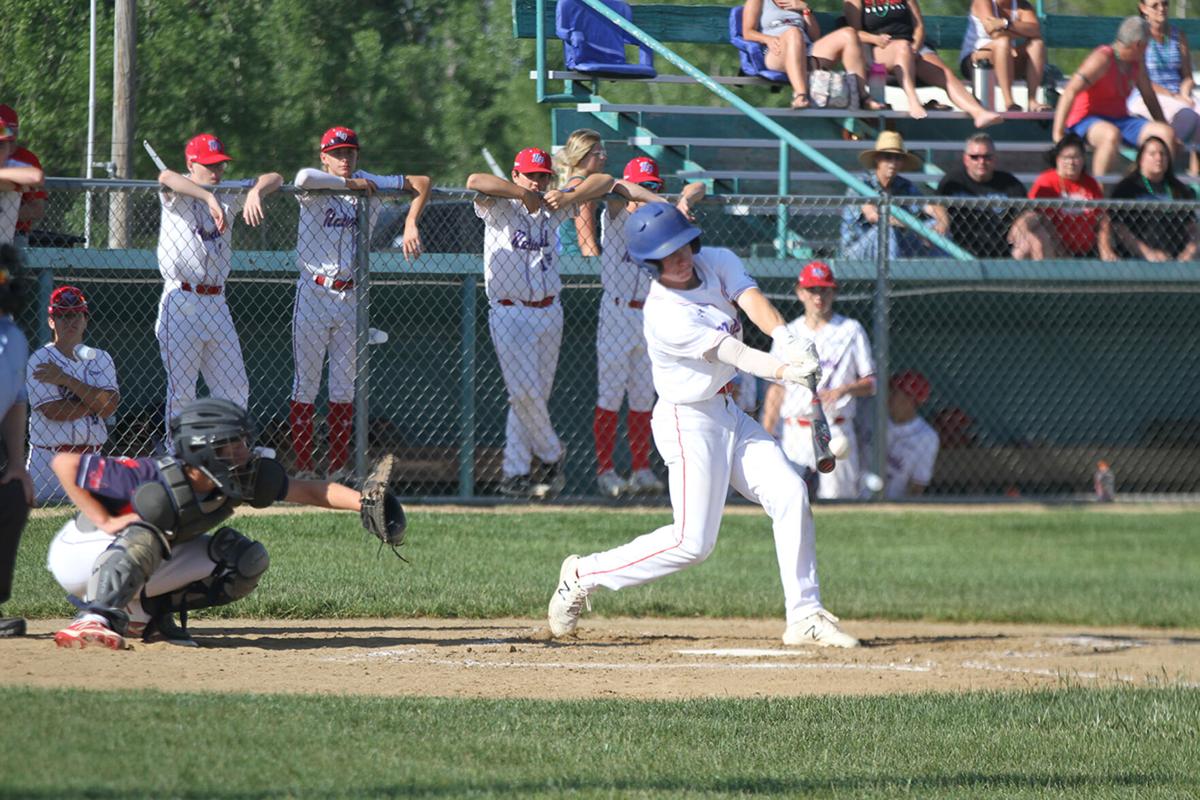 North Platte’s Tristen Beyer makes contact with the ball during the FNBO Nationals juniors’ 11-1 loss to Hastings on Tuesday at Bill Wood Field.

Will Coe held Hastings to two runs through five innings, and Carter Kelley got two hits and four RBIs as the FNBO Nationals seniors defeated Hastings 5-3 on Tuesday at Bill Wood Field.

Coe struck out three and gave up four hits. Mason Tilford relieved him in the sixth inning and didn’t give up a hit, but was pulled after starting the seventh with back-to-back walks. Derrick Kuhlman closed out the game with three strikeouts and a walk to secure North Platte’s win.

Kuhlmann got North Platte’s only other hit, and scored a pair of runs.

Hastings got on the board first when a sacrifice bunt scored a run. North Platte responded with three in the bottom of the inning when a wild pitch scored in a run, and Kelley hit a 2-RBI single. Kelley doubled in the bottom of the third to bring in Kuhlmann and Jeremiah Seamann, which pushed lead to 5-1.

The Hastings starter gave up just one unearned run in the first inning while walking two and striking out three on 57 pitches. He was relieved after recording the first out in the bottom of the fifth inning, and Tucker Adams closed out the game while allowing one hit.

“He had good velocity and was mixing his offspeed and he certainly was down and hit spots,” juniors coach Ryan Jones said. “That’s what effective pitchers do at this age and at this level, and our kids have to be able to hit that or it’s going to be a long year.”

Ty Robinson got the start for the Nationals, tossing four innings and letting up eight runs — six earned — on seven hits and three walks. Easton Geisler pitched the fifth inning and gave up three runs on two hits.

Robinson struggled in the first inning. Hastings had a stretch where five consecutive batters reached base on a single or a walk, and it took a 5-0 lead as a result.

The Nationals scored their only run of the day without getting a hit when back-to-back walks put two runners on, a fielder’s choice advanced Easton Jones to third, and an error brought him home.

Both pitchers eased into the game after that, getting through the next two innings unscathed.

“He was working behind a lot,” Jones said. “It’s hard to get hitters out when you’re 3-1, 2-0 in the counts. We didn’t help him out with a few fly balls I thought we could’ve caught, and if they caught those, maybe it’s a different inning.

“Our pitchers in general, they got to work on getting ahead in the count and they got to get better at holding base runners,” he added.

Parker Ginn collected North Platte’s only hit of the game with a double to left field with two outs in the bottom of the fifth.

“It came from a pinch hitter,” Jones said. “We put Parker in, and it’s hard to not get at-bats during the game, step up there when you’re kind of cold and then go get the first hit of the game. So I was very pleased with what Parker did there, and he had the right approach.”

The Nationals juniors head to Scottsbluff on Wednesday in a doubleheader starting at 5 p.m., then they head to the Gering Tournament starting Friday.

“We got to start winning baseball games,” Jones said. “We got an average record right now because we’re playing average. We got to play better baseball, we got to play with more intensity and more wins will come when we figure that out.”

Look to the Chargers and Seahawks to make the playoffs

Jaylan Ruffin threw five innings of two-run baseball and Cody Wright lined a two-RBI single to right in the seniors' 4-3 win. The juniors scored 15 runs in the first inning.

Bryce Butterfield and Carter Kelley combined for two hits each, and Butterfield knocked in two runs, but it wasn’t enough to overcome Scottsbluff in the first game of a doubleheader Wednesday.

The FNBO Nationals seniors picked up two victories on the first day of the Gering Tournament.

Pete Alonso took the red-hot topic around sticky substances in baseball to a brand-new level.

It’s a brand-new day for Negro League players, whose stats are now ranked with all MLB players

The late baseball legend Oscar Charleston is in good company.

The Nebraska Baseball Academy is heading to North Platte on June 17. The camp is designed for all baseball players and helps participants to learn proper techniques.

MLB's extra-inning rule is a hit with some, a whiff with others

May 1 was the 101st anniversary of a remarkable if obscure baseball game rediscovered every year.

The Trojans went 1-for-9 with runners in scoring position in a 9-1 loss to Imperial during a junior legion baseball game. Hershland stranded eight runners in the loss.

North Platte’s Tristen Beyer makes contact with the ball during the FNBO Nationals juniors’ 11-1 loss to Hastings on Tuesday at Bill Wood Field.