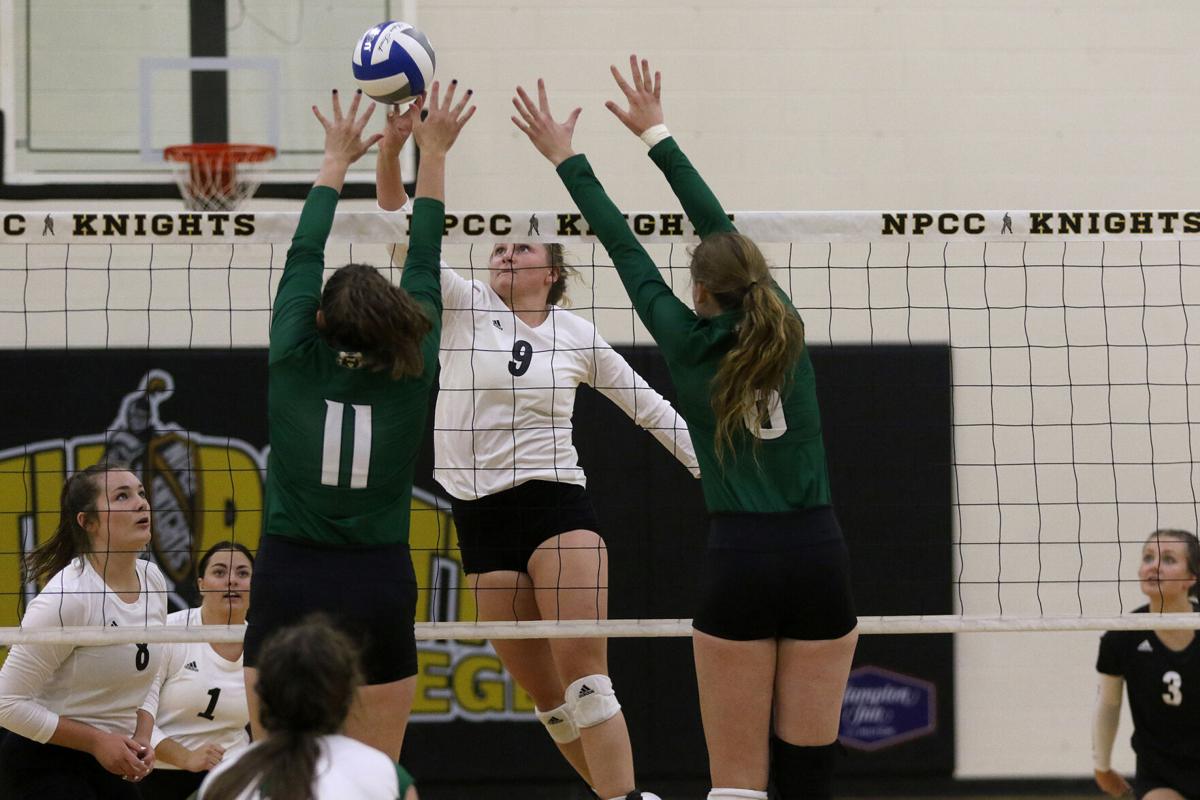 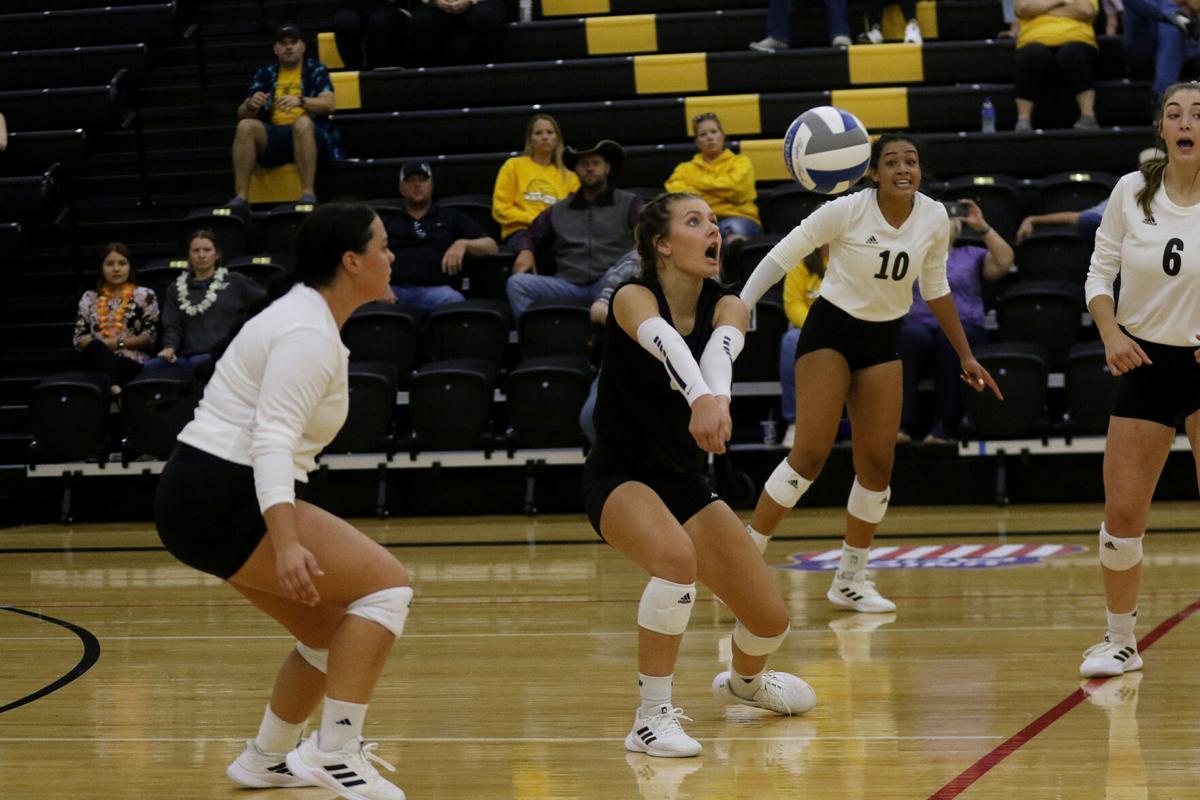 North Platte Community College’s Katy Bartell passes the ball to a teammate during the second set of the Knights matchup with Central Community College on Wednesday night at McDonald-Belton Gymnasium. 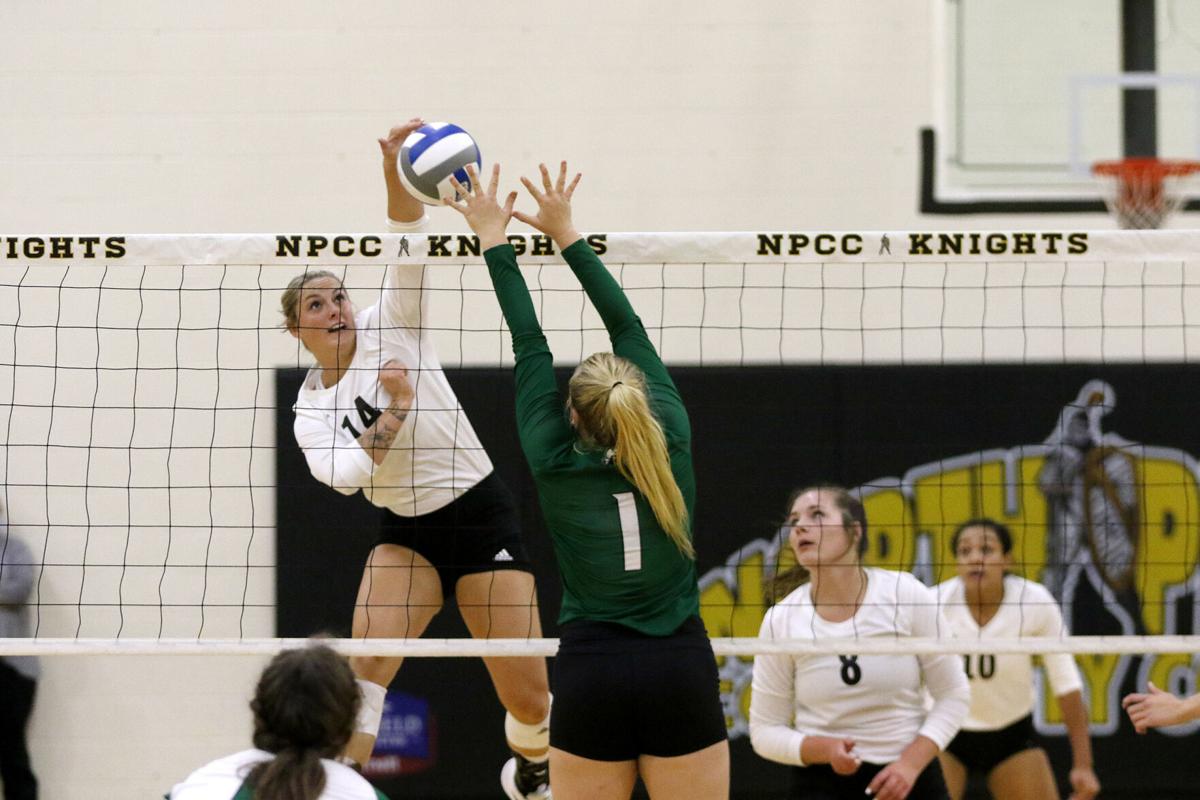 North Platte Community College had a full roster on the court on Wednesday night for the first time since the start of the season.

And they showed the potential they have when healthy.

Morgan Ramsey and Kim Krise both had 11 kills to lead a balanced effort as the Knights volleyball team swept Central Community College to open region play.

Allie Schneider had a team-high 34 assists and libero Katy Bartell had 14 digs.

“We went through a little bit (of a stretch) where kids were a little injured,” Knights coach Alexa McCall said. “I think we have some good breaks that are helping us kind of refresh our bodies and I think we’re going to have a good second half (of the season).”

North Platte was coming off a loss to McCook Community College last week in which they dropped the final three sets.

But North Platte remained in control through Wednesday’s matchup.

The Knights had nine aces as part of a solid serving performance as the Knights snapped a two-game skid and improved to 8-5 overall.

“I think we do a great job of serving,” McCall said. “I think that we get teams out of system and that in turn helps our defense. I also think we have a great serve receive pass. Those things allow us to be able to play a great offense and attack teams.”

The Knights did that in the third set as the team built a 21-9 lead but had to battle to put Central away.

The Raiders responded with six straight points before left-handed hitting sophomore Payton Hoatson was able to end the run with a kill.

Krise then put the Knights at match point before Central responded with three straight points.

Ramsey’s kill then ended the night.

“That’s something offensively that I think we do a nice job at. If we are in system, we are hard to stop,” McCall said. “We have quite a few options of kids that are able to put the ball away.

“Toward the end I thought we had (the Raiders) in a pretty good place but then we allowed them to come back a little more than I would like to see,” McCall said. “But I’m glad that we were able to close it out.”

Patrick Reusse: ‘Touchdown Jesus’ is from Minnesota? You betcha.

Ted Krebsbach was charged at that moment with supervising the grinding of spare granite into turkey grit for Cold Spring Granite Company.

CHARLOTTE, N.C. — There is a great deal of existential hand-wringing over the future of ACC basketball without Roy Williams and, soon, Mike Krzyzewski, and understandably so. Except for the ACC's least hand-wringingest coach. "I couldn't wait to get them out of the league," Notre Dame's Mike Brey said. "I've been waiting, man. Get out! Get out!" Brey's joking aside — and as a former Krzyzewski ...

North Platte Community College’s Katy Bartell passes the ball to a teammate during the second set of the Knights matchup with Central Community College on Wednesday night at McDonald-Belton Gymnasium.