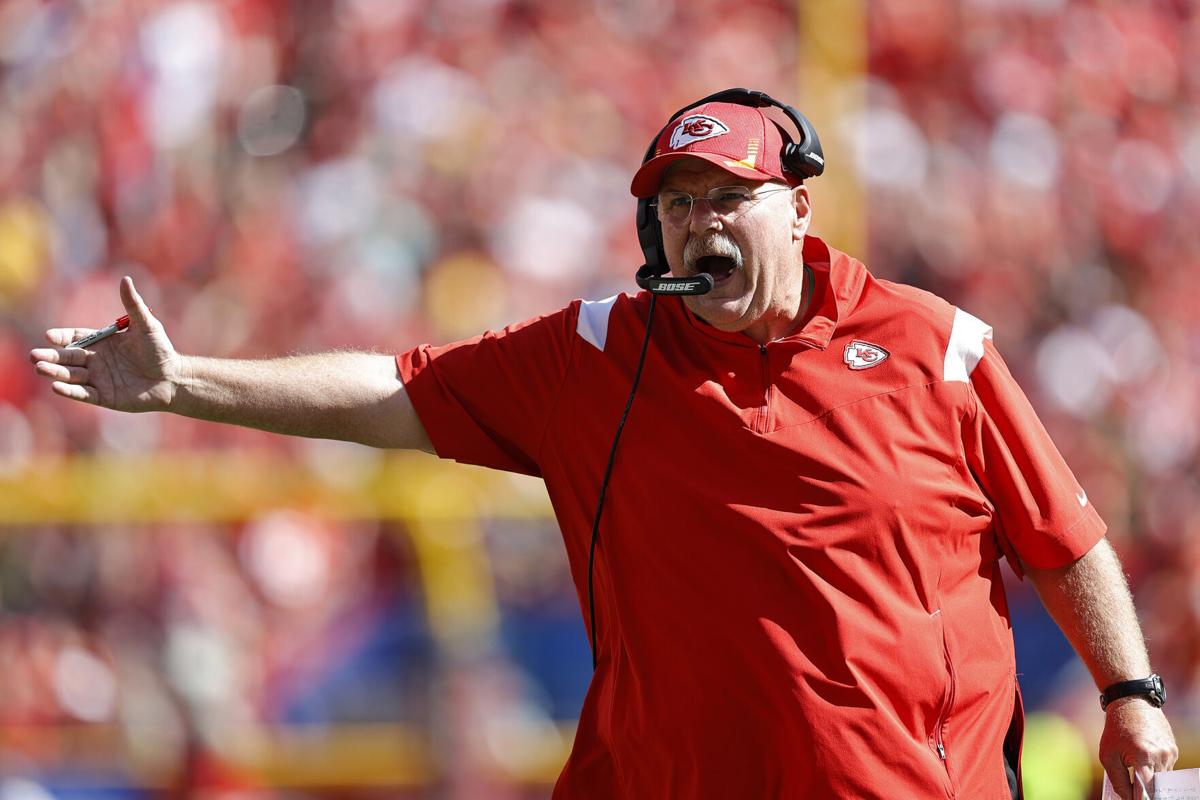 Head coach Andy Reid of the Kansas City Chiefs on the sidelines against the Los Angeles Chargers at Arrowhead Stadium on September 26, 2021 in Kansas City, Missouri. (David Eulitt/Getty Images/TNS) 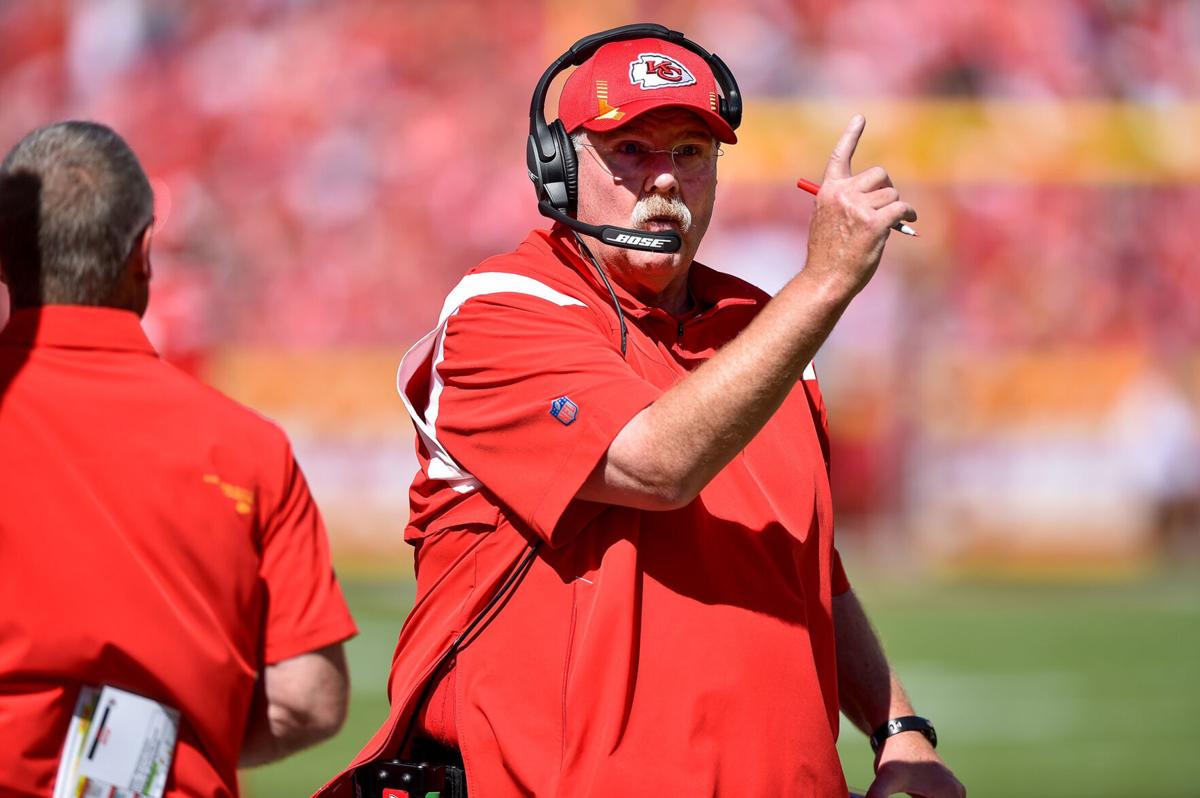 Chiefs coach Andy Reid was feeling ill, according to a team official, and therefore did not address the media after the team’s 30-24 loss to the Los Angeles Chargers on Sunday at Arrowhead Stadium.

Special teams Coach Dave Toub took questions from reporters in place of Reid, 63, who coached the entire game and addressed the team in the locker room afterward.

Meeting with reporters to discuss the outcome of a game is customary.

“He just wasn’t feeling well after the game,” Toub said. “He did talk to the team, and it was a good talk. Pretty much, ‘You have to quit the turnovers.’”

According to James Palmer of NFL Network, Reid left the stadium in an ambulance as a precautionary measure.

The Chiefs did not confirm the NFL Network report.

Asked about Reid, quarterback Patrick Mahomes said: “He came in and talked to us and he seemed fine, so that’s all I really know. ... He seemed find on the sideline, as well.”

Chiefs safety Tyrann Mathieu tweeted about Reid after the game, saying: “I’m praying for my Head Coach & I’m hoping you can send up prayers with me!! One of the best men & teachers I’ve been around!!! GOD please show us your mercy!”

The game was played on a sunny afternoon. The temperature at noon for kickoff was 81 degrees, and by late afternoon the temperature in Kansas City was 92.

The Chiefs were minus-four in turnover ratio Sunday, with two interceptions thrown by Mahomes and lost fumbles by Tyreek Hill and Clyde Edwards-Helaire. The Chiefs also didn’t create a takeaway in falling to 1-2 this season and last place in the AFC West.

Harris had 79 tackles — one behind Dylan Moses for the team lead — 4.5 sacks and an interception as a sophomore. Top needs: RB, Edge, LB

Jackson can play in space or rush the passer off the edge. In 2019, he was the first true freshman to start a season opener for the Trojans on the defensive line since Everson Griffen in 2007 (and just the second since Tim Ryan in 1986). Top needs: OL, Edge, S

Elam took a step back after an impressive freshman campaign in 2019. He'll be hard to pass on as a 6-foot-2 corner with elite ball skills if he can fine-tune his technique and become a more reliable tackler. Top needs: CB, LB, OL

The 6-foot-5, 315 pound Nelson has developed into one of the premier pass blockers in college football. Top needs: OL, Edge, S

Cross is a powerful blocker who can do damage at the second level in the run game with premium athleticism and his target-lock awareness. Top-10 is a possibility if he develops as a pass protector. Top needs: OT, Edge, TE

Jobe would have been a day two pick had he declared for the 2021 NFL Draft, but he decided to return to Tuscaloosa for a little bit more seasoning. Top needs: CB, S, WR

The Mission Hills product shunned millions of dollars to come back for his senior season in Columbus and will likely be a top-three prospect at the position in 2022. Top needs: WR, CB, OL

Mays has the talent and size (6-6, 325) to play all five positions on the offensive line. He's likely the most refined blocker in college football. Top needs: WR, LB, OL

Hutchinson suffered season-ending ankle surgery in 2020, but he was disruptive as a sophomore in 2019. He produced 4.5 sacks, 10 tackles for loss, six pass deflections and two forced fumbles. Top needs: Edge, OL, S

This projection is based on Thomas' special talent, but he has to stay healthy and develop consistency. Top needs: Edge, WR, DT

Walker would have heard his name called had he declared for the 2021 NFL Draft, but his current developmental trajectory puts him as one of the first offensive lineman off the board in 2022. Top needs: CB, TE, S

Metchie could be the fifth Alabama wide receiver selected in the first round in three years. He had 916 yards on 55 receptions and six touchdowns in an offense dominated by Heisman Trophy winner DeVonta Smith and Najee Harris. He'll be Bryce Young's clear-cut number one target in the fall. Top needs: OT, WR, CB

Davis would've likely been the first defensive tackle selected this year had he left school — Christian Barmore was selected by the Patriots in the second round with the 38th overall pick. Top needs: WR, DT, QB

Linderbaum was recruited as a defensive lineman, but switched to the offensive line during bowl prep of his freshman season and has never looked back. He heads into the fall as the top center in college football. Top needs: OT, DL, C

Every starting cornerback for the Buckeyes since 2013 have been drafted — seven in the first round. Banks has the physical traits and skillset to keep the party going. Top needs: CB, LB, WR

The pandemic limited Karlaftis to only three games last fall (he still had two sacks), but he was an AP Freshman All-American in 2019 after producing 7.5 sacks with 17 tackles for loss as a true freshman. Top needs: DL, WR, CB

Winfrey's quickness makes him a disruptive force on the interior. He'll be the anchor of a potentially dominant Sooners defense this season. Top needs: LB, WR, DL

The drip-drip of the hundreds of thousands of Washington Football Team emails into the public eye continued Tuesday night.

Head coach Andy Reid of the Kansas City Chiefs on the sidelines against the Los Angeles Chargers at Arrowhead Stadium on September 26, 2021 in Kansas City, Missouri. (David Eulitt/Getty Images/TNS)