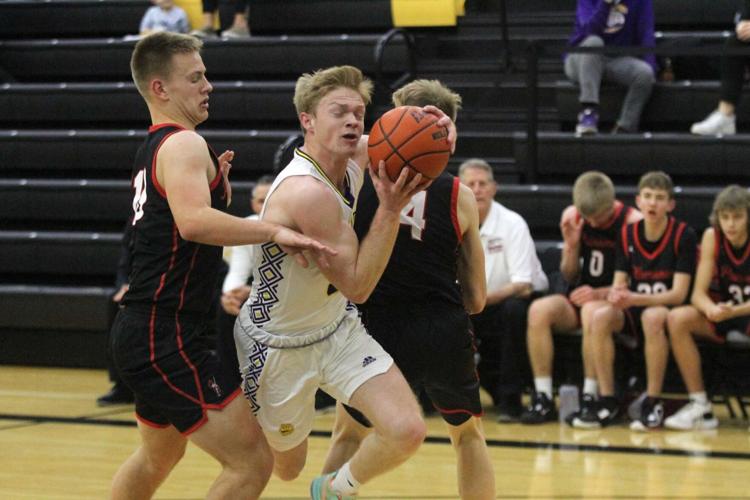 Bridgeport’s Kason Loomis drives between two Perkins County defenders during the Bulldogs’ win on Friday in the SPVA Tournament semifinals. 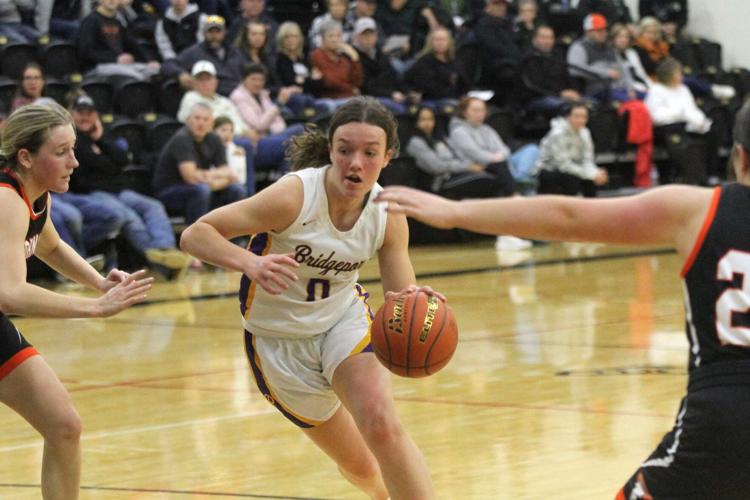 Bridgeport’s Olivia Loomis-Goltl drives to the basket during the Bulldogs’ win over Chase County on Friday in the SPVA Tournament semifinals.

Nik Weibert led the Bridgeport boys basketball team with 13 points as the Bulldogs defeated Perkins County 51-50 on Friday in the semifinals of the SPVA Tournament at North Platte Community College.

“I thought our team rebounded the basketball extremely well in the first half of the game, and then the second half was a gritty, gutsy game,” Bridgeport coach Sean Sterkel said.

Perkins County had two chances to make free throws to either tie the game or take the lead late, but the Plainsmen came up short both times.

Nolan Foster missed both of his attempts with 8.3 seconds left in a 50-49 game. If he made them both, Perkins County would have taken the lead.

Then with just over a second left, Ryder Potts needed to make both of his attempts to tie the game at 51-51, and he made just the front end.

“My first reaction was, ‘Did we rebound it?’” Sterkel said. “Some of those come off and that’s an easy scoop and score for them. I was just happy that we secured the ball at the end of the game when we needed to secure it.”

Kolby Lussetto and Bodhi Dohse each finished with 12 points for Bridgeport, and Kason Loomis added six.

Bridgeport advances to the SPVA Tournament finals, where the Bulldogs will face St. Pat’s at 6 p.m. Saturday.

Bridgeport never trailed, but Perkins County kept the game close outside of a slow first quarter.

The Bulldogs opened the game with a 9-0 run and held Perkins County to just four points as Bridgeport took a 13-4 lead into the second quarter.

Perkins County started whittling down the lead, pulling to within four before Bridgeport scored the next five points to go into halftime with a 25-16 lead.

The name of the game soon became could Perkins County pull off the comeback. The Plainsmen kept whittling down the lead from nine to then five midway through the third quarter. By the end of the frame, the Plainsmen were only down 36-34.

Bridgeport opened the fourth quarter with a 3 followed by a basket to go back out by seven. Wykert made a 3 to cut the deficit to four, and after Bridgeport made a basket, he drained another 3 to pull Perkins County to within three at 43-40.

Later on, Perkins County scored back-to-back baskets to cut the deficit to one at 47-46. Both teams traded 3s to keep the lead at one until Perkins County missed free throws with the game on the line.

“Our guards have matured a lot as the season has gone on,” Sterkel said. “Now we have 13 games under our belts … so I’m interested to watch their matchup when St. Pat’s has their pressure early and see how we handle it.”

Olivia Loomis-Goltl scored a game-high 27 points as the Bridgeport girls defeated Chase County 66-23 on Friday in the semifinals of the SPVA Tournament at NPCC.

Chase County kept the game close early in the first quarter, only trailing by three midway through at 9-6. Bridgeport then went on an 8-0 run to extend the lead to 17-6 going into the second quarter.

The Bulldogs exploded in the frame, scoring 23 points to put up 40 at halftime while holding Chase County to seven to extend the lead to 40-13.

Bridgeport scored 17 in the third quarter to put the score at 57-19, then made the opening basket of the fourth quarter to force a running clock. The Bulldogs later closed out the game 66-23.

Looking for a little championship drama at Saturday’s state dual tournament? Options may be limited, as three of four classes have heavy favorites.

From Bancroft-Rosalie to Yutan, see which colleges high school athletes have signed with since December.

Bridgeport’s Kason Loomis drives between two Perkins County defenders during the Bulldogs’ win on Friday in the SPVA Tournament semifinals.

Bridgeport’s Olivia Loomis-Goltl drives to the basket during the Bulldogs’ win over Chase County on Friday in the SPVA Tournament semifinals.