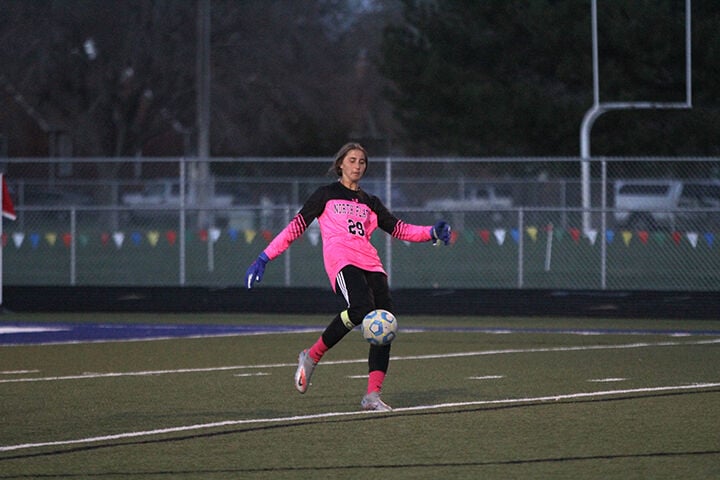 North Platte’s Abby Orr punts the ball after making a save during the Bulldogs 3-0 win over Lincoln Pius X in the A-4 District Final. 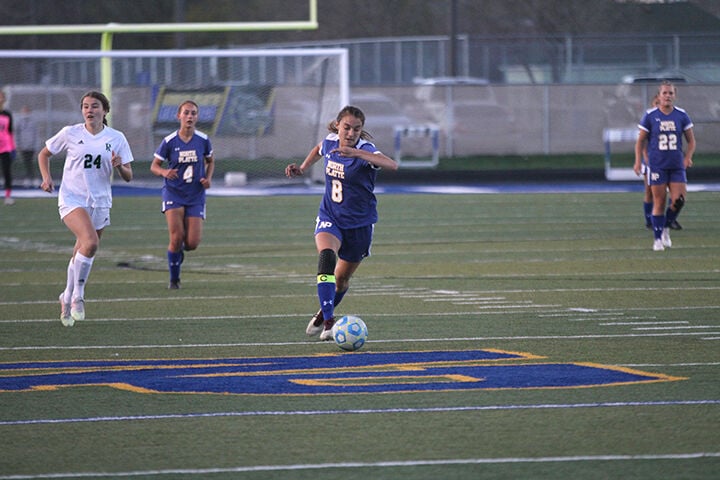 North Platte’s Gracie Haneborg dribbles the ball toward the goal during the Bulldogs’ 3-0 win over Lincoln Pius X in the A-4 District Final.

The one thing that sticks out when it comes to the North Platte girls soccer team’s roster is its youth, especially coming off a canceled season due to COVID-19.

The breakdown of that roster had the Bulldogs with nine freshmen, six sophomores and five juniors.

Then come the seniors: Gracie Haneborg and Abby Orr. It may just be those two, but the impact they’ve brought to the team both on and off the field hasn’t gone unnoticed by teammates and coach Sarah Kaminski.

“The reason our team keeps climbing and reaching for more is because our two leaders on the field are doing just that,” said Kaminski following North Platte’s 3-0 win over Lincoln Pius X in the Class A-4 District Final. “They have been tremendous leaders this season with an extremely young group of girls, and they’ve been amazing leaders. That’s a testament to where we are today.”

North Platte’s two seniors will get another opportunity at a state title when the Bulldogs play Omaha Marian in the Class A quarterfinals at 7 p.m. Wednesday. It’s a familiar place for Orr and Haneborg, as they’ve been to state every season.

Haneborg has been a driving force for North Platte since her freshman year. She recorded 44 points off 16 goals and 12 assists, then exploded for 71 points off 26 goals and 19 assists as a sophomore, which tied her for second in all-class points.

And this season, Haneborg shattered those marks yet again. She currently sits in second in points (81), tied for second in goals (33) and sixth in assists.

“I feel like I left my mark on the team,” Haneborg said after the district final win. “I am the grandma of the team, and it feels really good to be here right now and going to state knowing that we actually earned it.”

Orr leads one of Class A’s top defenses. North Platte has recorded a shutout in 13 of its 19 games, and the Bulldogs have only allowed 15 goals all season.

And it’s losses were close too. Against Lincoln East, Orr made 27 saves as the Bulldogs lost 3-1. She sits in fourth in Class A with 173 saves.

Orr credits her defense for how well the unit has played recently.

“Like Kaminski said, you want to get better than you were yesterday, and it definitely shows with our defense that we keep getting better every single day and it shows every single game,” she said.

Orr and Haneborg’s achievements this season earned them both United Soccer Coaches/Max Preps player of the week honors at various points in the season. Orr got it first on April 4 after posting a 4-0 week in which she didn’t allow a goal. Haneborg got hers for the week of April 19 to 25.

It goes to show how well a season the Bulldogs had between the leadership of their two seniors. With a young roster that hasn’t had the same experience Orr and Haneborg had trying to make a deep run at state, that leadership will be relied on more than ever.

“It’s been a path with these girls,” Kaminski said of the Bulldogs. “The thing is, they’ve all bought in. They’re all on board. They’re all willing to do whatever myself or their teammates ask of them. Their path is endless, and we’re still moving and grooving ahead.”

NBA plans to start the new season in October

Gavyn Brauer and Skyler Geier-Dodson both made their college commitments official and became the second and third members of the North Platte High School wrestling team to do so this year.

A number of area cowboys and cowgirls are heading to Hastings this week for the Nebraska High School Finals Rodeo Wednesday through Saturday.

“I gave everything I could to get as (big a lead) as I could and keep it,” said Wallace's Trey Robertson.

Hershland used an 11-run third inning to top Ogallala on Friday to open their season.

Chloe Daharsh pitched a one-run complete game as the North Platte Belles defeated the Broadway Bombers 3-1 in their second game of the Buffalo Bill Tournament on Saturday in North Platte.

North Platte’s Abby Orr punts the ball after making a save during the Bulldogs 3-0 win over Lincoln Pius X in the A-4 District Final.

North Platte’s Gracie Haneborg dribbles the ball toward the goal during the Bulldogs’ 3-0 win over Lincoln Pius X in the A-4 District Final.