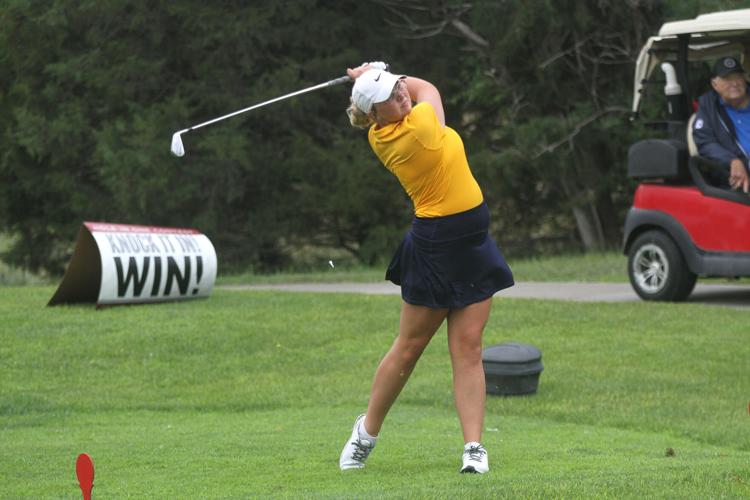 North Platte's Abbie Jones tees off on the ninth hole at Lake Maloney Golf Club on Tuesday during the first round of the Junior Ambassador Classic. 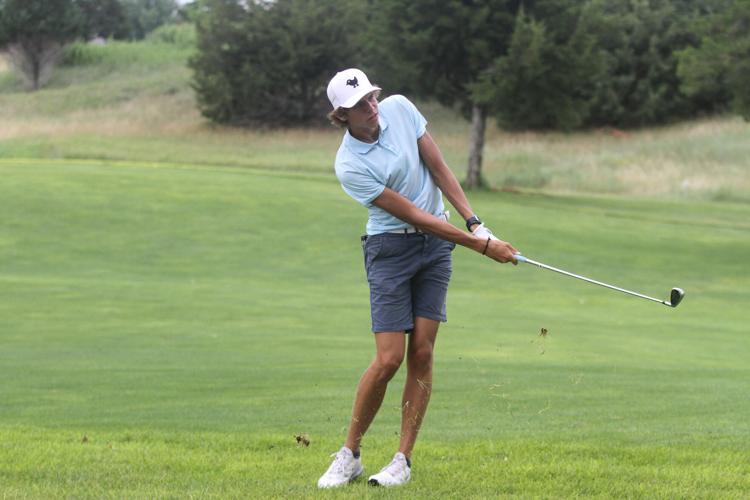 Schuyler Mustin swings on the 18th hole at Lake Maloney Golf Club on Tuesday during the first round of the Junior Ambassador Classic.

North Platte’s Abbie Jones wanted to play in the Junior Ambassador Classic to prepare for the upcoming high school season.

Seeing as how the tournament runs at both Lake Maloney and River’s Edge Golf Clubs, venues the Bulldogs practice at every day, the Junior Ambassador serves as a great way to get ready for the upcoming season.

“It gets me ready for high school ball, and it pushes me,” Jones said. “I get to play with some high schoolers, and I get to see them in season as well.”

Jones leads the girls 13-18 division by four strokes after shooting an 85 on the first day at Lake Maloney Golf Club despite feeling she could have done better on the back nine.

“It felt iffy, but it turned out alright,” Jones said. “I just wasn’t striking my clubs very well and had a hard time putting.”

Jones leads Hailey Mathews (89), Reese Ribera (96), Madison Preece (101) and Allie Jones (120) heading into Tuesday’s second round at River’s Edge Golf Club. Tee times will vary based on how each golfer finished in the first round.

Jones said playing at familiar golf clubs like Lake Maloney and River’s Edge gives her a bit of an edge over some of her competition.

“I mean, I know the course very well, so I know where to hit my balls and everything,” she said. “It gives me an advantage a little bit I think.”

Gia Baker leads the girls 7-12 division, which is only nine holes each day, with a 50. Izetta Schultz is in second at 55, Janee Wagner is in third at 59, Kemberlyn Kohle is in fourth at 65 and Olivia Wiezorek is in fifth at 78.

Caleb Castillo leads the boys 15-18 division after shooting a 78. Treyton York, John Beier, Reid Loop and Jesse Mauch are tied for second after shooting an 80, and Cole Kramer is in sixth with an 81.

Keaton Loop leads the boys 12-14 division with an 87. Asher O’Brien is in second with a 92, Tim Blakely and Adrian Gibbons are tied for third with a 94 and Ean Julius is in fifth with a 101.

Easton Knispel is first in the boys 10-11 division, which is only nine holes, after shooting a 39. Tucker Ehlers is behind him with a 40, Jude Swarm is in third with a 43, Lawson Cochran is in fourth with a 44 and Peyton Mustin is in fifth with a 48.

Cameron McCarthy leads the boys seven-nine division, also nine holes, after shooting a 45. Graysen Roelfs is in second with a 51, Ryder Scholdt is in third with a 54, and Ryan O’Neill and Collin Bode are tied for fourth with a 57.

Reid Loop defeated Cole Kramer in a one-hole playoff to win the title, while Abbie Jones defeated her competition by 15 strokes.

North Platte's Abbie Jones tees off on the ninth hole at Lake Maloney Golf Club on Tuesday during the first round of the Junior Ambassador Classic.

Schuyler Mustin swings on the 18th hole at Lake Maloney Golf Club on Tuesday during the first round of the Junior Ambassador Classic.