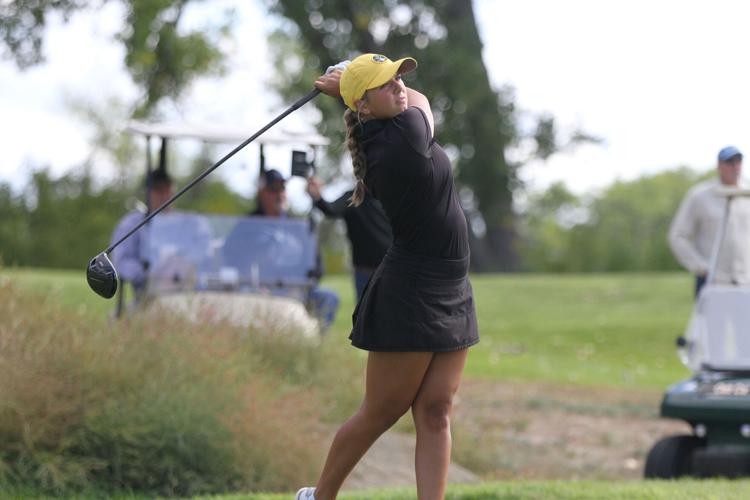 North Platte’s Karsen Morrison tees off on the 18th hole during the A-4 District at the Lake Maloney Golf Course on Tuesday in North Platte. 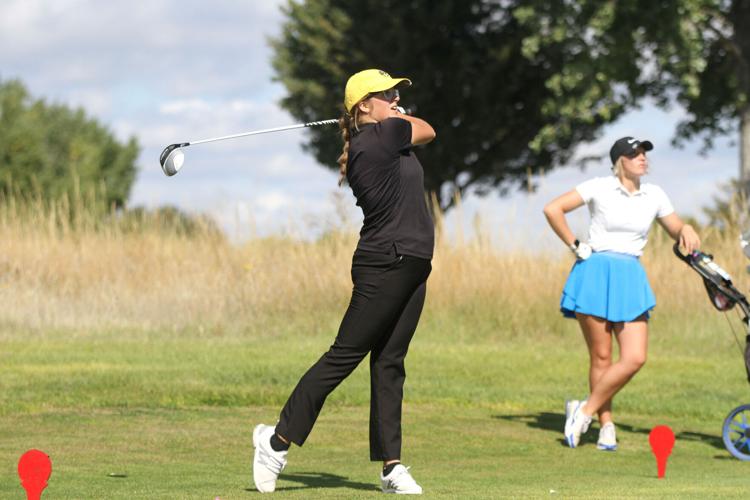 North Platte’s Kaylee Carlson watches her shot during the A-4 District at Lake Maloney Golf Course on Tuesday.

Karsen Morrison shot 72 to win, and Abbie Jones shot 83 for second place Tuesday as the North Platte girls golf team won the A-4 District at Lake Maloney Golf Course. The win qualified the team for the state meet.

“I felt like coming into this district tournament, we were in a good mindset,” North Platte coach Matt Kaminski said. “We prepared the right way. We felt comfortable on our course, and we knew there were going to be challenges with the course we were going to have to deal with as well as other teams. We responded.”

The Bulldogs placed four in the top 10 and fought off second-place Omaha Marian by 10 strokes to win the district. North Platte won with 345, followed by Marian in second with 355 and Kearney in third with 376. All three teams qualified for state.

Morrison shot 38 on the front nine, then shot four strokes lower on the back nine to finish with 72. Jones also went lower on the back, going from 43 on the first nine to a 40 for a total of 83.

The biggest improvement came from Hailey Mathews, who finished 10th overall. After shooting a team-low 53 on the front, Mathews responded with a 43 on the back. That 10 stroke improvement also helped North Platte hold off Marian for the district title.

“We didn’t get out to exactly a quick start. I thought most of the girls played better on the back, they hit the ball better,” Kaminski said. “It’s a team game. We have some seniors that I feel like have been the rocks for us all year as far as reliable and being consistent, and the other girls have been improving. We certainly didn’t feel like we hit on all cylinders, but we played some solid golf, and we’re happy with the result.”

Kaylee Carlson finished ninth with 94 after shooting 46 on the front and 48 on the back. Madison Preece shot 105 to round out North Platte’s scoring.

The Class A state tournament is Monday and Tuesday at the Norfolk Country Club. This will be the final state appearance for Morrison, who has reached state all four times and finished 6th or better in her first three appearances. Morrison will look to end her high school golf career with a win.

“She talks about being patient a lot, and that’s one area she’s grown in,” Kaminski said. “She was patient again today. She’s had these dates circled on her calendar for quite some time, and I know these are really, really important to her, and she wants to play well.”

North Platte wrestling defeats Gering in Clash in the Commons

North Platte won by fall in five matches, including the last three matches at 126 pounds, 132 and 138.

Nick Rubek has the wrestlers to watch during the 2022-23 Nebraska high school boys and girls wrestling seasons.

North Platte announced the hiring of Shelly Byrn as the Bulldogs' next volleyball coach in a press release Tuesday.

It can be a bit of a fool's errand to rank boys basketball teams so soon after the end of the football season, but the discussion makes it fun.

Here is the Journal Star's first stab at sorting out the state's top teams. Class A is loaded with city squads in what's shaping up to be a thrilling winter.

Tilford said the Nebraska offer is a preferred walk-on with the intention that he can earn a scholarship in a year.

People can't get over Jude Bellingham’s performance against Senegal

People can't get over Jude Bellingham’s performance against Senegal

North Platte’s Karsen Morrison tees off on the 18th hole during the A-4 District at the Lake Maloney Golf Course on Tuesday in North Platte.

North Platte’s Kaylee Carlson watches her shot during the A-4 District at Lake Maloney Golf Course on Tuesday.