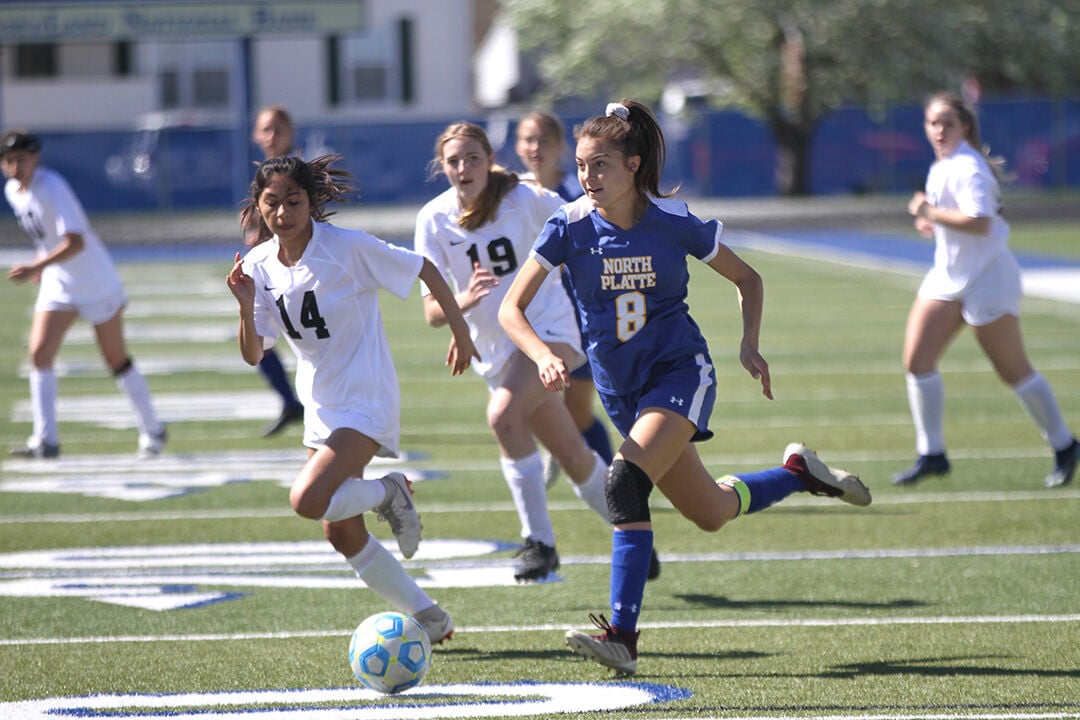 North Platte's Gracie Haneborg beats out a Fremont defender and dribbles toward the goal during the Bulldogs' 3-0 win over the Tigers on May 1 in the first round of the Class A-4 District. 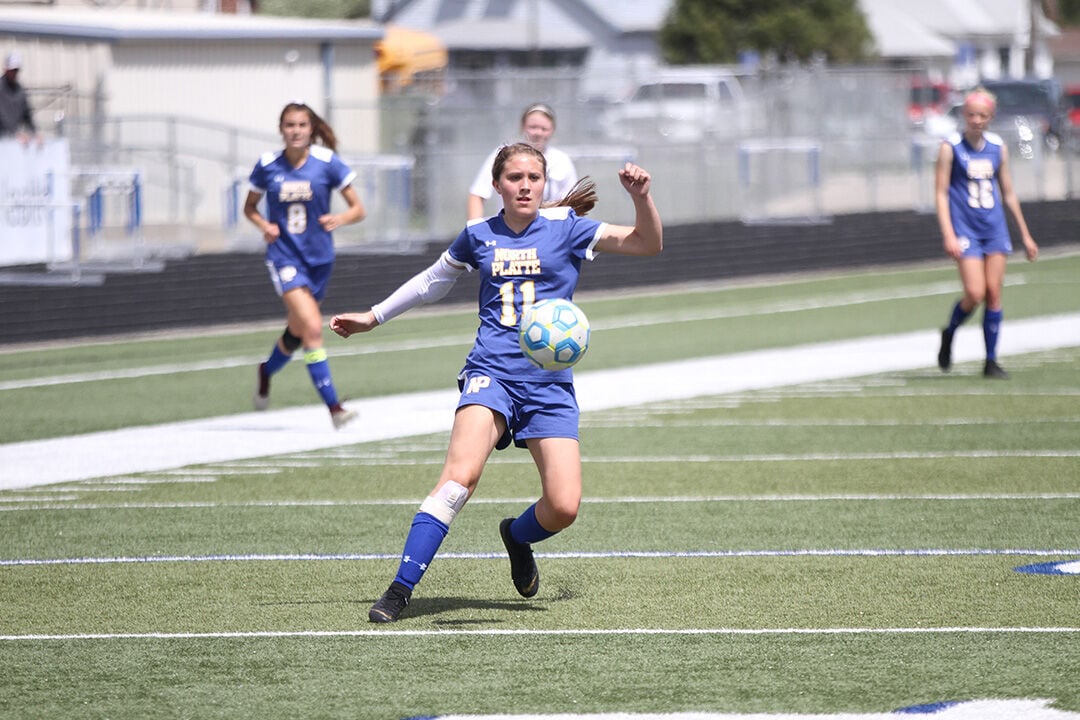 North Platte's Jaycee Hipwell tries to control a pass during the Bulldogs' 3-0 win over Fremont on Saturday in North Platte. 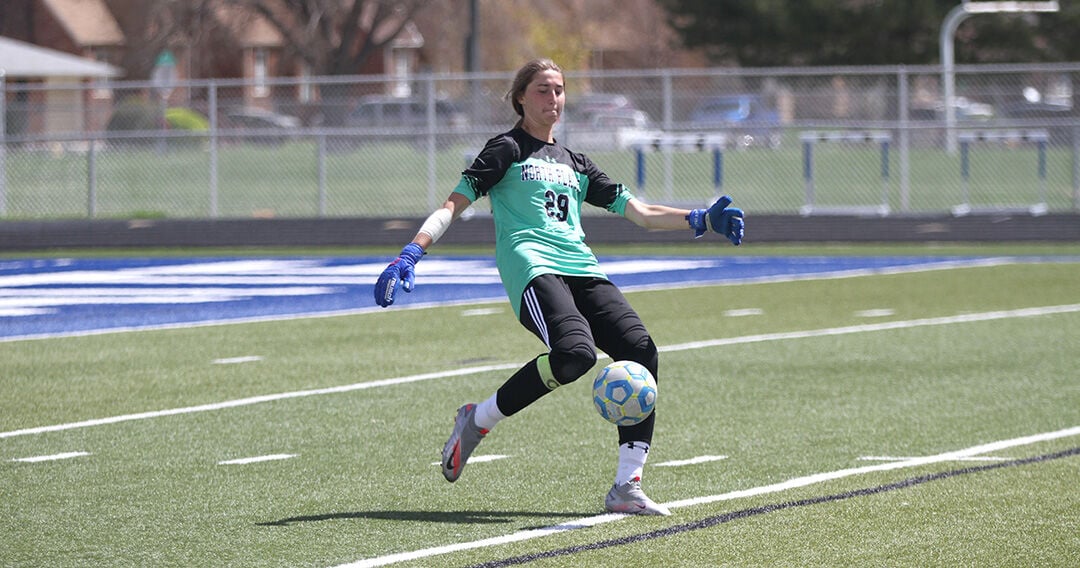 North Platte keeper Abby Orr punts the ball out to her team during the Bulldogs' 3-0 win over Fremont on Saturday in North Platte. 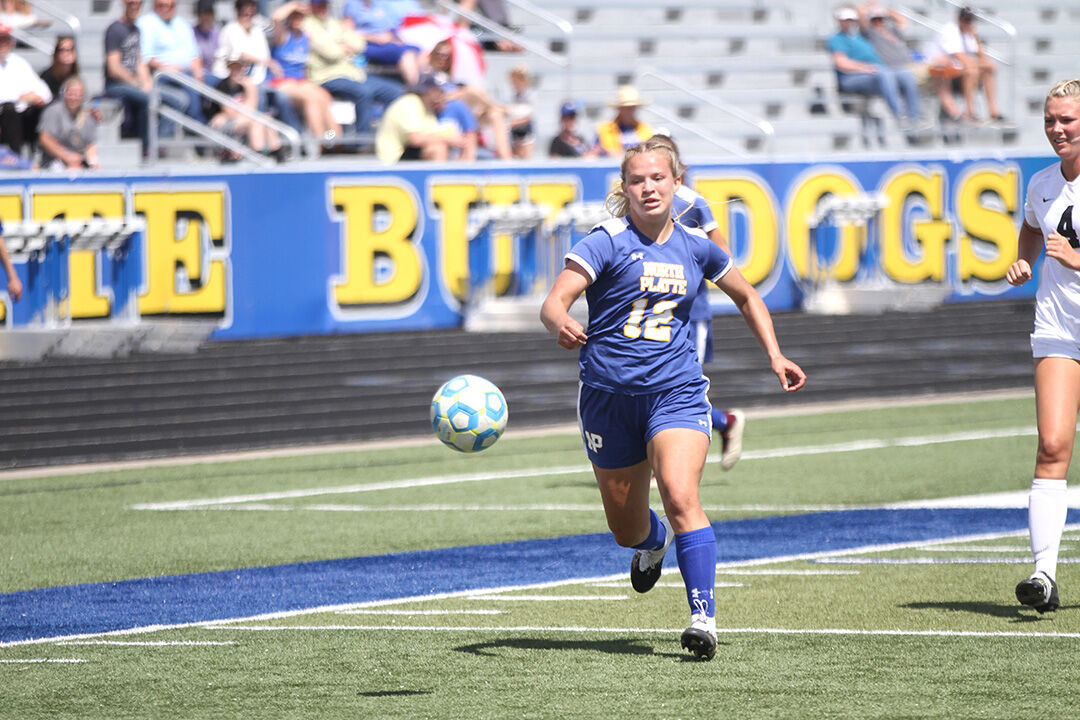 North Platte's Brooklyn Ayres chases after a ball during the Bulldogs' 3-0 win over Fremont on Saturday in North Platte.

The Bulldogs had just advanced to the Class A-4 District finals, but the girls had nonchalant expressions on their faces. So Kaminski chuckled a bit, reminded them that they are one game out from reaching state and told the team to celebrate the win.

That got the team beaming and laughing before one of the team captains, Gracie Haneborg, broke down a team huddle.

Haneborg scored twice and Kaitlyn Evans added a goal and an assist — all in the first half — as North Platte knocked off Fremont to start postseason play on a Saturday that felt more like July than April.

“I feel really confident going into our second game,” Haneborg said. “Today, we came out really strong against them. We already played them the first time, so we knew what to do. I feel like that second half was kind of slow, but I think we were kind of tired. It’s pretty hot out right now.”

The opportunities to score came early in the first half. The Bulldogs almost put one away nearly 30 seconds into the game on a cross right in front of the net that just missed out on a North Platte attacker.

“These guys, their expectations for themselves are very high, which is awesome,” Kaminski said. “I know they wish they would’ve capitalized on a few of those, but we’re where we need to be. We’re heading into the game we want to be heading into.”

The Bulldogs did capitalize at the 26:33 mark in the first half. Kaitlyn Evans laced a corner kick straight to Haneborg, who buried the shot into the corner for the 1-0 lead. Three minutes later, Haneborg struck again, this time scoring on a one-on-one with the Fremont keeper. Evans scored a few minutes before halftime to put the Bulldogs ahead 3-0.

“When we’re up 1-0, that’s nerve wracking,” Haneborg said. “Going into half with three goals makes you really feel confident because you can have one bad touch, or a couple bad touches or that one bad pass. Going into a half up over another team makes you more confident.”

North Platte completed the shutout in the second half thanks to a strong defensive effort. The Bulldogs’ defense applied pressure to Fremont all game and made keeper Abby Orr’s job in goal a lot easier.

“I’m so proud of them,” Orr said. “I know the news sometimes and the newspapers don’t really give our defense a lot of credit, but they actually are a big part of why we have so many shutouts and why why we have a lot of wins. They work their butts off.”

North Platte allowed 10 goals through its first five games this season, but it cut that down to just five over the course of the next 13. The Bulldogs also have 12 shutouts on the year, including six in their last seven games.

The defense will look to keep its dominant streak going Wednesday when North Platte takes on Lincoln Pius X, who defeated Lincoln North Star 3-0 on Saturday. The Bulldogs will host the game, but the start time as of now is still up in the air.

A win against the Thunderbolts will earn North Platte a trip to the state competition in Omaha.

“I just tell the girls all we can do is be the best us,” Kaminski said. “And hopefully getting to Omaha and doing what we do down there will turn some heads.”

It was a day full of records broken and overall success for the Bulldogs as North Platte hosted the GNAC meet Thursday.

Emerson was one of many winners at the Best in the Midwest Invite, a competition that was invite only and featured some of the best athletes from central Nebraska.

At the Dave Blevins Memorial Invite on Friday in Arnold, Clayton Moore was thrilled with his prelim time of 15.6, one of his best times so far this season. He was even more excited when he ran a 15.3 in the finals.

North Platte’s two seniors will get another opportunity at a state title when the Bulldogs play Omaha Marian in the Class A quarterfinals at 7 p.m. Wednesday.

North Platte will face No. 5-seed Omaha Marian in the first round of the state tournament on Wednesday at 7 p.m.

Abby Orr and the Bulldogs defense recorded another shutout and Gracie Haneborg scored two goals for the third consecutive game as North Platte defeated Lincoln Pius X 3-0 on Wednesday to clinch their spot at Class A state.

Olivia Heinert’s goal in the final minute of the first overtime was the difference in Omaha Marian’s win over North Platte in the opening round of the girls state soccer tournament.

North Platte's Gracie Haneborg beats out a Fremont defender and dribbles toward the goal during the Bulldogs' 3-0 win over the Tigers on May 1 in the first round of the Class A-4 District.

North Platte's Jaycee Hipwell tries to control a pass during the Bulldogs' 3-0 win over Fremont on Saturday in North Platte.

North Platte keeper Abby Orr punts the ball out to her team during the Bulldogs' 3-0 win over Fremont on Saturday in North Platte.

North Platte's Brooklyn Ayres chases after a ball during the Bulldogs' 3-0 win over Fremont on Saturday in North Platte.