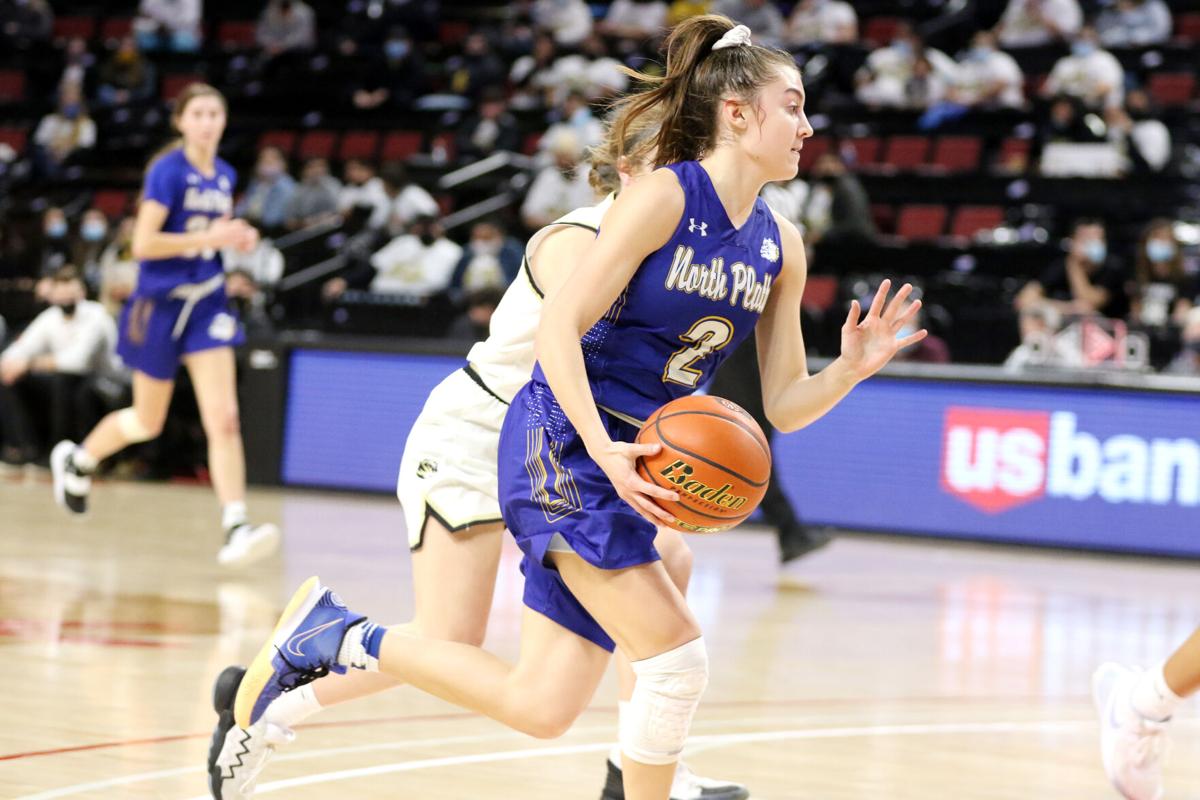 Gracie Haneborg drives to the basket during North Platte’s 72-37 loss to Fremont in the quarterfinals of the NSAA Class A sta​te tournament on Tuesday at Pinnacle Bank Arena in Lincoln. 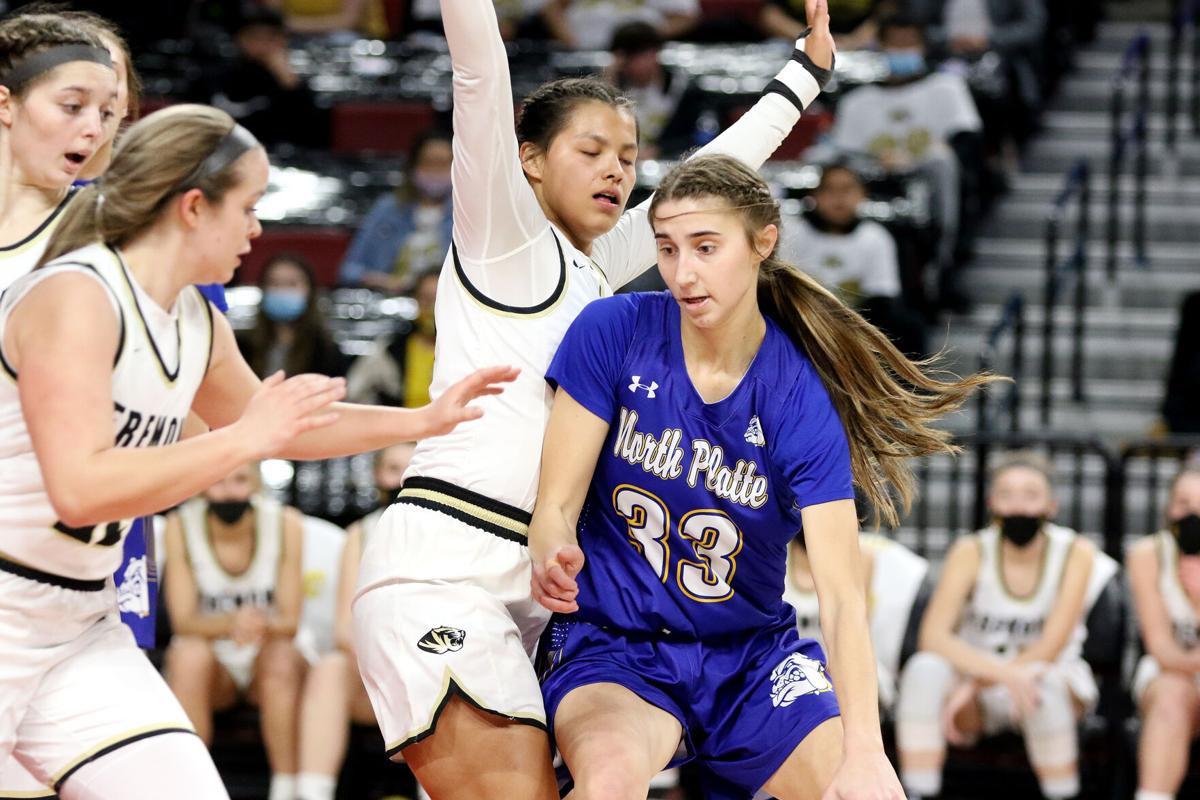 Abby Orr tries to move toward the basket as a Fremont defender guards her during North Platte’s 72-37 loss to Fremont in the quarterfinals of the NSAA Class A sta​te tournament on Tuesday at Pinnacle Bank Arena in Lincoln.

In her last game as a North Platte Bulldog, senior Gracie Haneborg led her team with 16 points.

But half-court pressure and a flurry of 3-point shots helped the Fremont Tigers defeat North Platte 72-37 on Friday in the first round of the NSAA Class A Tournament at Pinnacle Bank Arena in Lincoln.

“Fremont’s a really good team. They put a lot of pressure on you to cover the 3 and stop drives,” North Platte coach Tyson Hammond said. “Unfortunately for us, we just picked a really bad time … the effort was great, but everyone was trying so hard to do it on their own. We didn’t do a great job of just executing the things we normally do. The nerves got us a little bit.”

The Bulldogs kept things close in the first quarter. Both teams traded baskets to open the game, but Fremont took a 7-2 lead capped with the first of 11 3’s on the night.

North Platte’s Carly Purdy later connected on back-to-back shots on the inside to pull the Bulldogs to within three, but a Fremont 3 extended its lead back out to six.

The Tigers were always ahead in the matchup, but North Platte made it a four-point game after freshman Clancy Brown made a 3. Fremont ended the quarter on a 5-0 run and took a 20-11 lead.

The Tigers pushed that to a 43-19 advantage at halftime thanks to four 3s and a series of runs where multiple players picked up points.

Fremont also used a 22-point third quarter to further push the game out of reach, all while holding North Platte to just eight.

“They’re a really good team and they do that to you,” Hammond said. “We just didn’t do a very good job of doing the things that we do well tonight.”

Haneborg and Orr, along with fellow seniors Tahjzha Botts, Malery States, Baileigh Pack and Keelee Soto, played in their final high school basketball game, ending their careers with a trip to Pinnacle Bank.

Hammond said it’s tough watching players like Haneborg and Orr, as well as all the seniors, play their last game as a Bulldog.

“It’s pretty hard. For me, those two have meant so much to our program, so much to me as a coach,” Hammond said. “Having them as kids in our program … they’re great kids, they work hard. They want to be successful. They don’t want it to end, and that’s the hard part.”

Brown and Purdy, both underclassmen, are the only two starters returning next season, as Haneborg, Orr and Botts are seniors.

Haneborg ends her career as one of the most decorated basketball players in North Platte history, and Hammond said it helps having Haneborg and the seniors around for the younger players to watch and learn from seeing them play together.

“I hope they’ve learned what it takes to be as good as what (the seniors have) been and they see the work that goes into it,” Hammond said. “And what it means to care for your team, and what it means to care for your teammates and your friends. More than anything, I hope that’s what they take away from it, just how amazing it is to be a part of a team that loves each other and wants to play with each other.”

Two-Minute Drill: After watching a full practice, here's what stood out to us

Gothenburg played host to the Dutch Zorn Invite on Thursday, which was won on the girls’ side by McCook and on the boys' side by Aurora.

NSAA decided Thursday that Lake Maloney and River's Edge golf courses will host the Class D state golf tournament through 2024. Lake Maloney will host in 2022, and the site for 2023 and 2024 will be determined later. The 2021 event is scheduled for Lake Maloney in May.

Roberts signed her letter of intent with NPCC on Friday.

Gracie Haneborg drives to the basket during North Platte’s 72-37 loss to Fremont in the quarterfinals of the NSAA Class A sta​te tournament on Tuesday at Pinnacle Bank Arena in Lincoln.

Abby Orr tries to move toward the basket as a Fremont defender guards her during North Platte’s 72-37 loss to Fremont in the quarterfinals of the NSAA Class A sta​te tournament on Tuesday at Pinnacle Bank Arena in Lincoln.