Husker Extra Podcast: Breaking down the latest in spring football and the new transfer and recruiting rules

The workmanlike attitude Will Bolt craves from his Nebraska baseball team came in handy on a day when the Huskers didn't have their best stuff.

Overcoming some uncharacteristic sloppiness in the field and an underwhelming day at the plate, the Huskers beat Penn State 5-3 Sunday to sweep the road series against the Nittany Lions.

NU has won four games in a row, six of its last seven, and 13 of its last 15 games to improve to 18-6 and stay atop the Big Ten standings.

"We talk about how the most mentally tough team is going to win every time," Bolt said on the Husker Sports Radio Network. "And it shows up on Sunday, where maybe you don't have your best bat speed; maybe your legs aren't quite as fresh. You've just got to find a way to grind through it and get it done, and I'm proud of our guys for finishing the weekend off."

Nebraska won despite committing two errors, stranding 10 runners and having a runner thrown out at the plate on a squeeze play.

That's because Penn State was even sloppier. The Nittany Lions (8-16) committed four errors, walked five and hit a batter. Four of the walks came from Nittany Lions starter Kyle Virbitsky, who had walked just six batters all season.

"Today was one of those games," Bolt said. "We didn't play our best, but I thought we did a nice job against their starter. We just didn't get that knockout punch."

Nebraska right-hander Shay Schanaman improved to 4-0, scattering seven hits and allowing three runs (two earned) over six innings while striking out five and walking none. The strong outing came one week after the Grand Island native struck out a career-best 11 against Maryland.

Over his last four starts, Schanaman has struck out 28 against just two walks.

"I'm glad to see him back up the performance he had last week with another good one today," Bolt said. "We probably caused him to throw probably 20 more pitches than he needed to just by not playing defense behind him. I thought he was very competitive. ... He just didn't give them the chance to have a big inning against him."

Jake Bunz worked a scoreless seventh inning, and Spencer Schwellenbach picked up a six-out save by retiring all six batters he faced over the final two innings.

Schwellenbach's outing on the mound started with a spectacular play by his replacement at shortstop. Efry Cervantes, ranging hard to his right, gloved a ground ball off the bat of Penn State's Tayven Kelley and fired across his body while drifting into shallow left field for the first out of the eighth inning.

Anderson finished 2-for-5, the only Husker with more than one hit. Cam Chick scored two runs while Joe Acker added a double. 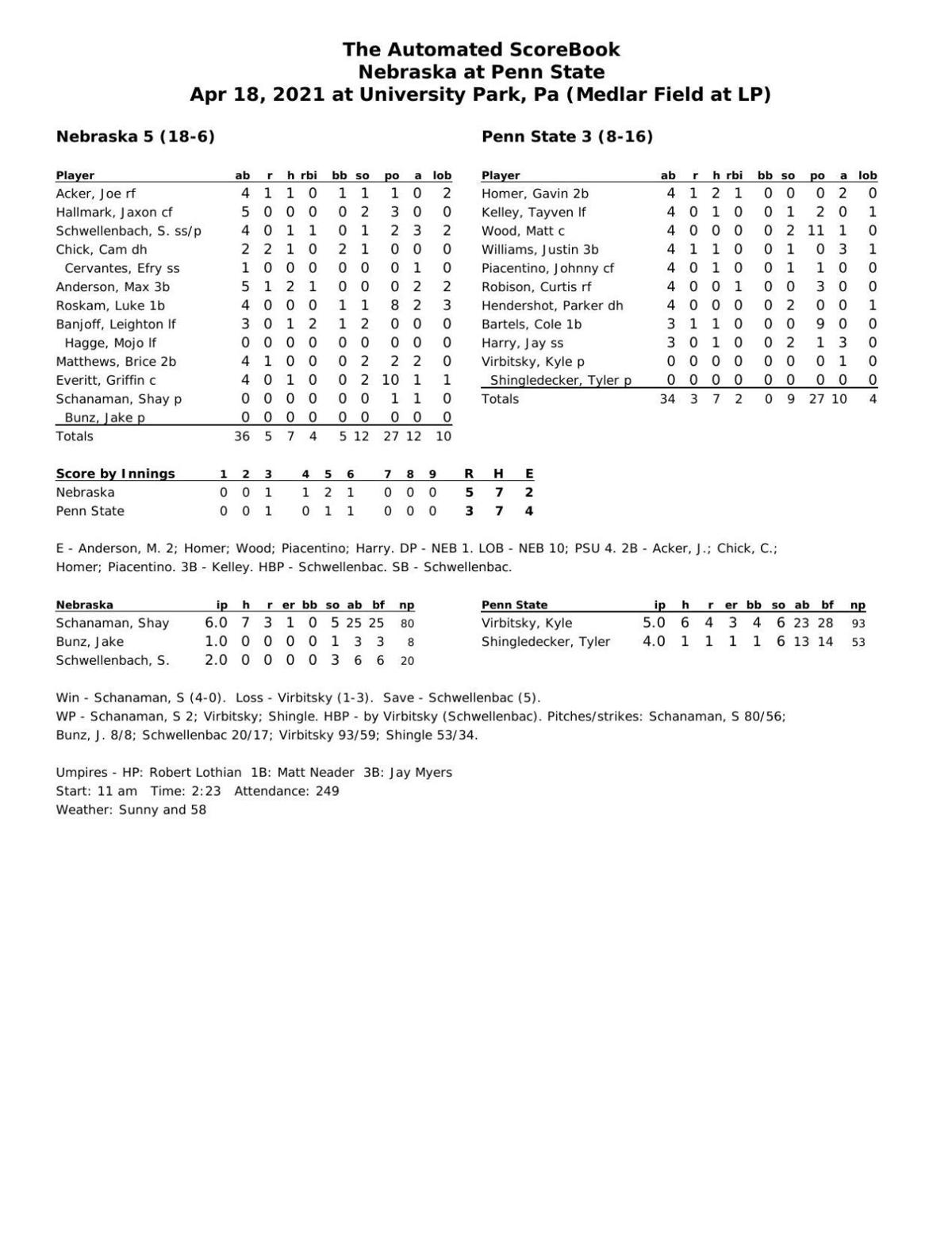 In high school, the power hitting outfielder from South Dakota had football offers from Wyoming and Kansas State, among others.