Less than 18 hours after trailing by a run after six innings, the Nebraska baseball team needed only the first handful of at-bats Saturday to erase any drama.

The Huskers scored five runs before Penn State got a chance to step to the plate en route to an 11-2 win victory in State College, Pennsylvania. NU, which won Friday's series opener 8-2, clinched the series.

Big jump at the plate, behind the plate, and in the field lead to best start of Roskam's career

"What a tone that we set there," NU coach Will Bolt said of his team's quick start during his postgame radio appearance. "Their guy (Conor Larkin) is coming out with a low slot, going 93, 94 right out of the chute, and we knew that's what he was going to have."

Nebraska scored seven runs over the final three innings Friday night, and the offensive mojo carried over into Saturday.

Jaxon Hallmark, now hitting .426, led the Huskers' 17-hit attack, finishing 4-for-5 with two RBIs and three runs scored. Cam Chick and Max Anderson each had three hits, and Luke Roskam added a single and a double.

Nebraska was 9-for-21 with runners in scoring position, and six of its final seven runs came with two outs, including two off the bat of Hallmark in the seventh inning, which stretched the lead to 10-2.

Could a NCAA baseball regional come to Lincoln? Huskers hope so after submitting bid

"That was the theme of the day for me offensively, the first six innings, it was an incredible onslaught of just being ready to hit and competing with two strikes, two-out RBIs," Bolt said. "I just thought it was an amazing job top to bottom for nine innings."

Meanwhile, Chance Hroch had his longest start as a Husker. The New Mexico State transfer had the sinker ball working — he induced 12 ground outs — as he scattered five hits over seven innings and struck out three. He retired the final seven batters he faced.

"You could tell right away, too, that the sink was there today," Bolt said. "The thing that he did today, he limited the big innings where they got multiple hits in an inning on him."

Five of the Huskers' first six batters connected for hits against Larkin (2-4) to begin the game. The scoring splurge included two-run hits from Spencer Schwellenbach and Roskam, and freshman Brice Matthews continued his hot stretch with an RBI single to left field.

That gave Hroch a five-run cushion to work with before throwing his first of 91 pitches. The senior (3-0) earned his first win since March 13, breaking a string of four no-decisions. His longest outings before Saturday lasted six innings against Iowa and Purdue to begin the season.

Max Schreiber had one of his best relief outings of the season, striking out the side in the eighth inning for the Huskers, who have won six straight series. 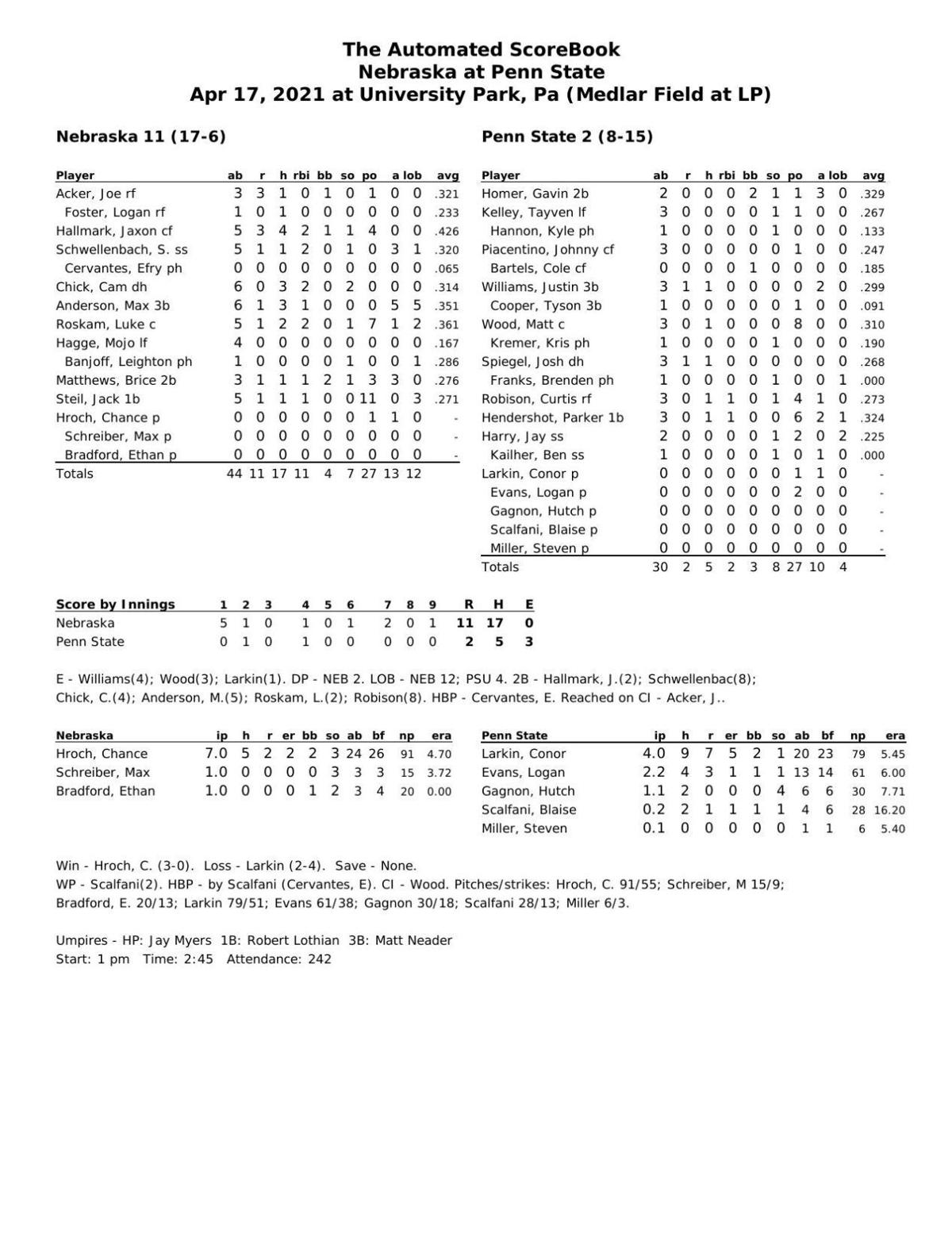 Reach Clark Grell at 402-473-2639 or cgrell@journalstar.com. On Twitter at @LJSSportsGrell.

A bit of everything in NU's first game of the weekend: 10 Husker walks, five Indiana errors and an hourlong rain delay.

Huskers may soon get shot in arm with Perry's return, and it comes ahead of critical stretch

Pitcher Kyle Perry is getting closer to becoming game-ready as Nebraska enters a rigorous final month of the season.

'We laid a big egg': Huskers get swept at home for first time since 2009 after shutout

It marked the first time No. 22 Nebraska has been swept in a conference series since 2016, when the Huskers lost three games at Michigan.

The Huskers hit three home runs to jump out to a 5-0 lead. But, for the second straight night, the Scarlet Knights came storming back for a series-clinching win.

Husker Extra Podcast: Wrapping up spring ball and looking ahead to the Huskers' summer

'They finished it off, and we didn't': Rutgers pours it on late to send Huskers to first loss as a ranked team