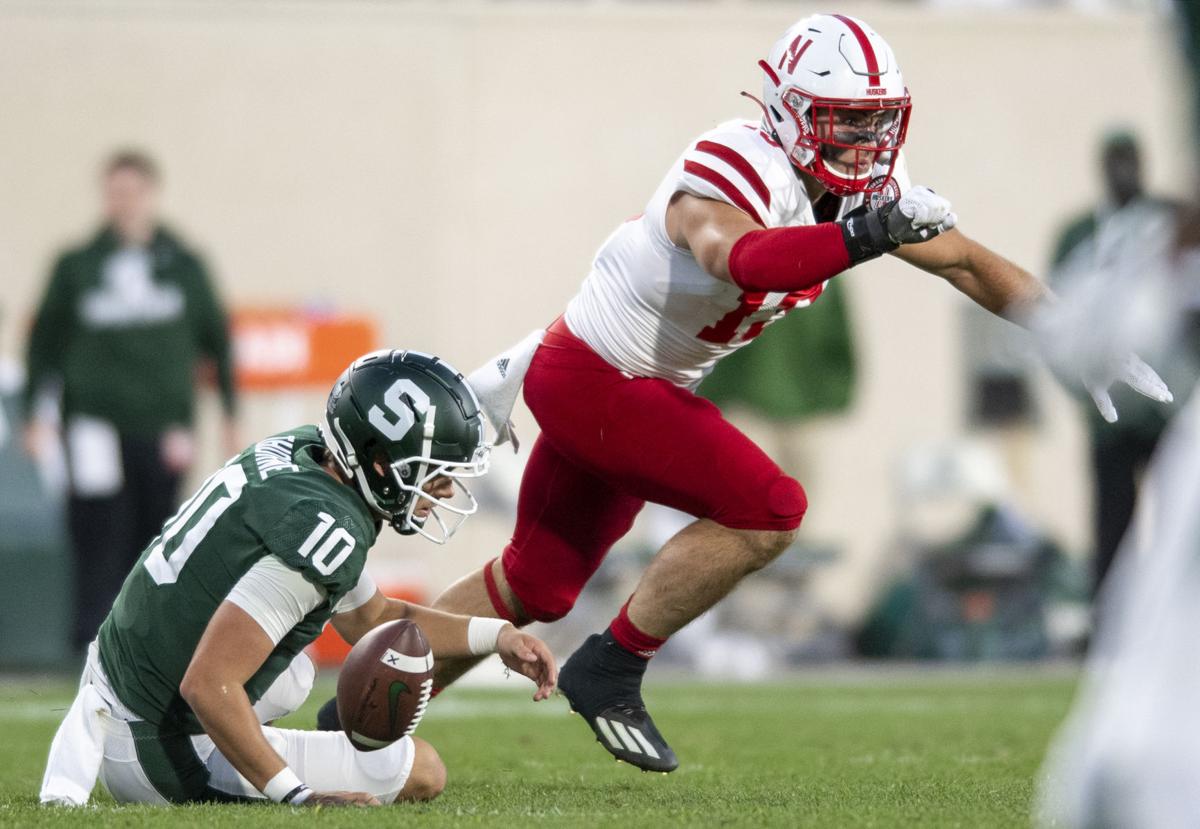 Nebraska's JoJo Domann (right) celebrates after taking down Michigan State quarterback Payton Thorne (10) in the first half on Saturday in East Lansing, Mich. 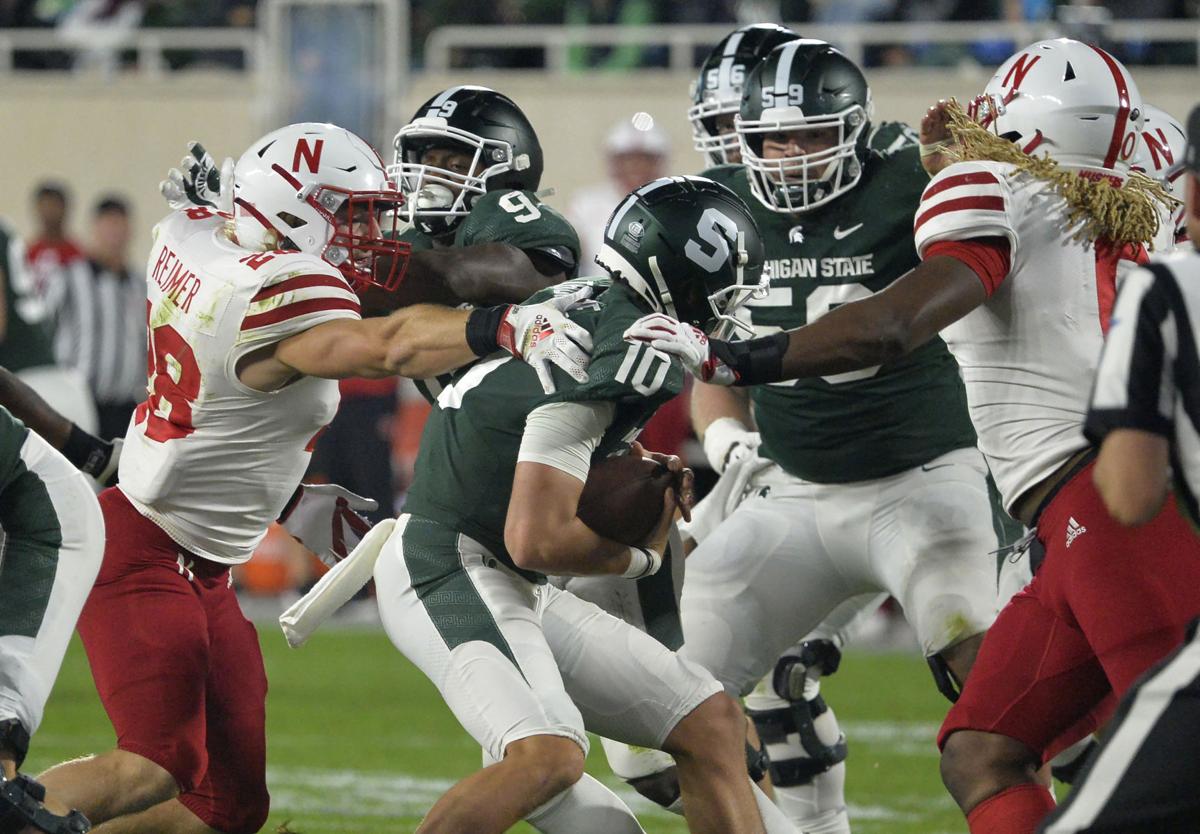 EAST LANSING, Mich. — A week after being challenged by one of the nation's top quarterbacks, Nebraska's defense faced a big test against the nation's leading rusher.

The Blackshirts answered the challenge.

Walker entered leading the country in rushing at 164 yards per contest. His longest, and most important, run came on the Spartans' first offensive play of overtime when he rumbled up the gut for 23 yards.

Nebraska was very physical throughout the game. It had eight tackles behind the line of scrimmage and had Michigan State in third-and-long on several occasions.

NU dominated Michigan State's offense in the second half. The Spartans went the third and fourth quarters without a first down and only 14 yards of total offense.

NU senior JoJo Domann was asked if the defense could have done more.

"Yeah, get the ball out," he said. "We had a good half, but it wasn't great my any means, and we've all got more to give. This whole team has more to give."

NU also recorded three sacks, and an interception on the game's opening series.

"We're playing at a high level on defense, and that's why it's so mystifying that we punt the ball 40 yards off-target," NU coach Scott Frost said.

"The rest of our team needs to step up," NU quarterback Adrian Martinez said of the defense's performance. "They're the backbone of this team."

More laundry on the field: Nebraska was looking to clean up the penalties after committing eight — including four on its first offensive series — last week at Oklahoma.

NU had more issues in another road environment, especially at offensive line.

Frost was seen in the faces of his offensive linemen as they came off the field after the drive.

"We can't have four false starts," Frost said. "Coach (Greg) Austin stands behind those guys every day in practice and yells, 'Move,' and gets the D-line to shift. Everything we know how to do to keep them from doing it, they got to stay calm and do their job and not jump. It probably cost us points in the first half."

Michigan State was unable to capitalize on a 15-yard roughing penalty on Deontre Thomas in the first half.

Heavy on the option: Nebraska has sprinkled the option into game plans for Fordham, Buffalo and Oklahoma.

Nebraska ramped it up against Michigan State, using several players as the pitchman, including Levi Falck, Brody Belt and Samori Toure.

Martinez scored on a counter option play to give the Huskers a 20-13 lead in the fourth quarter.

Injury updates: Nebraska welcomed back a couple of veterans on Saturday night after lengthy absences, but also played without junior wide receiver Oliver Martin for the fourth straight week.

Bando, who had not dressed the past two weeks for NU due to a non-COVID illness, returned to action first as part of the Huskers' special teams units in the first half.

Rogers missed the first four games of the season with an apparent knee injury.

Martin, meanwhile, has an apparent knee injury and now has missed four games after leading NU with six catches for 103 yards against Illinois.

Frost said Thursday that he had hoped Martin would be available this week, but he’ll have to wait until at least Oct. 2 against Northwestern.

Freshman wide receiver Zavier Betts, who had five first-half catches, was not available in the second half, Frost said.

Martinez left the game for a series after getting sandwiched on a third-down play on the opening drive. Logan Smothers ran the offense on NU's next series before Martinez returned.

"I knew it would be a matter of time before (I was back on the field)," Martinez said.

He carried the ball on an option pitch earlier in the game. His 15-yard catch ignited the Huskers go-ahead touchdown drive.

The Nebraska athletic director offered a frank assessment of the officiating in the Huskers' narrow loss to Michigan earlier this month.

During the bye week, members of NU's staff, including Scott Frost, hit the recruiting trail: "The response was awesome," he says."

We do, however, know one time slot the Nebraska-Ohio State game at Memorial Stadium will not be in.

Sacks, kicks, empties and explosives: The numbers that will determine whether NU can mount a post-bye push

Parker Gabriel crunches the numbers that could result in 6, as in the number of wins needed for Nebraska to sneak into a bowl game this season.

RB Rahmir Johnson should be ready to go for Nebraska against a Purdue defense that is "much improved," according to NU OC Matt Lubick.

Scott Frost's Huskers have failed to summit Mt. Close. The key? 'Get an inch better'

C-l-o-s-e. The five-letter word has become a source of frustration among coaches, players, and yes, the fans. How does NU overcome it?

Husker QB Adrian Martinez says he won't think about his future until after season; 'All attention on Purdue'

All but eight of the Huskers’ scholarship players have eligibility remaining after this season, but no decision will be monitored more than Martinez's.

Erik Chinander — who coached in NU's Oct. 16 loss at Minnesota — said he learned nearly everything about being a coach from his father.

It's come full-circle for Myles Farmer, who suffered a freak accident during warmups before playing Purdue last season.

Nebraska's JoJo Domann (right) celebrates after taking down Michigan State quarterback Payton Thorne (10) in the first half on Saturday in East Lansing, Mich.