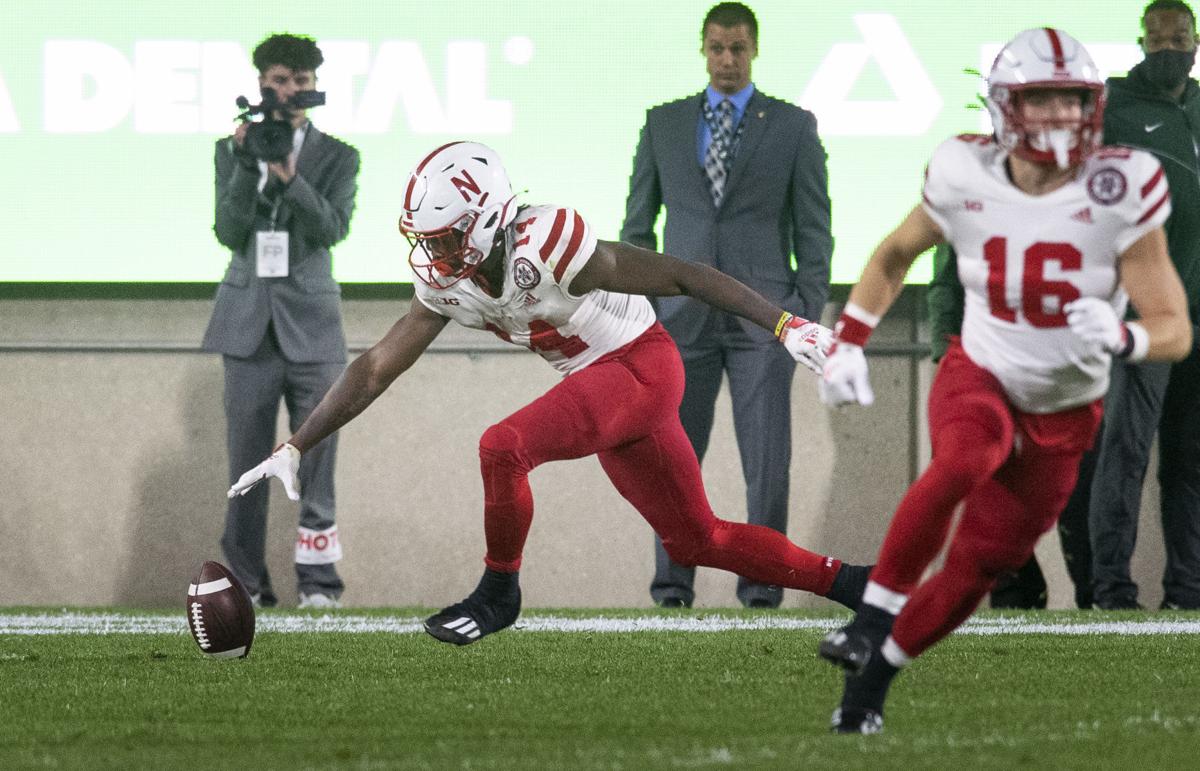 Nebraska running back Rahmir Johnson chases the ball on a kickoff return in the fourth quarter against Michigan State on Saturday, Sept. 25, at Spartan Stadium in East Lansing, Mich. 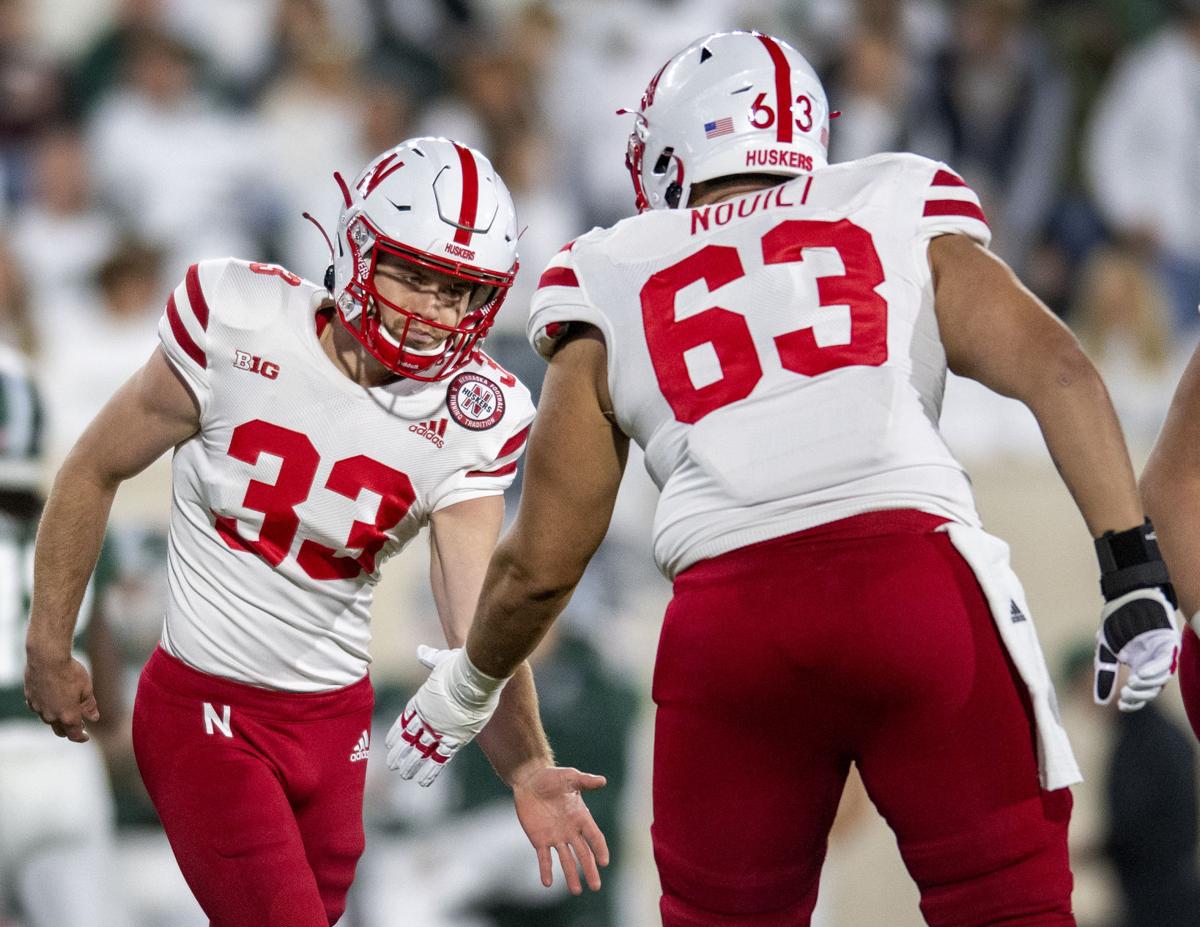 Nebraska kicker Connor Culp (33) is congratulated by teammate Nouredin Nouili after converting a field goal against Michigan State in the first half Saturday in East Lansing, Mich.

And special plays from quarterback Adrian Martinez couldn't save Nebraska in a 23-20 overtime loss at 20th-ranked Michigan State on Saturday night.

The Huskers owned the second half but eventually made the critical error.

"Punt right" will forever be known as "Punt wrong."

Daniel Cerni, the right-footed half of Nebraska's pair of abysmal punters, booted the ball in the wrong direction with the coverage racing to the right. Instead, the Spartans' Jayden Reed grabbed a low, 34-yard kick and returned it for a 62-yard score to tie the game at 20 with 3:47 left.

"Pretty simple," Nebraska coach Scott Frost said, staring straight ahead while describing a lost ball of a boot. "That's a punt where we're supposed to kick the ball to the right sideline. And the ball went to the left sideline."

Reed tells it differently. He said MSU's plan for punt misdirection was one that the coaches had been waiting to use. And use it the Spartans did, at just the right time against just the right team with just the left kick.

"It was something we've been working on for a few weeks now," Reed said. "It was something we had to execute the way the coaches called it. We had a little decoy by (opposite return man) Jalen Nailor that took the whole defense that way."

It was MSU's first punt return for a score since Keshawn Martin went 57 yards against Northwestern 10 years ago and the Spartans' best special teams play since "Whoa, he has trouble with the snap!" — a miraculous botched-punt runback by Jalen Watts-Jackson with 10 seconds left that beat Michigan in 2015.

"We've got to punt the ball," Frost said. "We have guys at the university specifically for the reason to punt it. And we have a couple of 10-yard punts. When we need it most, we kick it to the wrong side of the field. Some of the coverage guys didn't see it, and it cost us the game."

That horrendous mistake by the Huskers wasn't their only special teams blunder. It was just the most costly and most memorable.

William Przystup, a left-footed transfer from, yes, MSU, averaged 29.5 yards on four punts, including a 7-yard shank. And that lost real estate was even more glaring when the Spartans' Bryce Baringer boomed six kicks for a 58.8-yard average.

Reed was also a massive factor with a 35-yard touchdown catch and a 41-yard kickoff return that led to a field goal. The Huskers' coverage was shoddy long before a punt return with less traffic than a country road at 3 a.m.

Ironically, Connor Culp, who had struggled with field goals for much of the season, connected twice from 28 yards and tied the game at 13 early in the third quarter, the first of back-to-back periods when MSU went without a single first down.

The Spartans only needed one first down in overtime on a wildcat keeper from otherwise bottled-up Kenneth Walker, the NCAA rushing leader, to set up Matt Coghlin's 21-yarder in overtime, the game-winning kick but not the most important one.

The Huskers and Spartans battled under the lights Saturday in East Lansing, Michigan. Photos by Justin Wan and Mike Theiler

Nebraska running back Rahmir Johnson chases the ball on a kickoff return in the fourth quarter against Michigan State on Saturday, Sept. 25, at Spartan Stadium in East Lansing, Mich.

Nebraska kicker Connor Culp (33) is congratulated by teammate Nouredin Nouili after converting a field goal against Michigan State in the first half Saturday in East Lansing, Mich.