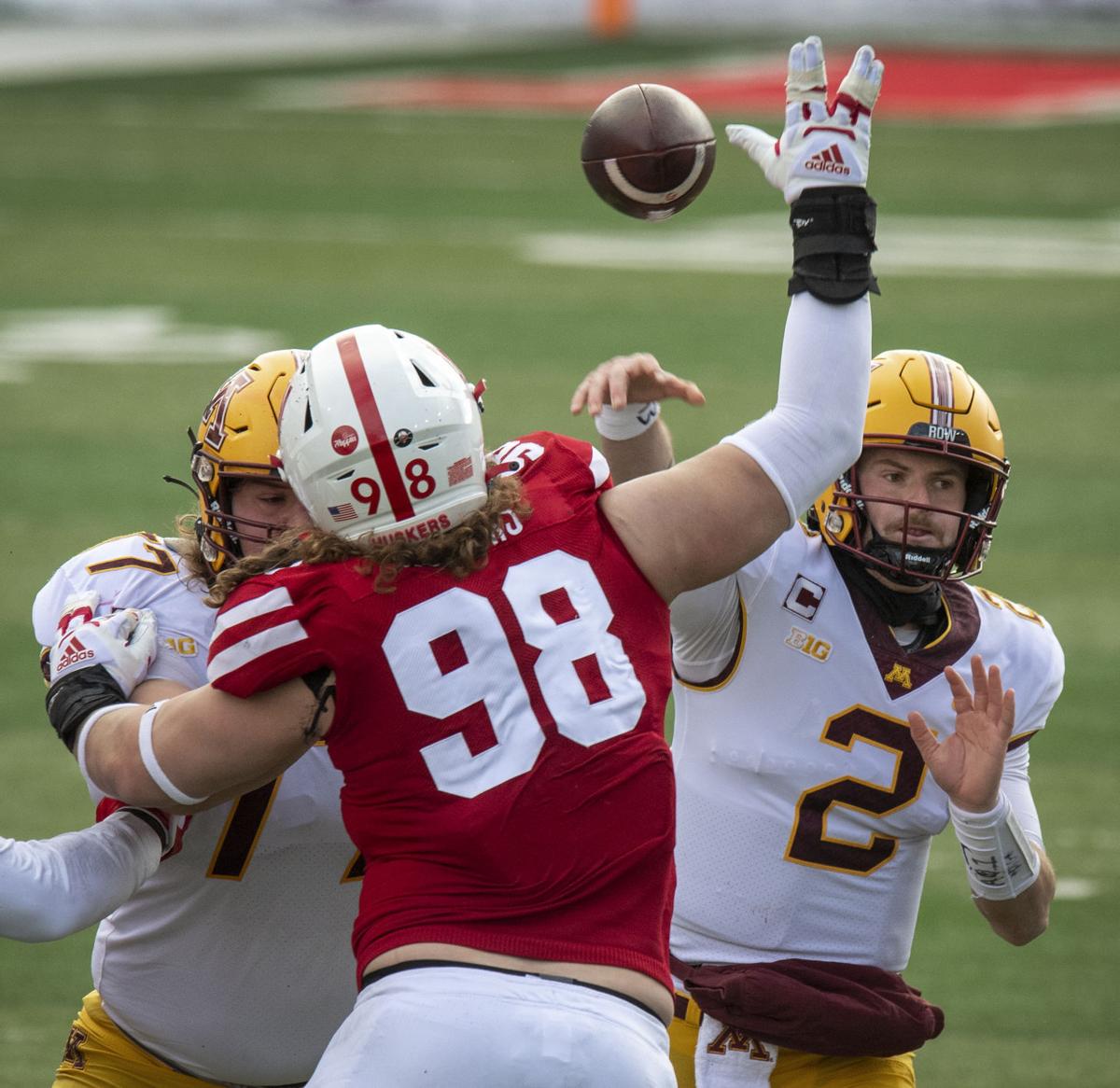 Nebraska defensive lineman Casey Rogers (98) gets a hand on a fourth-down pass from Minnesota QB Tanner Morgan (2) in a Dec. 12, 2020, game at Memorial Stadium. 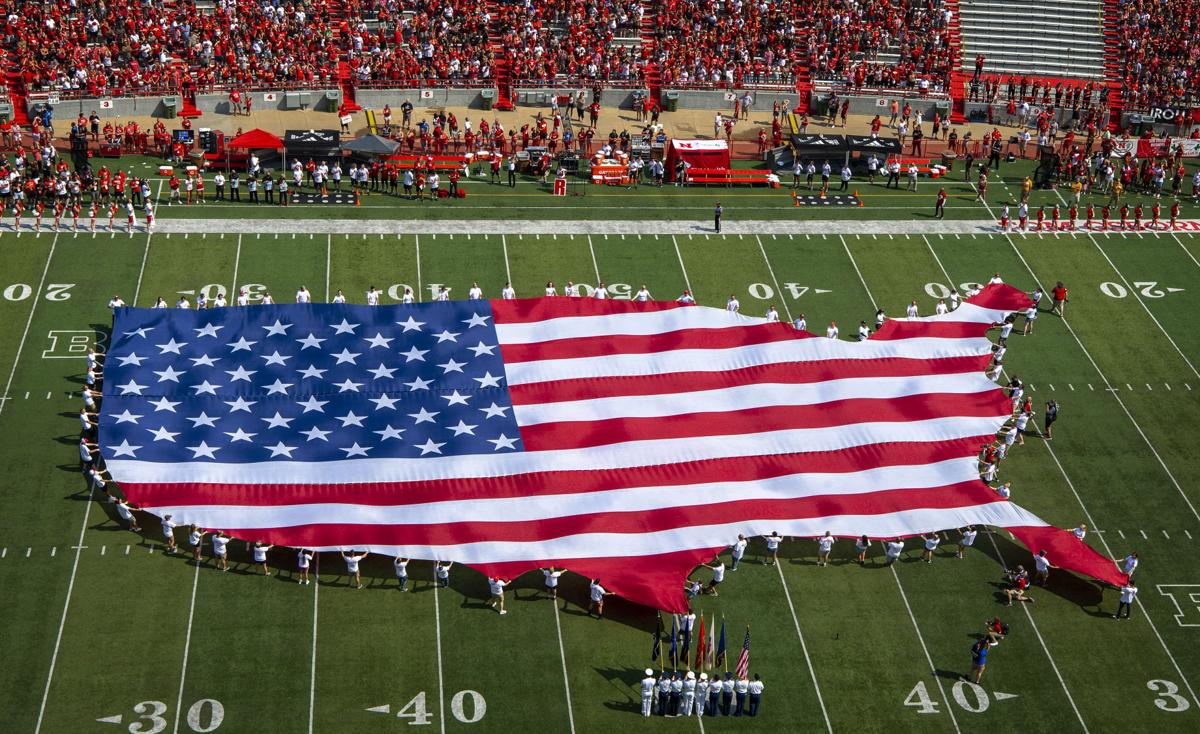 The Stars and Stripes are on the field during the national anthem on Saturday before Nebraska hosts Buffalo at Memorial Stadium. 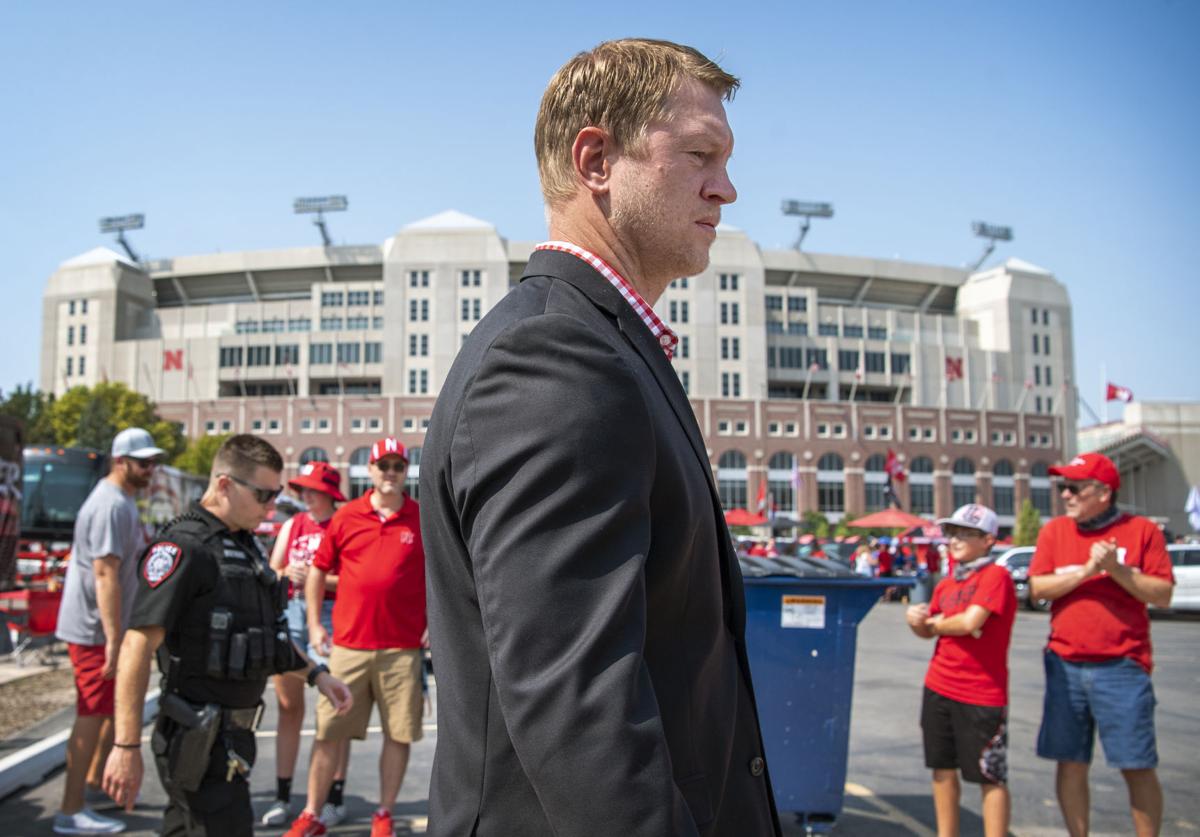 Nebraska head coach Scott Frost follows the team off the buses for the Unity Walk on Saturday at Memorial Stadium.

It's going to be a hot one at Memorial Stadium on Saturday. The pregame thermometer reads 85 with almost two hours still before kickoff. High temperatures are forecast to be near 100 degrees.

* Nebraska is going to be down a couple of receivers in its rotation against Buffalo.

Junior Omar Manning was in street clothes during early warmups and had a boot on his left foot. There was also no sign of fellow junior Oliver Martin, who missed last week's game against Fordham with what head coach Scott Frost deemed a minor injury. He led NU in receiving with six catches for 103 yards against Illinois.

Manning had been targeted five times through NU's first two games and has five catches for 80 yards.

* During early warmups, injured Nebraska tight end Travis Vokolek and defensive end Casey Rogers were out on the field getting a good workout in.

Vokolek had a heavy wrap on his left ankle and Rogers had a heavy sleeve over his left knee. Scott Frost said during the week that both are "very close" to returning and a pregame workout would be at least one more step in that direction even if they don't play this week.

When the defensive linemen returned to the field, Rogers was not dressed in  the same warmups as the other guys, meaning he's likely to miss his third straight game to begin the season.

Rogers and Mosai Newsom remain shelved on the defensive line, but Tony Tuioti does appear to be getting walk-on Colton Feist back this week. Feist, Tuioti said at the beginning of the season, had put himself in position to play before an injury took him out of the early season equation. He was seen at practice last month with his left foot in a boot and using a scooter to get around.

* Offensive lineman Broc Bando also appears to be out for the second straight week. Redshirt freshman defensive back Noa Pola-Gates is also not in uniform. He had appeared in each of Nebraska's first two games.

* Former Husker running back Damon Benning is on the Big Ten Network broadcast on Saturday as the analyst with play-by-play man Brandon Gaudin after a late switch in the lineup.

'I thought tonight was the night': Brutal trend under Scott Frost continues as No. 9 Michigan escapes Nebraska

How many more times will Nebraska knock on the door before finally rising up and knocking it down? That's how Parker Gabriel kicks this one off.

16 drives, 3 points: Why has Nebraska struggled so much in late-game, two-minute situations?

A deep dive on Nebraska’s production (and lack thereof) in two-minute situations under Scott Frost, with input from Matt Lubick and Mario Verduzco.

Nebraska defensive lineman Casey Rogers (98) gets a hand on a fourth-down pass from Minnesota QB Tanner Morgan (2) in a Dec. 12, 2020, game at Memorial Stadium.

The Stars and Stripes are on the field during the national anthem on Saturday before Nebraska hosts Buffalo at Memorial Stadium.

Nebraska head coach Scott Frost follows the team off the buses for the Unity Walk on Saturday at Memorial Stadium.