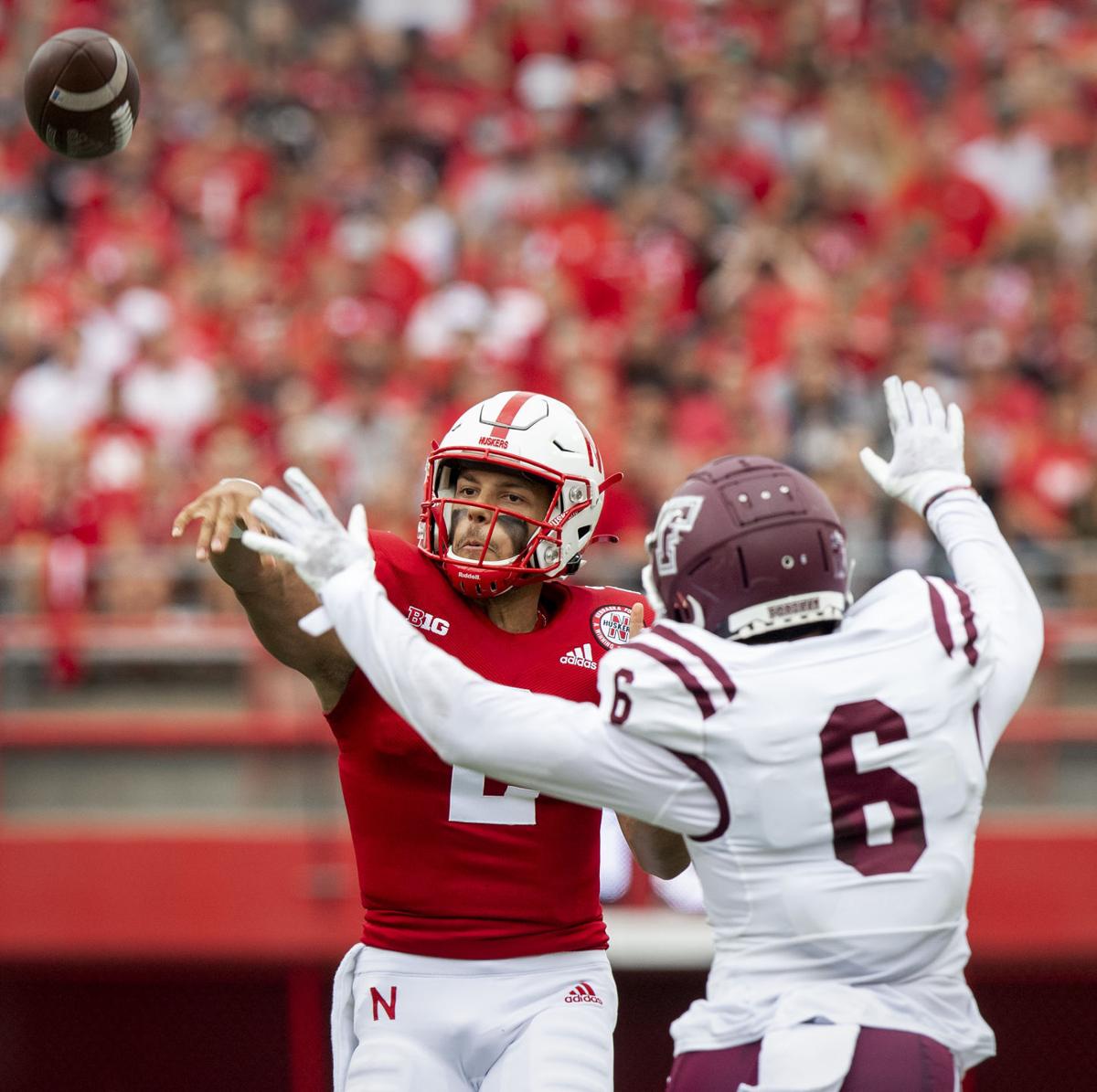 Nebraska quarterback Adrian Martinez throws under pressure from Fordham's Jesse Bramble (6) in the first half Saturday at Memorial Stadium. 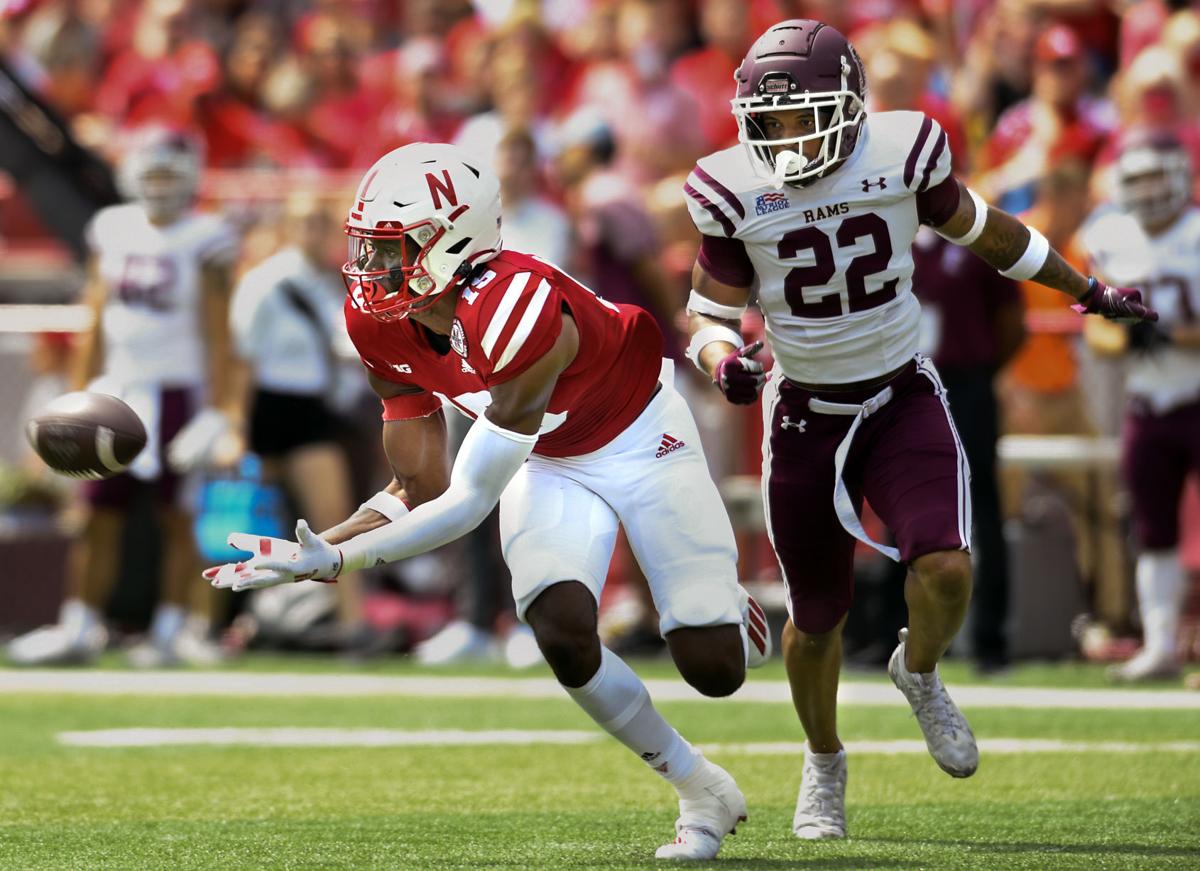 Nebraska receiver Zavier Betts hauls in a pass in front of Fordham defensive back Deon Montgomery in the second half Saturday at Memorial Stadium.

Adrian Martinez against Fordham last Saturday completed six of his first nine passing attempts, but aside from two short throws that junior tight end Austin Allen turned into gains of 16 and 10 yards, the results were mostly modest gains.

On those first nine attempts, Martinez averaged 4.4 yards and had completions of 2, 9, 9 and minus-1.

The final completion came on a swing pass to running back Sevion Morrison that was stopped behind the line of scrimmage on third-and-4 and resulted in Nebraska’s second punt in three possessions. The Rams covered well right away, but left tackle Turner Corcoran also over-set against his man and allowed a quick inside pressure, flushing Martinez to his left. Pressed into the boundary, Martinez didn’t have much of an option but to dump the ball to Morrison and hope for the best.

Corcoran said Monday that offensive line coach Greg Austin "got on my ass" about the mistake, and he and the offensive line settled in and played better from there.

That helped spur a dramatic jump in passing production.

Martinez averaged 15 yards over his final 14 attempts (19.1 per completion), logged six completions of 23 or more and generally diced up the Rams' defense down the field until his work was done late in the third quarter. By that time, NU had scored on six straight drives and would add two more with Logan Smothers running the show down the stretch.

The only completion that didn’t go for a first down or a touchdown came on a third-and-5 that was immediately followed by a 25-yard completion to Samori Toure on fourth down.

“Throwing the ball down the field is everybody,” offensive coordinator Matt Lubick said Tuesday. “It’s the offensive line protecting, it could be the running back protecting. Obviously, it’s the quarterback and the receivers getting open, that’s a big part of it, and it can also be what the defense is doing.

“We thought there were some things they were doing where we could throw the ball down the field based on their coverages, but you’ve still got to execute it.”

Protection certainly played a big role. Against Illinois, Martinez was sacked five times, scrambled seven times on designed pass plays and was hurried easily more than a dozen times on 46 called pass plays by the Journal Star’s count. He hit Oliver Martin on a 43-yard post, running back Markese Stepp on a 30-yard wheel route and had a couple of other chunk gains through the air, but NU couldn’t consistently push the ball down the field.

Part of that, clearly, is the level of competition. Nebraska will have to prove its line can protect, its receivers can get open and its quarterback can deliver the ball against much stiffer tests, beginning this week with Buffalo and escalating from there.

“We’ve got our work cut out for us from a pass-rush standpoint,” Lubick said of the Bulls. “They know how to put pressure on the quarterback, they cover well. The other team struggled to even get a first down against them. It’s going to be a really good test.”

NU did miss one big one early in the game. Receiver Wyatt Liewer ran past his defender and Martinez put the ball towards the inside part of the field because there was no safety help, but it landed harmlessly on the turf a yard or so beyond Liewer. It was the second close call he’s had to a touchdown in the first two weeks after being wide open in the end zone against Illinois and seeing the ball go over his head. Lubick said he thought this time, his receiver could have done more.

“The Illinois play, I thought we kind of missed him. I know Adrian wishes he could have that one back,” Lubick said. “The play this last game, where he got by the corner, he kind of misjudged that and he slowed down a step. I thought Adrian threw a really good ball. We’ve got to keep our speed. There’s always a give-and-take.

“First game we just missed him, second game if he keeps his speed, that might be a touchdown.”

It’s always better to learn the lesson in a win, and particularly on a day where Nebraska showed an element to its offense that’s been missing for more than a year. Nebraska has eight completions of 25-plus over the first two games of 2021 after having just 10 in eight games in 2020.

Now, can the Huskers continue to produce as the schedule stiffens?

“We’ve got a big challenge again this week and every week coming up, but I thought there was a lot of improvement there,” Lubick said. “We focused on it. We really focused in practice on pass protection, on different blitzes and getting our guys better in that area. You’ve still got to complete the pass. I thought Adrian did a good job standing in there, being poised, making some very accurate throws, and I thought the receivers did a good job, too, getting open.”

'I thought tonight was the night': Brutal trend under Scott Frost continues as No. 9 Michigan escapes Nebraska

How many more times will Nebraska knock on the door before finally rising up and knocking it down? That's how Parker Gabriel kicks this one off.

Sound waves: What others are saying about Saturday's Husker game

A look at some talking points after the Huskers' game against Michigan on Saturday.

A sellout crowd was ready to party late into the night. An entire fan base was ready. In the end, though, there was more heartache.

Chris Basnett weighs in with his report card from the Huskers' game against Michigan.

The Scene: Light show gives Husker fans one more reason to get off couch and into stadium

Nebraska officials plan on keeping the show going for the foreseeable future, with possible wrinkles. Hmm.

Nebraska quarterback Adrian Martinez throws under pressure from Fordham's Jesse Bramble (6) in the first half Saturday at Memorial Stadium.

Nebraska receiver Zavier Betts hauls in a pass in front of Fordham defensive back Deon Montgomery in the second half Saturday at Memorial Stadium.