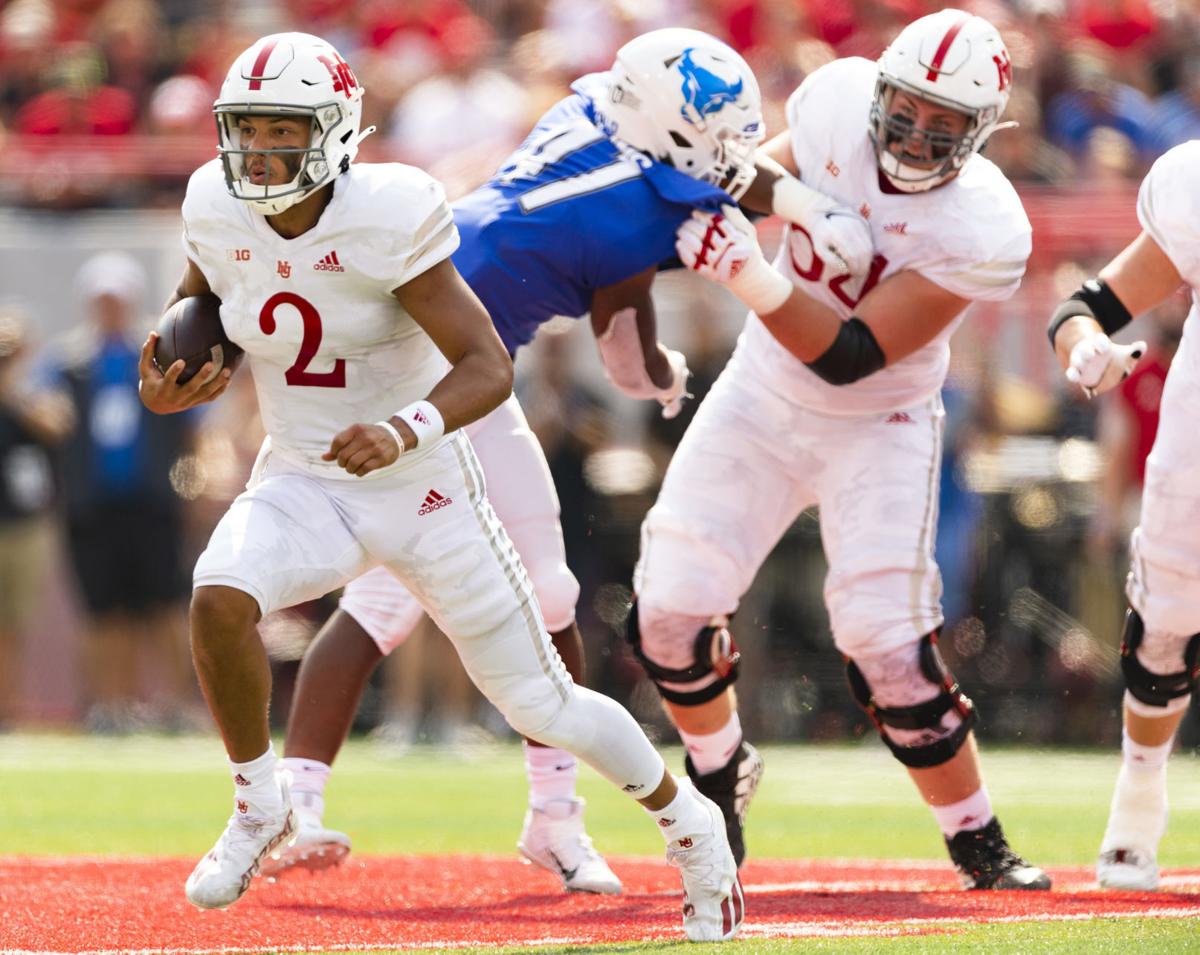 Nebraska's Adrian Martinez runs for yardage against Buffalo on Saturday at Memorial Stadium. 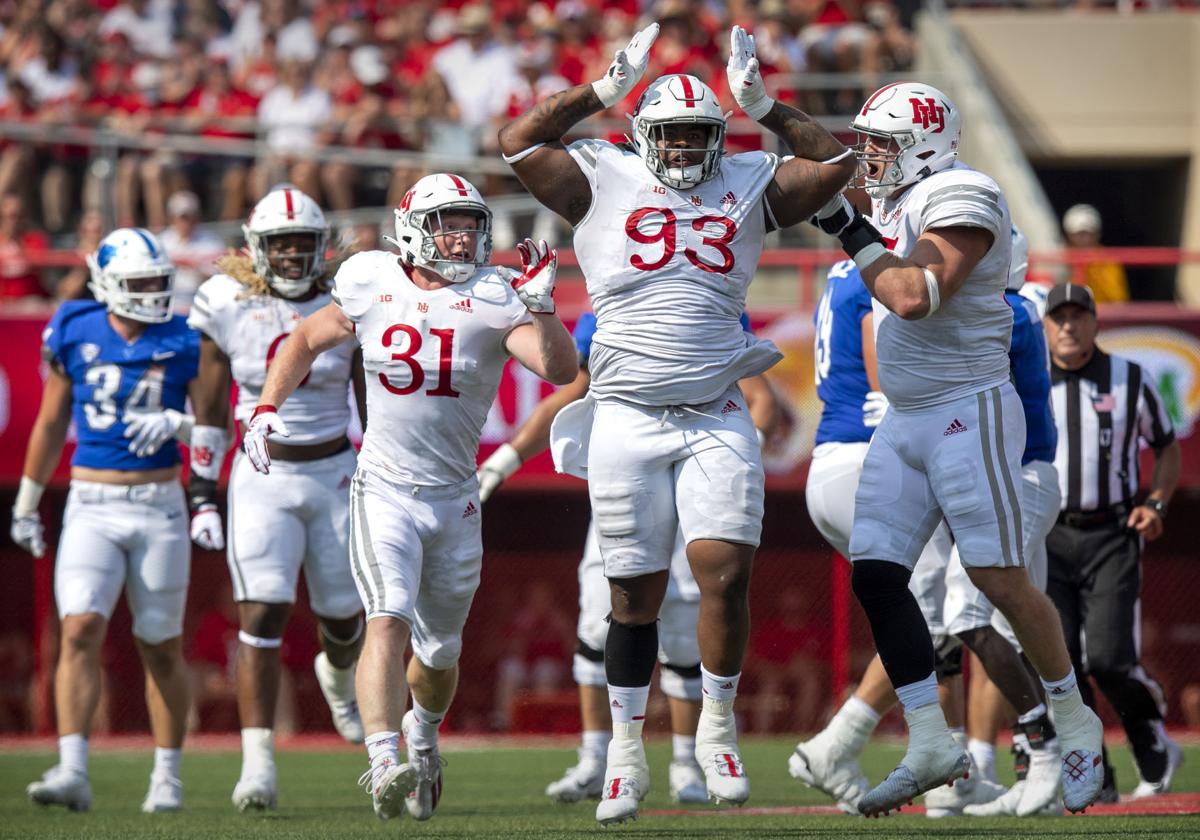 Nebraska defensive lineman Damion Daniels (93) celebrates a tackle for a loss in the second quarter against Buffalo on Sept. 11 at Memorial Stadium. 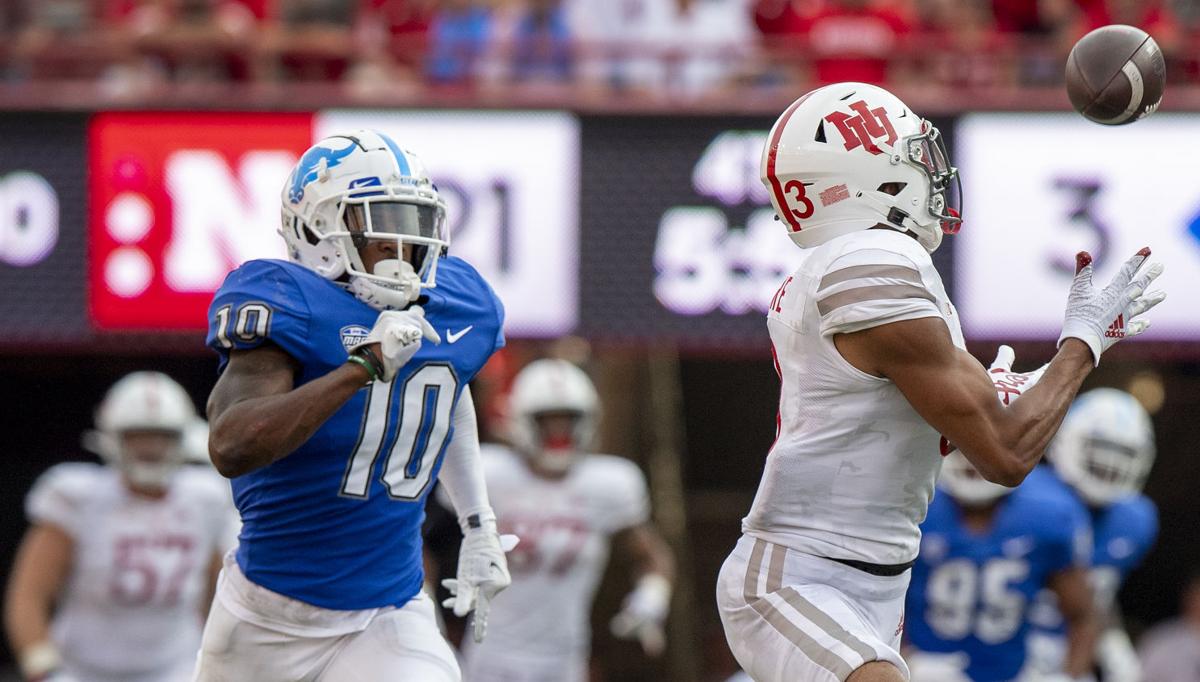 Nebraska wide receiver Samori Toure (3) catches a pass from Adrian Martinez before scoring in the fourth quarter against Buffalo's Marcus Fuqua on Saturday at Memorial Stadium. 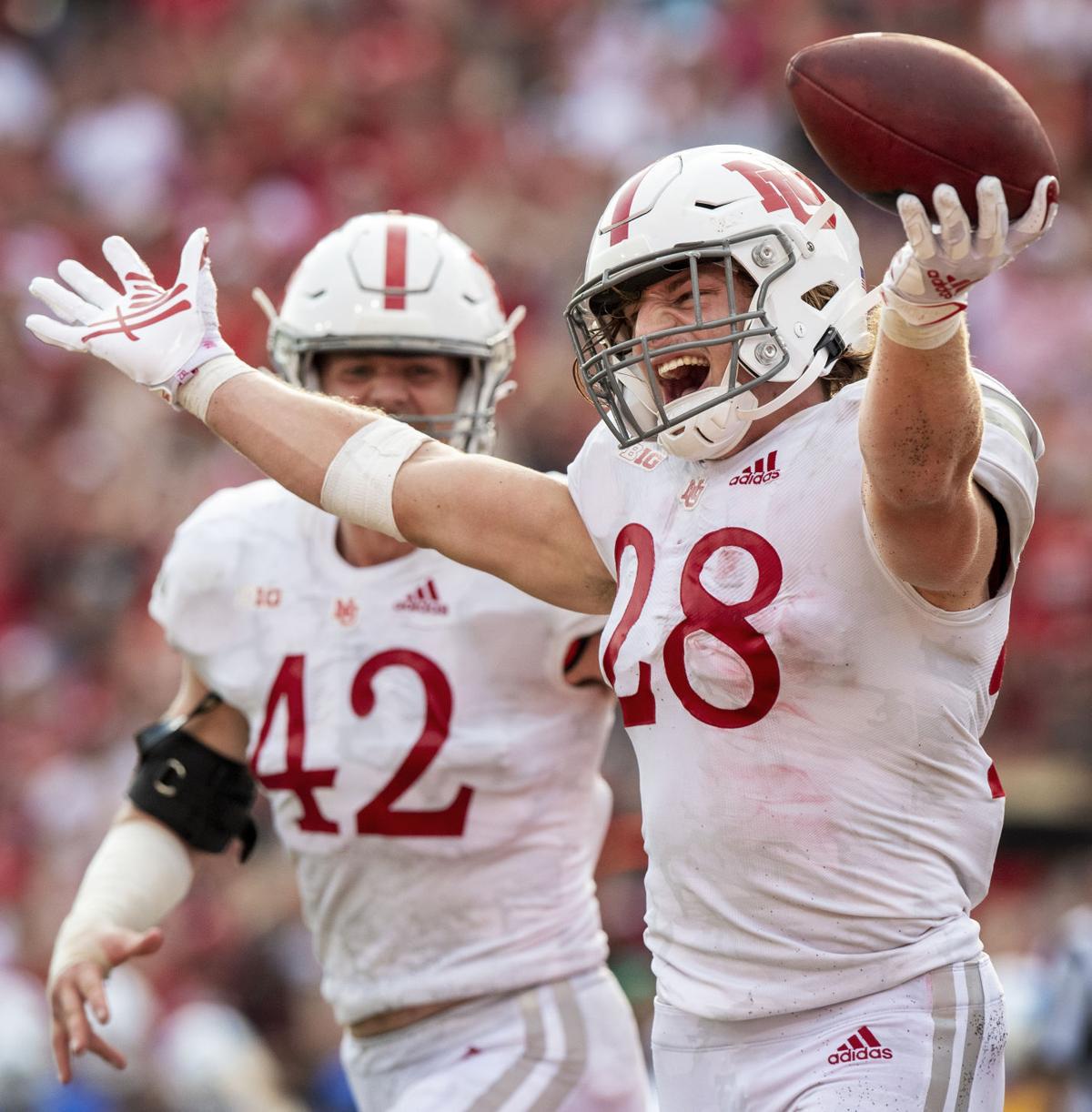 Nebraska’s offense already had a little bit of a M.A.S.H. unit vibe going when Buffalo dialed up a third-down blitz at the Huskers’ 25-yard line midway through the second quarter of a scoreless afternoon at Memorial Stadium.

Senior Bulls linebacker Kadofi Wright came free, too, and had a clean shot at Adrian Martinez.

The NU junior quarterback shrugged him off, stepped up, pinballed around a bit and then dashed for 71 yards. He handed the ball off to Gabe Ervin for a 2-yard touchdown on the next play. Then, in the final minute of the first half, he hit Samori Toure for a 68-yard touchdown to push NU’s lead to two scores.

The quarterback made most of the Huskers’ offense go during a 28-3 win as the injury bug took another bite out of an already depleted skill position group throughout the first half.

“I knew I had to make a guy miss, ran into my own O-lineman — (Ethan) Piper — but he’s blocking a guy,” Martinez said of the 71-yard burst that provided NU’s offense a jolt after a scoreless first quarter. “Really it was just finding space after that. When I saw it on the Jumbotron, it looked pretty hectic, but it felt good to me. That’s really all there is to it.

“Part of football is just playing ball at some points.”

Naturally, he took some grief for not capping off the run in the end zone.

“We were joking about it in the locker room in there. Maybe around the 35-yard line, I started doing the ‘Madden’ tricks where you start zig-zagging, hoping the guy loses track of you. I’ll definitely hear about it. Got caught at the 4.

"It was a nice play, but it would have been nicer if I scored.”

Martinez is doing plenty for Nebraska early in this season. He was asked to do even more against Buffalo as offensive playmakers continued to drop around him.

The three-time captain from Fresno, California, finished 13-of-19 passing for 242 yards and two touchdowns, and added 112 on the ground, becoming just the fifth player in Big Ten history to eclipse 6,000 yards passing and 2,000 rushing in the process.

“He’s a big-time player. He’s missing some weapons right now,” head coach Scott Frost said. “We had a lot of guys at that point that weren’t in the game. We should have scored more offensively than we did in the first half and didn’t, then got bailed out by a couple big plays that Adrian and Samori made in the first half.”

Nebraska's defense dominated early, holding the Bulls offense to four punts, a turnover on downs and a missed field goal at the halftime buzzer over their first six possessions. It bent a little in the second half but ultimately ran its streak to nearly seven quarters against Fordham and Buffalo without allowing a touchdown.

Erik Chinander’s group only looked shaky on the first drive of the game as UB steadily marched 33 yards over 11 plays and shot itself in the foot with two penalties.

From there, though, the Blackshirts didn’t allow much. Sophomore inside linebacker Luke Reimer made a heck of a play, flying to the flat to stop what looked like a sure first down on a fourth-down attempt in the middle of the field.

“That whole group, what a great performance by them,” Frost said. “They gave up a little here and there, but just didn’t quit the whole game against a good football team.”

The Huskers have now held seven straight opponents to less than 400 offensive yards and the defense has given up 30 points over NU's first three games.

Luke Reimer comes up with huge interception against Buffalo

When they got a stop with 92 seconds left in the half, NU at first sputtered trying to get its two-minute drill into gear.

That might well be understandable, too, considering the Huskers entered play without the services of tight end Travis Vokolek for the third straight game, wide receiver Oliver Martin for the second straight week and wide receiver Omar Manning's (left foot) first absence this season. Then, in the first half, tight end Austin Allen took a hard shot on the turf and left the game. Freshman receiver Zavier Betts went down later, too.

Instead, Ervin plowed forward for a first down, and then Martinez saw Toure, the senior Montana transfer and NU’s most reliable weapon, shake one-on-one coverage from his slot position. Martinez put the ball on Toure and he outran the Buffalo defense to the end zone for a 68-yard strike with 34 seconds left in the half.

“I knew (Toure) had to win," Martinez said. "I was getting everything I wanted to see from the front side of the play, turned and Samori was there. Let it rip."

“They gave those looks against Wagner and, in practice, when I would get that look, I would start smelling the end zone,” Toure added. “When we lined up, I kind of knew that, if everything went right, it was going to be a touchdown.”

Nebraska again struggled to establish consistent momentum with its offensive line and running backs — the stable of backs finished with 31 carries for 106 yards — though Ervin did eventually finish with 10 carries for 56 yards and two short scoring runs.

How much can the Huskers push their reliance on Martinez this fall? How many weapons will they have back at their disposal when they make the trip to Norman, Oklahoma, next weekend to face a formidable test?

On this day, NU had more than enough in its junior signal-caller and a stingy defense.

The Blackshirts, certainly, deserve their share of the credit. They held the Buffalo offense, which did not punt in its first outing against FCS Wagner, to 137 yards and 2.9 yards per carry on 19 attempts in the first half and to 135 on 33 carries overall.

Buffalo did convert half of its whopping 22 third-down tries, but NU got off the field twice on fourth down and didn’t allow a touchdown on either UB red zone trip.

Samori Touré has two long touchdowns in win over Buffalo

Over 83 snaps with the temperature soaring well past 100 degrees on the turf, Nebraska’s defense allowed 4.3 yards per play overall.

“We prepare for that,” captain and defensive tackle Damion Daniels said. “Every game is not going to be played perfect, but that’s on the Blackshirts. You’ve just got to be prepared.”

Veteran quarterback Kyle Vantrease attempted 17 passes for a modest 81 yards in the opening 30 minutes and the Huskers got big plays from a host of key contributors, including third-down TFLs from Daniels and outside linebacker Garrett Nelson to halt drives. Playing from behind and forced to air it out in the second half, Vantrease eventually put the ball in the air 50 times. He completed 27, but for just 224 yards (4.48 per attempt) and an interception.

It was Reimer who came away with the turnover, the exclamation point on his best day as a Husker.

The sophomore from North Star reached up and batted a Vantrease pass into the air while being blocked, picked it off and then returned it up the left sideline to the Buffalo 1-yard line. Ervin punched in his second short touchdown run of the day for a 21-3 lead with 14:47 remaining in the game.

Reimer finished with a game-high 16 tackles (seven solo) and two of the game-tilting plays.

Martinez and Toure, who at times felt like the lone remaining playmakers on offense for Nebraska on Saturday, hooked up again for a second 68-yard score in the fourth quarter to push the lead to its final margin.

Nebraska easily could have had more. Three scoring plays were wiped away due to penalties and senior kicker Connor Culp missed three field goals. They won’t be able to afford those miscues or the nine penalties for 71 yards or a fourth straight week with a major special teams mistake — Cam Taylor-Britt was charged with another fumble on a punt return late in the game — and expect to hang around next week.

In the end, NU is 2-1 overall and already looking south toward an old rival.

Nebraska shut down Buffalo's run game in a win on Saturday.

Nebraska's Adrian Martinez runs for yardage against Buffalo on Saturday at Memorial Stadium.

Nebraska defensive lineman Damion Daniels (93) celebrates a tackle for a loss in the second quarter against Buffalo on Sept. 11 at Memorial Stadium.

Nebraska wide receiver Samori Toure (3) catches a pass from Adrian Martinez before scoring in the fourth quarter against Buffalo's Marcus Fuqua on Saturday at Memorial Stadium.