Another loss to Creighton, and an uncertain future as Huskers fall to Bluejays at PBA
0 Comments
Share this
{{featured_button_text}}
CHRIS BASNETT Lincoln Journal Star

It was the same old story.

And Creighton had the right author.

The Bluejays blitzed the Nebraska men's basketball team in the game's first 10 minutes with the kind of run that has become commonplace for them in this series, then withstood a rousing Husker charge to end the half before keeping NU at arm's length the rest of the way in a 77-69 victory Tuesday at Pinnacle Bank Arena.

10 social media reactions to the Huskers' loss to Creighton

Less than 10 minutes in, in front of a PBA crowd of 15,939 that ranks as the 10th-largest in the building's history, Creighton led 29-10 as boos began to rain down from the seats after another empty Nebraska offensive possession.

It was a 28-5 run over just more than eight minutes for the Jays (3-0), powered by a pair of 13-0 spurts that sucked the life out of the building. And it started with Creighton's transition game, something the Huskers harped on while preparing for the Bluejays, NU coach Fred Hoiberg said.

"We lost that game in the first five minutes. They got anything they wanted in transition," Hoiberg said.

This was the same Creighton team that had scored 55 points and gone 1-for-19 from three-point range in its last game. But against a Nebraska team that began the game still in search of the potent offense many expected in the preseason, the Jays could do no wrong.

It was the Jays' 10th win in the last 11 meetings between the programs.

And it was powered by freshman point guard Ryan Nembhard, who scored 22 points, grabbed five rebounds and handed out five assists in his first road game as a college player.

CU's point guard play "was everything," Creighton coach Greg McDermott said, shining a light on the biggest difference between the programs at this point in the season. "Ryan's a special player. He controls the tempo of the game for us. He's going to make me a pretty good coach."

NU's only life came after it trailed by 19. Senior guard Kobe Webster entered for his first action of the season, hit a shot on his first possession, and sparked a Nebraska rally that got the Huskers back within a point with a minute still to play in the opening half.

That was as close as Nebraska could get.

"I know what I'm capable of. Coach has confidence in me; he had confidence to put me in the game," Webster said. "I'm not going to harp on any individual stats, but the goal is to win. I'm glad I was able to provide a spark, but I wanted to get a win."

Nebraska (1-2) missed a go-ahead three-pointer in the final minute of the first half, a go-ahead layup while trailing 44-43 with about 16 minutes left, and missed another layup that would have cut the deficit to one a short time later. All three times Creighton scored on the other end, either at the free-throw line or by executing its offense.

Nebraska played the last 29 minutes of the game without Trey McGowens, who went to the bench with 8:45 left in the first half and didn't return. McGowens appeared on the NU sideline a couple of minutes into the second half using crutches and wearing a walking boot on his right foot.

Hoiberg said after the game McGowens broke the fifth metatarsal in his right foot after landing wrong. The guard will meet with NU's physicians and trainers Wednesday to determine the next steps and a timeline for recovery.

Watch now: After big game, Webster says, 'I know what I am capable of'

"Devastating news for the heart and soul of our team," Hoiberg said. "Just heartbreaking for a guy who has come in here and bought into his role. He's our best leader; uses his voice every day in practice.

"Just a really tough loss. I really feel for him."

Ryan Hawkins scored 13 of his 15 points in the second half for Creighton, while Alex O'Connell had 11 of his 13 in the first half.

Webster finished with 20 points for Nebraska, going 8-for-11 from the field with two assists and two steals. C.J. Wilcher scored 15 for the Huskers, adding four rebounds.

Alonzo Verge finished with 10 points, five rebounds and four assists, doing much of his work after halftime. Verge was benched for the final 12 minutes of the first half as Webster led NU's rally.

The Huskers now face, at best, an uncertain next few weeks with an unsettled point guard situation and the McGowens injury.

And another year of waiting, again, to beat the Bluejays.

"We've got to stay together. We can't do anything about what has happened in the early part of the season," Hoiberg said. "Not one guy is going to replace Trey. It's going to be about finding a way to pull together, getting everybody to pick it up, and continuing to learn." 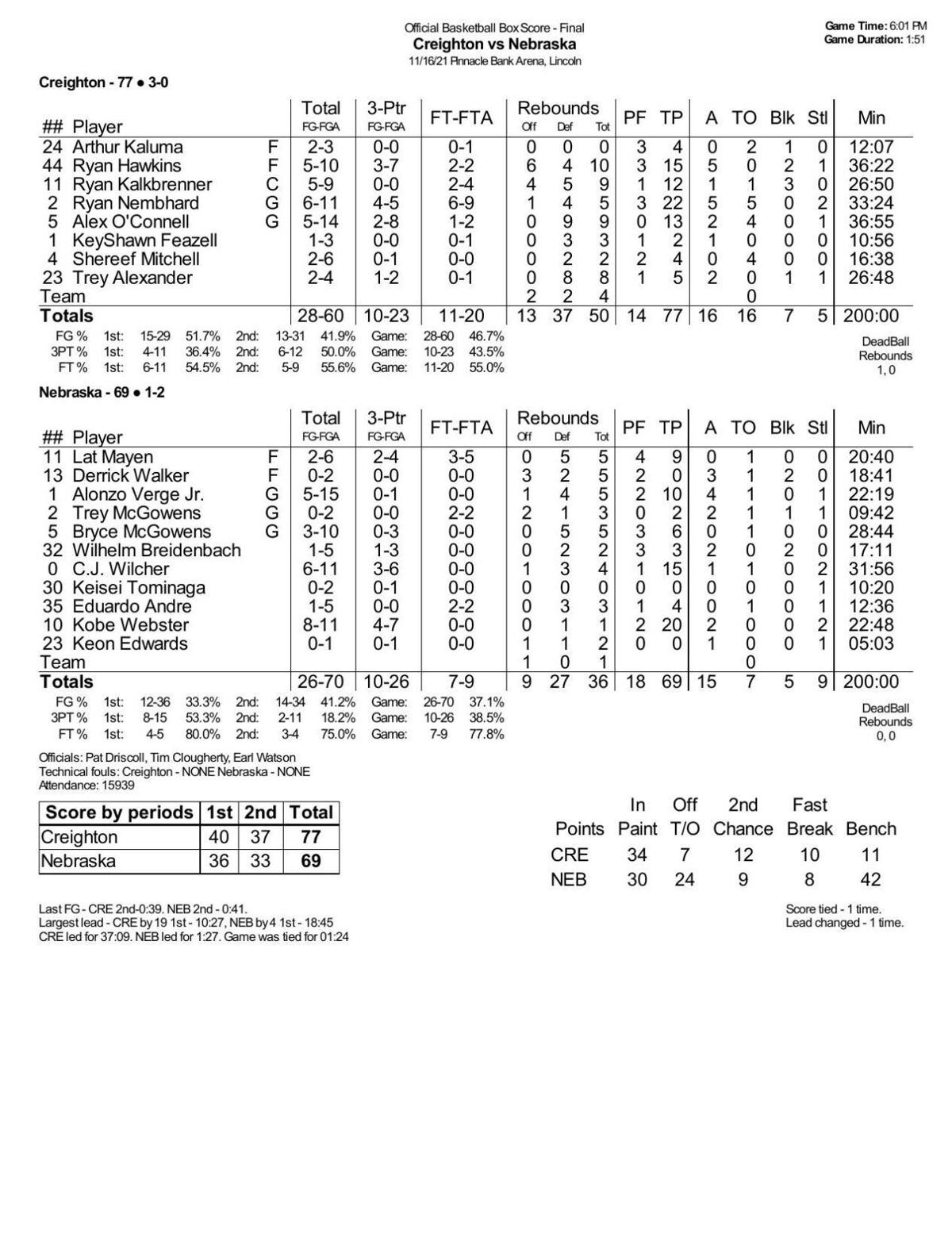 Doin' what he does best 👌@k10webster hit the ground running for @HuskerHoops making it a 1-point game pic.twitter.com/wDL1dpUxlu 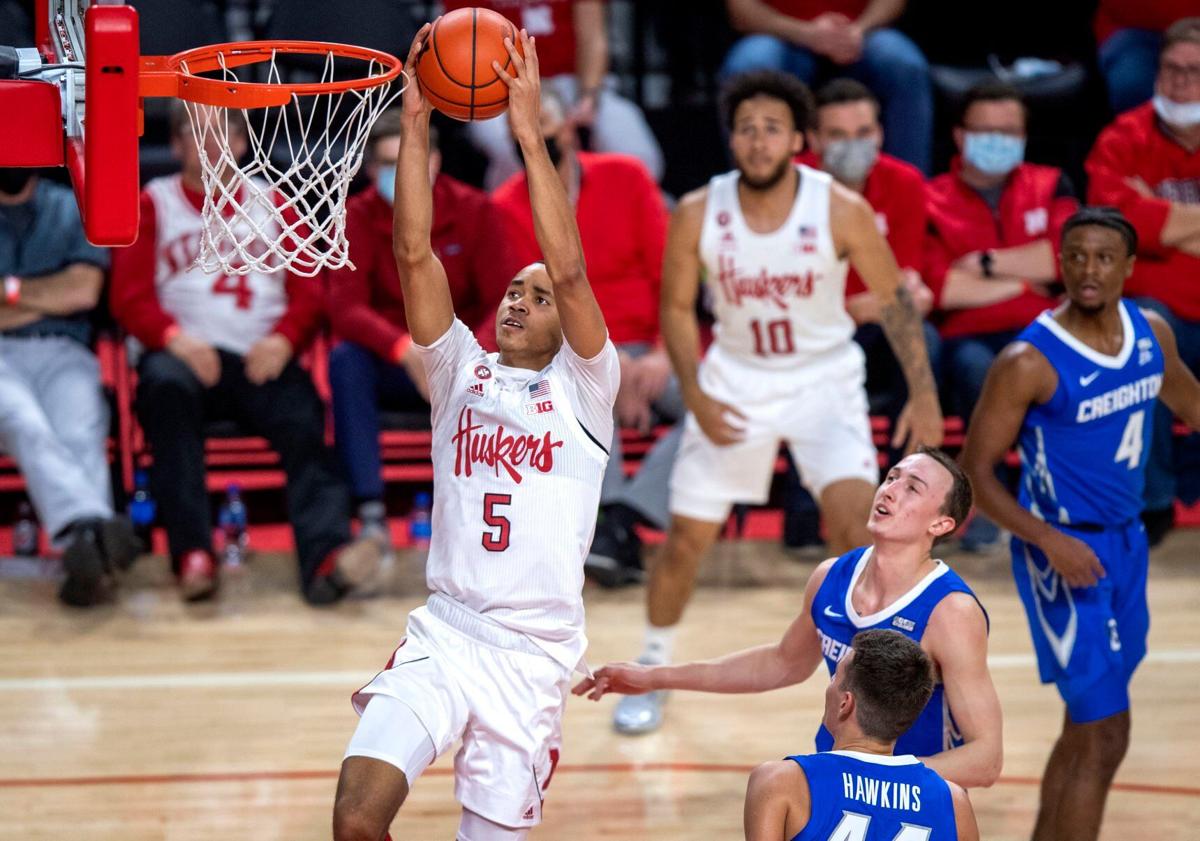 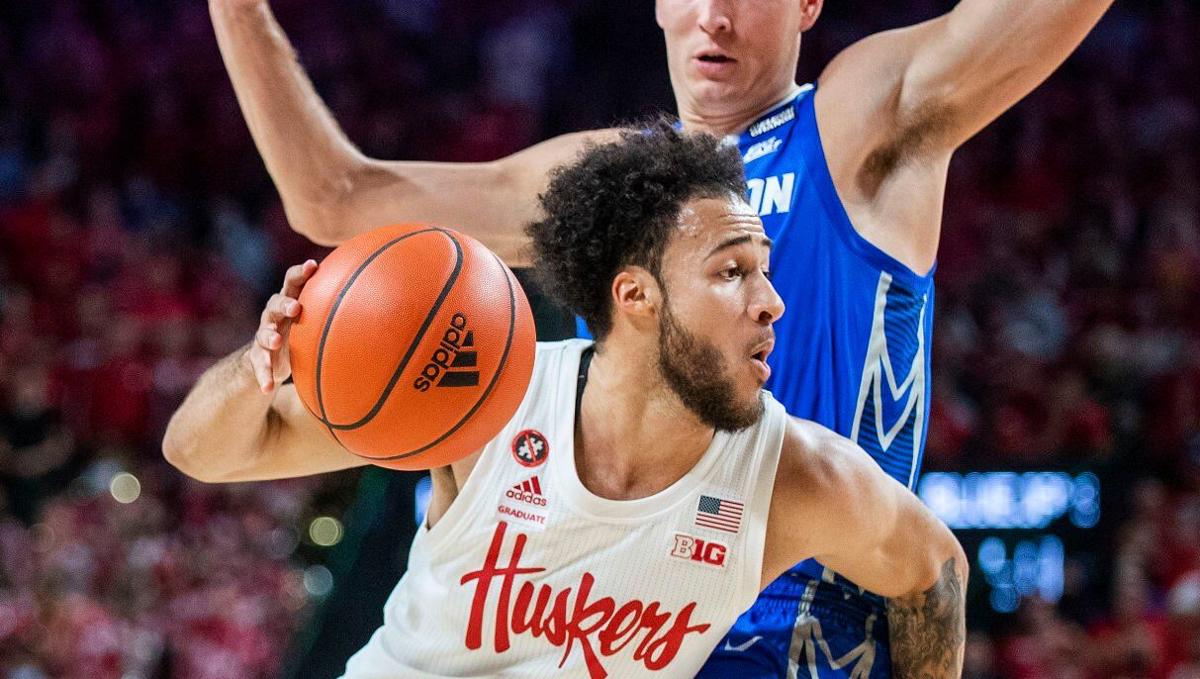 Nebraska’s Kobe Webster drives to the basket against Creighton's Ryan Hawkins in the second half Tuesday at Pinnacle Bank Arena. 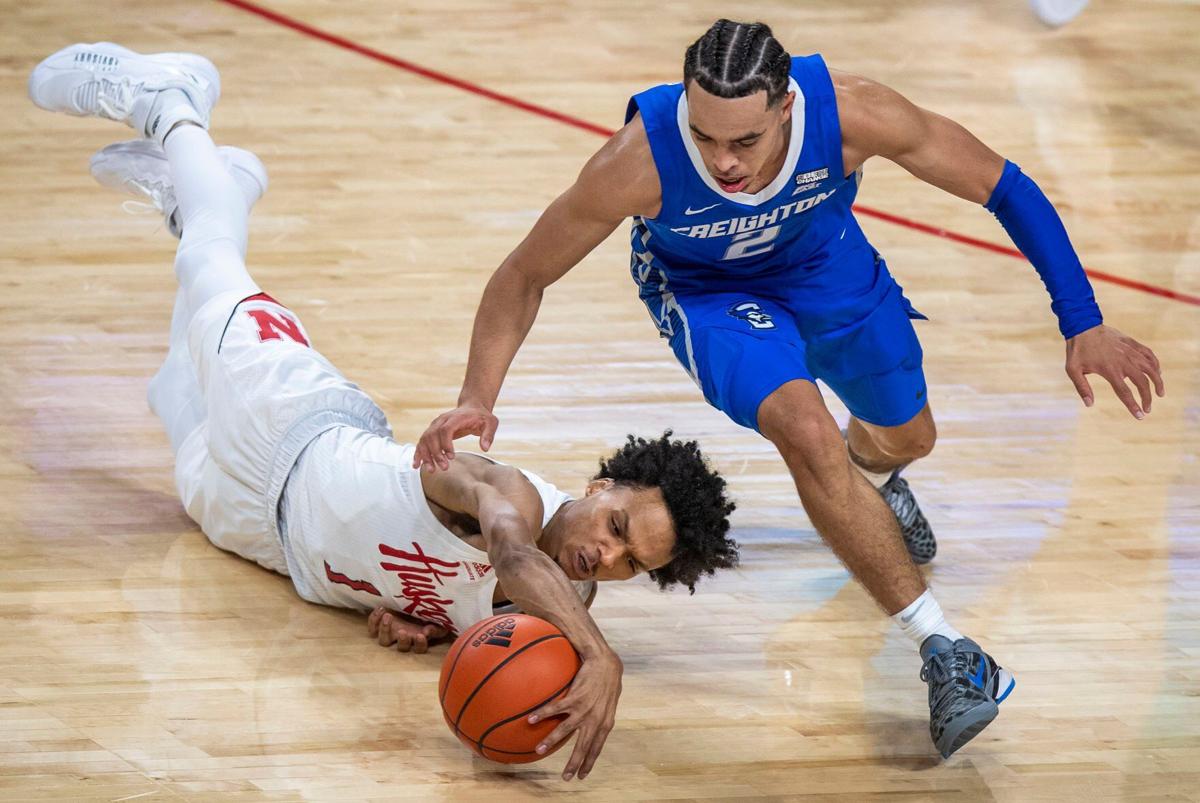 Nebraska’s Alonzo Verge (1) hustles for the loose ball against Creighton's Ryan Nembhard in the first half Tuesday at Pinnacle Bank Arena. 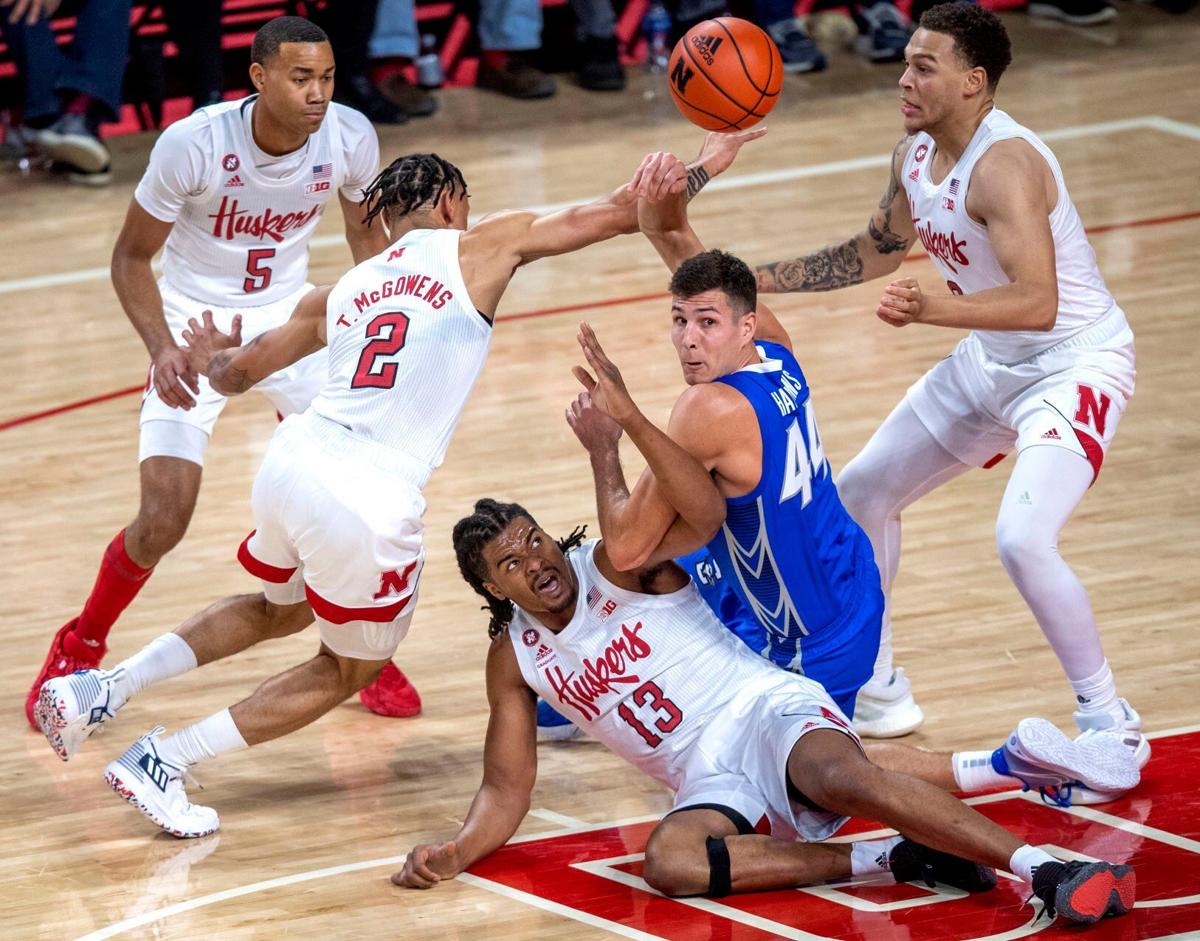 Surrounded by Nebraska's Bryce McGowens (5), Trey McGowens (2), Derrick Walker (13) and C.J. Wilcher, Creighton's Ryan Hawkins dishes a pass to a teammate for a basket in the first half Tuesday at Pinnacle Bank Arena.