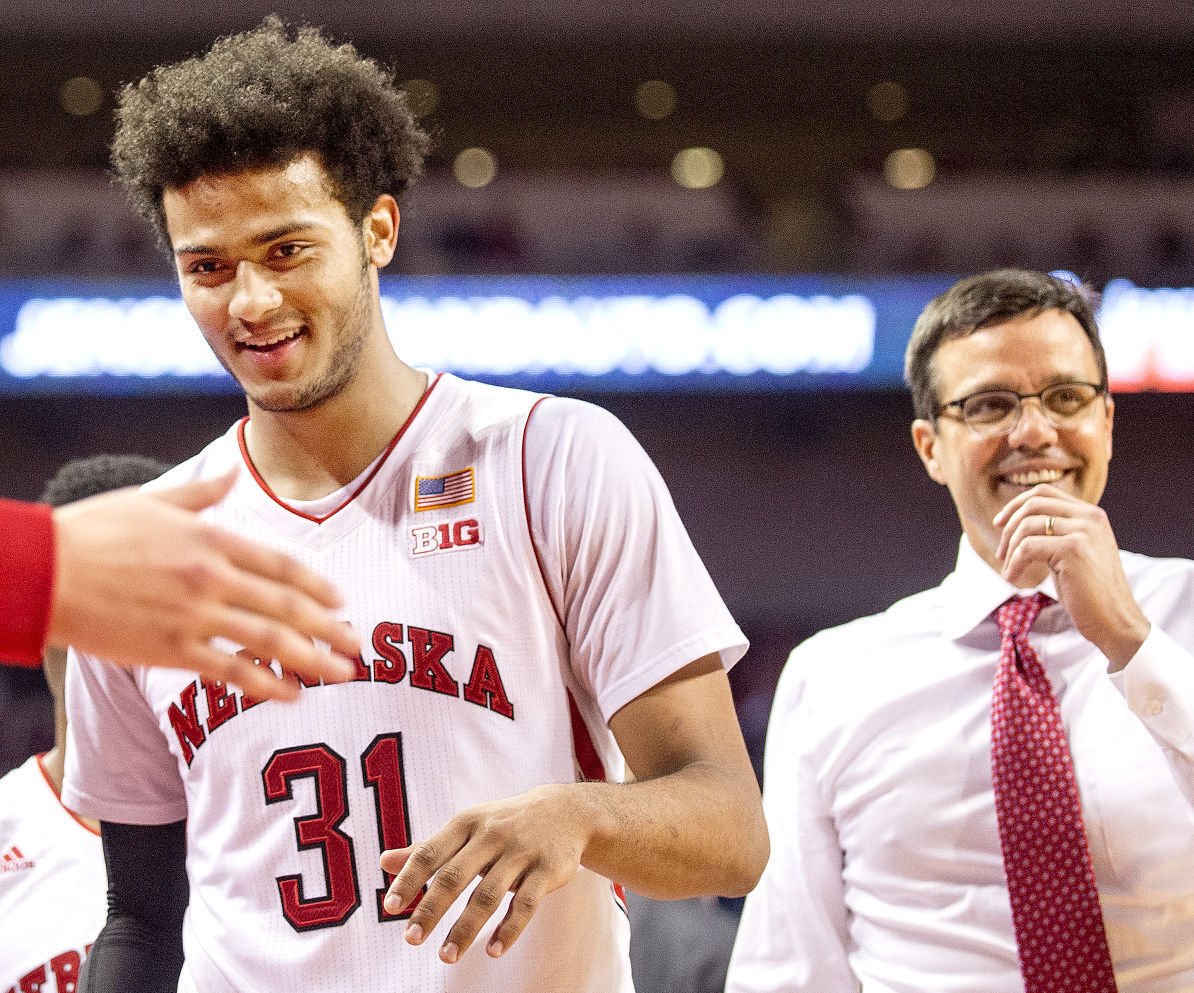 Nebraska guard Shavon Shields Tim Miles enjoy a light moment during a game against Minnesota earlier this season. Shields, who has started 106 straight games, will miss Wednesday's game at Wisconsin. 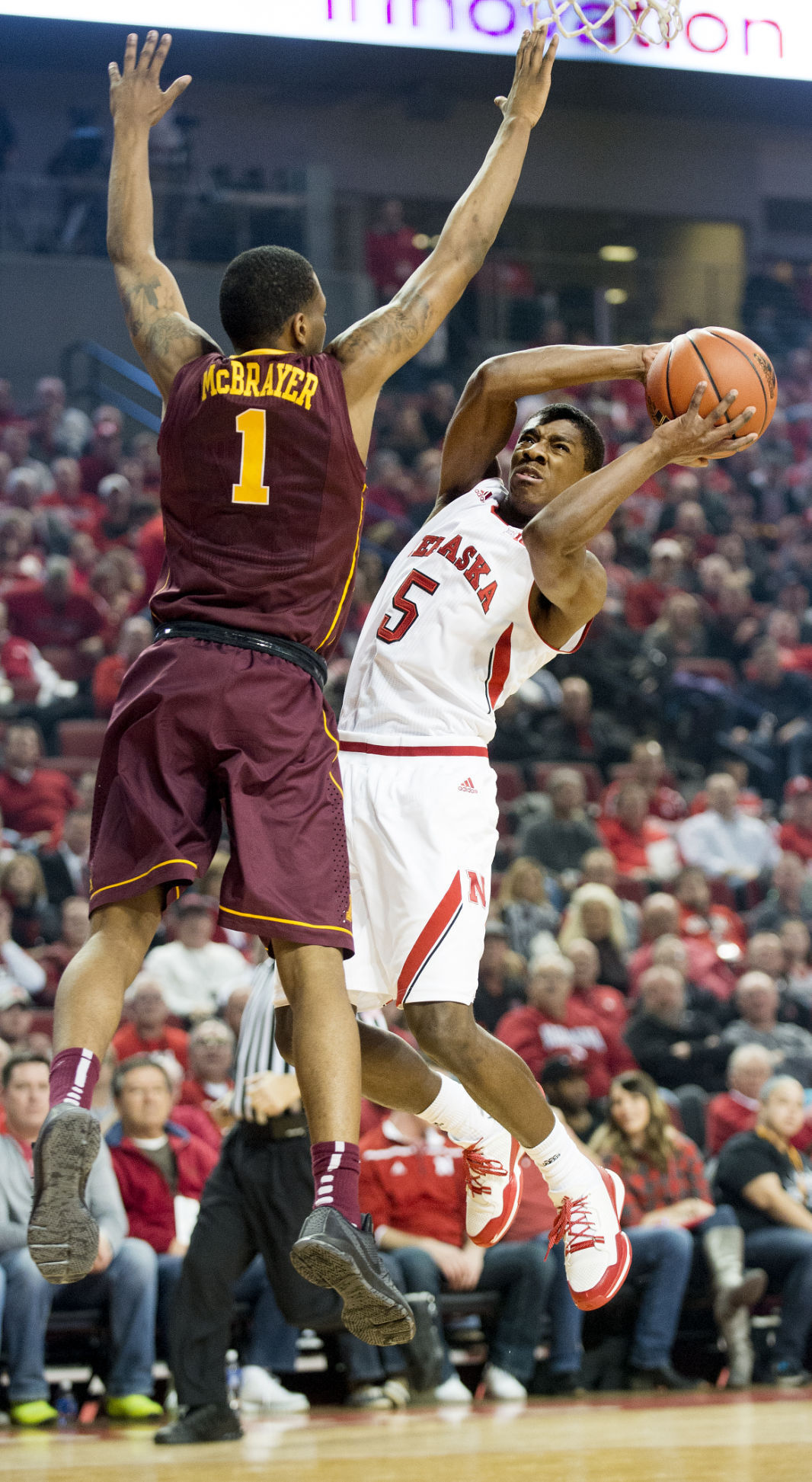 Nobody’s declaring a sudden, dramatic turnaround for the Nebraska men’s basketball team based on consecutive blowouts against arguably two of the worst-looking conference opponents the Huskers have faced in decades.

Yet to say Nebraska (10-8, 2-3 Big Ten Conference) hasn’t made any progress since its 0-3 start to conference play isn’t fair, or correct, either.

Specifically, freshman point guard Glynn Watson said, team defense has improved. Players are better positioned to rotate and are more often than not in the right spots to make correct decisions.

To wit: The Huskers have held Iowa, Rutgers and Minnesota to combined 39 percent shooting, after Northwestern and Indiana shot 52 percent from the field.

“Everybody’s on the same page, both defensively and offensively,” Watson said. “We’re executing our plays, and on defense, everybody’s in the right spot. Even though Minnesota and Rutgers weren’t great teams, we were still in our right spots, and that’s going to help us in the long run, just being together.”

Still, many wonder exactly how far a young Nebraska team has grown only five games into conference play.

Saturday’s game at Illinois (9-8, 1-3) should provide a fair assessment, given the Illini are a near mirror image of the Huskers.

Both teams are relying on youth, are void of big men and boast a dynamic scoring duo.

“Malcolm Hill and Kendrick Nunn, those are two guys who can single-handedly beat you,” Nebraska coach Tim Miles said. “We’re really going to have to keep an eye on them.”

Illinois and Nebraska also lead the Big Ten with the most minutes played this season by newcomers. Illinois’ seven newcomers have accounted for 54.4 percent of minutes played, while Nebraska’s nine have played 50.5 percent of its minutes.

Nebraska won’t complain about such a depleted frontcourt, although Illinois' 6-foot-10 freshman Michael Finke can stretch the floor. He’s shooting 41 percent on three-pointers on a team that’s otherwise guard-heavy and will spread the floor five-out, something that concerns Miles.

“You can’t go out and let them make 10 threes and expect to win, I don’t think,” Miles said. “The biggest key for me is not getting so spread out where we start fouling. You can’t put them on the foul line 25, 30 times, plus give them six or seven, eight threes, and expect to win on the road.”

Miles said he’ll go with his normal lineup but could also counter with his three-guard lineup of Watson, Tai Webster and Benny Parker.

Parker battled a stomach bug while playing Tuesday against Minnesota, and Miles said a virus kept two players out of Thursday’s practice and sidelined another midway through the workout.

Illinois has had the week off since upsetting then-No. 20 Purdue on Sunday. Defensively, the Illini like to pressure and will force turnovers, but they also rank No. 308 nationally in field goal-percentage defense, at 46 percent.

Men's basketball: Morrow easing up in weight room to help his lift

Nebraska basketball coaches have recently had to kick Ed Morrow out of the weight room.

For the first time since 1971, the Nebraska men's basketball team has won back-to-back conference games by at least 20 points after Tuesday's 84-59 drubbing of the Gophers.

1. Wisconsin has won 13 straight home games against unranked Big Ten teams, and after suffering four Big Ten losses by an average of 3.8 points, the Badgers have started winning some close games. Overall, they've played eight games decided by three points or fewer, the second most in the nation. According to ESPN.com, Wisconsin has faced the ninth-toughest schedule in the nation, with four top-50 RPI victories.

Nebraska guard Shavon Shields Tim Miles enjoy a light moment during a game against Minnesota earlier this season. Shields, who has started 106 straight games, will miss Wednesday's game at Wisconsin.