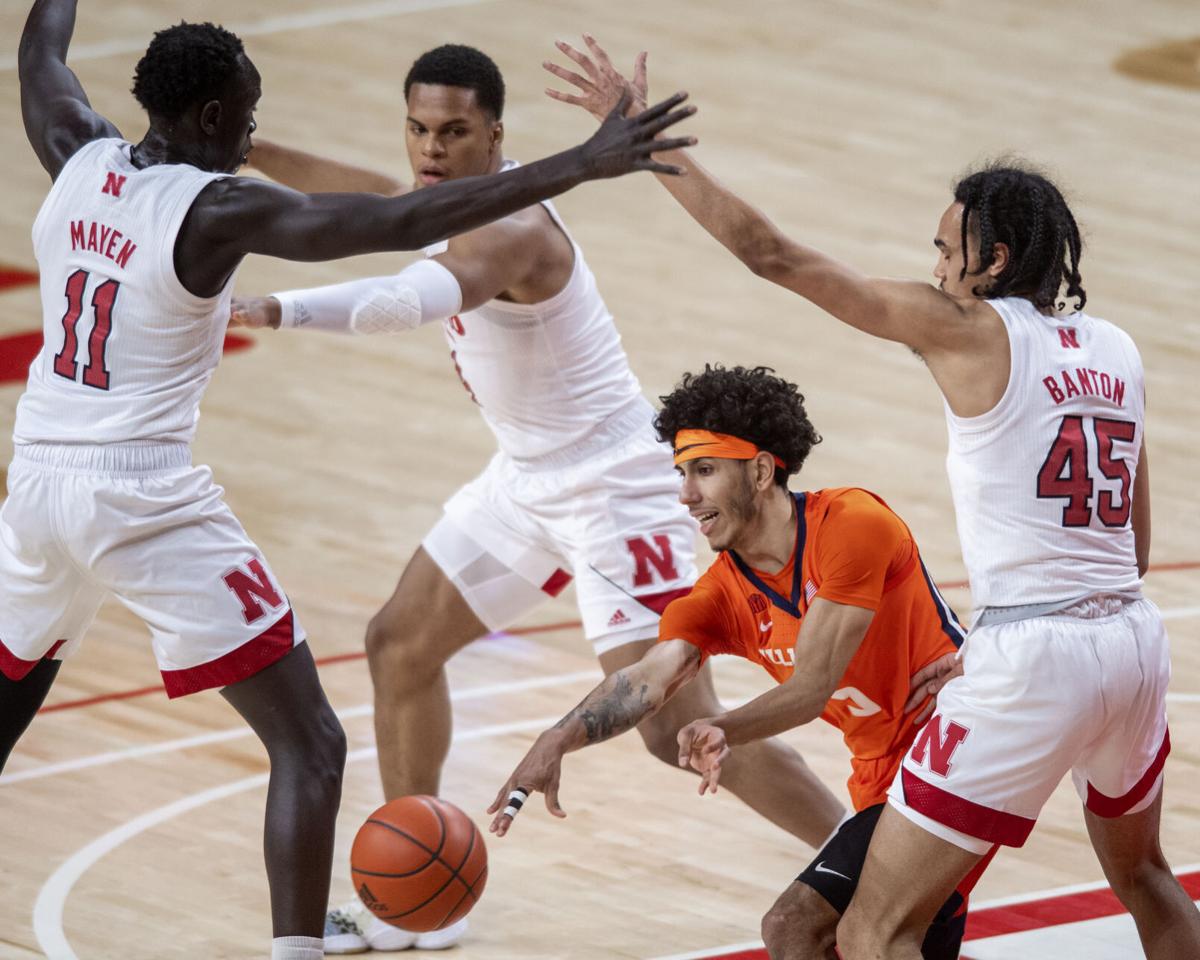 Illinois’ Andre Curbelo (5) passes to a teammate as he's swarmed by Nebraska guard Dalano Banton (45), Shamiel Stevenson (4) and Lat Mayen (11) during the first half Friday at Pinnacle Bank Arena. 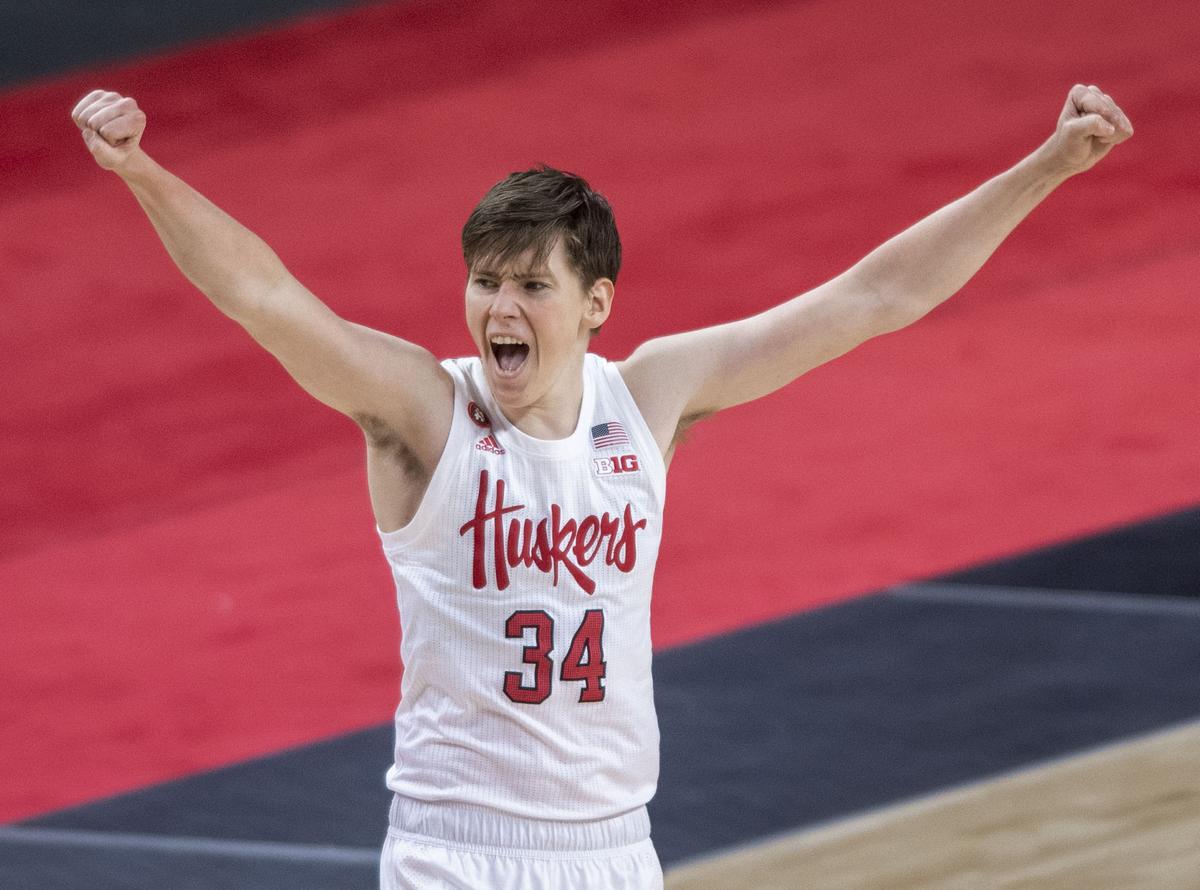 Nebraska guard Thorir Thorbjarnarson celebrates a three-pointer by teammate Shamiel Stevenson (not pictured) against Illinois during the first half Friday at Pinnacle Bank Arena. 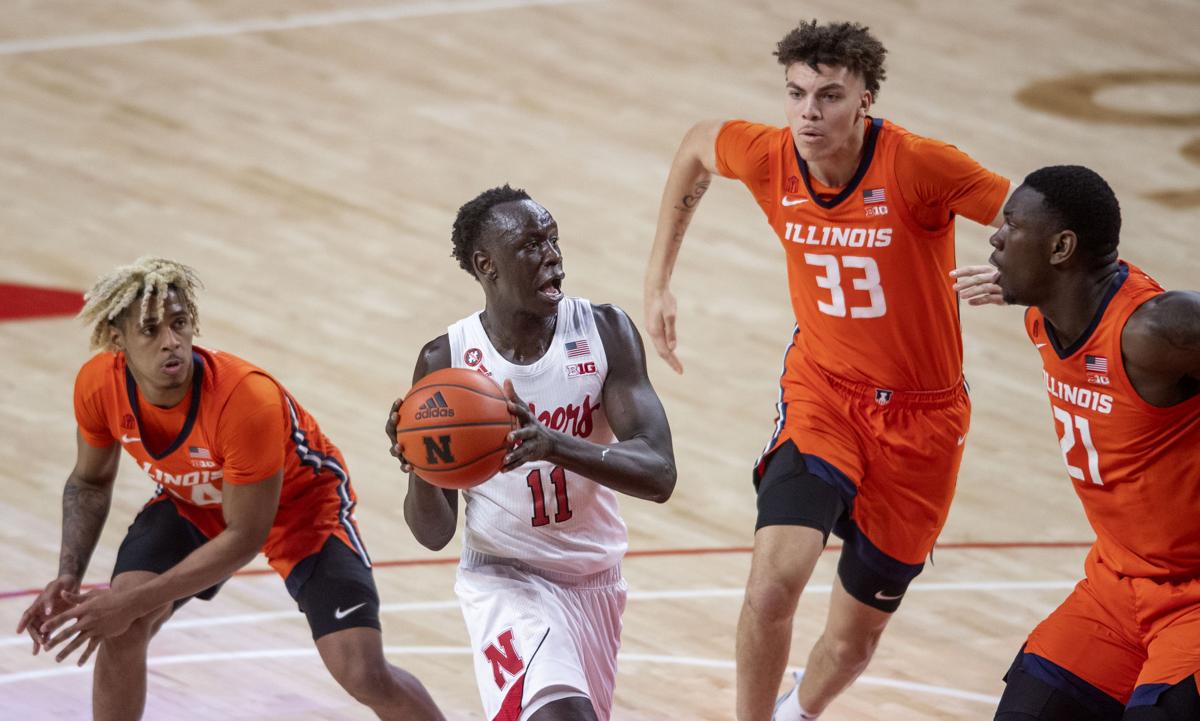 Nebraska's Lat Mayen (11) drives to the basket against Illinois’ Adam Miller (left), Coleman Hawkins (33) and Kofi Cockburn during the second half Friday at Pinnacle Bank Arena.

As the cold night grew darker in Lincoln, the Nebraska men’s basketball team may have found a glimmer of light.

And while that light was eventually snuffed by an All-American performance from Illinois guard Ayo Dosunmu and some frustrating late-game offensive execution, perhaps the Huskers discovered a way forward as this meat grinder of a season pushes on.

The Huskers were trading punches with No. 6 Illinois on Friday night, pushing the Illini and their uber-talented roster deep into the second half at Pinnacle Bank Arena.

In search of answers on offense, Huskers may throttle back on one of nation's fastest tempos

And with 16 seconds left in regulation, Nebraska had the ball in a tie game with a chance to win.

But a disjointed possession ended with NU not even getting off a shot, and the Huskers went 0-for-5 from the field in overtime as Illinois escaped Pinnacle Bank Arena with a 77-72 win.

Dosunmu was brilliant, scoring 24 of his 31 points after halftime. He had Illinois' final 10 points of regulation, its first five of overtime and hit a dagger jumper with 15 seconds left in the extra period to give the Illini a five-point lead.

That it even got to that point goes back to the frustrations that have hindered NU all season.

Coming out of a timeout, Nebraska didn't throw a single pass on its final possession of regulation before Trey McGowens had to force up an off-balance shot from 25 feet under heavy pressure.

Nebraska coach Fred Hoiberg slammed his mask to the court in frustration after the play as the buzzer sounded. That would turn out to be NU's last, best chance of pulling an upset and ending its 25-game Big Ten losing streak.

Instead, the number grew to 26.

"This has been an incredibly difficult stretch for everybody involved," Hoiberg said. "And for those guys to go out there sore, beat up, on this losing streak, and find a way to muster up the energy to go out and compete the way they are, I give our guys all the credit in the world for that."

"But the lack of execution on that last play is extremely disappointing. To draw something up that we think could have at least gotten us a good look to win a game like this ... That's the hard thing. That's going to be the one that certainly will keep me up tonight."

NU (4-12, 0-9 Big Ten) showed no fear against Dosunmu, Kofi Cockburn, and the rest, using a 12-2 run midway through the second half to open up a five-point lead.

Once again Nebraska bolted out of the gate, scoring the game’s first nine points. Mayen had the first seven, and a tough Derrick Walker layup over Cockburn forced an Illinois timeout in which Brad Underwood lit into his team.

The Illini answered by hitting a trio of three-pointers, only to see NU counter with three threes of its own from a couple of unlikely sources.

Thorbjarnarson, who was 1-for-11 from downtown in Big Ten play, first hit a step-back three, then splashed another on Nebraska’s next possession to push the lead to 20-14.

Shamiel Stevenson, who was 1-for-17 from long range on the season, drilled one from the corner.

Those buckets, along with a 5-for-5 performance at the free-throw line from the nation’s 331st-ranked foul-shooting team, helped the Huskers build a 32-24 lead with 3:15 left in the half.

Then NU wobbled. Dosunmu hit a putback and drew a foul. After he missed the free throw, Cockburn grabbed the rebound and scored.

Cockburn had three more free throws and a dunk to end the half as the Illini outscored Nebraska 9-2 over the final 3:15.

Nebraska only avoided total disaster when Trent Frazier’s three-pointer at the buzzer went in and out.

NU’s 34-33 lead at the half was its first halftime lead in a Big Ten game this season.

Mayen led the Huskers with 16 points while McGowens and Allen each scored 15. Allen added eight rebounds.

Cockburn had 21 points and 13 rebounds for Illinois, muscling his way to the rim against a game-but-outsized Walker much of the night.

There will be little time for reflection. Nebraska will now get on a plane Saturday morning and fly to Penn State, where it will face the Nittany Lions on Sunday afternoon.

The Huskers will still be tired, still be sore, still be searching for something to get themselves over the hump. But perhaps that something doesn't seem quite as far away as it did two weeks ago. 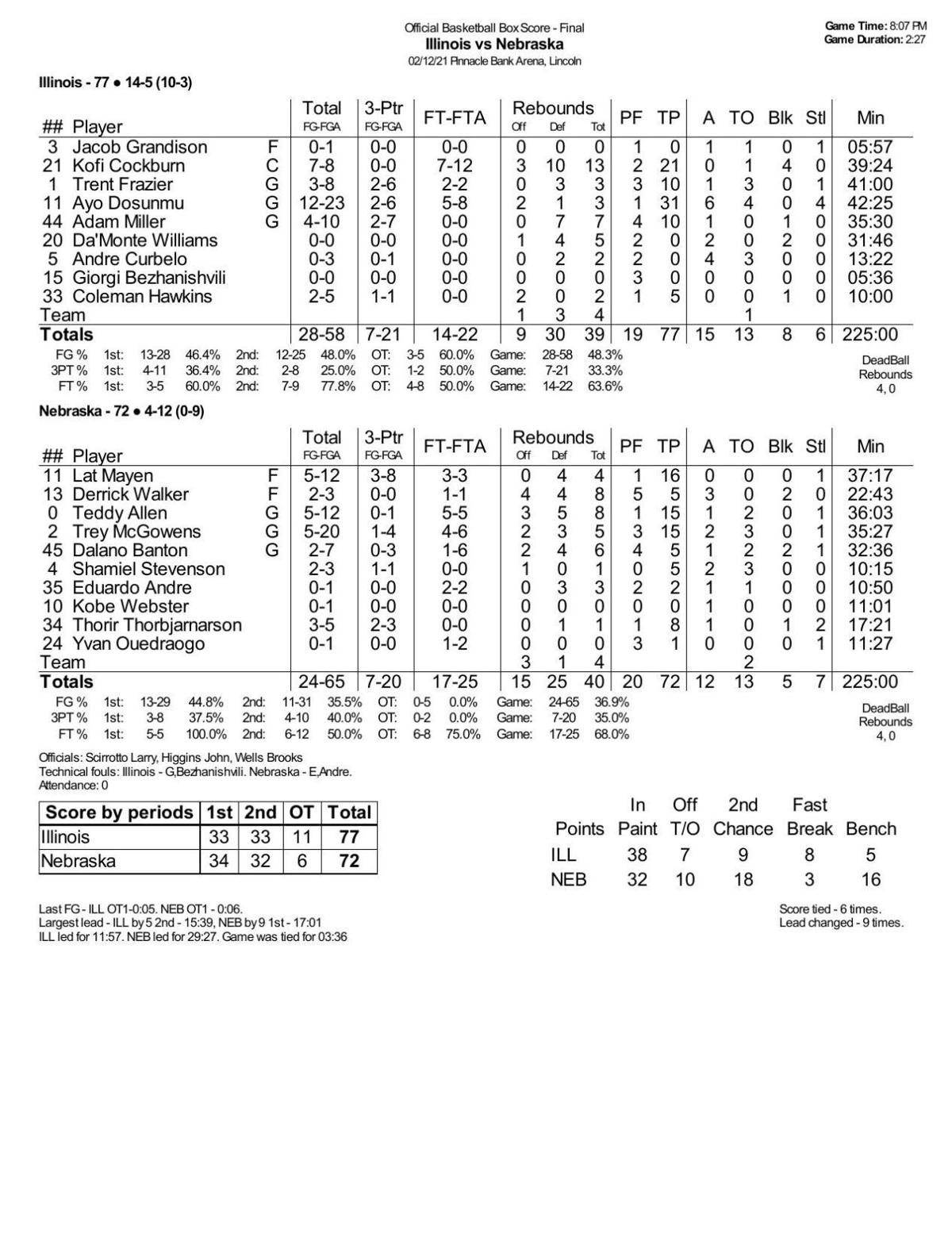 Photos: Nebraska takes No. 6 Illinois to overtime but falls 77-72

Two-Minute Drill: After watching a full practice, here's what stood out to us

The NCAA made a landmark decision in passing a one-time transfer exception uniform across all of college sports. Fred Hoiberg weighs in.

C.J. Wilcher and Oleg Kojenets signed their national letters of intent Wednesday — and their new coach gives an idea of what to expect from them.

At 6-foot-8 and 185 pounds, Keon Edwards slots as a two-guard or small forward and fits the mold of the multidimensional threat NU coach Fred Hoiberg wants in his system.

Illinois’ Andre Curbelo (5) passes to a teammate as he's swarmed by Nebraska guard Dalano Banton (45), Shamiel Stevenson (4) and Lat Mayen (11) during the first half Friday at Pinnacle Bank Arena.

Nebraska guard Thorir Thorbjarnarson celebrates a three-pointer by teammate Shamiel Stevenson (not pictured) against Illinois during the first half Friday at Pinnacle Bank Arena.

Nebraska's Lat Mayen (11) drives to the basket against Illinois’ Adam Miller (left), Coleman Hawkins (33) and Kofi Cockburn during the second half Friday at Pinnacle Bank Arena.