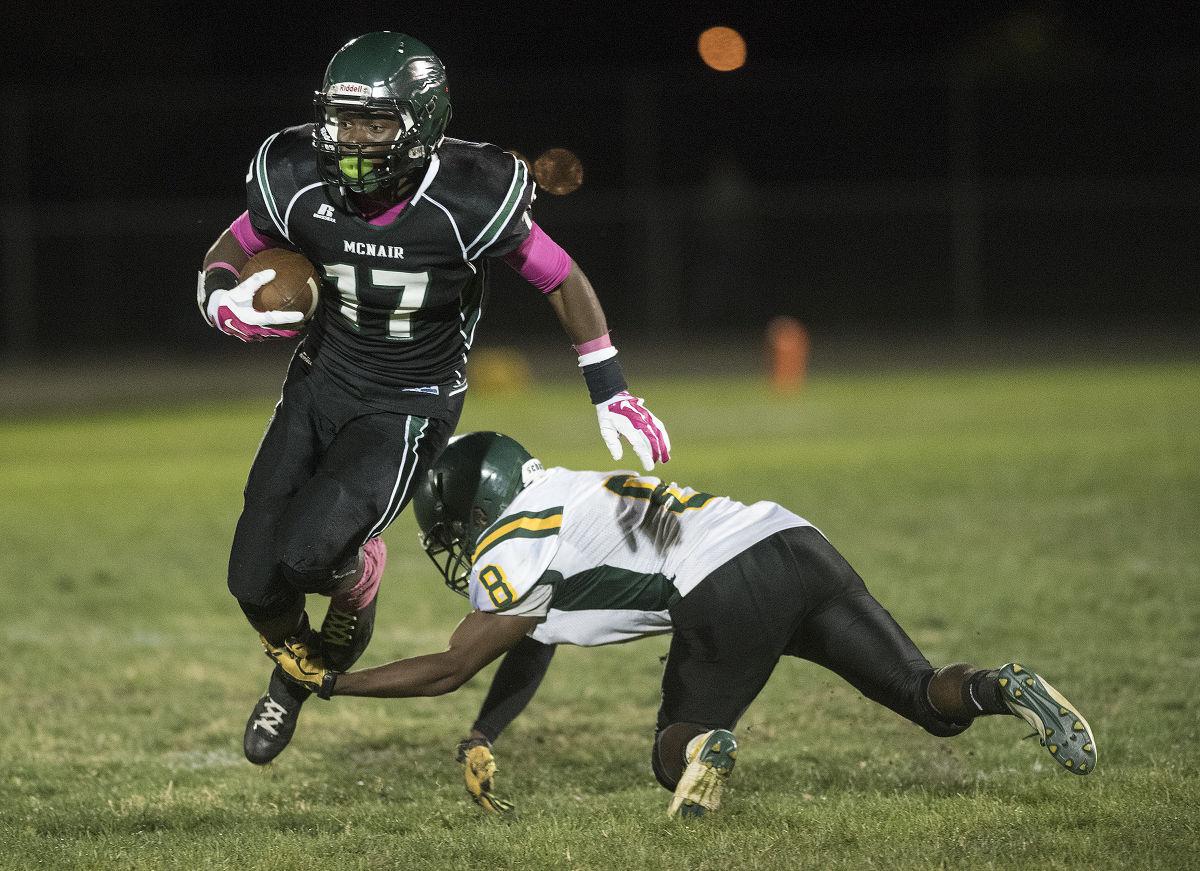 Derrion Grim of McNair High (Calif.) takes off on a touchdown this past season, one of his 37. Grim, a receiver, is an early enrollee in the 2016 Nebraska recruiting class. 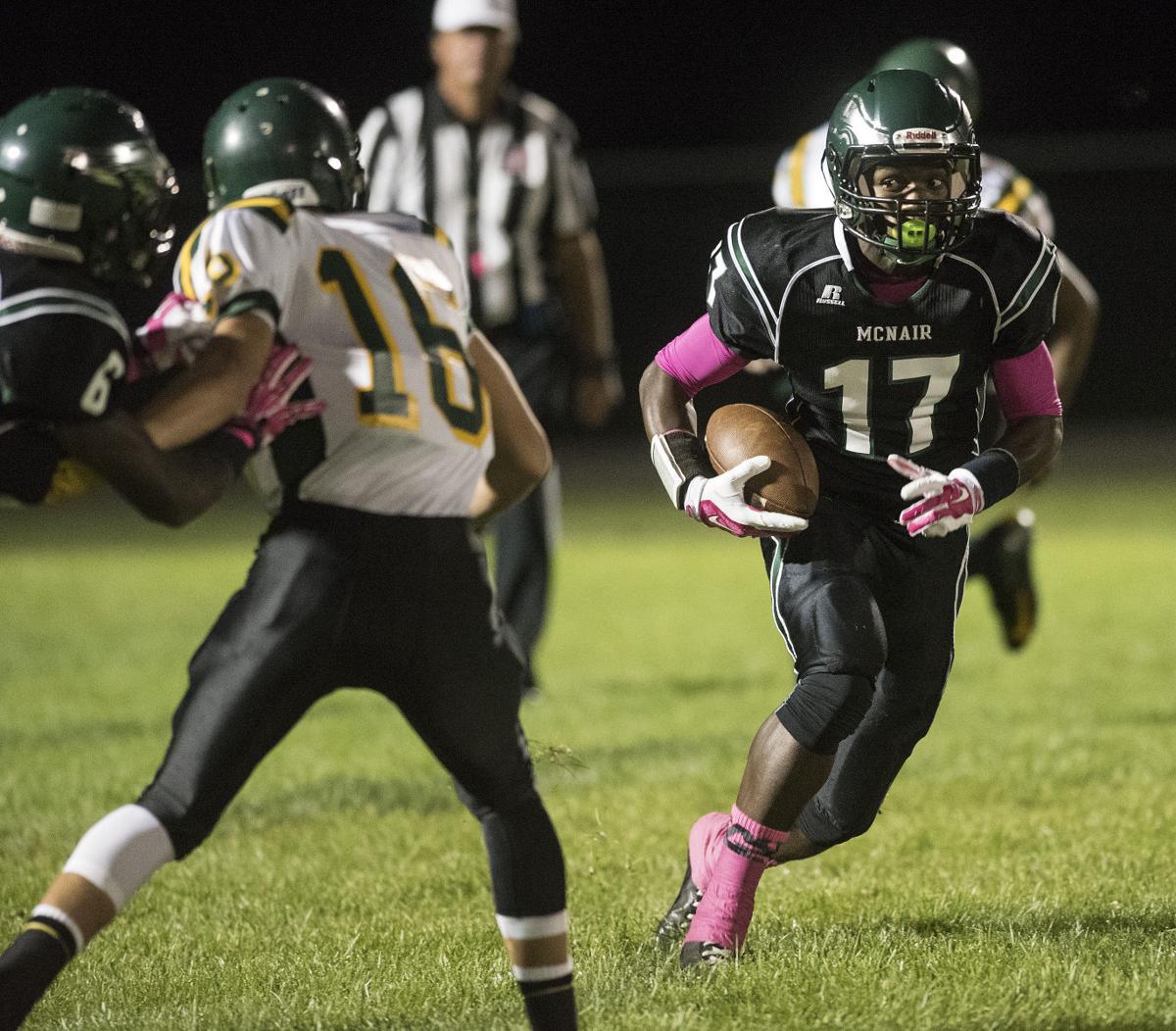 Derrion Grim of McNair High (Calif.) looks for running room after making a catch against Franklin High this past season. Grim, a receiver, is an early enrollee in the 2016 Nebraska recruiting class. 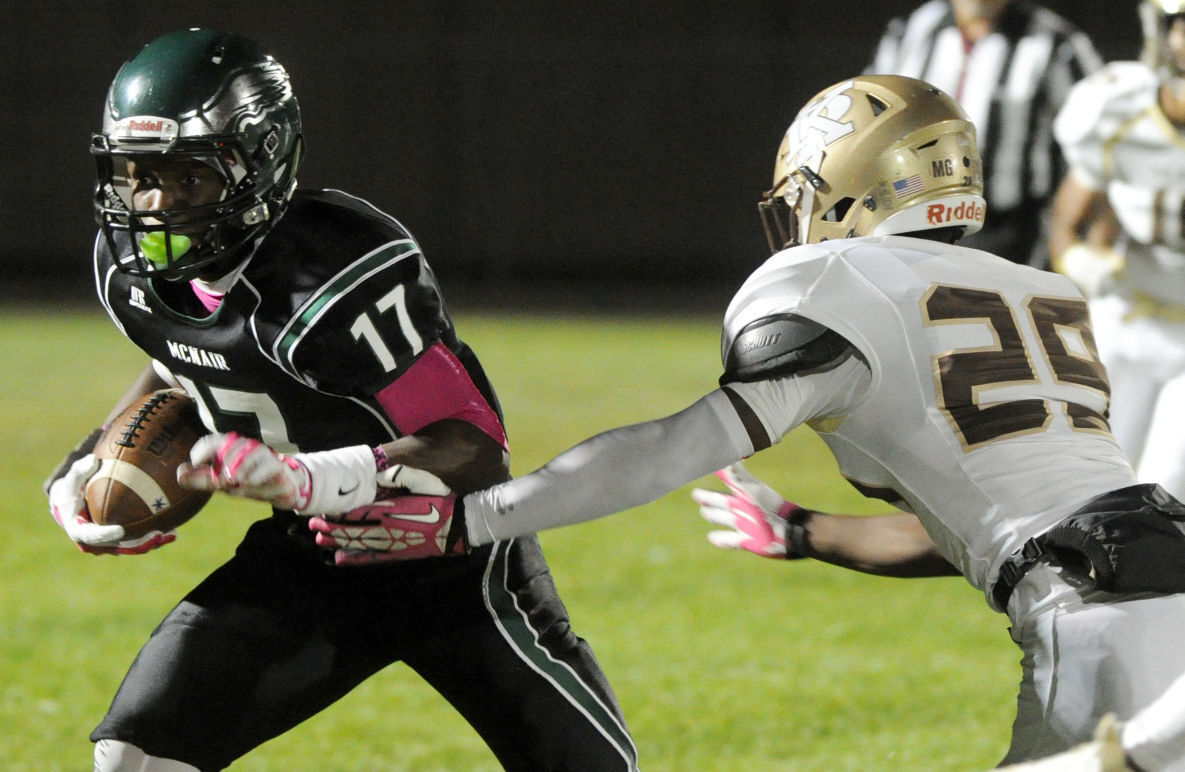 Wide receiver Derrion Grim is trying to make his case this spring as one of two Husker enrollees already practicing with the team.

That's what happens when you score 37 touchdowns and have 1,928 yards receiving in one football season. If you want the entire truth of it, Derrion Grim wanted 2,000 yards because, hey, there's always more for the driven.

"You could see Derrion after a grueling 2½-hour practice, and he'd go run the stairs by himself," said Terrance Hampton, his high school head coach. "He took the initiative to go above and beyond what the normal player was doing and that's what separated him."

Listen to the voices of those who have watched Grim grow into the record-setting player he became and you start to get an idea as to why the Husker wide receiver recruit, who tied the state record in California for receiving touchdowns in a season with 34 in just 10 games, is such big deal in his hometown of Stockton.

It's tough to leave home, but sometimes required to chase something bigger. That's what Grim is doing this week, with plans to arrive in Lincoln on Friday as an early enrollee in the 2016 Husker recruiting class.

Those are two important pieces in a recruiting class that Mike Riley and staff hope help this program distance itself from a 6-7 season.

Grim doesn't bat an eye about that record in Year One of the Riley era.

"I was just thinking: new coaches, new offense, everybody's still getting acclimated, that's why they were in close games," Grim said. "I know next year will be a lot better year."

Few recruits will ever have as good a year as Grim did in 2015.

The thing is, those ridiculous numbers didn't even surprise Hampton that much. He'd watch in practices as Grim would stop on a dime and leave a defender in his dust.

And he'd think about the time Grim showed up to McNair High School as a freshman. The coach had known Grim's father, his offensive coordinator and a former star receiver himself, for about 25 years. So he'd watched Derrion grow up. He'd see him at church on Sundays.

But now he was about to coach him. Hampton reached out to shake his hand. He still remembers what came next. "He looked me in the eye like a young man."

As for the football skills, that's in the genes. Derrion's father, LaTef Grim, played college ball at Pitt and even scored a touchdown in an NFL preseason game for Washington before an injury hampered his chances at the next level.

In addition to being the offensive coordinator at McNair High where Derrion starred, he's also a trainer.

LaTef didn't take it any easier on Derrion because they shared the same last name. On the field, it was all business.

"He's a tough coach, and if you can't handle it, you'll break under fire," Hampton said. "So Derrion was able to endure and take the teachings and run with it. You wouldn't even known they were father-son."

Oh, but Dad was plenty proud.

LaTef said he started to realize his son could play big-time ball at the college level during his sophomore year of high school. He saw a change in mentality. Derrion wanted the ball. "I said, 'Now you're starting to turn into a receiver. A real receiver wants the ball at all times.'"

He also makes plays when the game is in the balance. That's what the 5-foot-11, 190-pound receiver did against Chavez High, his team trailing 48-45 with less than 10 seconds left. The end zone was 31 yards away. LaTef called … a screen? You bet.

"I remember him looking at me. I was just like, 'Take a deep breath, dude.' He took a deep breath.'" Then Derrion caught the screen pass and took it 31 yards to win the game with one second left.

Add the touchdown to the long list. Add it to a highlight tape that stretches 13 minutes because that's how long the highlights go when you score that much.

"It's kind of funny. I just watched his highlight tape over the (Christmas) break as a parent. Before, I've been his coach," LaTef said. "It wasn't until after the last game that I went up to him and told him, 'Now from this point moving forward I just get to be your dad.'"

The best may still be ahead.

Hampton is just as quick to talk about what Grim is like off the field as on it.

"He's a bright light in this community," the coach said. "That's one thing I'm going to cherish, is the way he carries himself. When other kids were going to the party, he'd go on home."

Even with that maturity and eye-popping numbers, Grim wasn't the most highly recruited prospect.

But as Husker coaches watched Grim begin to light it up his senior year, Riley saw a prospect that could fit into their plans.

"Bright, intelligent guy, and I think has that versatility we like," Riley said. "Could be that fly sweep guy. And obviously, the best predictor of production is past production. He came through."

When the Huskers offered, they had the clear advantage. They had it because of the man who coaches Nebraska's wide receivers.

Grim switched his commitment to Nebraska in September and never looked back.

No reason to start now either.

"He's not seeing this as an ending point for him," Hampton said. "It's actually a passport for him to go even farther."

A closer look at Nebraska's recruiting class for 2016.

How could the rest of the Bucks Nets series shape out?

How could the rest of the Bucks Nets series shape out?

Nebraska has a recruiting class ranked between 30th and 43rd nationally, but the Huskers could make a push toward the Top 25 if the right recruits raise their hands.

"You gain hopefully more trust as you go. Both ways. Them for me and me for them," Mike Riley said of his coaching staff.

A closer look at Nebraska's recruiting class for 2016.

Derrion Grim of McNair High (Calif.) takes off on a touchdown this past season, one of his 37. Grim, a receiver, is an early enrollee in the 2016 Nebraska recruiting class.

Derrion Grim of McNair High (Calif.) looks for running room after making a catch against Franklin High this past season. Grim, a receiver, is an early enrollee in the 2016 Nebraska recruiting class.

Wide receiver Derrion Grim is trying to make his case this spring as one of two Husker enrollees already practicing with the team.