Recapping a wild June in recruiting: Seven NU commits for three classes, new offers, some losses and more
0 Comments
Share this
{{featured_button_text}}
1 of 2 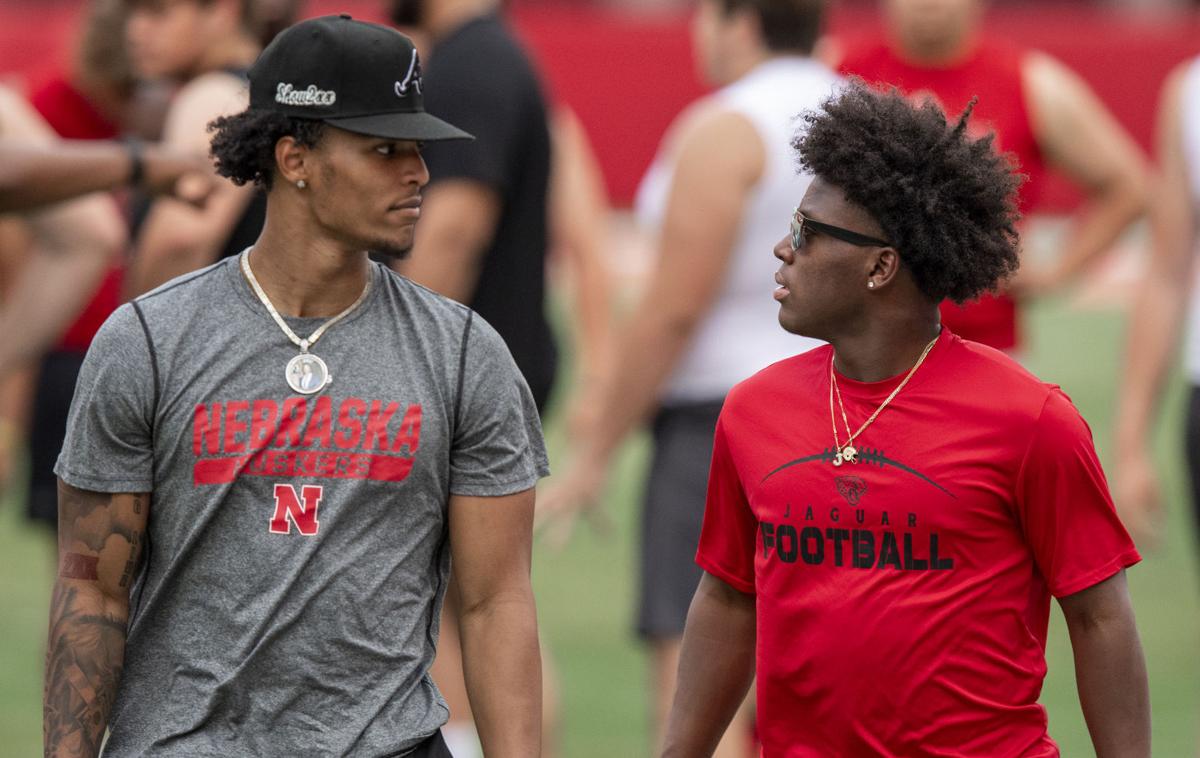 Nebraska football player Myles Farmer (left) talks with James Monds III, who was making an official visit to campus on June 18 during the Friday Night Lights camp at Memorial Stadium. 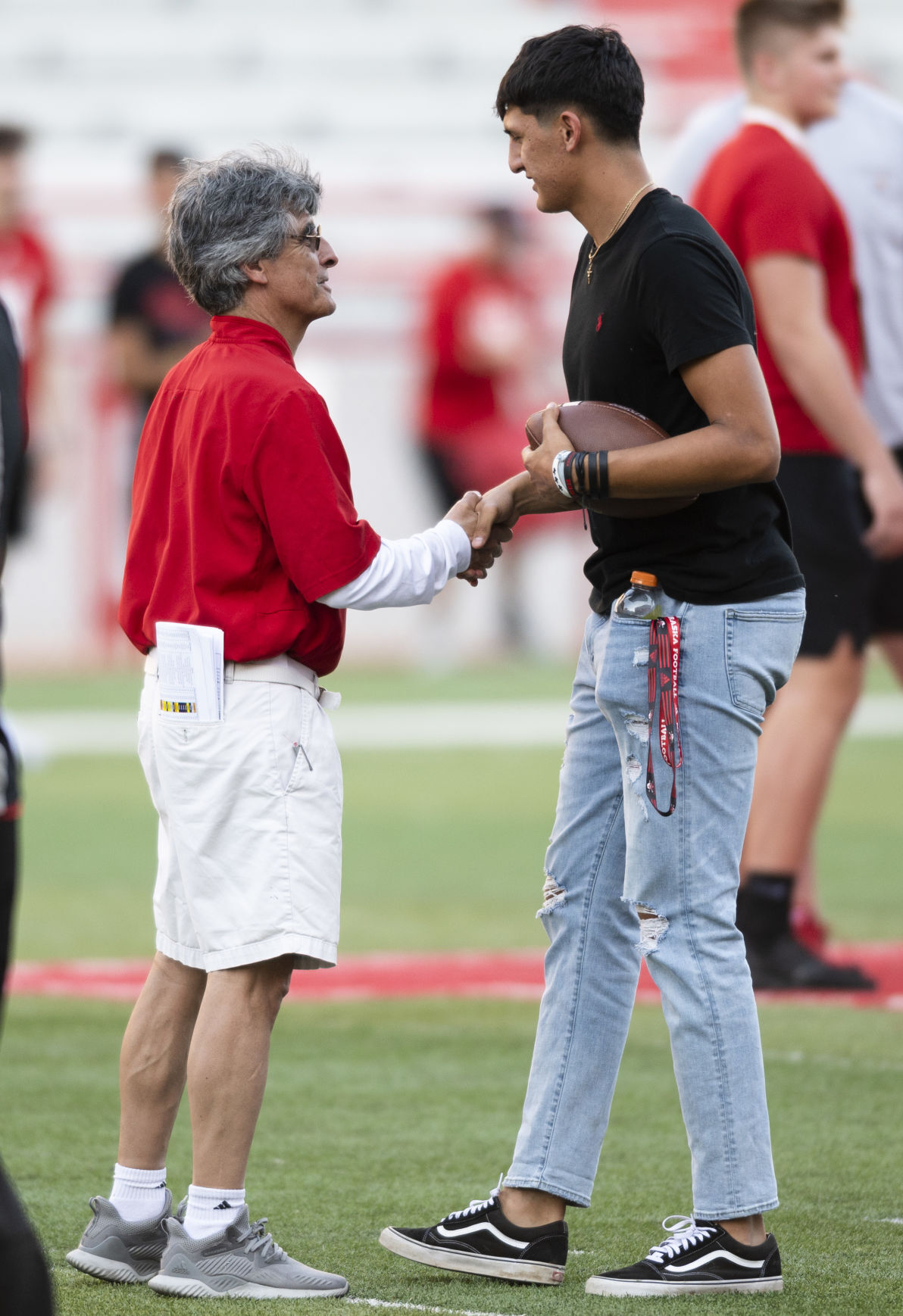 The four-week June recruiting blitz is in the rearview mirror and football coaches around the country are settling in for a couple of weeks of vacation before the ramp-up to preseason camp begins.

Nebraska, like most schools, had an extremely busy month after a year-plus NCAA dead period ended. The Huskers added seven total players to three different recruiting classes, extended offers, got looks at prospects who might earn offers down the road and set the foundation for the rest of the 2022 cycle and beyond.

Let’s run the tape back and try to use what we learned to set up the rest of the year.

Who did Nebraska get?

For the upcoming season, the Huskers added Ohio State transfer defensive back Tyreke Johnson. He’s already on campus and working out with the team and will jump headlong into the competition for playing time in a deep, talented, veteran Nebraska secondary. He’s expected to play mostly corner, but secondary coach Travis Fisher cross-trains everybody.

For the 2023 class, NU added Lincoln Southeast lineman Gunnar Gottula to a two-man class that also includes Pierce tight end Benjamin Brahmer. The Nebraska staff also got its first in-person look at Brahmer and came away feeling like they’ve got a special player on their hands for the future.

The brunt of the work came in the current recruiting cycle. Nebraska added five players to its 2022 class. In chronological order:

That quintet joins the first two pledges in the class — inside linebacker Ernest Hausmann (Columbus) and wide receiver Victor Jones Jr. (Orlando, Florida) — as an early foundation for what is currently expected to be a much smaller class.

Who did Nebraska not get?

Among the 20 class of 2022 players that officially visited Nebraska in June, four have verbally pledged elsewhere: defensive lineman Nico Davillier (Maumelle, Arkansas) committed to Arkansas, offensive lineman Ashton Craig (Lawrenceburg, Indiana) to Notre Dame and wide receiver Landon Samson (Southlake, Texas) to South Carolina all decided on other schools in recent days and weeks and then defensive back James Monds III (Fort Pierce, Florida), whose uncle, Wonder, played for the Huskers in the 1970s, verbally committed to Indiana over NU and Wisconsin on Sunday afternoon..

Who has decision dates coming up?

Running back Justin Williams (Dallas, Georgia) is set to announce their college decision on Monday.

Really, there’s a chance that any of the other players Nebraska has hosted — in particular, perhaps, defensive lineman Jalen Marshall (Overland Park, Kansas) or offensive lineman Valen Erickson (Chicago) — could decide to make a decision this month.

So, where’s this class at, anyway?

Here’s the rundown by position currently: one quarterback, one running back, two receivers, one tight end, two linebackers.

That leaves offensive line, defensive line and defensive back as the areas Nebraska has not yet addressed in the class.

At least a couple of dominoes will fall at those spots in the coming days with Maikkula and potentially Marshall, Erickson and others making decisions.

The wild card at multiple positions is four-star athlete Jaden Mangham (Franklin, Michigan), who visited the final weekend of June. He could be a defensive back or a receiver in the class and said he’s high on Nebraska, among a few other finalists.

How about the future?

Nebraska got a good, long look at several players that could be part of the further-out future, too.

The top of that list, of course, is 2024 quarterback Dylan Raiola (Burleson, Texas). The son of former Husker great and longtime Detroit Lions center Dominic Raiola, Dylan burst onto the national scene by piling up offers before ever starting a game on varsity in Texas. He wowed the coaching staff and earned an offer at a Friday Night Lights camp on June 18, and Nebraska will be vying for his services against several of the best programs in the country.

They also hosted in-state players like 2024 receiver Daevonn Hall and 2024 quarterback Daniel Kaelin, both of Bellevue West; and 2023 pass-rushers Maverick Noonan (Elkhorn South), Teitum Tuioti (Lincoln) and Tausili Akana (Kahuku, Hawaii), who is the top-ranked outside linebacker in the country for his class according to 247Sports.

Nebraska had hundreds of players through campus over the month and certainly has much to sort out, not only for the current class but for future classes as well.

For 2022, the biggest question is whether the next class of college seniors will count against the 85-man roster cap. If, for example, players like Adrian Martinez, Austin Allen and Damion Daniels count against the roster if they decide to return for a sixth season in 2022, the class is going to remain small on the high school side. If the NCAA treats that class the same way it’s treating current "super seniors" like Ben Stille, Deontai Williams and company, then there will be more spots available.

In the meantime, Nebraska still has one more scholarship to use in the 2021 class if finds a player that the staff believes can be a difference-maker this fall and in the future.

Got all that? Camp starts in four weeks. Summer’s going to be over soon for Nebraska.

Photos: Recruits get a taste of Husker football at Friday Night Lights

Transfer RB Deondre Jackson won't be at NU this spring, says he still plans to play for Huskers

He is no longer expected to attend NU this spring due to an academic snag, sources tell the Journal Star.

'We have free agency in college football': Huskers ride on the QB carousel part of sport's new reality

In staying on top of the "free agency" that is the current college football transfer portal, Nebraska and other schools have to do their homework early to lure players.

Recruiting reset: Nebraska's transfer-heavy 2022 class so far and what's left to do (quite a bit, actually)

The Huskers are up to 22 new scholarship players: 13 high school, one juco, eight DI transfers. Here's a position-by-position update.

Nebraska landed a commitment from juco RB Anthony Grant, who rushed for more than 1,700 yards this fall.

Nebraska's relationship with Jackson dates back to the 2020 recruiting cycle, when the Georgia native picked the Aggies over the Huskers, and others.

Driving for 6: OU star Caleb Williams' ripple effect on the Huskers and other QB-needy teams

Here are three observations following Thompson's commitment to Nebraska, including the battle-tested veteran presence he brings.

Hunter Anthony, a veteran college offensive lineman, helped Oklahoma State win the Fiesta Bowl on Saturday and verbally pledged to Nebraska as a transfer on Sunday.

Nebraska football player Myles Farmer (left) talks with James Monds III, who was making an official visit to campus on June 18 during the Friday Night Lights camp at Memorial Stadium.