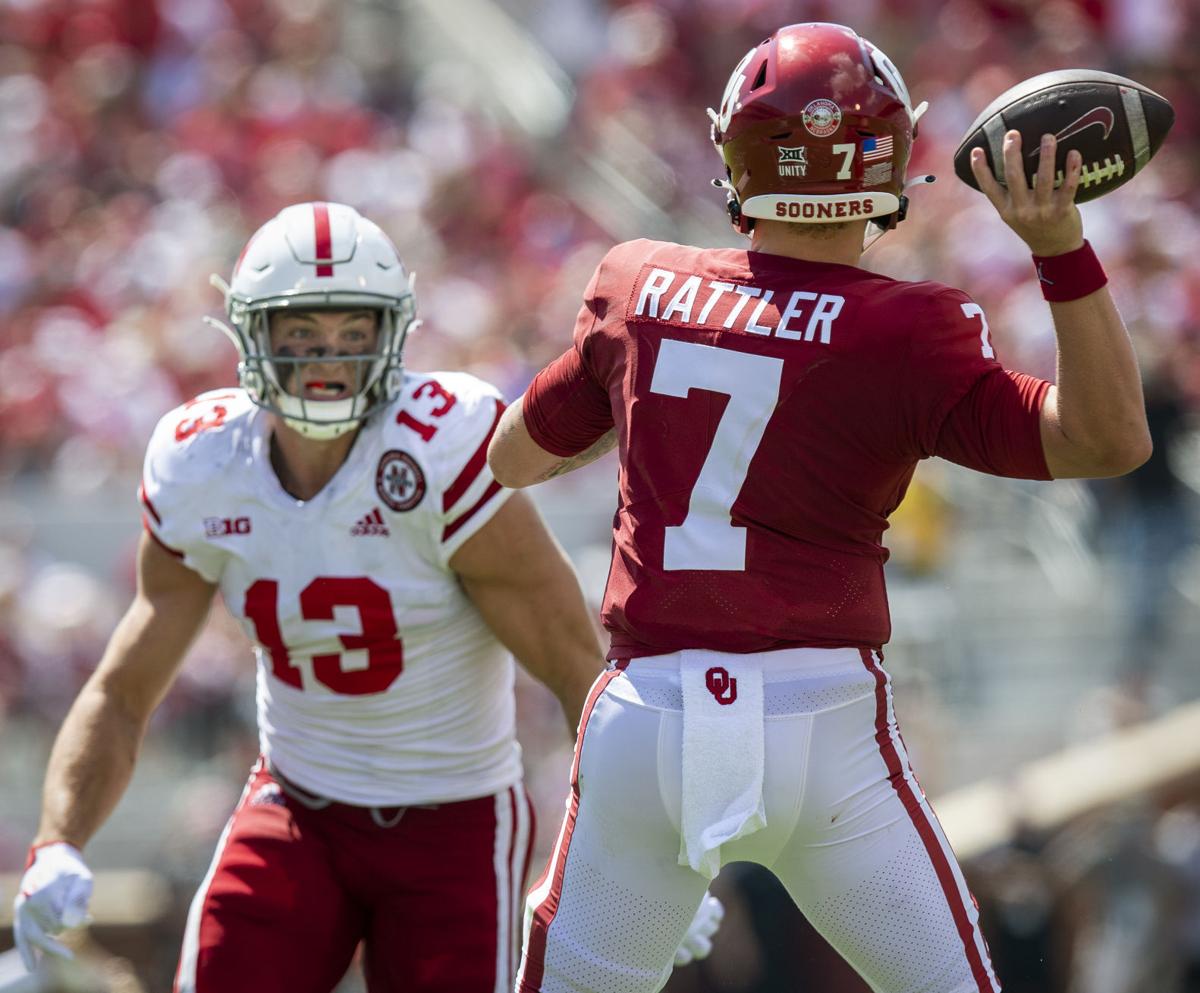 Under pressure from Nebraska's JoJo Domann (13), Oklahoma quarterback Spencer Rattler throws to Marvin Mims on a trick play for a first down in the second half Saturday in Norman, Oklahoma. 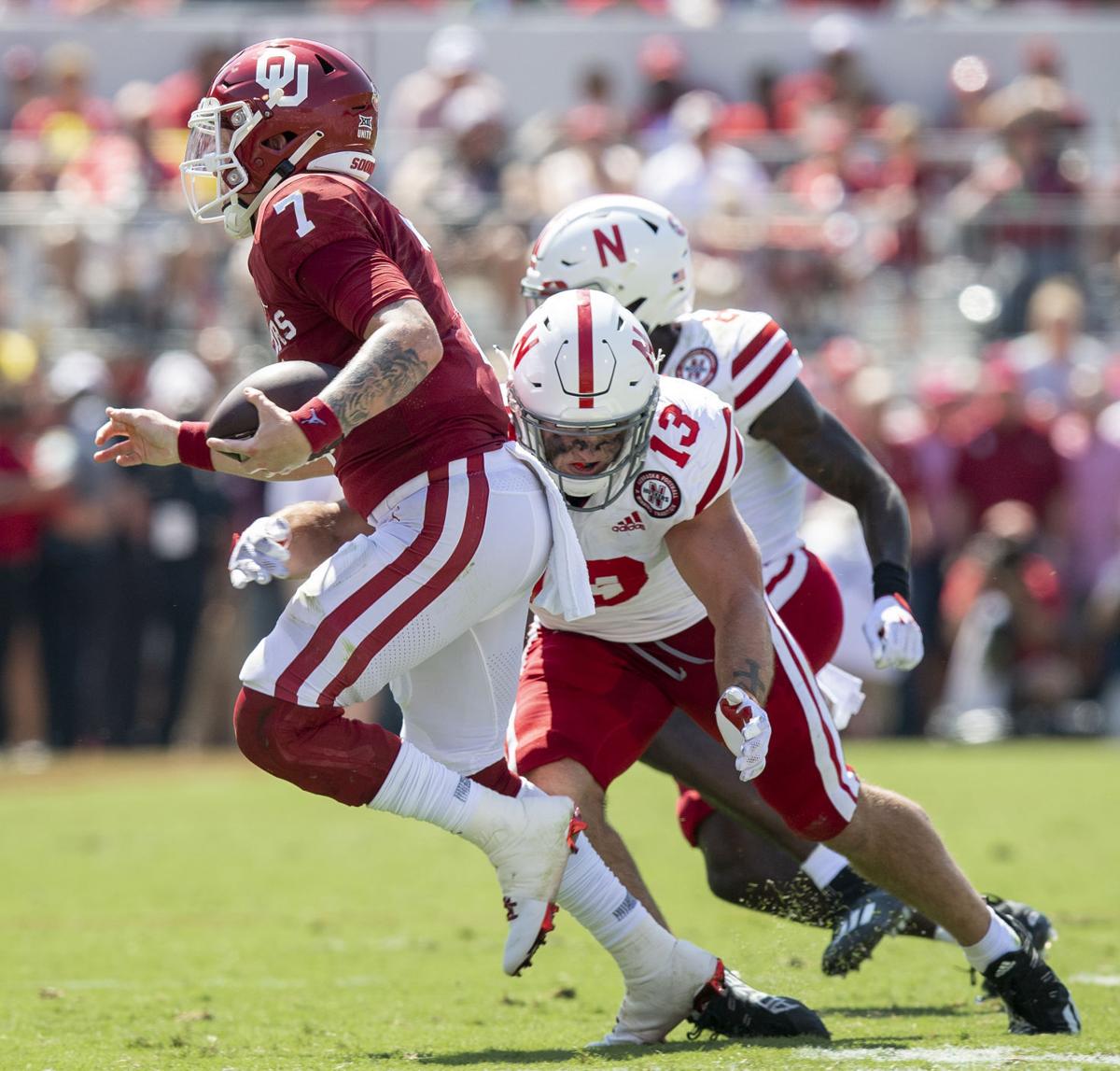 Oklahoma quarterback Spencer Rattler (7) is chased down by Nebraska's JoJo Domann in the second quarter Saturday in Norman, Okla.

Parker Gabriel and Steven M. Sipple break down Nebraska-Oklahoma, and field your questions

Miss the live discussion after Nebraska's 23-16 loss to Oklahoma? Check out the replay.

Things I know, and things I think I know:

It was a critical message — certainly worth keeping in mind as autumn unfolds.

One half of Frost's "mission statement" has held up its end this season, for the most part. The Blackshirts rank 27th nationally in scoring defense, allowing 13.3 points per game. They've allowed a total of only seven points in the fourth quarter this season. Oh, they're not perfect. They've allowed two Power Five teams to average 180.5 rushing yards. They have only four sacks in four games. But they rally hard to the ball. They're a physical crew. Full of fight. Progress is evident.

"We're going to build on this," Nebraska senior outside linebacker JoJo Domann said Saturday following a 23-16 loss at third-ranked Oklahoma. "We're not looking at taking any steps back (in Big Ten play). This was a game where our offense took strides. We have playmakers on offense, and we had guys step up today. Our offensive line stepped up today. Adrian Martinez and the resiliency and heart he plays with, man, it's so easy to rally around that guy. I love playing with him.

"And this defense, we can be great. It's really about choosing to be great each and every moment out there. It's a long game. It's hard to stay engaged for 3½ hours with a crazy environment and stress on you. We love it, though. That's why we play. But we can be a lot better."

That said, Nebraska's defense made Oklahoma work for everything it got on the scoreboard. The Sooners needed at least 10 plays on all three of their touchdown drives.

Think about the popular narrative entering the game: Nebraska's offense surely would have to score in the mid-30s to pull off the upset. No question, Erik Chinander's crew gave Nebraska a chance to prevail, limiting Spencer Rattler to 214 passing yards and one touchdown. However, he wasn't sacked.

"We got him to scramble a bunch," Husker defensive lineman Ty Robinson said. "We hit him when we were supposed to him. But at the end of the day, we still lost. We'll just go back and review."

As for the "Pipeline" part of Frost's preseason message to his team, well, that crew isn't exactly paving the way. If you're a Nebraska fan, you perhaps harken to something Bo Pelini often emphasized: Football is the ultimate team sport.

Martinez, the Huskers' junior quarterback, is enjoying a career resurgence. Frost's staff (finally) has put formidable talent around him, especially at the receiver and tight end positions. But if the offensive line isn't consistently getting a strong push and continues to be dogged by penalties, NU will have to scratch and claw to be a .500 team. Bottom line, Frost needs more from the O-line crew, much more, especially now that the Big Ten season has arrived in earnest.

“In this league (Big Ten), when you look at it, the lines really set the tone for games,” NU running backs coach Ryan Held said recently. “It’s not like we have 50-point games in this league. I mean, you’re looking at games where it’s 20-17. It’s just a grind game. It’s all about fits. It’s all about everybody being where they’re supposed to be. It’s getting movement for the running backs.

“Three yards is a good play in the Big Ten. Obviously, you want more. But at the end of the day, that’s a good play.”

That’s a good mentality to verbalize to players. Constantly.

Nebraska offensive line coach Greg Austin has a big job ahead, starting Saturday at Michigan State, where trench work is a way of life.

* There was a time in this world when you wouldn't be able to easily access video of Nebraska offensive lineman Ethan Piper getting pushed deep into the backfield on Oklahoma's critical block of a third-quarter extra point. The world's changed, though. Plays like that are out there for everyone to see. Over and over. Goodness gracious.

Piper is an excellent athlete. A great kid and teammate. But he clearly wasn't ready on the snap. It happens. And we see it. All of it.

* The late Milt Tenopir, who coached some of college football's most dominant offensive lines with Nebraska during the 1980s and '90s, helped me learn football over the years as much as anyone. After games, I would hurry to ask Tenopir about his group's performance. He often would say, "I need to wait to watch the game video." That's because evaluating O-line play can be tricky and tedious, particularly for a layman like myself.

What exactly is Austin asking of his crew? What sort of techniques are being taught? Is he seeing progress that others aren't seeing?

You know the penalty issue is being addressed — Frost made that clear Saturday — but is there anything more the staff can do in that regard?

Austin is squarely in the spotlight. As a proud former Pipeline member (2003-06), I'm guessing he fully understands the gravity of the situation, and hopefully embraces it.

* Michigan State, at 3-0, is one of the nation's biggest surprises to this point. This from the Detroit Free Press:

"It’s the details that matter, and (Mel) Tucker has preached that since his arrival. As time has progressed in his fledgling regime, Michigan State has increasingly become a more finely tuned machine."

Roll up those sleeves, Pipeline guys.

Photos and videos: Oklahoma holds off Nebraska 50 years after the Game of the Century

A chain-link fence actually played a key role for Nebraska in 1987 when it signed ballyhooed QB recruit Mickey Joseph.

A native of New Orleans, Mickey Joseph spent five seasons on Ed Orgeron's staff at LSU, and left an indelible impression as recruiter and coach.

Under pressure from Nebraska's JoJo Domann (13), Oklahoma quarterback Spencer Rattler throws to Marvin Mims on a trick play for a first down in the second half Saturday in Norman, Oklahoma.

Oklahoma quarterback Spencer Rattler (7) is chased down by Nebraska's JoJo Domann in the second quarter Saturday in Norman, Okla.