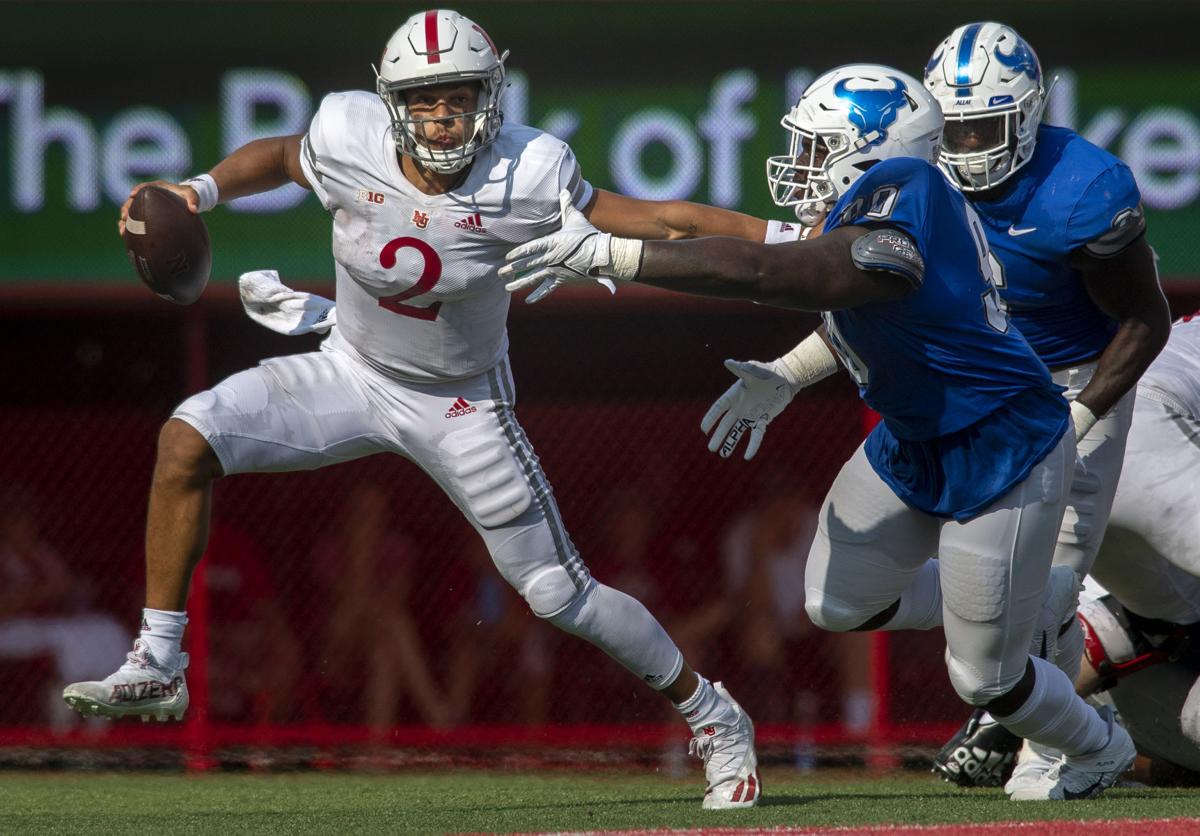 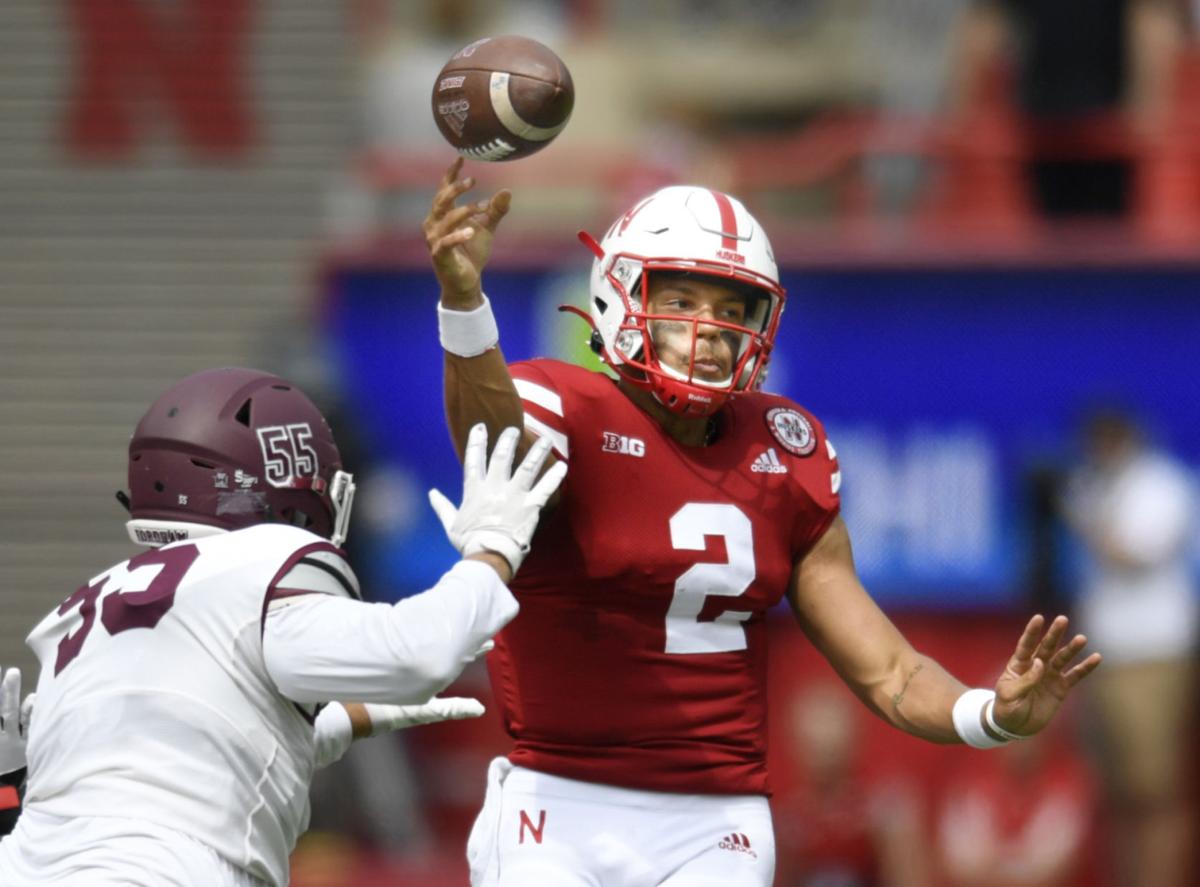 Nebraska quarterback Adrian Martinez is pressured by Fordham's Gavin Watson during the second half of a Sept. 4 game at Memorial Stadium. 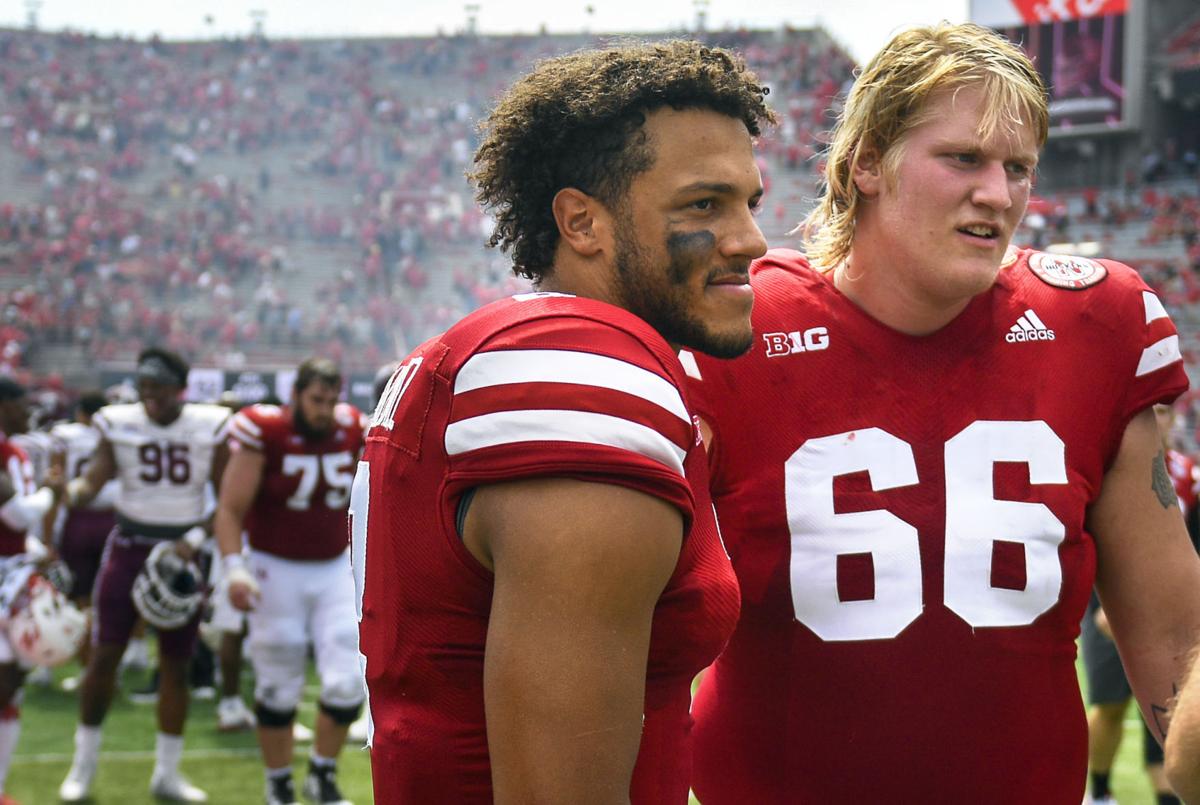 Nebraska quarterback Adrian Martinez (center) and offensive lineman Ezra Miller (66) walk off the field after victory against Fordham on Sept. 4 at Memorial Stadium.

Granted, his coaches did a good job of putting more skill-position talent around him this year, but some of that talent is injured.

Meanwhile, the Husker offensive line is off to a slow start through three games, arguably the team’s biggest concern at the moment.

If Nebraska (2-1) expects to upset third-ranked Oklahoma (2-0) on Saturday, think about the type of numbers the Huskers would need from their versatile — and oft-criticized — junior quarterback.

He almost certainly would have to rush for 100-plus yards and pass for 250-plus.

Considering Oklahoma’s potent offense featuring four- and five-star players all over the field, he’ll likely need to account for no fewer than three touchdowns. Nebraska likely will need at least 35 points to win.

He’ll need to lead his team at a high level, something he embraces.

What’s his level of comfort with how much is asked of him?

“I would say I’ve been through a lot here at Nebraska, and I know it’s part of the territory in all phases,” Martinez told the Journal Star earlier this week. “Whether that’s on the field, off the field, in the locker room, whatever it is — I welcome it. All of it. It’s part of why I love football. If the coach needs me to go out and be the outside receiver and run a ‘go’ route, I’ll do that, too.

A 6-foot-2, 215-pound native of Fresno, California, Martinez enters this week’s game in seemingly an excellent frame of mind. His maturity allows him to keep things in proper perspective even in advance of a game that’s producing ample discussion about the program's glorious past as well as Nebraska’s issues in the present.

Those issues include an ongoing NCAA investigation into the use of analysts/consultants in coaching roles.

“Oklahoma is a damned good football team, and we need all the focus on them, not on all this other stuff that’s floating around,” Martinez said. “I have no time to be worrying about anything else. It’s as simple as that for me, and then making sure our guys are thinking the same way. We need everything we have to beat this team.”

He certainly has earned the confidence he’s apparently feeling. After all, he comes off two exceptional performances in wins against Fordham (52-7) and Buffalo (28-3).

The season opener was another story. Martinez was only 16-for-32 passing and air-mailed a handful of throws to open receivers in a 30-22 loss at Illinois.

He also lost a fumble that was returned for a touchdown.

However, “I would say our team wasn’t discouraged after the Week 0 loss, especially myself,” Martinez said. “I knew the type of team we could still be and how much talent we have and the work we’ve put in. I knew what we were capable of. But with that being said, we needed a couple games to establish some of those things, and I believe we did that.”

“Our guys are really confident,” he added. “Part of that has to do with some of the player-led leadership we’ve had this year. It’s also a result of some veteran guys like Samori Toure stepping up and speaking up and making sure our guys were ready to go Monday (following the opening loss). Nothing changed in our minds. That gives me even more confidence in our guys. We used it against Fordham, then we used it against Buffalo.

“We’ve got to keep chipping away and keep elevating.”

Four Downs: Who will be ready to play against Oklahoma? Plus three other Huskers takeaways

Two-Minute Drill: Sizing up the challenge for Nebraska's offensive line

Toure, a graduate transfer from Montana, clearly has gained the trust of Martinez. With 13 catches for 306 yards and two touchdowns, Toure is an example of a player who takes some pressure off Martinez. Toure becomes even more valuable as starting receiver Oliver Martin, who was targeted 11 times against Illinois, continues to nurse a knee injury.

Talented tight ends Travis Vokolek and Austin Allen also have been banged up.

Martinez won’t make excuses. Let’s face it, leaders don’t do that. He’ll continue to hold teammates accountable, just as he did during the Fordham game when he exchanged words with some of his linemen.

He wanted more from them, and vice versa.

“We continually get after each other, which is what I love,” he said. “It’s a team dynamic and it’s something that I think is needed from all of us. I mean, accountability is love, right? If you really care about someone, you’re going to keep them accountable.

“When Monday comes around, our team leaders are getting after each other to keep that standard where we need it.”

Martinez talks much more about the team than himself. He clearly prefers it that way. He’s just that type of individual.

“It’s really about us as a unit,” he said. “The team — the unit — has been meshing better. I think that Week 0 game, we had too many mistakes, and we’ve gotten those things cleaned up.”

Nebraska clearly has found some footing as a team in the last two games.

Do the Huskers have enough firepower to overcome the Sooners? Highly doubtful.

But if Martinez avoids the turnover bug and gets more help on offense — a lot more, especially from the line — it could be an interesting afternoon.

The headline says "a quick departure from heavy Husker conversation" because it had better be quick.

Steven M. Sipple: Why Alberts' presence meaningful and other takeaways from NU luncheon

As Scott Frost discussed his interactions with Trev Alberts, it was difficult to avoid recollections of previous head coach-A.D. relationships.

Adrian Martinez took a hard shot to his jaw Sept. 25 at Michigan State. If it's still bothering him, as has been speculated, he isn't saying so.

One criticism of Frost’s program seems to be fading into the woodwork. But, an important measure of how far it's come looms Saturday.

Nebraska quarterback Adrian Martinez is pressured by Fordham's Gavin Watson during the second half of a Sept. 4 game at Memorial Stadium.

Nebraska quarterback Adrian Martinez (center) and offensive lineman Ezra Miller (66) walk off the field after victory against Fordham on Sept. 4 at Memorial Stadium.