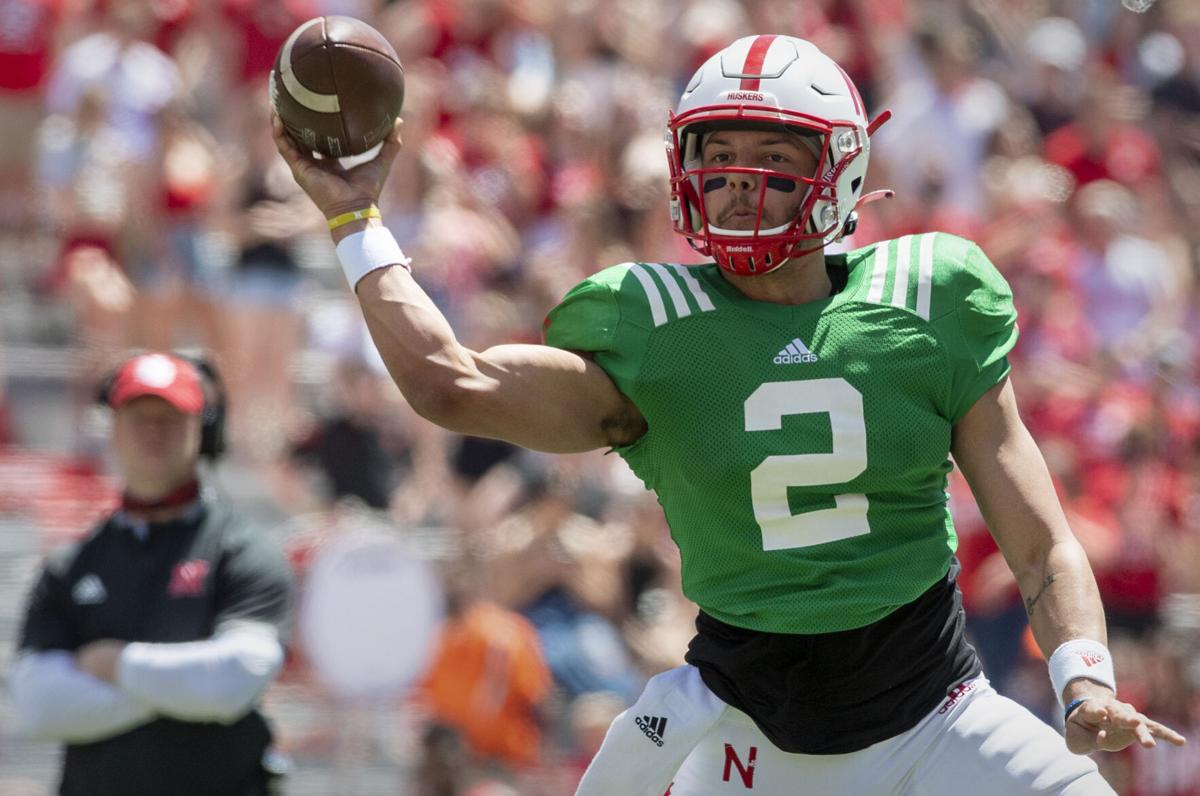 Adrian Martinez (2) throws a pass as Huskers' head coach Scott Frost looks on during the Red-White Spring Game May 1 at Memorial Stadium. 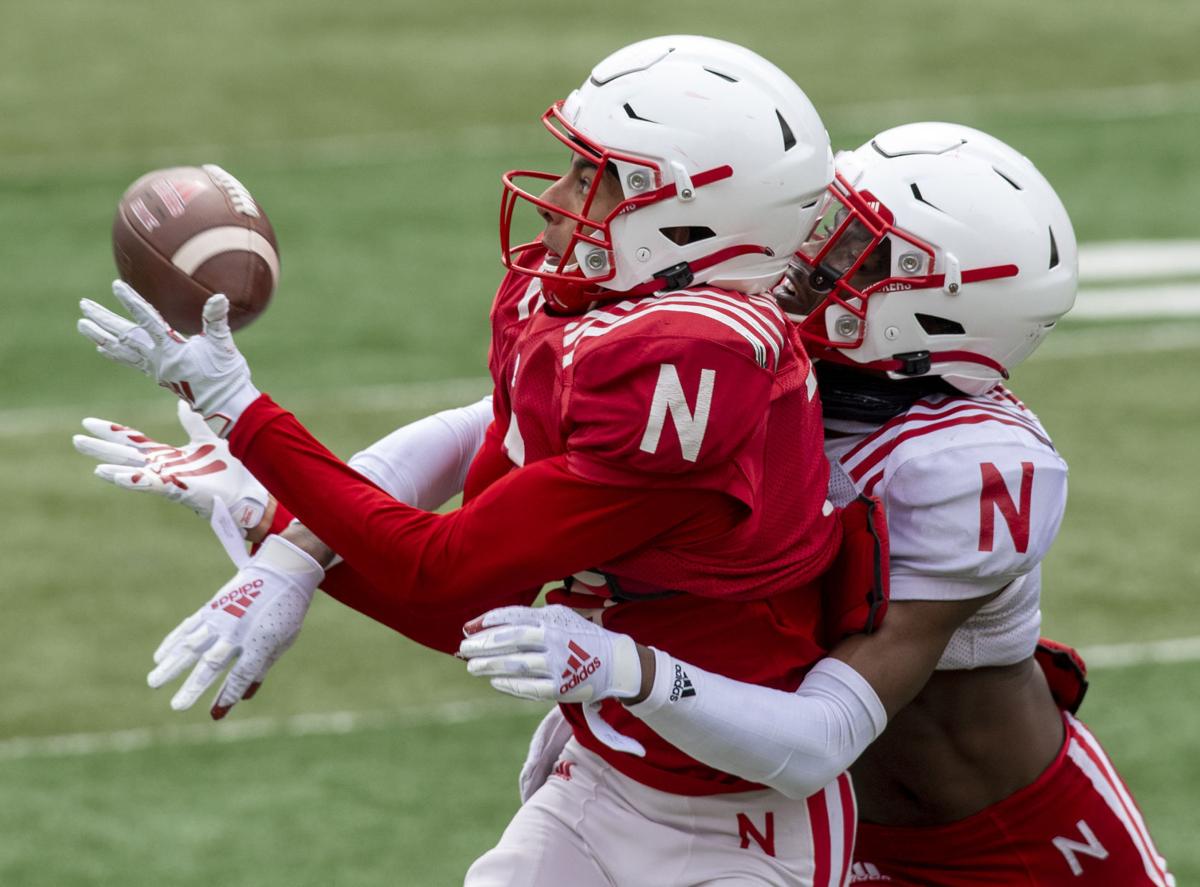 Nebraska wide receiver Jamie Nance (left) catches a pass under pressure from Quinton Newsome during a football practice on April 17 at Memorial Stadium. 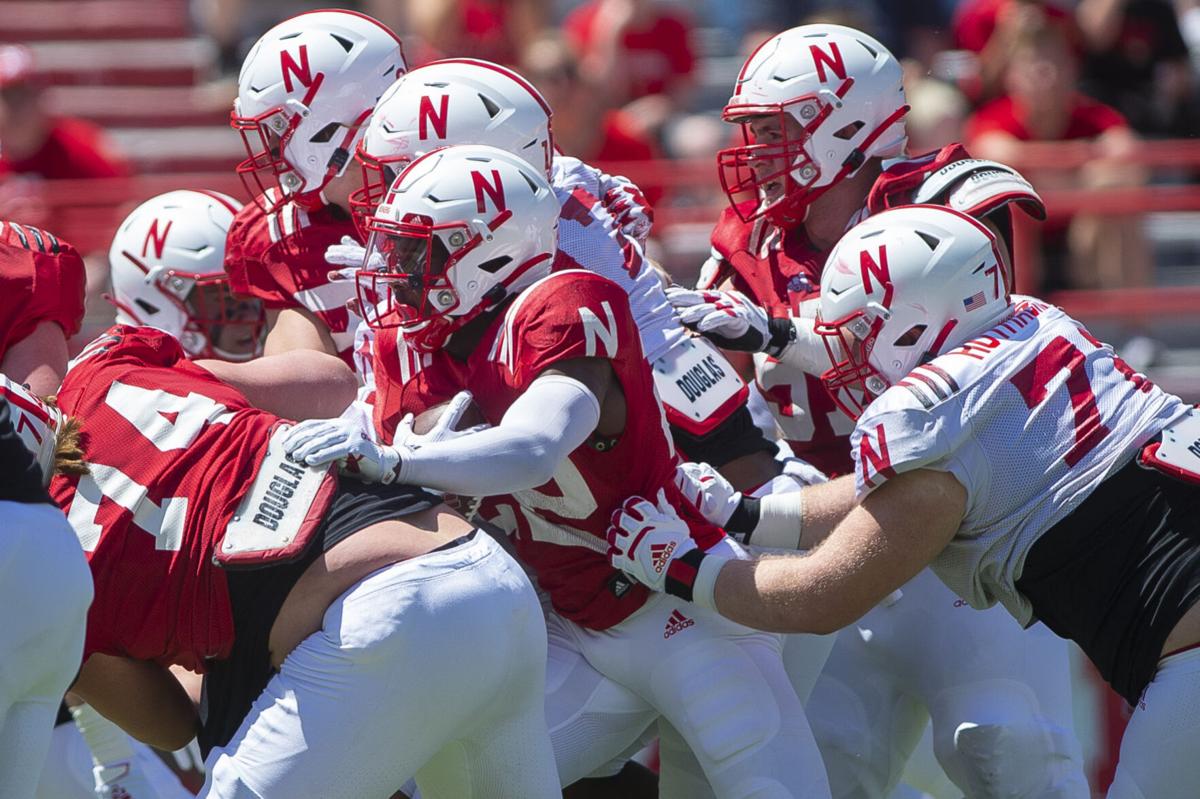 The Red Team's Gabe Ervin (center) is pushed by teammates as he attempts to carry the ball for a few extra yards during the Red-White Spring Game on Saturday at Memorial Stadium.

The Red-White Spring Game is in the books, and now a relatively short summer lies ahead before the start of Nebraska's preseason camp in late July.

Seems like a good time to once again open up the mailbag.

Thank you for your questions.

Pondering the portal: What positions might Nebraska add to with its final two scholarship spots?

If the defense lives up to the hype, do you think this could help reflect on the offense? And how much? — Dustin H.

As luck would have it, Nebraska quarterback Adrian Martinez was asked this question Saturday following the Spring Game.

His answer perhaps provided Husker fans with a source of optimism.

"There's a certain standard you have to play to if you want to have a good day," Martinez said. "You can't just go out there and say, 'Oh, we're just going to lean on these (defensive) guys and we're going to throw the ball here and there.' No, those guys are coming and they're coming with energy. If you don't match it, you're in for a really bad day.

"They've pushed us to get better each day, each practice. It's definitely elevated us as a team."

It seems Nebraska's defense, which returns nine starters, practices with the sort of energy the program needs to make significant improvement.

"We try to come out every day and just dog-pound the offense," NU standout cornerback Cam Taylor-Britt said. "We just try to make it very tough on them to even get yards."

It should be noted Nebraska's defense has room for improvement. It ranked 50th nationally in total defense in 2020, while the offense ranked 66th.

A year after transferring from CSU, Husker OL Nouili has the look of 'a real dude'

There's no doubt Taylor-Britt can help the quarterbacks, particularly freshmen Logan Smothers and Heinrich Haarberg. Taylor-Britt understands the QB position, having played it at Park Crossing High School in Alabama.

"The young quarterbacks have shown me a lot, I can say," Taylor-Britt said. "(Coaches) throw them in sometimes to go against the (first string) in practice. They execute on some things. I know I don't play quarterback anymore, but I try to give the guys tips on what I see coming from a defensive back's perspective. I tell them to stop staring your receiver down sometimes.

"Because I'm an older defensive back, I can tell when they do that."

As for Nebraska's running game, Taylor-Britt said it's gotten "a lot better." The Huskers ranked a respectable 28th in rushing last season, averaging 201.4 yards per game, but too much of that production came from the quarterbacks.

"We're going downhill more, straight pounding the football, man," Taylor-Britt said. "We can see the offensive linemen are taking pride in their blocking now, just giving Adrian more time or driving guys and getting to the second level and opening up a hole or gap for the running back to get through.

"They're looking a lot better."

In your eyes, who looks like Day One NFL Draft material for 2022 and beyond on the current Husker roster? — Trevor V.

First off, let's establish that Nebraska hasn’t had a player chosen in the top four rounds since 2016, when defensive linemen Maliek Collins and Vincent Valentine both were third-round picks and offensive lineman Alex Lewis went in the fourth.

That's a telling stat — thank you, Dirk Chatelain of the Omaha World-Herald, for pointing it out — particularly for a program with four straight losing seasons.

Georgia Tech and Arizona are the only other Power Five programs without a pick in the first four rounds since 2016.

Scott Frost is well-aware Nebraska has to start producing surefire NFL players, at least a handful of picks a year, if it wants to consistently contend for Big Ten crowns.

Players who get drafted in the top four rounds often are difference-makers, especially those drafted in the top two rounds. Those are the guys who often put teams over the top in close games. Yes, it's on the coaches to land those types of athletes.

It's not as if the current Nebraska roster is teeming with obvious first-day selections, or even second-day picks (rounds two and three), for 2022 and beyond.

If Taylor-Britt raises his game another notch, it's easy to imagine him as a second-round pick. I'll stop there. There's impressive young talent on the roster, but it's difficult to project how well freshmen such as Turner Corcoran and Zavier Betts or even sophomores such as Quinton Newsome, Cam Jurgens and Luke Reimer are going to develop.

For now, let's just say Frost has raised the levels of size and athleticism on the roster. But future NFL Drafts will tell us plenty.

Did coach Frost see enough game-ready talent in Smothers and Haarberg that he doesn't go to the portal looking for backup to #2? Did you see a B1G-ready punter Saturday? What other position(s) could the staff pursue in the portal? — K.A.

Frost has said on at least two occasions Nebraska doesn't plan to go to the portal for a quarterback. It's a tricky situation. Would a transfer QB be willing to sit behind Martinez, who's regarded as the surefire starter?

As for the punter situation, Will Przystup averaged 41.3 yards on 24 attempts last season as the Huskers ranked 111th nationally in net punting (34.67 yards). The staff recruited Australian Daniel Cerni to challenge for the starting duties, but he's still learning the nuances of American football. Suffice it to say the competition is ongoing.

Our Parker Gabriel analyzes the portal matter in a story for HuskerExtra.com. The idea of landing someone who can blast kickoffs through the end zone intrigues me.

Would Matt Davison be a candidate to replace Bill Moos as Nebraska athletic director when Moos retires? Davison certainly proved he can raise money, which he did for the football complex recently — Kevin B.

Davison's profile definitely got a mega-boost last week when UNL chancellor Ronnie Green made it clear that Davison has led the way in raising funds for the $155 million facility. A native of Tecumseh, Davison turns 43 in October. That's pretty young for the job, but certainly not a deal-breaker.

Before we go any further with the discussion, there's a key question: Would Davison even be interested in the job?

An AD has to say "no" to people on a regular basis. The job isn't for everyone.

Photos: All of the sights from the return of the Red-White Spring Game at Memorial Stadium

In the latest "Things I know" column, we cover Lee Sterling's lack of confidence in Adrian Martinez, and put some transfer news into perspective.

Steven M. Sipple: Moos on Alvarez: ‘When he had something to say, it always had value’

Bill Moos tells a story of a breakfast encounter with Barry Alvarez that encapsulates the edge the former Badger coach and AD brought to the Big Ten.

Matt Davison says Nebraska's new complex will have advantages over Clemson's palace, including the fact it's connected to the stadium.

Be it eight teams or 12 teams, expanding the playoff makes sense, especially in the context of declining TV ratings for the CFP national title game.

Buffalo would've been a more dangerous opponent for Nebraska had Lance Leipold returned as head coach and a raft of Buffalo players not entered the transfer portal.

Steven M. Sipple: Why Raiola should be on next Hall ballot; and Husker QB recruiting heats up

Nebraska AD Bill Moos believes it's harder to be the hunted than the hunter, which is why he should help Will Bolt as much as he can.

Adrian Martinez (2) throws a pass as Huskers' head coach Scott Frost looks on during the Red-White Spring Game May 1 at Memorial Stadium.

Nebraska wide receiver Jamie Nance (left) catches a pass under pressure from Quinton Newsome during a football practice on April 17 at Memorial Stadium.

The Red Team's Gabe Ervin (center) is pushed by teammates as he attempts to carry the ball for a few extra yards during the Red-White Spring Game on Saturday at Memorial Stadium.