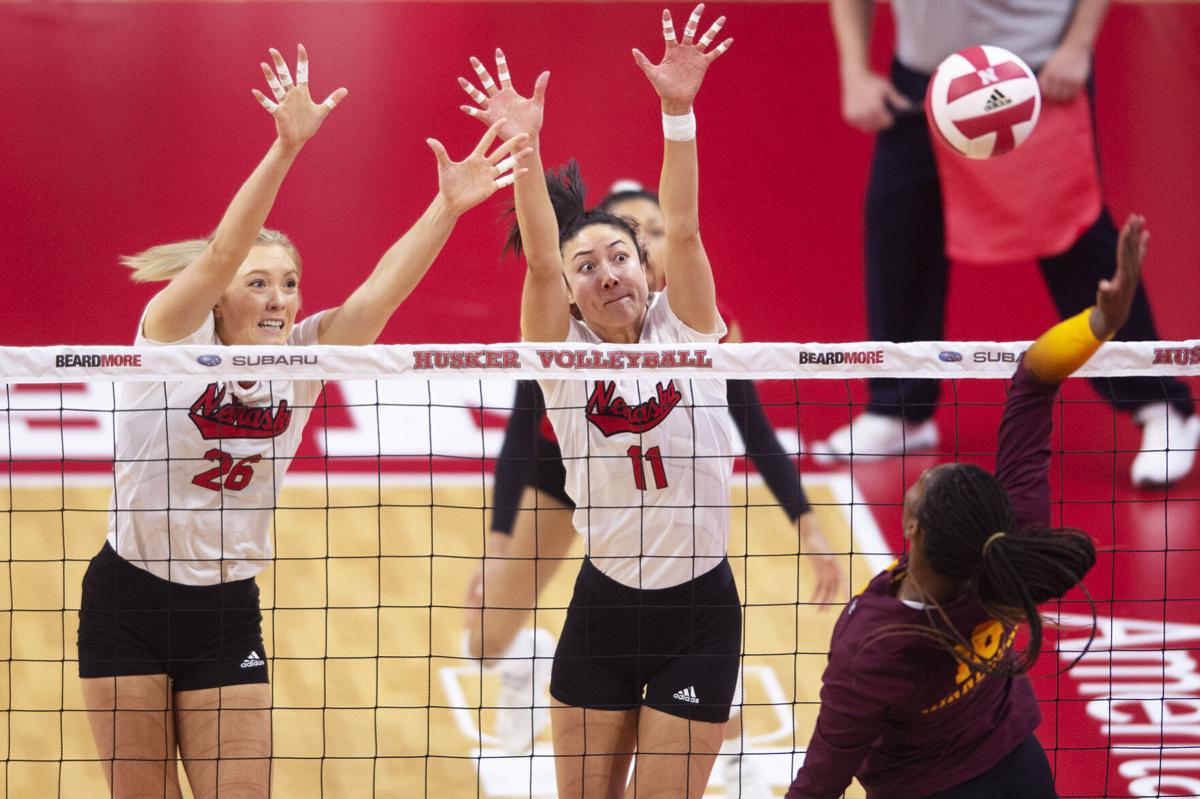 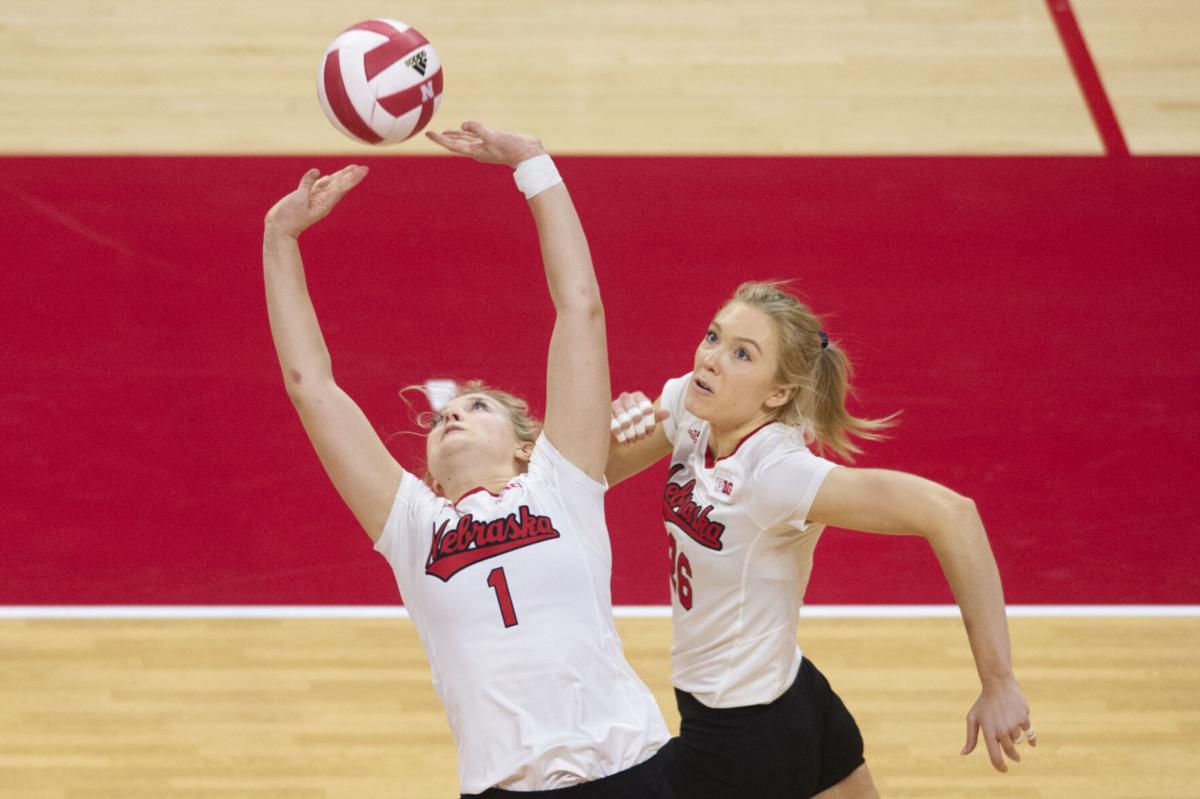 Nebraska's Nicklin Hames (1) sets the ball for teammate Lauren Stivrins in the second set on Sunday at the Devaney Sports Center.

Friday’s loss for the Nebraska volleyball team against Minnesota wasn’t that bad, right?

The Gophers won in four sets, but Nebraska was on the verge of leading the match 2-1 and lost the final two sets by just two points apiece against a team that played in the Final Four last season. And the Gophers have probably the best right-side hitter in the nation in Stephanie Samedy.

Well, maybe it was bad.

'She’s playing better than anybody in the country': Samedy, No. 5 Minnesota hand Nebraska first loss

'Tyler has been our offensive guru': Hildebrand, Cook, working to take Nebraska's offense up a notch

"It just seemed like everything was a little bit off,” said Nebraska’s Lauren Stivrins of Friday’s loss. "We would have good plays here and there, but we had no type of consistency. I don’t know, it just seemed like individuals out there, and not a team unit."

If Friday’s match was a football game the Gophers had the better offense, defense and special teams.

But skip forward two days and everything is back to normal for Husker volleyball.

In Sunday’s rematch against the fifth-ranked Gophers not only did No. 4 Nebraska flip the result, but it also got a much different outcome that shows it can play with the top teams this season.

So the Huskers (7-1) earned a weekend split while playing their first big matches of the season.

Nebraska had a .300 hitting percentage and held the Gophers to just .153. Nebraska outblocked the Gophers 8-4 after Minnesota had 20 blocks Friday.

And that made for a very satisfying day for the Huskers.

“I just really enjoyed how this team was able to bounce back,” Stivrins said. “I think what happened on Friday was so unlike us the way that we practice and the way that we train. So to see everyone come back with a completely different outlook on the game and a different energy, it was so much fun and it made me so proud of them.”

This was a defining moment for the early part of the season, Nebraska coach John Cook said.

"Minnesota knocked us down and we got back up and fought back," he said. "We fought back and played really well today, so that’s a good sign. We need that. When we play some of the other teams we’ve been playing we can get by with our talent and not having a sense of urgency on every point."

There were several significant improvements that helped Nebraska win, but three of the biggest were Nebraska’s serve-receive, Lexi Sun and Nebraska’s defense against Samedy.

Nebraska never got aced and didn’t let CC McGraw’s serving runs take it out of a set this time.

Nebraska's improvement in serve-receive was "night and day."

"We were a completely different team today," Cook said. "We got (setter Nicklin Hames) the ball, and to be able to run an offense. Today we got to see what we’ve been looking like in practice. I tell you guys all of the time, serving and passing is the most important."

Nebraska adjustments from Round 1 to Round 2 of the weekend series included changing its rotation to be better equipped to quickly win a point when McGraw served and having Riley Zuhn or Sun matched up to block Samedy most of the match.

"I just think (Sun) came out and whatever interference she had on Friday she was free and clear today," Cook said. "That’s what we expect of her every night. You’re a senior. She got challenged Friday night. Your stud players have got to battle with these good teams, and she did a great job with that today. It sets the tone for our whole team when she’s like that."

A little suspense arrived at the finish. The Gophers tied the third set at 22 on a kill by Samedy with a shot that hit Hames in the head and knocked her down. Hames stayed in for one play, but then backup Anni Evans came in as part of a double substitution. Evans set Sun for the kills that won the final two points of the match.

Nebraska’s good passing helped the Huskers get 15 kills from the middle-blocker position, while the Gophers got just five kills from that spot.

Stivrins had eight kills and hit .400. Kayla Caffey played her best match as a Husker with seven kills and seven blocks while hitting .455. 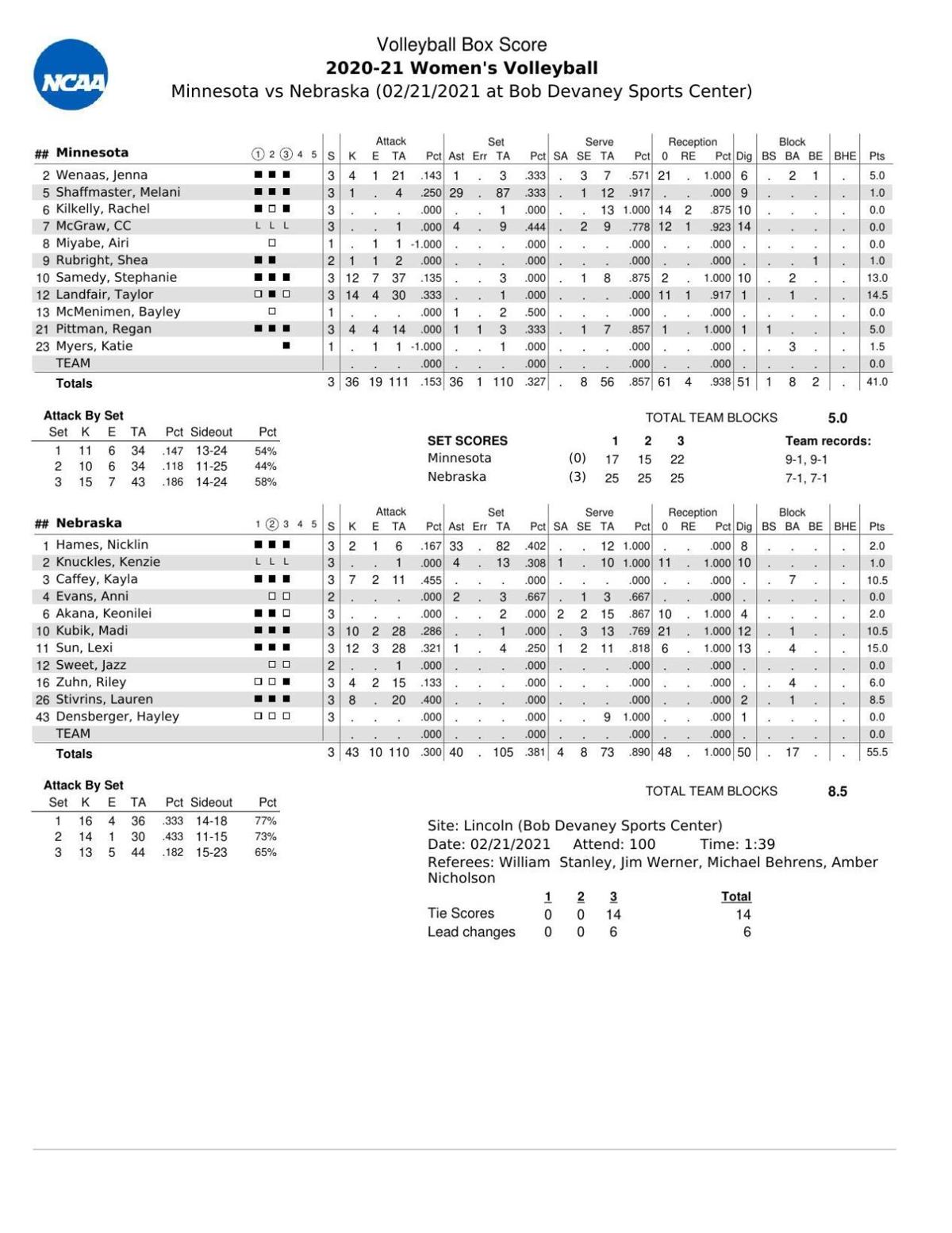 Nicklin Hames and her Husker teammates know to brace for bad news when a particular text message from John Cook chimes their phones.

The 1-minute video, viewed at least 90,000 times, gives a glimpse of the Huskers' togetherness, which could be even more important this season.

While Nebraska was able to practice last weekend, it’s not the same experience you’d get from playing Wisconsin, the No. 1 team in the nation.

Second sweep in a row improves No. 4 Nebraska volleyball team to 8-1

“We were able to play some really good volleyball from 19 points on,” John Cook said.

With the addition of Kayla Caffey this season, the Huskers always have a threat at the middle blocker spot — and that showed at Illinois.

Nebraska's Nicklin Hames (1) sets the ball for teammate Lauren Stivrins in the second set on Sunday at the Devaney Sports Center. 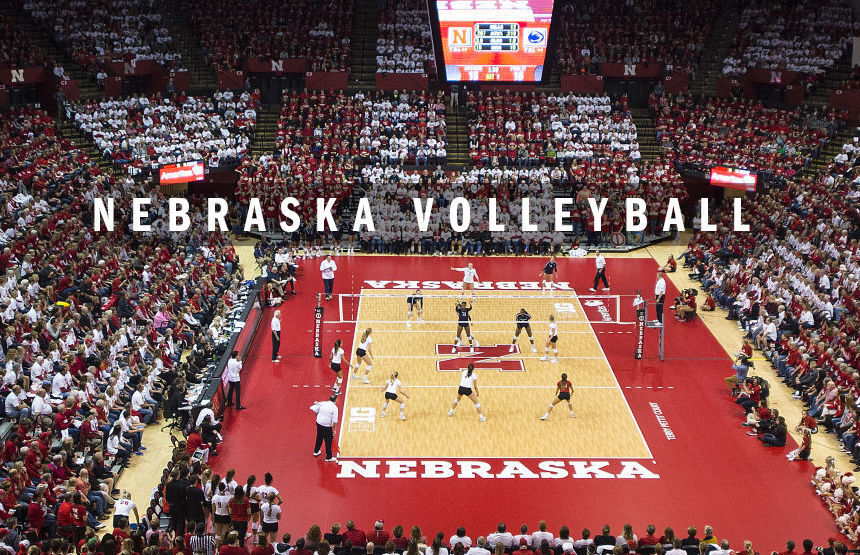