The starting lineup for the Nebraska volleyball team for at least now doesn’t include two-time All-American outside hitter Lexi Sun.

During the opening four weeks of the season, coach John Cook changed the starters from match to match trying to find the best lineup and to give several players at the hitter positions the chance to prove themselves.

But now that the Big Ten season has begun, Cook said he’s choosing a regular group of starters and letting that group play for a while in hopes that a core group can bond and find a better rhythm on offense than the Huskers have had thus far.

Kubik had a great start to the match, with five kills on her first eight attempts with no errors. Kubik often faced two blockers, but did a good job of mixing up her attacks to get kills.

And Krause had her best hitting match as Husker, having just two errors over 26 attempts for a .500 hitting percentage.

The others starters were as expected: setter Nicklin Hames, middle blockers Kayla Caffey and Callie Schwarzenbach and libero Lexi Rodriguez. Caffey was great again, with 12 kills on .647 hitting.

Sun still entered the match in the fourth set for Batenhorst in a move made in hopes of improving Nebraska’s defense. It worked, with Sun getting three blocks in short work.

“Lexi, in my opinion, when she’s dialed in, is the best left-side blocker in the country,” said Cook on the Husker Radio Network. “We were getting lit up over there in the red zone so I said, ‘Lexi, you got to go in there and shut this down.’ And she did. You saw when she did that (Northwestern) kind of fell apart.”

Nebraska nearly swept the Wildcats, but a third-set rally came up just short.

Nebraska’s .308 hitting percentage was its second-highest of the season. Hames had 45 set assists as Nebraska topped the Wildcats in kills 60-49.

Cook was impressed with how the Husker fought in the fourth set.

“I thought Nicklin really led and was keeping us engaged and fighting,” Cook said. “And Madi was doing a little of that. And (Kenzie Knuckles), she does so much for us with her fighting spirit and just competing.”

Cook’s decision at the hitter positions was difficult because there weren’t three obvious choices. Each of the five had more than 100 hitting attempts this season, but none was hitting above .200 (.250 is the goal).

Sun, who earned third-team All-American honors the past two seasons, had been Nebraska’s season leader in kills. But she hasn’t been as consistent with her hitting this season. Her hitting percentage is .166, after coming into the season with a career average of .250.

During the last two matches Sun started, in losses against Utah and Louisville, she had a hitting percentage of .000 in each match.

* Northwestern (5-7) was one of just two Big Ten teams that had a losing record during the regular season. 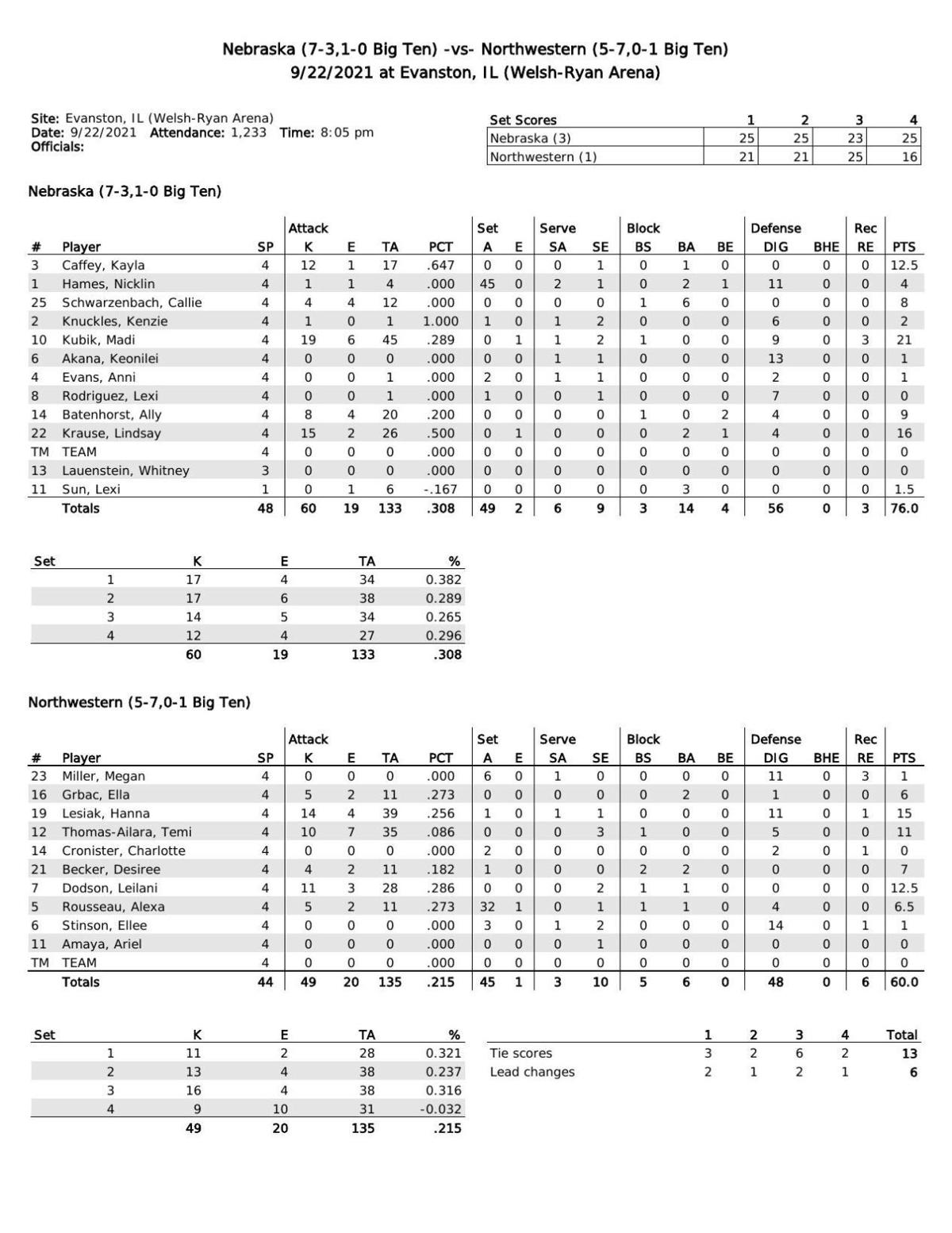 Photos: Huskers and Cardinals meet in a top-six clash at Devaney Sports Center

It was Nebraska’s first match against a ranked Big Ten team, and the Huskers were up to the challenge. So much for that losing streak.