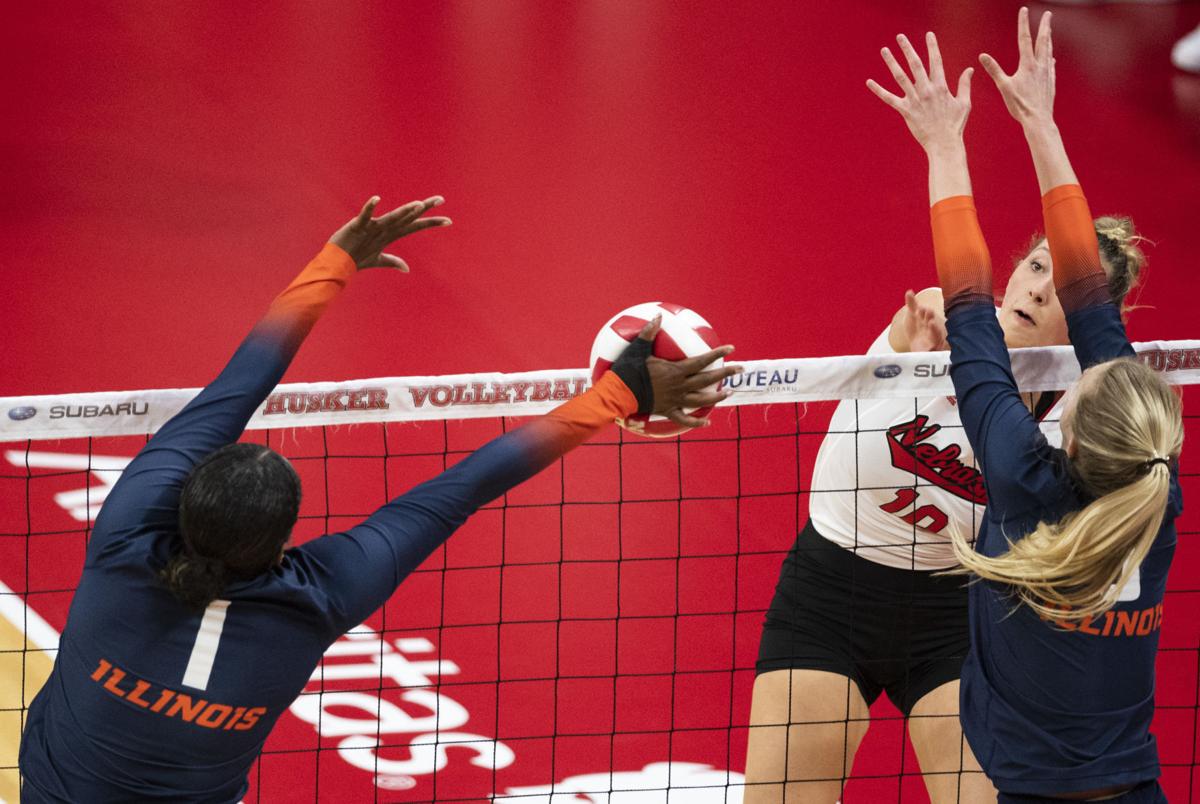 Nebraska's Madi Kubik hits against a block by Illinois' Kennedy Collins's (1) in the first set Saturday at the Devaney Sports Center. 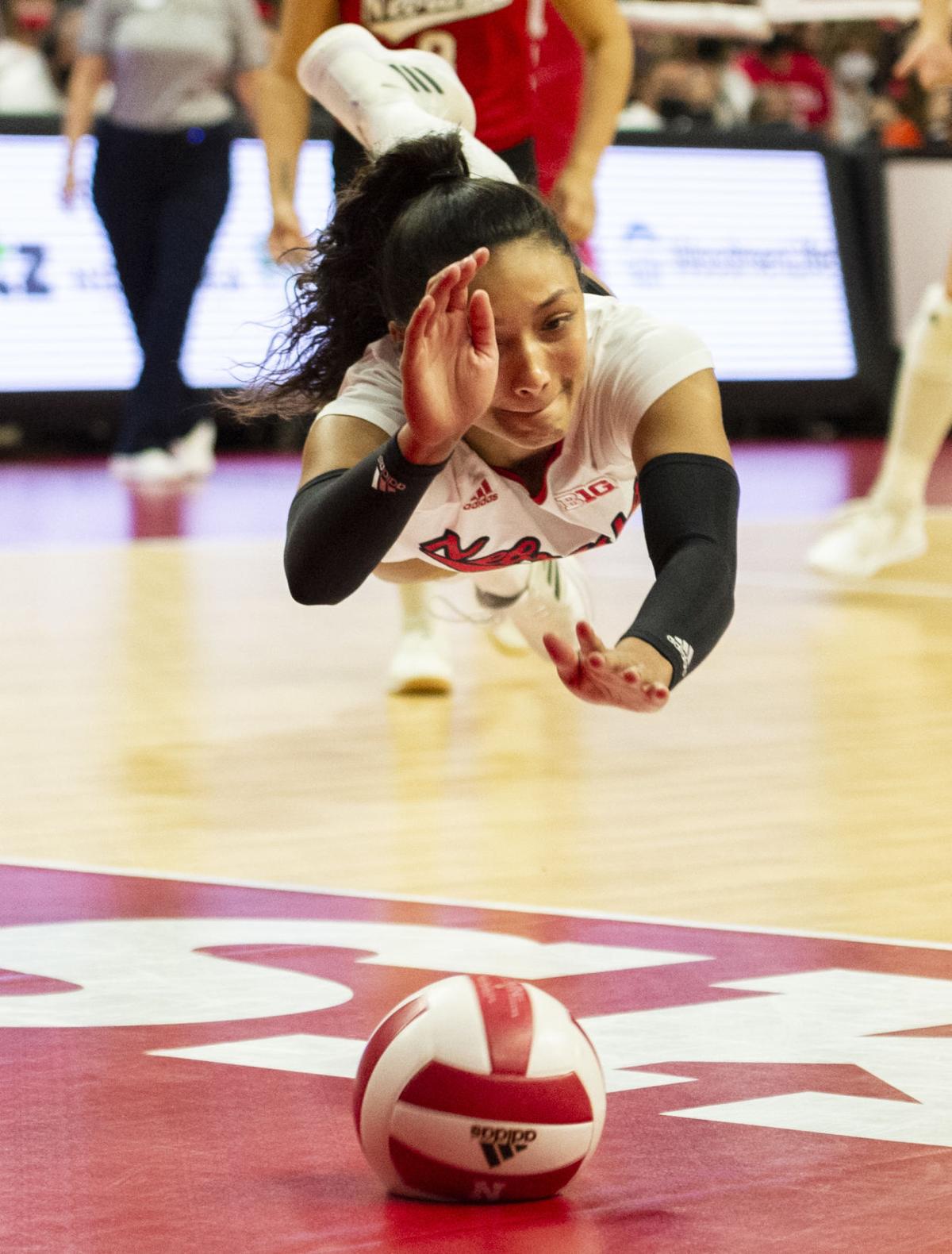 Nebraska's Kenzie Knuckles can't quite get a hand on the ball as she dives for a  ball in the second set of the Huskers' match against Illinois on Saturday at the Devaney Sports Center.

Nebraska’s three-set win against Illinois on Saturday was the Madi Kubik match.

The junior outside hitter for the ninth-ranked Husker volleyball team continued her tear through the Big Ten Conference with 19 kills in a 25-21, 25-15, 25-19 win at the Devaney Sports Center.

Nebraska’s 8-0 start to the Big Ten season includes six sweeps and no five-setters. And that streak immediately followed a three-match losing streak and some “come to Jesus moments” for the Husker players.

While the Huskers will still need to prove themselves against a string of ranked teams like the ones that beat them earlier in the season, Nebraska has taken a big step forward the past month.

“I don’t know, I just feel like we’re getting better every week,” Kubik said. “I feel like every time we come into the gym, there’s improvement in some area. And everyone comes in with a focus and an intention that is really exciting, because I think it’s going to make us really, really good. I kind of just feel like we’re flowing."

Kubik’s 19 kills were 12 more than any other player in the match. She had just three errors for a season-best .457 hitting percentage. Lindsay Krause was next for the Huskers with seven kills. Lauren Stivrins had five.

Kubik feels like the entire team is playing better and with more trust in each other, and she’s just doing the same.

“I feel like I just keep saying it, (but) we’re establishing a level of trust that makes us feel. … I don’t know, I feel invincible,” Kubik said.

Time after time Kubik kept abusing the Illinois blockers with shots off their hands.

She’s got a few things in her “tool box” of shots, but tooling the block is probably the most effective.

“That’s something in our tool box of things that we do to get kills,” Kubik said. “We train that every single day. It’s just understanding the situation, and seeing what’s available.”

Kubik was also efficient on back-row attacks, which don’t usually produce such a high success rate.

Husker libero Lexi Rodriguez has a great view of most of Kubik’s kills from just a few feet behind her. She can sense the confidence Kubik is playing with.

Kubik has had at least 10 kills in eight straight matches, and ranks No. 2 in the Big Ten in kills since the league season began.

Her 19 kills equaled her season high from two other matches, but those were each in four-set matches.

Nebraska finished with a .267 hitting percentage, and held Illinois to .100. The Husker defense has held three straight opponents under .115 hitting.

Kubik was great from the start again, putting down six of Nebraska’s 11 kills in the first set.

During a 5-0 run in the first set, served by Keonilei Akana, Kubik had four kills, with all but one with a shot she hit off the blockers’ hands.

“We expect that from Madi, and she’s capable of that,” Cook said. “And I think Nicklin gave her some great sets tonight. She got her openings, and one-on-ones.”

Kyla Swanson, a junior from Wahoo, started at middle blocker for Illinois (12-7, 4-4 Big Ten). She had six kills and a match-high five blocks. 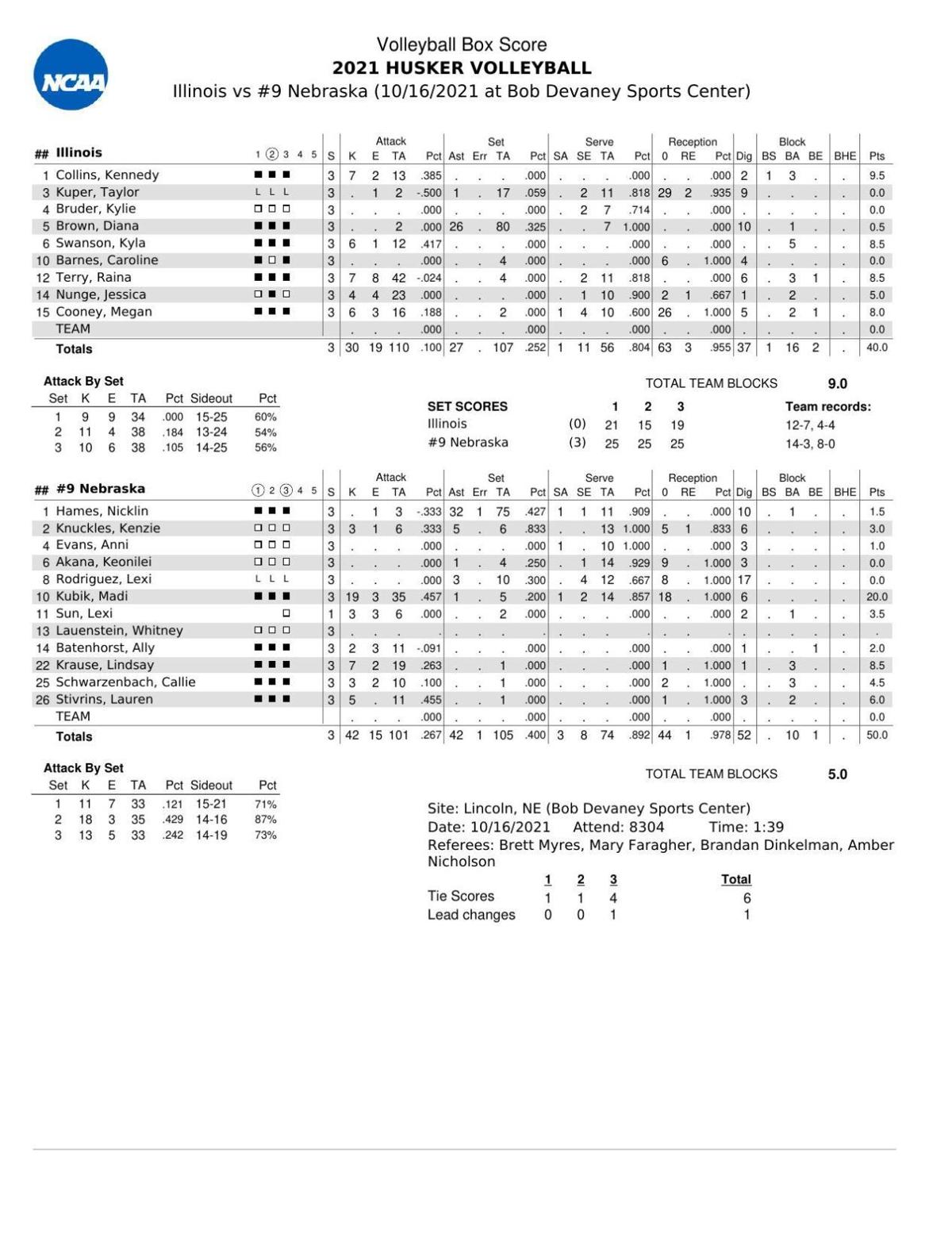 'This is why you come to Nebraska:' After early slide, Huskers have shot to win Big Ten title

The winner of Friday’s match between No. 5 Wisconsin and No. 11 Nebraska will clinch at least a share of the Big Ten title.

'They should feel really proud': Nebraska finishes regular season with win against No. 6 Purdue

The Nebraska volleyball team will go into the NCAA Tournament with one of its best wins of the season.

The start was encouraging, but, in the end, the Huskers' chances of winning a Big Ten title this season took a major hit.

Huskers earn No. 10 seed for NCAA Tournament, will host Campbell on Friday

Once Kayla Caffey started visiting schools as a college student, she knew she was in the right place.

A few Maryland players took a knee during the national anthem, and a few spectators yelled "stand up," which could be heard throughout the arena.

Why Nebraska's volleyball match vs. Rutgers on Saturday is canceled, and what it means moving forward

The match will go down as a forfeit for Rutgers, and Nebraska will be credited with a win in the Big Ten standings. But, it would help NU's RPI.

Nebraska's Madi Kubik hits against a block by Illinois' Kennedy Collins's (1) in the first set Saturday at the Devaney Sports Center.

Nebraska's Kenzie Knuckles can't quite get a hand on the ball as she dives for a  ball in the second set of the Huskers' match against Illinois on Saturday at the Devaney Sports Center.