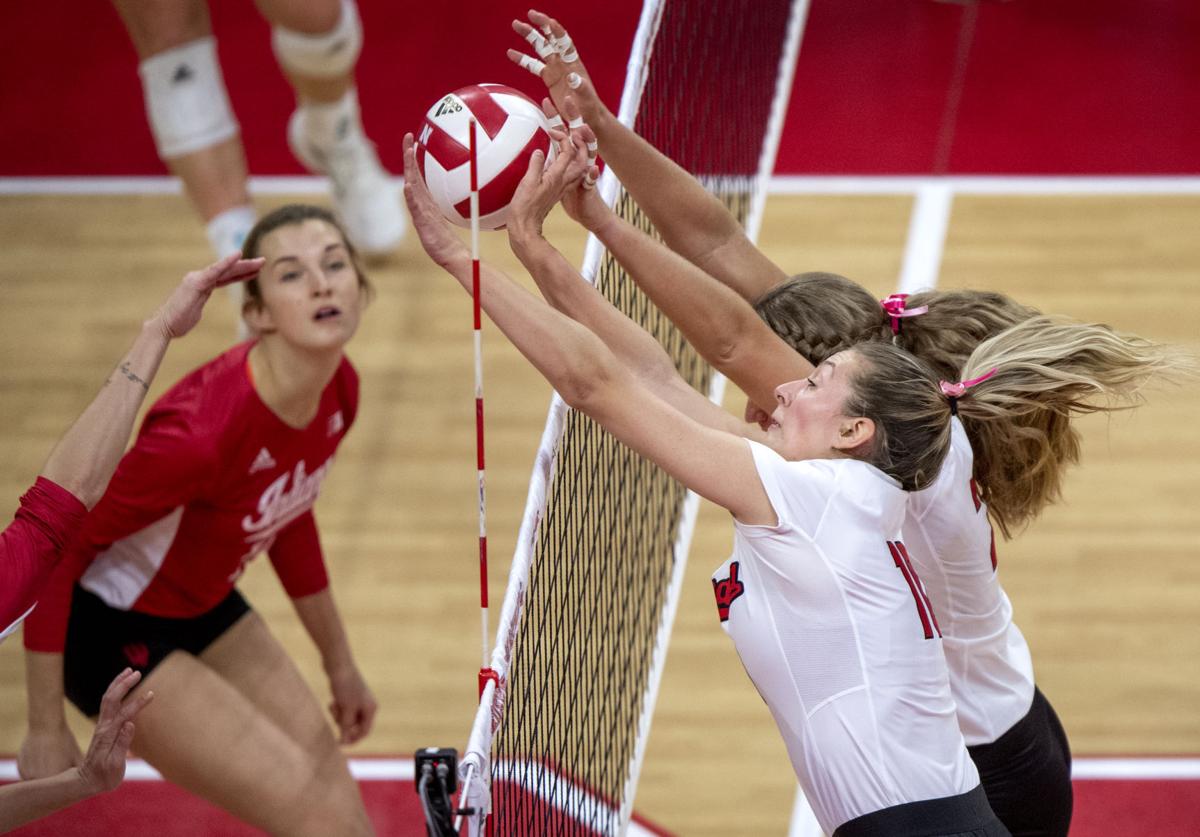 Nebraska’s Madi Kubik (foreground) and Callie Schwarzenbach combine for a double block for a point as Indiana's Savannah Kjolhede (left) looks on in the first set Wednesday at the Devaney Sports Center. 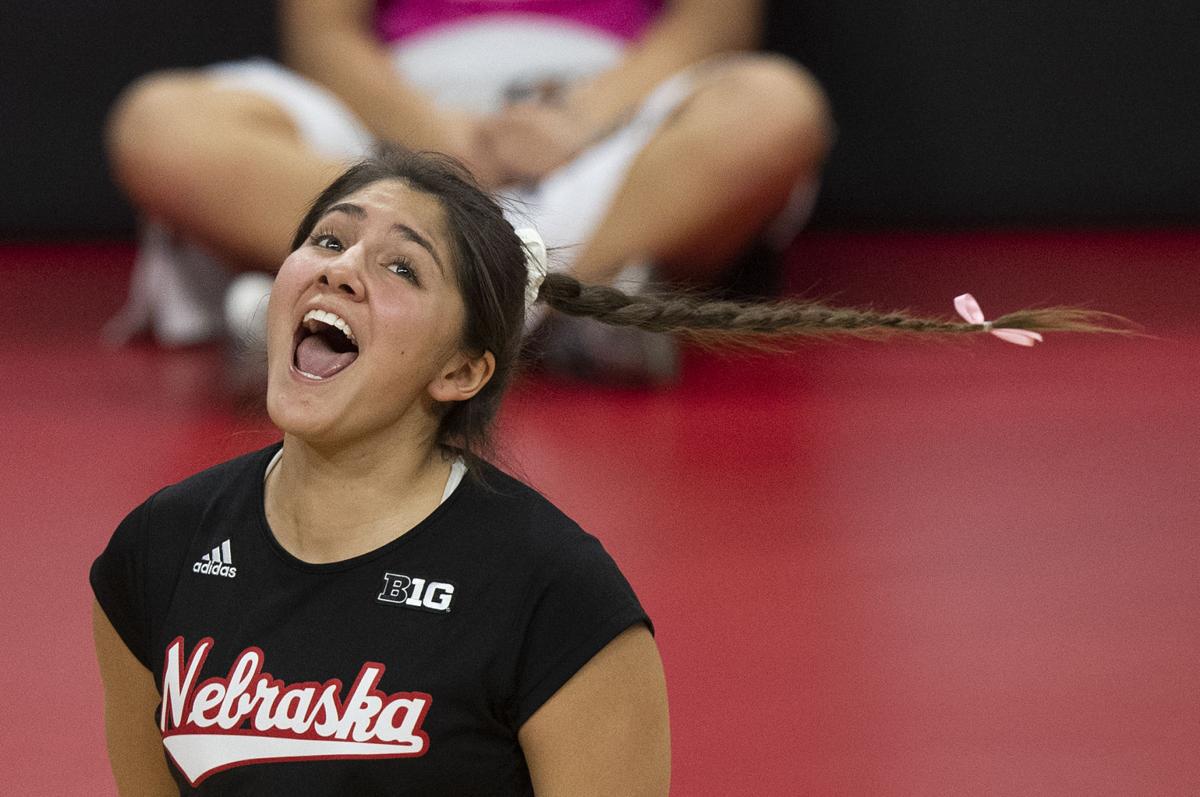 Nebraska’s Lexi Rodriguez (8) celebrates a Husker point in the third set against Indiana on Wednesday, Oct. 13, at the Devaney Sports Center. 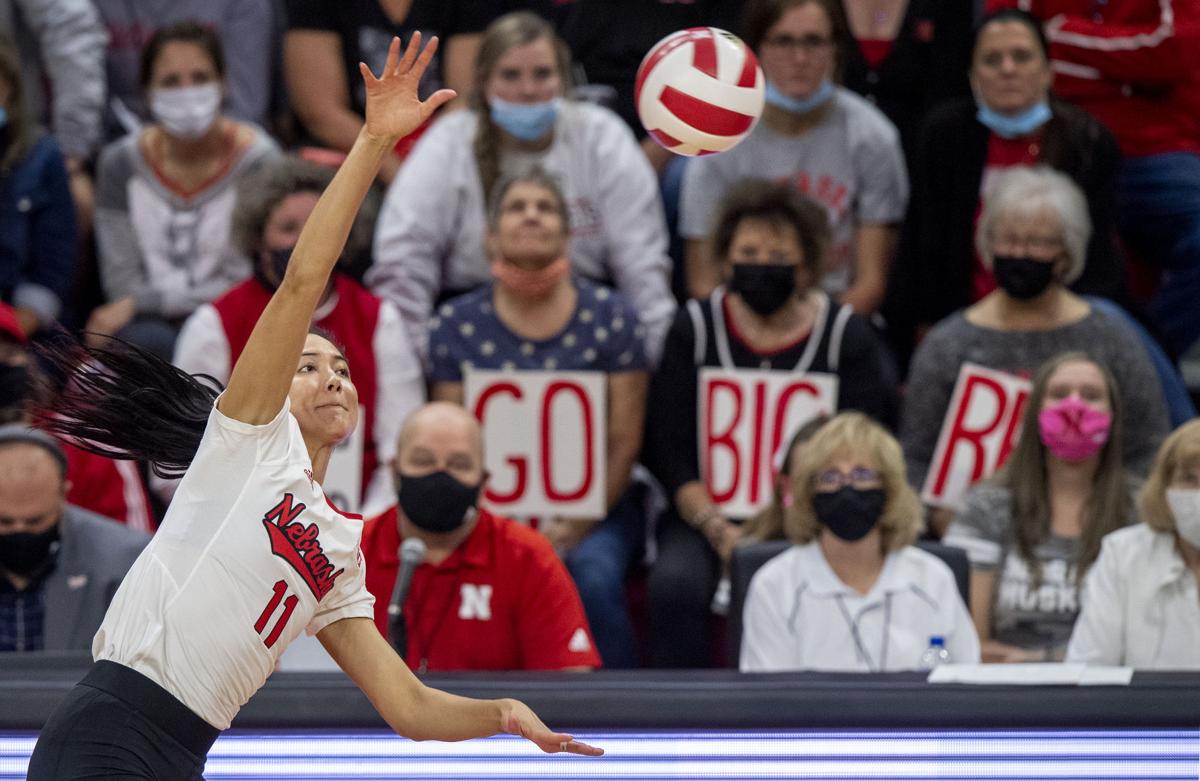 Nebraska’s Lexi Sun attempts a kill in the third set against Indiana on Wednesday, Oct. 13, at the Devaney Sports Center.

The winning streak for the Nebraska volleyball team has reached seven.

Nebraska matched its longest winning streak of the past three seasons. The Huskers sit atop the Big Ten standings at 7-0.

In its past two matches, against Rutgers and Indiana, the opponent hasn’t reached 20 points in any set, and the good times continue to roll for the Huskers.

“I really like the level of trust we’re playing with,” said Husker outside hitter Madi Kubik. “I think that makes us feel very free when we go out there and comfortable next to each other and allows us to play our best volleyball.”

Nebraska dominated Indiana (8-11, 2-5 Big Ten) for most of the match, finishing with 46 kills while limiting the Hoosiers to 23.

Nebraska hit .367, its second-best mark of the season, and held Indiana to .057 hitting.

Nebraska losing this match would have been a shock, but it had some reasons not to be as sharp. Nebraska had only one practice this week after a long road trip last weekend, it was a late start, 8 p.m., Indiana isn’t ranked and Nebraska didn’t have explosive middle blocker Kayla Caffey due to illness.

But Nebraska playing well is another sign of the improvement of the team during the past four weeks. Cook said team captains Nicklin Hames, Lauren Stivrins and Kenzie Knuckles made sure the Huskers were prepared to play well.

“They understand what has to happen,” Cook said. “And I think they’re doing a good job of making sure the freshmen understand that.”

The great start to the Big Ten season for Kubik hasn’t stopped yet. She led the Huskers with 16 kills on .308 hitting.

Kubik has led the Huskers in kills in seven straight matches. During the Big Ten season, her 4.25 kills per set rank third in the Big Ten.

Freshman right-side hitter Lindsay Krause added 10 kills on .400 hitting. She had a hot start to the match that included kills on five of her first eight attempts without an error.

The other freshman hitter, Ally Batenhorst, had five kills and hit .714.

Middle blocker Calllie Schwarzenbach had three kills on just four attempts. One of the teaching points from the match is that Schwarzenbach should have played more sets, Cook said.

But Cook was impressed with the nine set assists for libero Lexi Rodriguez, who has to set when Hames digs a shot.

“There are a lot of ways to kill a ball, and we always say everybody is a setter,” Cook said.

Hames had 13 digs. Knuckles led the Huskers with 14 digs, along with her two kills on back-row attacks. Hames also had three kills.

Nebraska dominated the latter part of the first set, winning 10 of the final 14 points for a 25-13 win. Kubik had eight kills in the set, which was one more than the entire Indiana squad.

Nebraska sophomore defensive specialist Keonilei Akana always seems to be good for one long serving run per match, and on Wednesday that occurred in the second set. The set was close before Akana served a 5-0 run for a 9-4 lead. She also served a 4-0 run during the third set.

Nebraska’s Madi Kubik (foreground) and Callie Schwarzenbach combine for a double block for a point as Indiana's Savannah Kjolhede (left) looks on in the first set Wednesday at the Devaney Sports Center.

Nebraska’s Lexi Rodriguez (8) celebrates a Husker point in the third set against Indiana on Wednesday, Oct. 13, at the Devaney Sports Center.

Nebraska’s Lexi Sun attempts a kill in the third set against Indiana on Wednesday, Oct. 13, at the Devaney Sports Center.