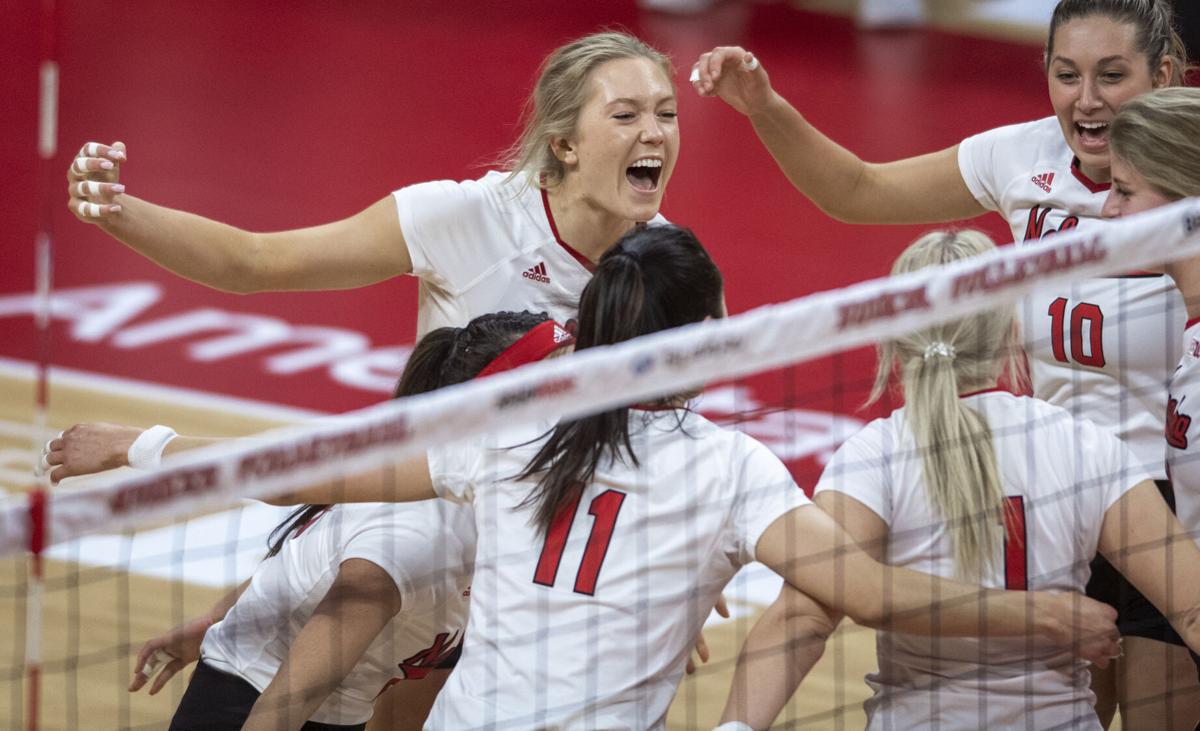 Nebraska’s Lauren Stivrins (top left) celebrates a kill in the third set against Iowa on March 20 at the Devaney Sports Center. 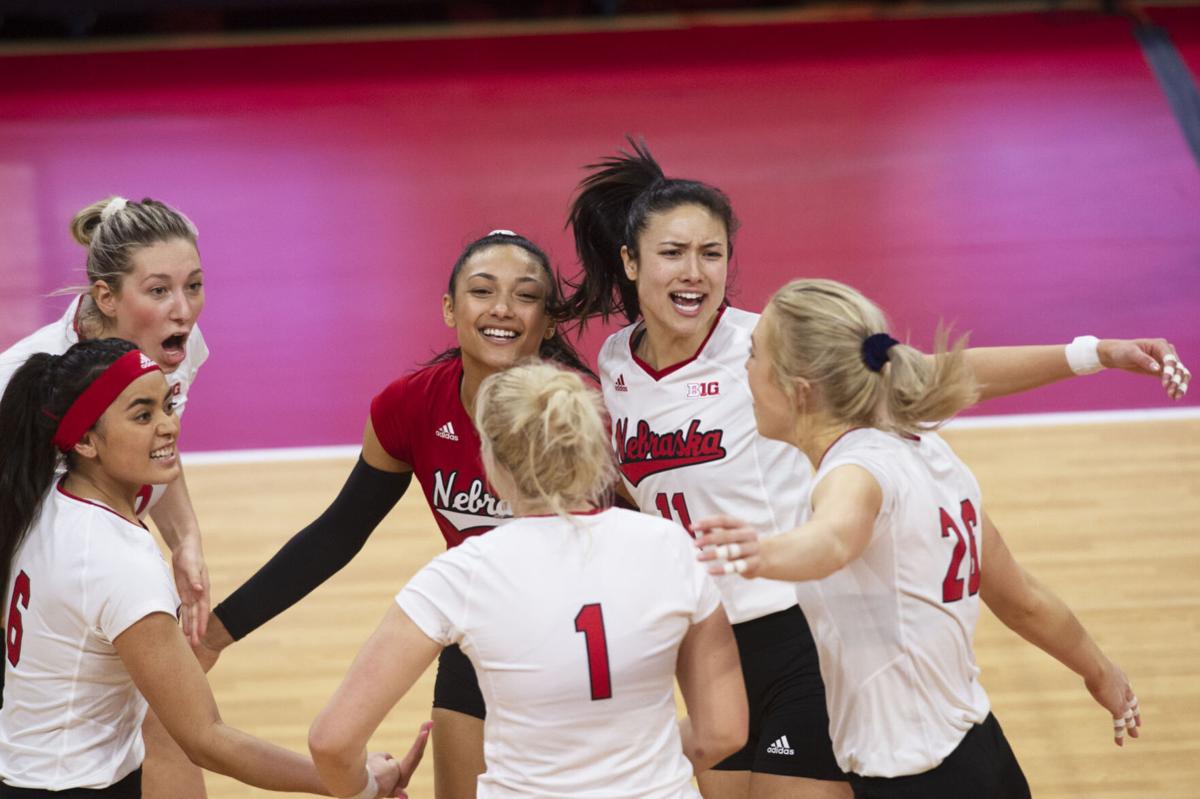 Nebraska's Kenzie Knuckles (center) and Lexi Sun (center right) celebrate with their teammates after a kill by Lauren Stivrins (right) in the first set against Minnesota on Feb. 21 at the Devaney Sports Center. Nebraska's roster features 10 scholarship players from out-of-state.

“As someone who is not really from Nebraska, and not many of us are, it’s so cool to see how you guys all appreciate volleyball and support us.”  — Nebraska volleyball player Lauren Stivrins, addressing the crowd at a 2019 spring match in McCook.

Most Nebraska volleyball fans probably don’t think much about where the players come from.

They just love the way Lauren Stivrins smashes the ball, the joy that Lexi Sun and Madi Kubik play with, how fired up Nicklin Hames and Stivrins get after they team up for a big kill or block.

Some of the Huskers are a long way from home — an ocean away in the case of Hawaii's Kaylei Akana. But for some of the best and most competitive high school volleyball players in the nation, the road leads to Lincoln, no matter the distance or any pressure they may feel to play for a school closer to home.

This season, Nebraska’s starters are from Arizona, California, Tennessee, Iowa, Illinois, Indiana, Hawaii and Kansas. After the players arrive in Lincoln, though, they’re Nebraska’s team, and part of one of the most respected and adored sports teams at the university.

This week the Huskers made the short trip to Omaha and were joined by hundreds of the other top players in the nation for the most unique NCAA volleyball tournament ever, with all 47 matches being played under one roof at CHI Health Center Omaha. The tournament will stretch over 11 days before the national champion is crowned next Saturday.

Most of Nebraska's 22 sports teams have a lot of out-of-state players, but this season is really something for the volleyball program, with 10 of the 11 players who play the most coming from out of state. The exception is Malcolm’s Hayley Densberger.

Some of Nebraska’s all-time great volleyball players are from the state, but Nebraska’s recent run of success has been fueled by being able to recruit in a big way nationally. Seven of the Huskers’ past eight All-America awards were won by out-of-state players, including Stivrins and Sun.

It’s interesting to think about the Nebraska volleyball coaches being able to go to several different states to get players, in relation to the passionate discussion about in-state recruiting for the Nebraska football program.

It was just a few weeks ago when the latest recruiting news in the state had people buzzing, when Kaden Helms, a tight end from Bellevue West and one of the top football prospects in the state, put out a top-10 list that didn’t include the Huskers.

There was disappointment that he probably won’t play for Nebraska. Some consider it an indictment of the Nebraska football coaches, even though Nebraska has gotten most of the in-state players it recruited. It was a similar conversation when Xavier Watts committed to Notre Dame and Avante Dickerson to Oregon.

But in volleyball Nebraska has built a championship program in part by getting some of the best players to do the same thing — leave home. The Huskers have six top-20 recruits on the roster, and none of them are from Nebraska.

Of course, unlike in college football, where many schools play in front of huge crowds and have fancy facilities, Nebraska volleyball benefits from there only being a few programs in college volleyball that are comparable to the Huskers when you consider the combination of fan support, facilities, coaching and tradition.

And during the formative volleyball playing years of the current Huskers, only four teams have won national titles — Stanford, Nebraska, Penn State and Texas. Stanford and Nebraska have combined for the last five.

Many states don’t have a volleyball program that comes close enough to what Nebraska has to make players like Stivrins, the No. 9 national recruit, stay home for college. If you’re going to work really hard on something, you want to do it somewhere where it matters, and it does in Lincoln.

Stivrins is from Scottsdale, Arizona, near volleyball programs in Tempe (Arizona State) and Tucson (Arizona).

But college volleyball isn’t that big there. When she told some friends she was going to play for Nebraska, they asked if that was a Division I school. It is, Stivrins said, and they win national championships.

“I don’t think anyone was disappointed, and pretty much everyone on my club team went out of state,” Stivrins said. “We were all kind of going our separate ways and doing our own thing.”

At the time she was making her choice, the schools in Arizona couldn’t provide everything she wanted from her college volleyball experience.

“I just wanted to go somewhere where I knew I was going to be pushed to be the best that I can be,” Stivrins said. “And I knew that coach (John) Cook was going to do that and he’s the best coach out there, even though I hate to admit it sometimes. I hate when he’s right, but he usually is.”

Stivrins also had ties to Lincoln, where her dad, Alex, grew up.

One of the things Stivrins has loved seeing during her five years in Lincoln is how the volleyball program brings people together.

“Even the people that aren’t (at matches), they get to have a reason to say, ‘Oh, come over tonight and watch the game with us,’” Stivrins said. “It’s just a really cool experience, and I’m glad that we get to be a part of that and we get to make it happen.”

Sun was the No. 1 recruit in the nation in her class but twice turned down the top programs in her home state of California, such as USC and Stanford. First, she went to Texas, and then she transferred to Nebraska.

“I felt like people were more surprised that I didn’t stay,” Sun said. “But I think that they understand why I’m here. Especially when they see the program here and the culture here and kind of better understand Nebraska volleyball, then it all makes sense to them.”

Hames, the No. 4 national recruit in her class, felt like some people were bummed that she didn’t stay home and play for Tennessee. They ask her, "Why Nebraska?"

“It’s just that the volleyball here is unmatched,” Hames said. “A lot of people don’t understand Nebraska until you bring in the volleyball aspect of it.”

Kubik was also the No. 4 national recruit for her class. If she had stayed home and attended Iowa State or Iowa, it would have made a huge difference for those programs, both on the court and in recruiting.

“I think Iowa, Iowa State and Northern Iowa definitely try and recruit two or three of the top kids in the state,” said Jeremy Mikesell, who coached Kubik at Valley in West Des Moines, Iowa. “But every once in a while you’re going to get those exceptional athletes like Mikaela Foecke or Mac May (UCLA outside hitter from Dubuque). I think we have some Iowa kids who are just above and beyond that level.”

The out-of-state Huskers appreciate that volleyball led them to Lincoln. Sometimes when new players arrive, Stivrins tells them not to take this opportunity for granted.

“There are thousands of little girls in Nebraska that would die to be in our positions,” Stivrins said. “So just take every day as a gift, and work as hard as you can to make this state proud.”

The first step to being an All-American is making one of the 10 all-region teams, which four Huskers did Tuesday.

Nebraska’s Lauren Stivrins (top left) celebrates a kill in the third set against Iowa on March 20 at the Devaney Sports Center.

Nebraska's Kenzie Knuckles (center) and Lexi Sun (center right) celebrate with their teammates after a kill by Lauren Stivrins (right) in the first set against Minnesota on Feb. 21 at the Devaney Sports Center. Nebraska's roster features 10 scholarship players from out-of-state.