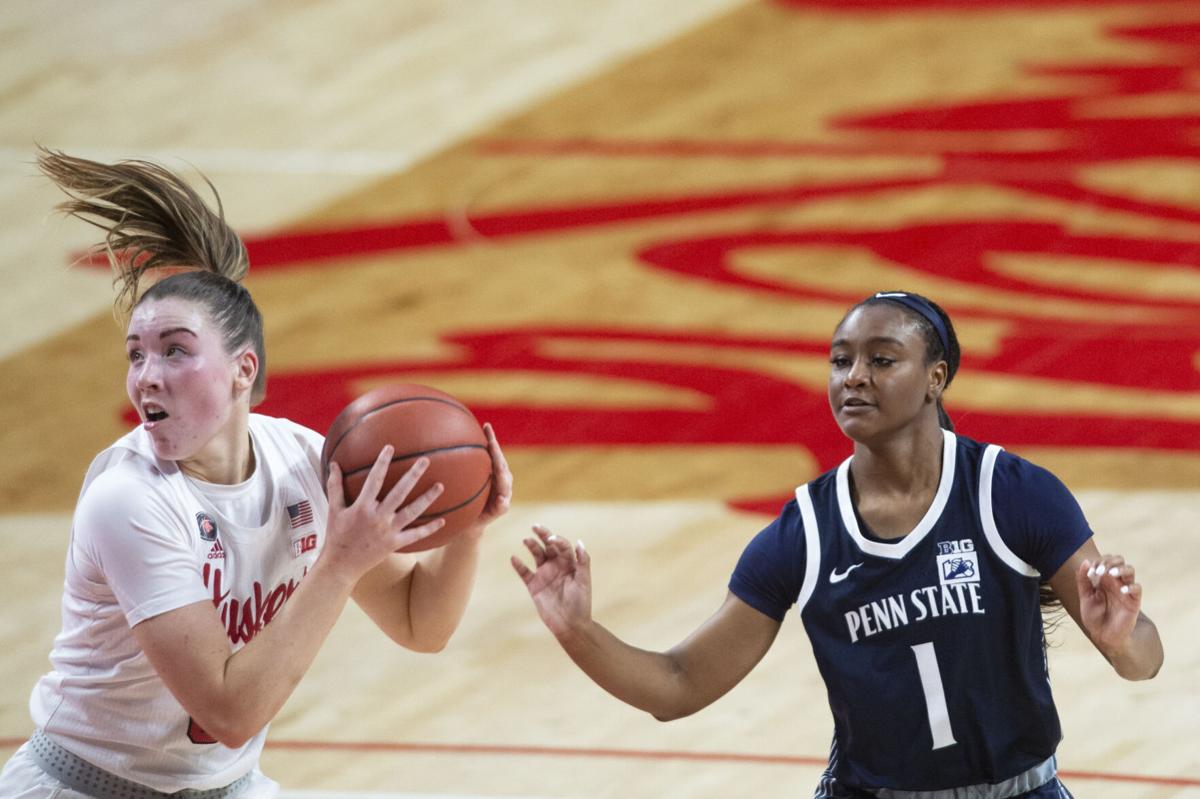 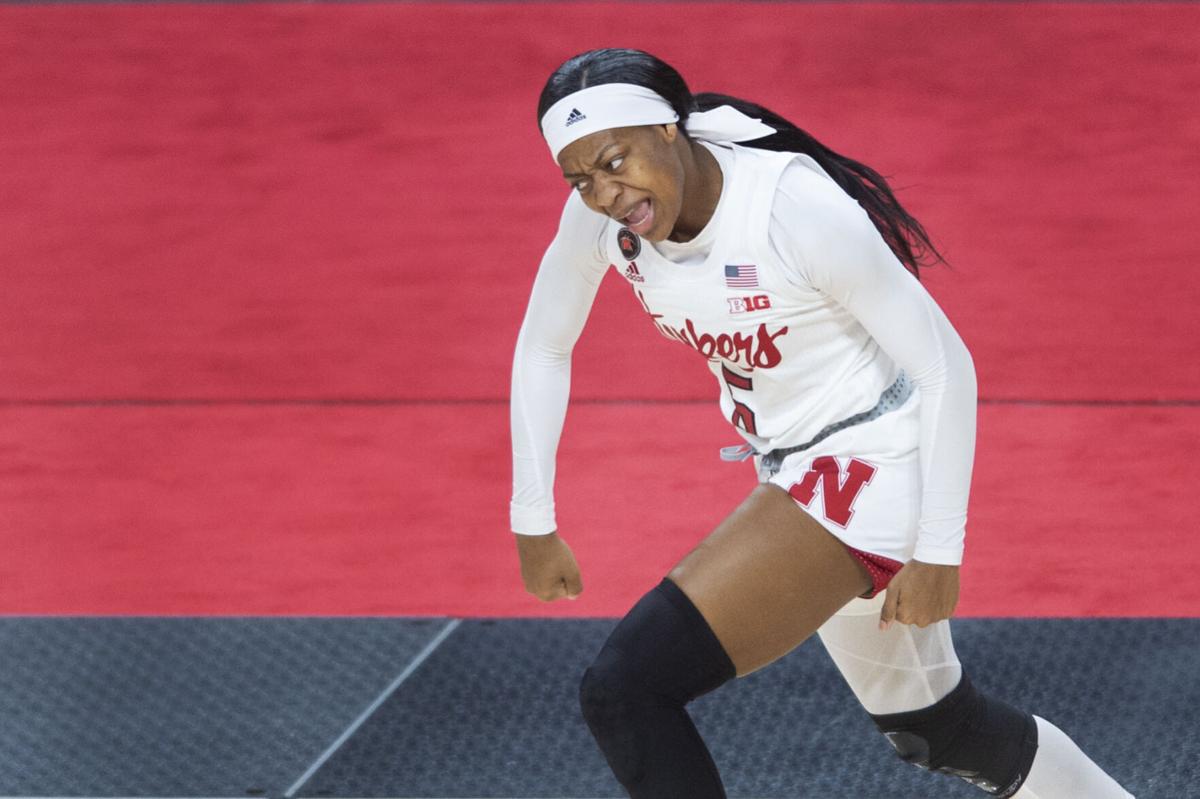 Nebraska's MiCole Cayton celebrates after making a three-pointer under pressure in the third quarter Sunday at Pinnacle Bank Arena. 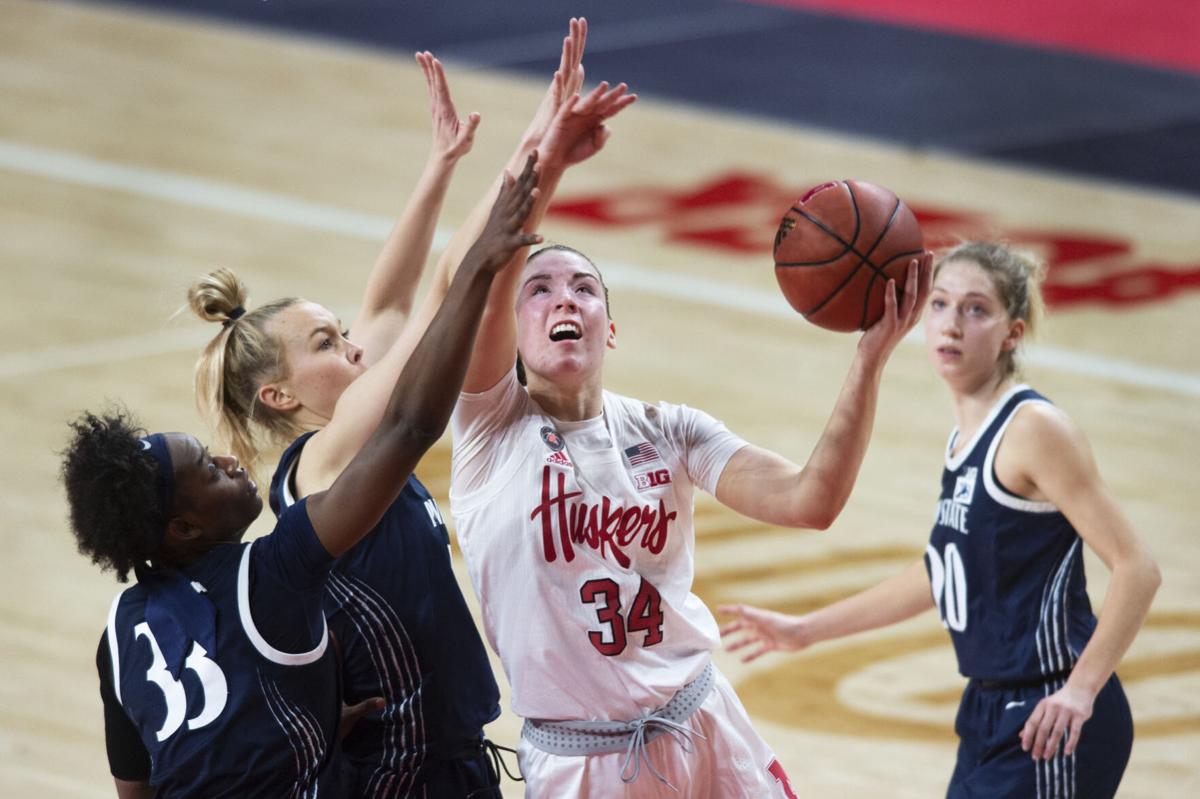 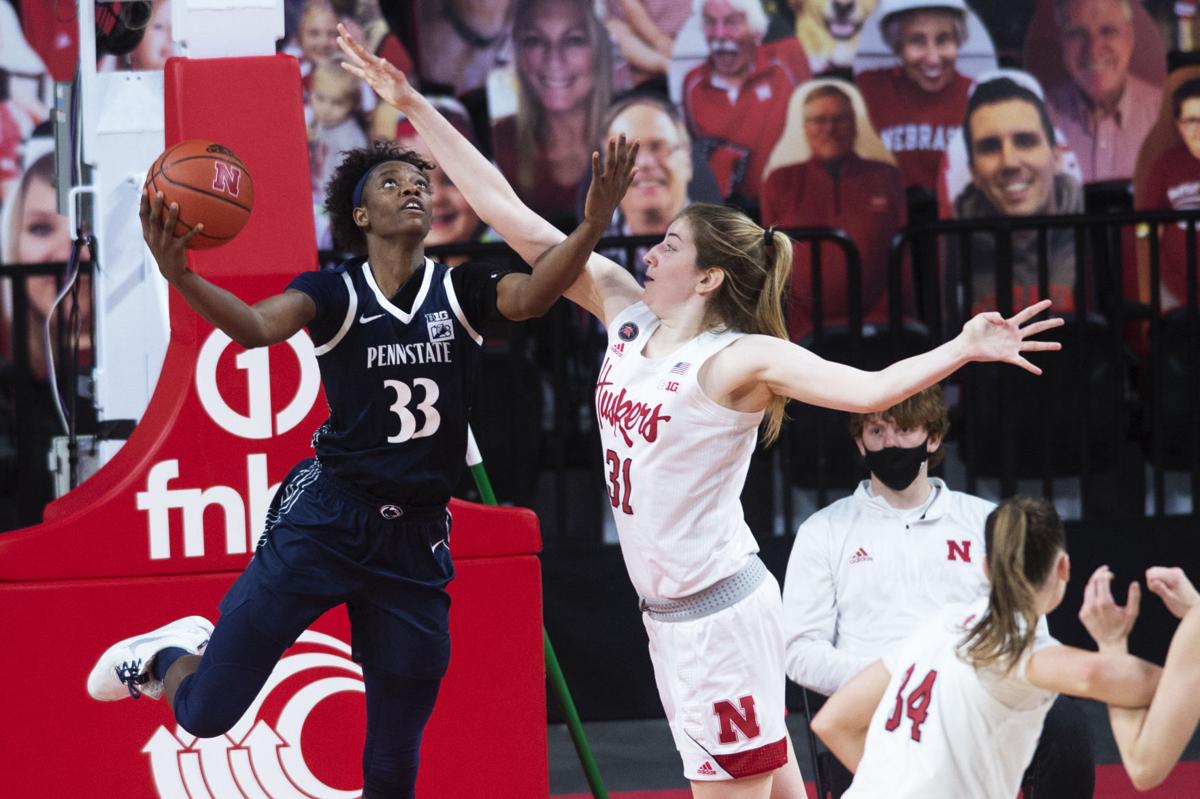 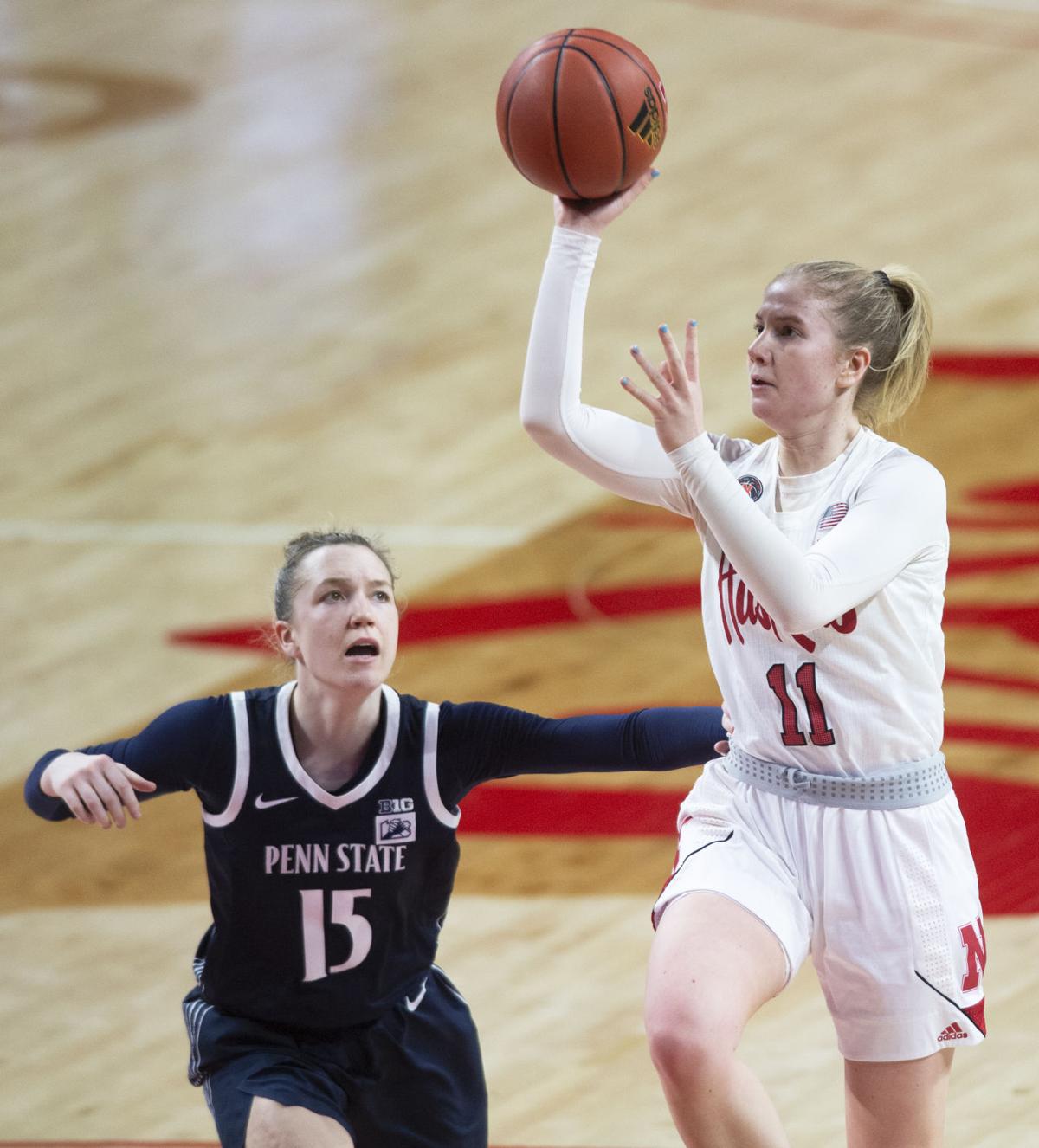 Penn State's Maddia Burke (left) guards Nebraska's Ruby Porter as she goes in for a layup in the second quarter Sunday at Pinnacle Bank Arena.

You never know when a hot stretch of shooting is going to start.

For Nebraska on Sunday afternoon at Pinnacle Bank Arena, a layup from freshman reserve forward Annika Stewart with 3 minutes, 23 seconds left in the first half was a nice development — it got the Huskers within two points of visiting Penn State — but it didn't seem like much more than that.

Then she poured in eight more to power a 12-2 run into intermission, including a pair of three-pointers.

That was just the start for the Huskers, who expanded a six-point halftime lead into a 16-point advantage through three quarters with a torrid shooting stretch and knocked off Penn State, 87-72. The victory moved Amy Williams' team back above .500 in Big Ten play at 9-8 and to 11-9 overall. The Huskers made 13 three-pointers overall, tied for fourth-most in a single game in school history.

"I told the girls in the locker room after the game I felt like this was maybe our most complete game," Williams said. "Just top to bottom had contributions from a lot of different places. I know we've had four wins over ranked opponents, but to me, with the way we lost at Penn State and just knowing that there were some transition issues and matchup things we needed to square up, I was really proud of the way our team adjusted."

Spanning the final 3:23 of the second quarter and all of the third, NU knocked down 13-of-18 from the floor and 7-of-8 from three-point range.

Much of that damage came from sophomore guard Ashley Scoggin and sophomore forward Isabelle Bourne, but plenty of others chipped in with production, too.

The result: NU outscored PSU by 20 points in that critical midgame run.

Bourne poured in 22 points, Scoggin finished with a career-best 18 points and Haiby matched that mark as five Huskers scored in double figures.

Bourne turned in her third consecutive double-double, following up a monster 21-point, 17-rebound performance in an upset victory over No. 21 Northwestern last Wednesday with 22 and 11 rebounds Sunday against the Nittany Lions.

Said Scoggin, "Going inside to Izzy (Bourne) and Kate (Cain) today, they couldn't stop either of them."

It was Scoggin, though, who carried some of the offensive load early on. She entered the day averaging 7.3 points per game but had 13 in the first half alone to go along with five assists. The junior college transfer got others involved and knocked down three of Nebraska’s seven first-half three-pointers.

"I definitely felt very comfortable," Scoggin said after topping her previous best offensive output by two points. "I kind of felt like I was on autopilot. I was just out there playing and having fun."

Cain (11 points) had good looks in the first half but converted just 1-of-5 while battling down low with talented PSU post Johnasia Cash (17 points, 13 rebounds). Cash dominated with 27 and 19 in the first meeting, but NU's posts made her work hard for her production this time around.

"Isn't that crazy? She still scored 17 points and got to the free-throw line 11 times and yet we felt like we did a much better job on her this time around," Williams said.

Nebraska came out in the third quarter intent on feeding Cain and Bourne in the post and they scored NU's first eight out of the break.

PSU guard Maddie Burke (20 points) knocked down her second three-pointer of the third quarter and one of PSU's 11 overall to get the visitors within 47-45, but Scoggin and Haiby responded with back-to-back threes for the Huskers to run their lead out to 54-45 and force PSU head coach Carolyn Kieger to take a timeout with 4:55 remaining in the frame.

NU controlled the game from there.

For Haiby, who entered as Nebraska's leading scorer, the left-wing three-pointer was just her second field goal on the afternoon. Haiby got it going, though, scoring 15 after the break and finishing with 18, eight rebounds and six assists.

"Especially after the last couple games I had, not seeing the ball go in the hole a lot, Coach always says if you're not scoring, there's other ways you can contribute to the team," Haiby said.

PSU did affect Nebraska at times with its willingness to pressure full-court and push the tempo even after made baskets, but the Huskers handled it far better than they did during an 85-74 loss to the Nittany Lions earlier this month on the road.

"It started with our communication defensively," Scoggin said. "Even when there was a sub, we'd all be talking to each other about who was the 5, who was the 4, who the guards were.

"We did a lot better job at controlling our tempo." 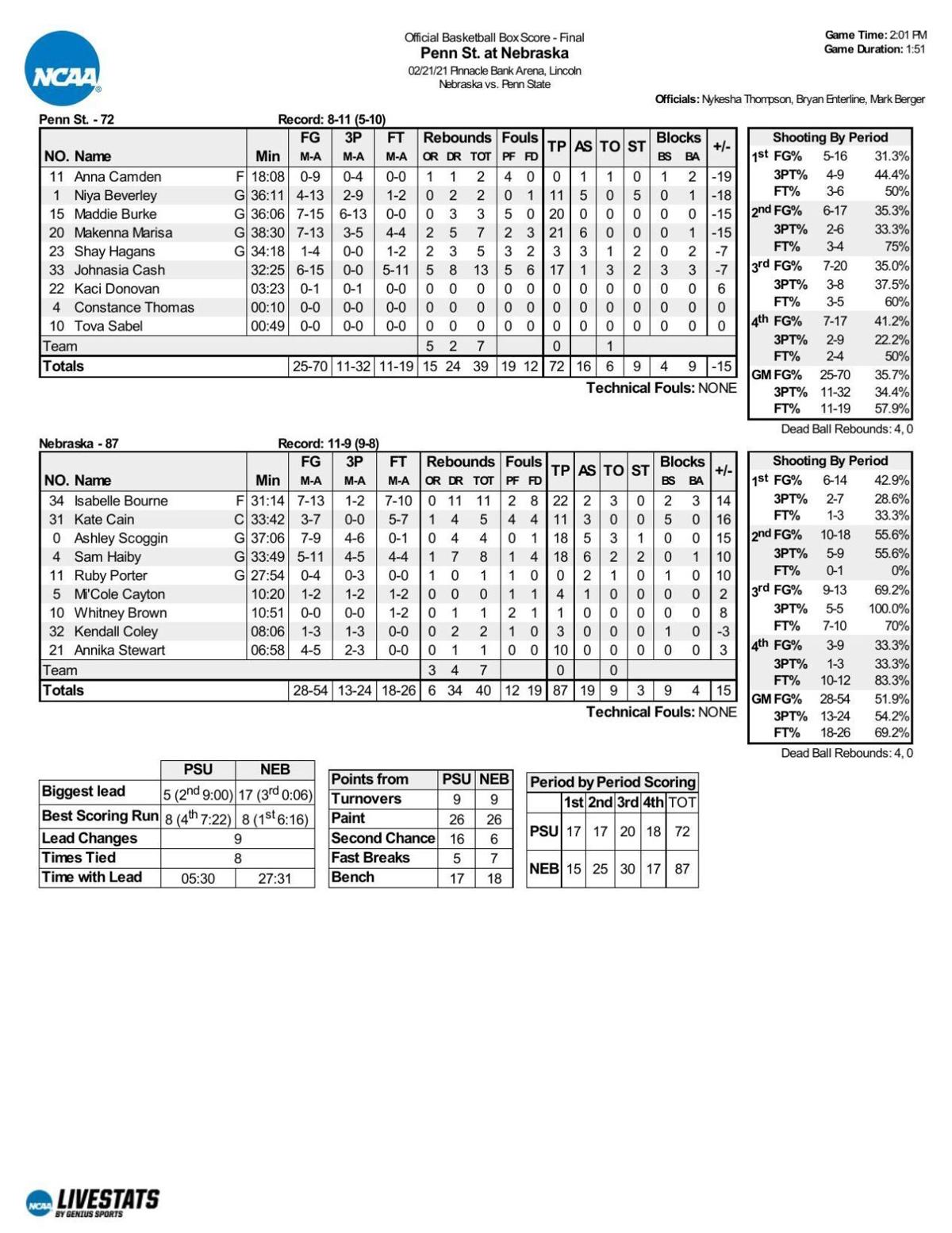 A day in the life of former Norfolk boys hooper Christian Eisenhauer, a four-year practice player for the Husker women

From daily COVID-19 tests to studying opponent's film, here's the story on Christian Eisenhauer, a four-year stand-in for the Huskers.

Nebraska led by two points at the end of the third quarter. Then? Well, let Husker coach Amy Williams tell it.

Watch now: The latest twist in a pandemic season? A Senior Day with no game

There were concerns because earlier in the day Nebraska’s most recent opponent, Minnesota, postponed its game against Michigan.

Whether on the outdoor courts or inside after practice, Husker freshmen proving their will to work

Freshmen trio Annika Stewart, Ruby Porter and Whitney Brown all have their fingerprints on the Huskers this season.

Nebraska's MiCole Cayton celebrates after making a three-pointer under pressure in the third quarter Sunday at Pinnacle Bank Arena.

Penn State's Maddia Burke (left) guards Nebraska's Ruby Porter as she goes in for a layup in the second quarter Sunday at Pinnacle Bank Arena.