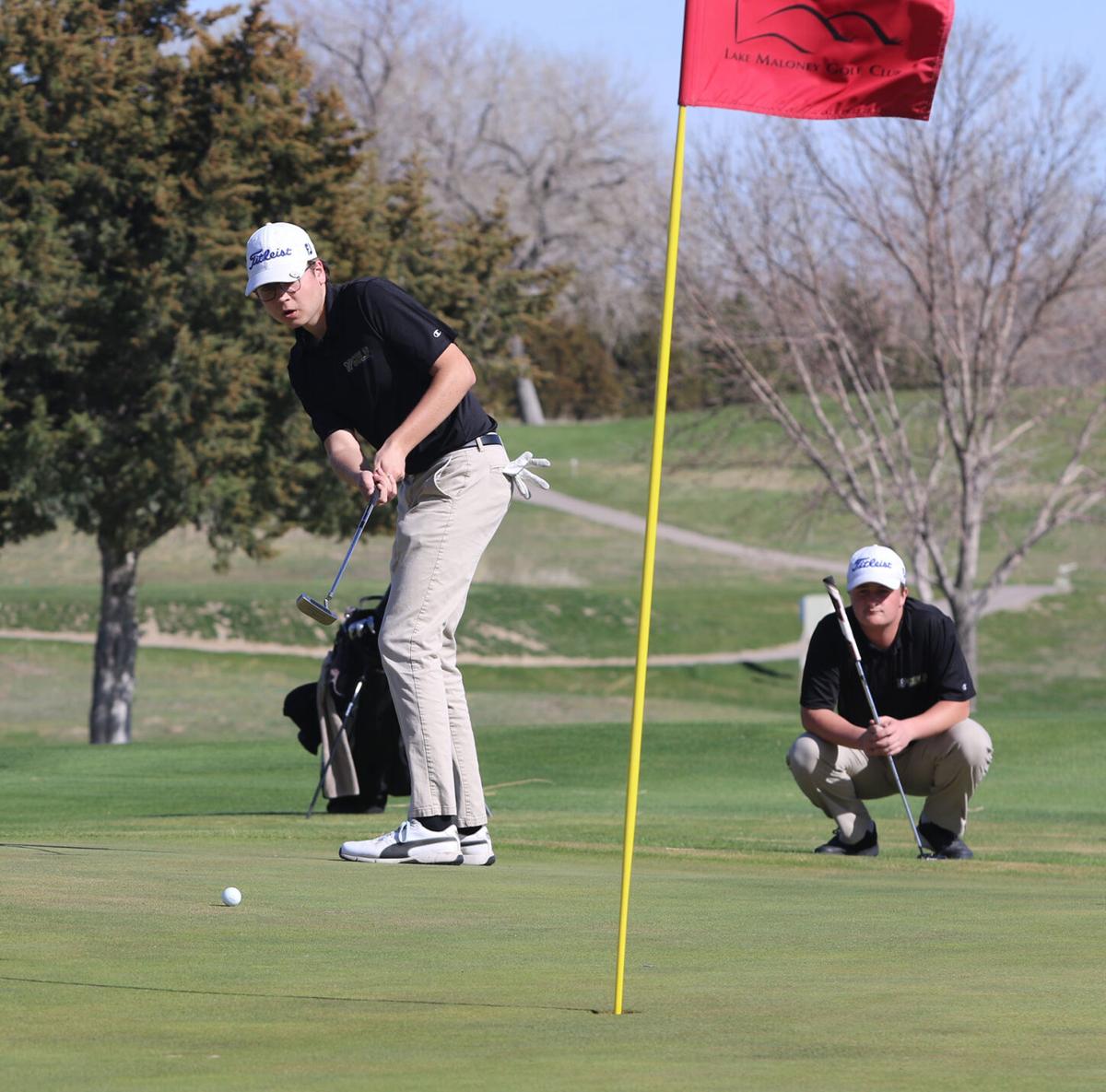 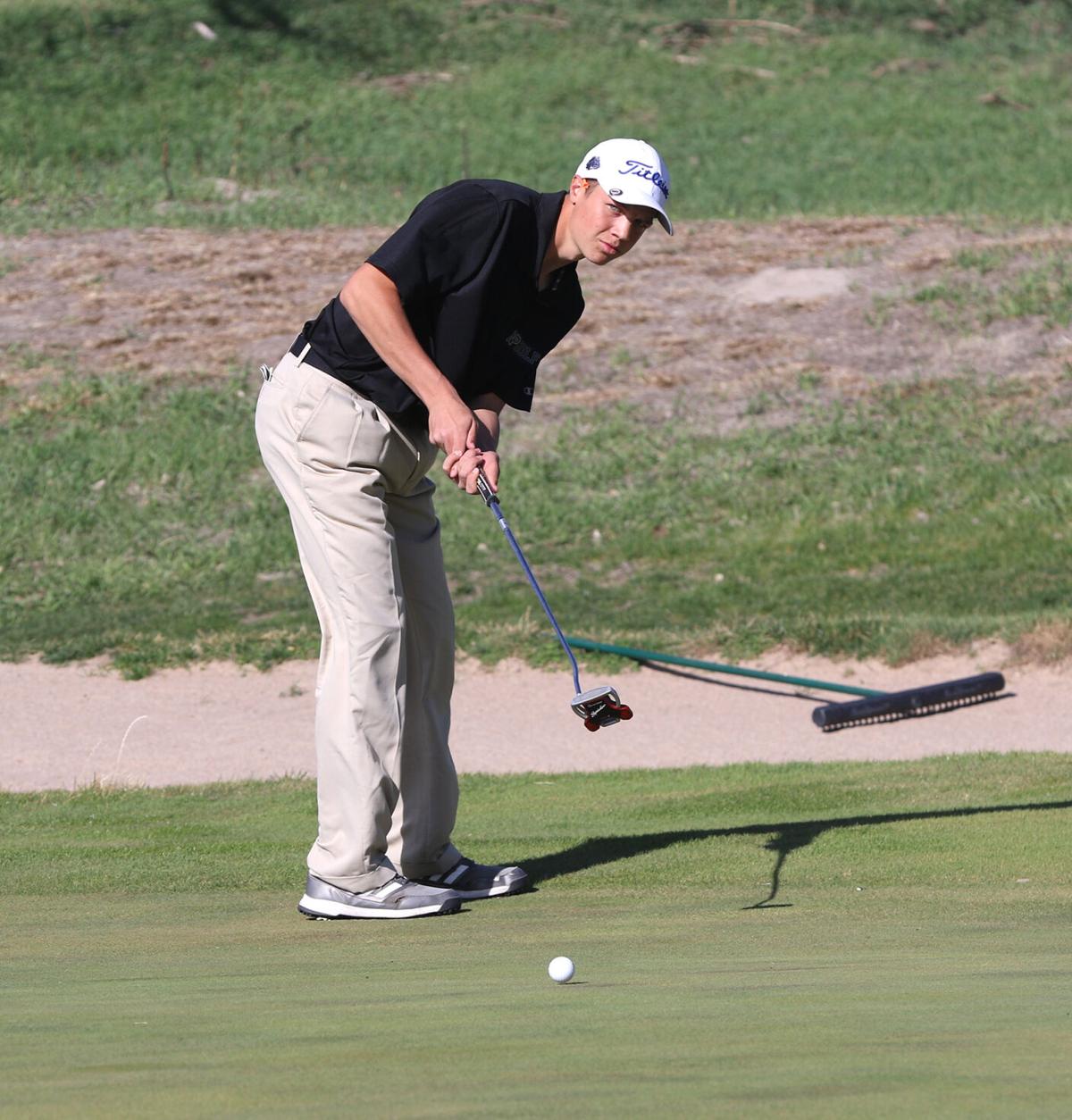 North Platte’s Blake Barner watches after hitting a putt Thursday afternoon during a boys golf dual with McCook at the Lake Maloney Golf Club. Barner finished with a score of 43 for a nine-hole round.

Neither the North Platte or McCook boys golf teams were at the top of their respective games on Thursday afternoon.

“It was kind of a battle of the mistakes out there today,” Bulldogs coach Jim Orcutt said. “It was a little disappointing. We made a few (mistakes) that we don’t need to make.

“We made some ball-striking mistakes that led to some penalty strokes, and we had a few putting errors that we normally wouldn’t have on this course.”

The two teams played from the tips Thursday, pushing the course out to its full 2,364 yards over the front nine — another added challenge.

“It’s a tough golf course from the blue tees and the kids battled around (on the course),” McCook coach Joe Vetrovsky said. “There some was wind early on (during the match) that definitely made some of the holes a lot longer, but I’m proud of the guys and how they got around (the course).”

McCook’s Payton Craw had the low-round of 40, a stroke better than North Platte’s Kasch Morrison.

Craw rebounded from a double-bogey on the second hole in which he said he, “duffed a few chips.”

“That was definitely my worst hole,” Craw said. “I had a few birdie attempts after that but I never capitalized on them.”

He added that driving off the tee wasn’t his biggest challenge, but rather his putting on challenging greens.

North Platte’s Blake Barner shot a round of 43 and said he struggled with his putting as well.

“The last couple of weeks I’ve been really good at putting but it was just a little bit of an off-day there,” Barner said. “Otherwise I was able to hit my irons so that I could still give myself chances to play decent.

“The greens were a little bit slower than they have been, and then I was just pulling a lot of putts today.”

The Bulldogs, who travel to an invite at Meadowlark Hills Golf Course in Kearney on Friday, were without two team members — Danny Phillips and Jesse Mach — both of whom were out sick.

“We had a few kids who had to play up to varsity to fill those spots tonight,” Orcutt said. “We have a few (varsity) experienced players with Blake and Kasch and then we have a couple other seniors who haven’t really got that much experience yet.”

McCook is led by experience with three seniors on the roster who were on the varsity squad as sophomores.

“We do have a lot of veterans back,” Vetrovsky said, “and that experience factor is something that we’ve really got to lean on here. That’s been a reason for our early success is those guys and their experience. We’ve just got to continue to improve and build off that.”

In an unprecedented season full of virtual meets and a boatload of questions, five of Legacy Dance and Gymnastics’ gymnasts are heading to the regional competition.

Ryan Phifer graduated from North Platte High School and played basketball for two years at North Platte Community College before transferring to the University of Nebraska-Lincoln.

The North Platte Community College Knights volleyball team is headed to nationals for the first time since 2010.

Brendon Walker battled through consistent winds, temperatures in the 30s and finished with an 18-hole round of 82 on Friday afternoon.

The Midwest Destroyers capped off its impressive run to the state competition with a fourth-place finish while 19 of it’s wrestlers earned medals.

Playing in a bowl game would've been the right thing to do for Nebraska's program, Deontai Williams says.

North Platte’s Blake Barner watches after hitting a putt Thursday afternoon during a boys golf dual with McCook at the Lake Maloney Golf Club. Barner finished with a score of 43 for a nine-hole round.