© 2021 Lee Enterprises
Terms of Service | Privacy Policy
Watch now: Erdman returns to fight ring with win; Jayson Scott moves to 2-0 as a pro with win at Salute to Veterans event
0 comments
Share this
{{featured_button_text}}
1 of 2 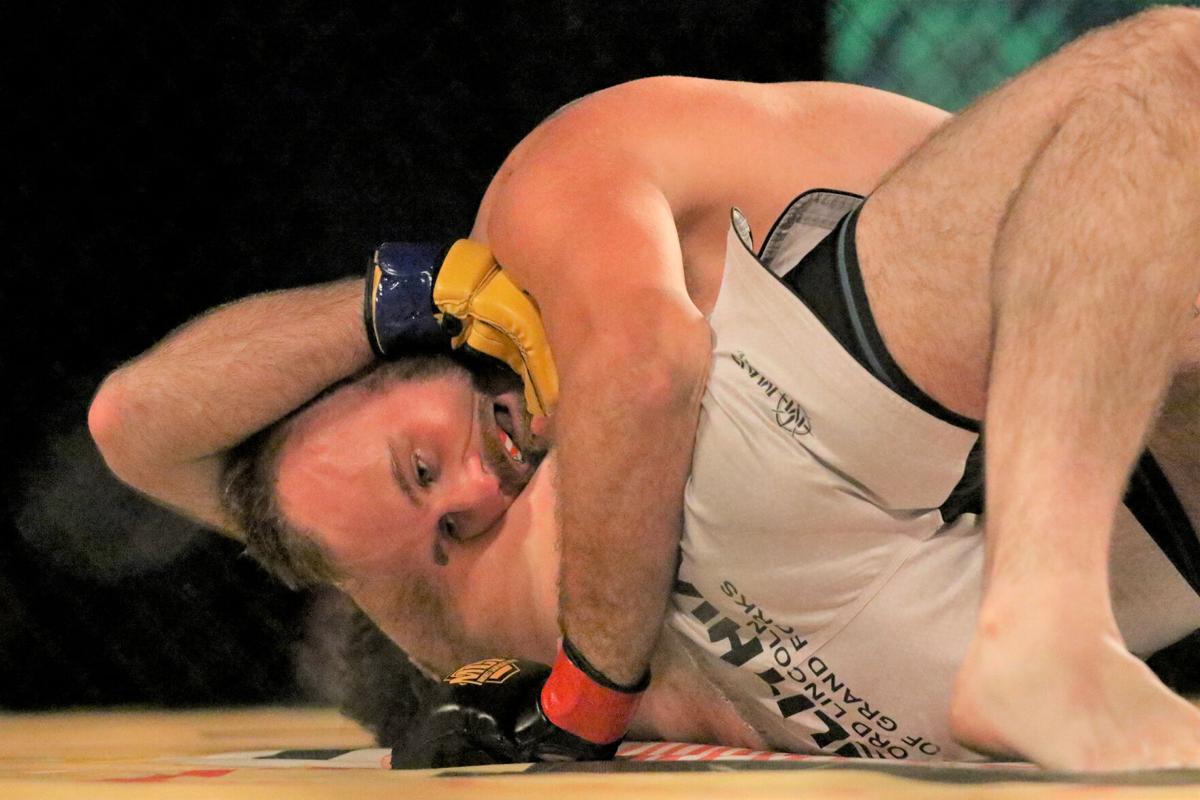 Bradan Erdman controls Chris Renwick during their light heavyweight match at the MCF 21 Salute to Veterans event on Thursday at the D&N Event Center. Erdman, making his first fight in three years, improved to 4-2 in the professional MMA ranks with a first-round knockout. 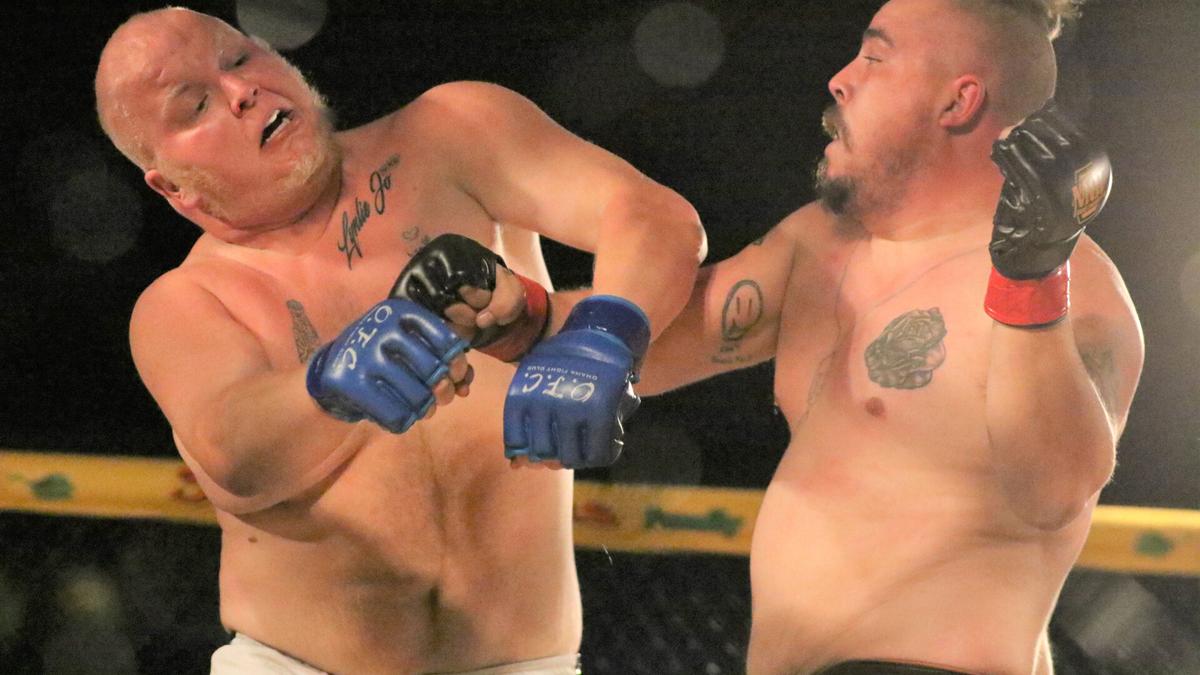 Shawn Rosenberg, left, tries to avoid a punch from Eric Adams at Midwest Championship Fighting’s Salute to Veterans event Thursday at the D&N Event Center. Rosenberg won on a first round knockout in the match between two North Platte fighters.

Bradan Erdman celebrated a win in his first MMA fight in roughly three years in the manner that he promised to.

He drank a Bud Light from a sneaker.

The 27-year-old light heavyweight slammed the beer in the middle of the octagon just after he knocked out Chris Renwick, of Grand Forks, North Dakota, just under two minutes into the first round of their main event matchup of MCF 21 on Thursday night at the D&N Event Center.

“We had a bet during this fight camp that if I got a finish (in the fight) I gotta do a ‘shoey,’” Erdman said of his celebratory drink. “I was like, ‘Hey, I’ll do it.’”

Erdman (4-2) was one of seven North Platte fighters who competed in the 13 amateur and pro fights that were on the Midwest Championship Fighting card. Jayson Scott improved to 2-0 as a pro as he stopped Justin Parker with a rear-naked choke, and Shawn Rosenberg stopped Eric Adams in the first round of an amateur matchup between two North Platte fighters.

A herniated disc sidelined Erdman from competition, the second major back injury he had sustained since high school.

“I honestly thought I was done,” Erdman said. “I broke down mentally, broke down physically. I thought that was it but it wasn’t. I got back (to training) and it felt great so I decided to give it another go.”

And the crowd seemed to appreciate his return as he received some of the loudest support on the night.

“Right now I plan on celebrating with my friends and family, drinking some beers and having a good ol’ time,” Erdman said. “Next fight I don’t know if it’s going to be here or out-of-state. I guess whoever is next, I’ll be ready to go.”

Scott said his next fight could potentially be in January, unless an opportunity comes around before then.

Parker was able to sweep Scott in the opening minute of the matchup and the North Platte native went down. He quickly regained his feet and controlled the rest of the match and got the submission at the 2:56 mark of the opening round.

“That’s definitely not how I pictured the fight going,” Scott said. “I was really hoping for a longer stand-up fight and actually be able to show my skills but I felt like my balance wasn’t there.

“(Parker) went to kick my left side and I checked it and as I went to return, he swept my foot out and I landed on my butt. From there I had to go into wrestling or else I’m getting jumped on and punched in my face.”

Scott already was a crowd favorite and the support grew louder for the 21-year-old as he gained the upper hand in the match.

“It’s crazy how much support (there is),” Scott said. “I almost forget how crazy it is every time I walk out. Hands down North Platte is my favorite place to fight and it’s because of the crowd.”

Nebraska quarterback Adrian Martinez came up short of a resounding win. Yes, again. After this season ends next week, his future at NU is uncertain.

'I feel terrible for him': Husker QB Adrian Martinez out vs. Iowa, surgery likely after right shoulder injury

Adrian Martinez’s 2021 season is over. Is his career at Nebraska finished, too? That remains an open question for the immediate future.

NU women's basketball coach Amy Williams said it was fun to work with the volleyball program in recruiting Maggie Mendelson. Here's how it worked.

'This is why you come to Nebraska:' After early slide, Huskers have shot to win Big Ten title

The winner of Friday’s match between No. 5 Wisconsin and No. 11 Nebraska will clinch at least a share of the Big Ten title.

A certain local columnist is extremely interested in whether Scott Frost can right the Big Red ship, which indicates a belief it still can happen.

Football, dads, loss and Erik Chinander's place at the small-town heart of the Nebraska vs. Iowa rivalry

Football rivalries are provincial by nature, but those kinds of community roots are universal. In Allison, Iowa, the Chinander boys engender pride.

Frost on Martinez's future: "I don’t think that decision will take too long."

After each crushing loss, media wonder if this Nebraska team will fold up its tent. One game remains, and we doubt we'll see any quit now.

Bradan Erdman controls Chris Renwick during their light heavyweight match at the MCF 21 Salute to Veterans event on Thursday at the D&N Event Center. Erdman, making his first fight in three years, improved to 4-2 in the professional MMA ranks with a first-round knockout.

Shawn Rosenberg, left, tries to avoid a punch from Eric Adams at Midwest Championship Fighting’s Salute to Veterans event Thursday at the D&N Event Center. Rosenberg won on a first round knockout in the match between two North Platte fighters.