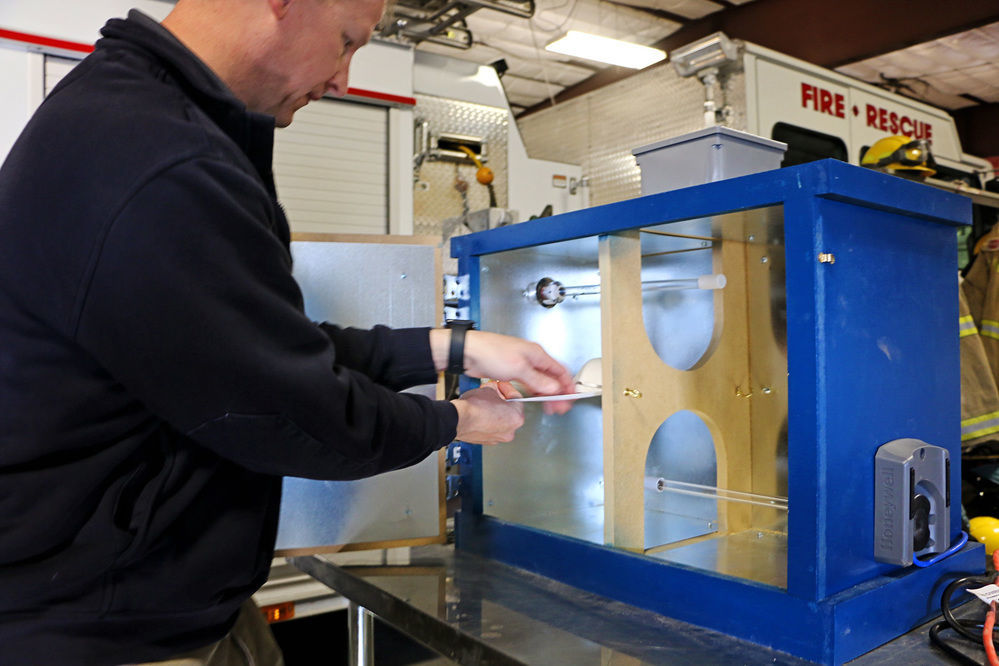 Gering Fire Chief Nathan Flowers demonstrates how a N95 mask is put into a lightbox crafted by two local men. The lightbox uses UVA-C lights to decontaminate N-95 masks, extending them beyond one use. 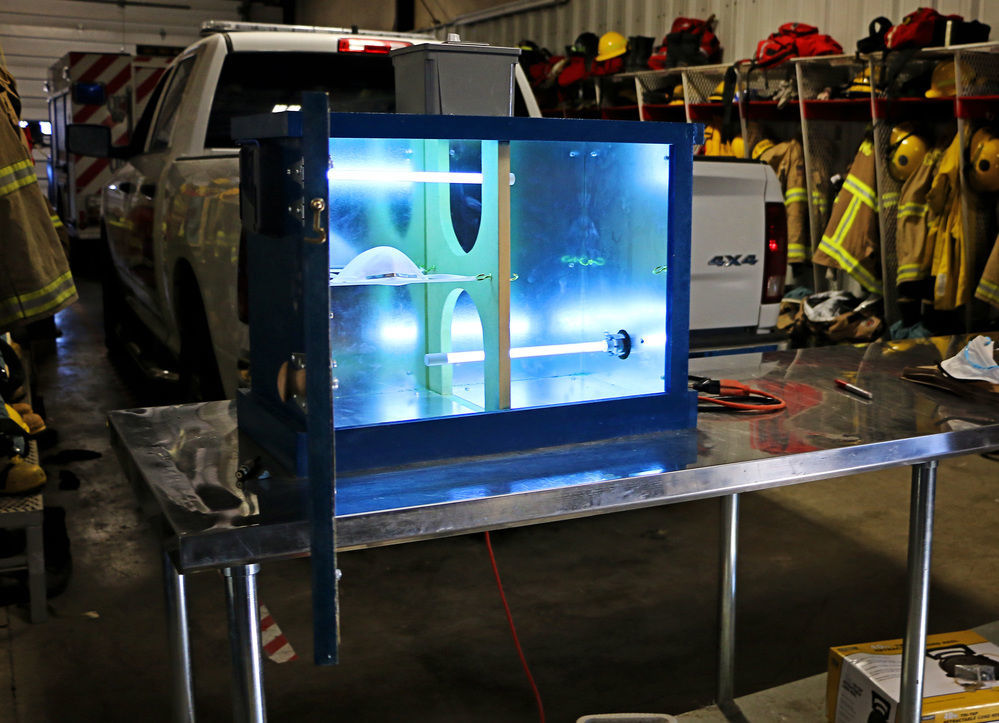 A N95 mask hangs from hooks in a lightbox that is being used by the Gering Fire Department to decontaminate PPE used by firefighters. The UVA-C lights kill the coronavirus, a RNA-based virus.

Gering Fire Chief Nathan Flowers demonstrates how a N95 mask is put into a lightbox crafted by two local men. The lightbox uses UVA-C lights to decontaminate N-95 masks, extending them beyond one use.

A N95 mask hangs from hooks in a lightbox that is being used by the Gering Fire Department to decontaminate PPE used by firefighters. The UVA-C lights kill the coronavirus, a RNA-based virus.

As first responders throughout the area try to address shortages in personal protective equipment (PPE), ingenuity and a willingness to work together quickly brought together a tool to help the Gering Fire Department extended the use of its equipment during the coronavirus pandemic.

In March, the University of Nebraska Medical Center and Nebraska Medicine announced a pioneering effort to decontaminate PPE through the use of ultraviolet light towers. Ultraviolet lights were used to decontaminate the items and the PPE were returned to users for reuse. N95 masks have been in short supply and Nathan Flowers, chief of the Gering Fire Department, said he participated in a webinar that UNMC hosted that provided information and resources to agencies and public health departments.

“Reaching out to other agencies, I realized that there was definitely a need here,” he said.

As firefighters responded to medical calls, the department was also using more and more of its supplies of N95 masks. One Colorado fire department had reported it had created a lightbox that uses ultraviolet light to decontaminate its PPE.

Flowers reached out to Gering High School administration and teacher Justin Reinmuth, who has led students to success in the Samsung Solve For Tomorrow competition.

Reinmuth assisted by reviewing the information provided by the Colorado fire department and UNMC and he consulted with engineers and doctors that he knew through serving on a team with the Samsung Solve for Tomorrow program.

“We started kind of putting our heads together, thinking about who had the ability to do this for us,” Flowers said.

Reinmuth reviewed the plans, making some adjustments from past experience from the Gering High School team working on a project that used hyperspectral imagery and ultraviolet lights to kill weeds and the advice he had gathered.

Reinmuth explained that the UNMC/Nebraska Medical Center is using ultraviolet lights to kill the coronavirus, which is an RNA (ribonucleic acid) based virus. RNA-based viruses “are not alive and they are dead,” he said. “They work like a thumbdrive to your computer. It has all the information to make you sick, but until it plugs into your DNA, it can’t make that data.”

That is what makes decontaminating the masks possible. The goal of decontamination is to kill the RNA-based virus or, if some of it still exists on the mask, to kill the data so that it can’t make a person sick.

For Reinmuth, who calls himself a “belt and suspenders type of guy,” he wanted to ensure that the information that had been gathered for making the portable lightbox would result in an effective lightbox.

“With the pandemic that we are in, there is going to be a lot of false information out there,” he said. “I wanted to make sure, before I gave them, people who I have known my whole life, something, that it works, rather than something that is cool.”

Flowers, through the help of Rick Derr of Action Communications, referred Reinmuth to Mike Beebe, owner of Big Mack, a heating and ventilation company. Reinmuth had determined that the ultraviolet light that needed to be used in the box was ultraviolet-C (UVA-C). UVA-C lights are often used in the medical field for sterilization and Beebe uses UVA-C in the HVAC industry for in-home and business air purification.

Like PPE equipment, UVA-C bulbs have also become increasingly hard to find in response to the pandemic. Beebe said he tracked down the UVA-C bulb needed to make the lightbox from a supplier in Ft. Collins, but he only had two available on the shelf. He was able to get lights from a supplier out of north Texas.

“With the demand, the supplier I talked to said he had the lights on the shelf for years. He sold a couple of lights per month,” Beebe said. “In the week previously, he had sold 70 that week. There is definitely a high demand. You can barely find the bulbs.”

Beebe estimated the cost at $600 per bulb. Beebe donated one of the lights to the Gering Fire Department and Derr donated the second light. For the other materials to make the box, Reinmuth said, Johnson Cashway donated those supplies.

Beebe and Reinmuth crafted the box. Reinmuth estimated the entire project took about four days, put together quickly, yet effectively, to help the Gering Fire Department.

The box is outfitted with a timer and it takes about 23 minutes for the decontamination process to take place. Over time, the UVA-C light actually disintegrates part of the mask, so its only able to be used a certain number of times on the masks. Flowers has set up a process, that documents the firefighter that the mask belongs to, the handling of the mask, its sterilization and then its return to the firefighter. He also wears the proper PPE when handling the masks.

Through the process, the fire department is able to expand the life of its PPE by four-fold, Flowers said.

“Our stock is still limited and we will probably continue to use it up,” he said. “But when you know you have X amount on stock and we just extended our stock up to four times, that’s really useful.”

To use the PPE properly, Flowers said, it needs to be fit-tested, which has resulted in further limitations of the stock. The department continues to have fit-tested stock on hand, but it is limited. Once the department has used up that manufacturer’s mask, which they are currently unable to get, they will turn to a stock of N95 masks that have been donated to the department. The department has extra precautions in place, using extra measures such as using surgical masks and face shields over N95 masks.

It’s been challenging, he said, with fit-tested masks not available and equipment that would allow the department to be fit tested on other manufacturers also unavailable.

Donations of masks and other things to the department has been plentiful, he said.

“The outpouring from the community for first responders has been fantastic,” he said. “I just want to reiterate that we’re OK. We have our proper equipment.”

Asked if there was a way for people to help the department, Flowers urged people to look into the community for other ways that they could help people.

He also encouraged people to shop local and to support local restaurants and other business.

“That’s the backbone of our community. We need to help each other out.”